The days of grabbing an ol' image off your hard drive for use as a spray in Counter-Strike are well gone. 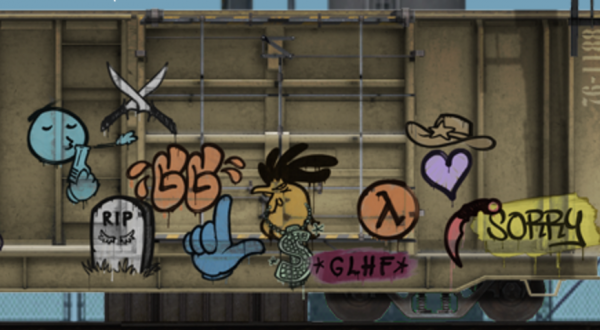 One of the things Counter-Strike purists didn't like about Counter-Strike: Global Offensive was its lack of support for player sprays. Sprays are images you, well, sprays on walls in the game.

The feature has been available in many Valve games, including Team Fortress 2, for years. Sprays have been one of the early ways players could express themselves online in multiplayer games. Spraying clan logos or funny memes after landing good shots or end-of-round saves was a practice many were accustomed to.

Valve has officially brought sprays to Counter-Strike: Global Offensive, but there's a catch. Now called "graffiti", you'll get them as drops in-game and in Graffiti Boxes. They can also be sold and traded on the Steam Marketplace.

The company explained some of the details about the new system in a new FAQ. There are two types of graffiti. The ones you get as drops are monochrome (one colour), whereas Graffiti Boxes can produce multi-coloured patterns.

But here's when this gets even more bizarre; you're only allowed 50 uses for each graffiti once you "unseal" it. If you get a duplicate of a pattern you already have, you'll get 50 additional charges added the original's stock.

You can apply graffiti once per round, or every 45 seconds. You can apply another when you get a kill in a round-based game mode. They last for seven minutes and degrade over time. You'll be able to see the ones you own in the inventory screen, but you can only sell or trade ones you haven't unsealed.

There's a great opportunity here for artists looking to get paid for their work through the graffiti they create. However, positioning this as an alternative to the immense freedom of using any image on your PC as a spray is worrying.