The fourth course of Super Mario 64 follows another classic level theme – this time the Snow level.

Cool, Cool Mountain has penguins, snowmen, and a frustrating icy slide. It’s found on the main castle lobby on the left hand side, behind a 3-star door. It’s a strangely challenging stage despite being early in the game thanks to a few stars that force you to reckon with some instant death bottomless pits… 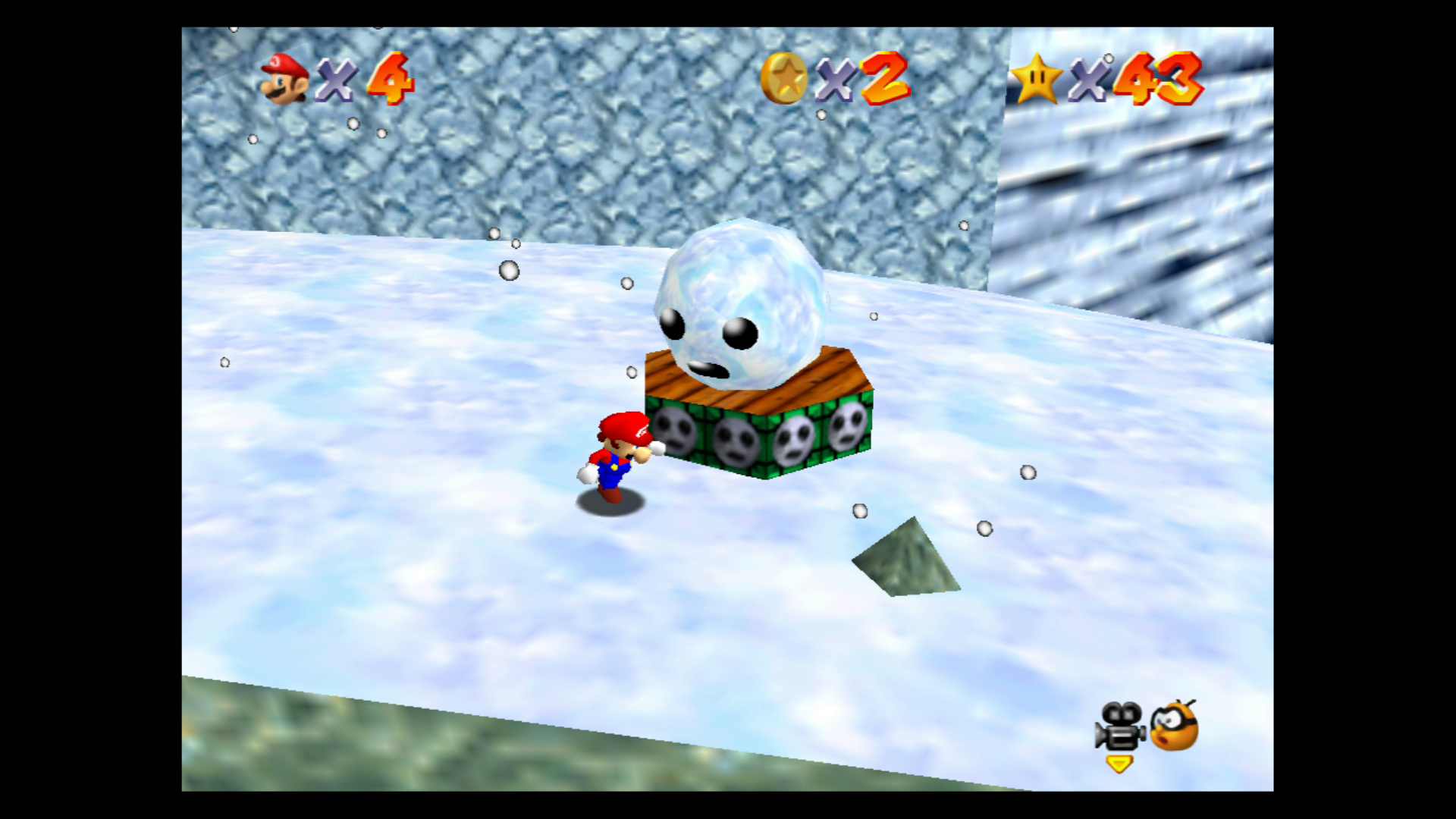 Where you start there’s a house with a chimney – you can jump down the chimney to get inside. There’s a slide here – take it down and make it to the bottom. Keep in mind there’s a handy shortcut through a hidden wall – where there’s a line of coins seemingly hidden straight into a wall, that’s actually a false wall you slide right through. Reach the bottom and then grab the star.

At the start of the stage, sometimes near the roof of the slide house, there’s a little baby penguin. You can pick it up with the punch button. You need to carry it all the way down the mountain – just follow the main path of the course. Be careful not to fall off the edge or drop the baby. Once you get the baby to the bottom, take it over to the mother Penguin and she’ll reward you with a star.

Now we need to return to the slide, so hop down the chimney again. This time you’re racing a penguin on the slide. If you use the hidden shortcut or try to take a shortcut by dropping off the side of the slide and landing on a lower level, the penguin will act like Koopa The Quick in Bob-omb Battlefield and tell you that you cheated. This one can be a frustrating one – but keep in mind that you’ll speed up on the latter section of the slide, so don’t get sloppy if the penguin is ahead of you. It’s more important to stay on the slide to avoid dying.

The red coins this time are just generally placed all around the level, despite the name suggesting they might be more specific. Here’s where they all are:

In this version of the stage, a snowball will spawn at the top of the mountain. Push it down the slide, right the way around the mountain. Eventually momentum will carry it. Get down to the Snowman head and wait for the ball to come down and join the head to create a full snowman – who will then gratefully give up the star.

There’s a cannon at the bottom of the mountain – talk to the pink Bob-omb to activate it and then get in the cannon near Mama Penguin. Aim at the ledge cross from the cannon, below the path up the mountain – you want to catch the tree to stop yourself from flying to your death. Follow the narrow path here avoiding or defeating the enemies, and long jump across the larger gap where coins make an arrow. Keep following the path – you’ll need to wall kick twice, once off a successful triple jump, to reach the top of the stage and the star.

This stage has a solid 154 coins in total, including 105 yellow coins – so it should be quite easy to grab the amount needed to get the star. Be careful not to pick up your 100th coin on the slide, as it’ll just make picking up the star difficult once it spawns.

Next up, you’re swapping chilly weather for chills up your spine in Big Boo’s Haunt.