Red Dead Online’s RP spectrum is riding into the sunrise.

“I’m gonna gut you like a fish,” says Mark. I’ve only known Mark for about 15 minutes, but I’m already starting to think he’s a bit of a wrong ‘un. I mean, a wee fishing trip to the San Luis River sounded lovely, but I’m now getting some serious Billy The Kid vibes from my new companion. He’s got more eyes than teeth, a threatening disposition and a loaded rifle, a Litchfield Repeater if I’m not mistaken, aimed at my head.

I pause, before suggesting that if Mark plans to “gut” me, he’d surely be better doing so with a throwing knife, a machete, or, at a pinch, a stone hatchet. I ponder aloud how messy doing so with the latter weapon would probably be – that, in fact, using such an imprecise instrument might be more hassle than it’s worth – and Mark gets angrier still.

“Shut the fuck up!” he grunts in a curt and exasperated tone. “Don’t be a smart-arse!” 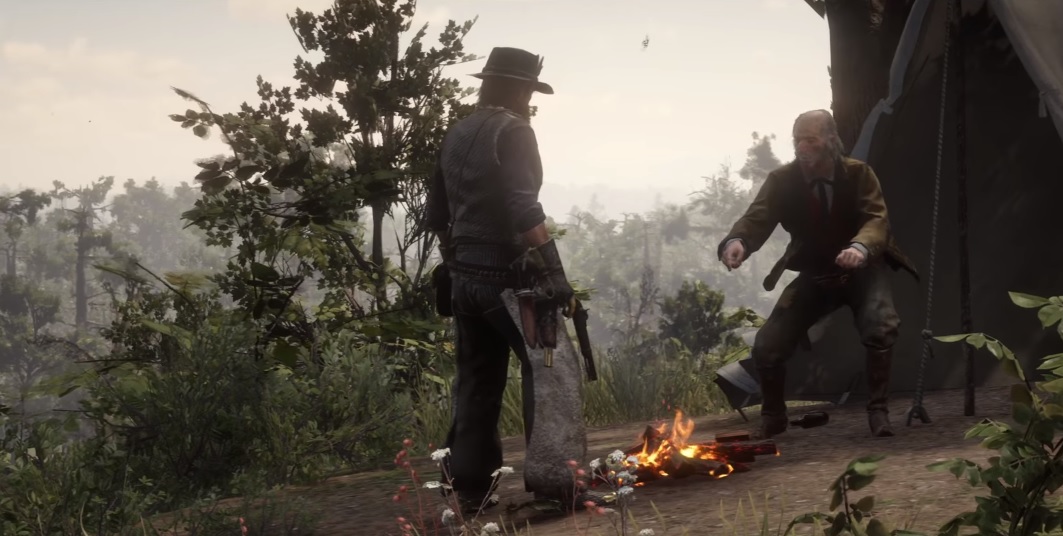 In a flash, he puts one between my eyes. I slump into the drink, my lifeless corpse now sagging among the Largemouth Bass, the Lake Sturgeon, and the lure I’d cast moments before. Death by semantics, now there’s a new one.

What isn’t new during my always well-intentioned but so often ill-fated Red Dead Online roleplay endeavours is the outcome. I’ve lost count of the number of times I’ve tried and failed to make pals willing to carve a nuanced narrative with me. Heck, I’d settle for a passing acquaintance at this point and, to be fair, my run-in with Marky boy was by no means the worst encounter I’ve had in the western crime sim’s sprawling sandbox.

Since its console launch in October last year, I’ve sought Westworld-like set-pieces in my Red Dead Online roleplay endeavours – but have almost always been served Django: Unchained. Violence. Blood. And death. Oh, so much death.

Like the time I tried to start a native American resistance party and was ultimately hammered to a tree by my peers. Or the time I was hired as security for a travelling caravan and was pushed in front of a train “for a laugh”. Or the time I was enlisted as a cleaner at Braithwaite Manor, forced into a cupboard and showered with sticks of lit dynamite, while the assailant repeatedly chanted ‘Remember, remember the fifth of November’ in a shrill Yorkshire accent. That was really fucking weird. Mostly because the scenario unfolded in the middle of June. 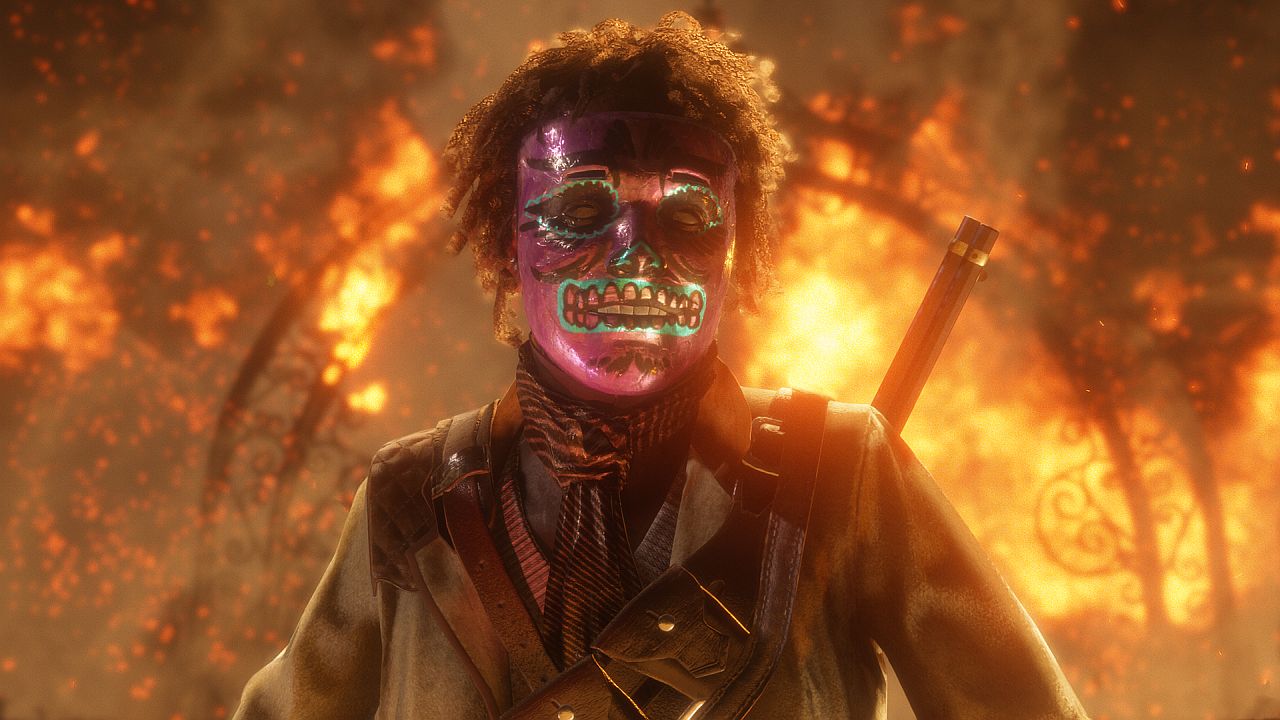 But that’s been my experience of the Red Dead Online roleplay scene so far. Unlike its modern-day crime simulating cousin, Grand Theft Auto 5, players seem hell-bent on destruction in RDR2, regularly eschewing realism and serious RP in favour of chaos and gratuitous slaughter. Don’t get me wrong, it’s funny, sometimes hilarious – I still smile at the thought of my sadist Yorkie Guy-Fawkes-in-June demise – but it’s also a shame because Red Dead Redemption 2’s world is ripe for more sophisticated, inventive, player-driven storytelling.

The arrival of Red Dead Redemption 2 on PC, and its server-based offshoot, Red Dead Online, could, should, and I’m certain will, open the stables for western-inspired roleplay like never before. FiveM, the open source community modification for Grand Theft Auto 5, has already announced RedM, a Red Dead equivalent that’s due at some point between now and 2020, possibly in-time for the game’s proposed release on Steam later this year.

Designed to allow mods on the server/client side of operation, FiveM works independently of Rockstar’s GTA Online besides validating the player’s copy of the game prior to launch. In May, FiveM surpassed 50,000 concurrent users, in a month where Steam’s GTA 5 peak was just over 108,500. According to its creators, RedM will leverage the CitizenFX framework and RAGE/M technology to create something similar with Red Dead Redemption 2 (assuming there are no DRM restrictions), wherein keen roleplayers can create their own servers or simply join a range of modded game worlds, each with their own quirks and unique spins on the original game’s formula.

Better still, a huge portion of FiveM’s servers can house up to 128 concurrent players, and its developers are constantly working behind the scenes to keep that number growing.

We're announcing RedM for Red Dead Redemption 2 on PC, to be launched around a month from the PC release (definitely in time for the holiday season!), assuming no crazy DRM obstacles.

All of which will mean new jobs, adapted weapons, customisable horses, new mini-games, items, quests, you name it; all designed for roleplay, deathmatch, capture the flag-style ventures and whichever other directions intuitive players opt to stretch the blueprint.

Mods in GTA Online are a big no-no, but operating independently of the official servers, FiveM is a great compliment to Rockstar’s vanilla serving, and has provided me with some of the most entertaining experiences I’ve ever had playing video games. The ability to befriend, to lie, to cheat, to deceive, to conspire with real-life players in a world as rich and fulfilling as GTA 5’s San Andreas is an absolute joy, and thought of doing something similar in the Wild West truly excites me.

For example, one of the most entertaining servers in FiveM at the moment is RottenV, an in-development mod that turns Los Santos into a free-for-all zombie apocalypse. Within, players are tasked with securing check-points and safe zones, gathering resources, completing player-made missions, and, all the while, ridding the city of its roaming undead. RottenV is mostly a zombie PvE mod, but the addition of voice chat adds inadvertent roleplay elements to its sprawl – all underscored by the fact getting bitten by the undead transforms you into one of them.

To this end, there’s no reason why a roleplay-flavoured Undead Nightmare-style server wouldn’t work in the current framework, with Death, War, Pestilence and Famine all returning as high-powered mounts. Just the thought of exploding heads and igniting enemies atop an ethereal stead sends shivers down my spine and butterflies into my stomach. Mark from the San Luis River is shitting himself, I’m sure of it.

Another popular branch of FiveM is its modded car racing scene, where players meet up, race and trade cars, akin to the early Fast and the Furious films. Something similar could undoubtedly work in Red Dead Online with tricked out horses, and, speaking of movies, just imagine what intuitive modders could do to replicate the spaghetti western genre in-game. So much of roleplay is non-violent too, so aping flicks like Brokeback Mountain could make for an interesting use of a game so closely associated with death and violence. 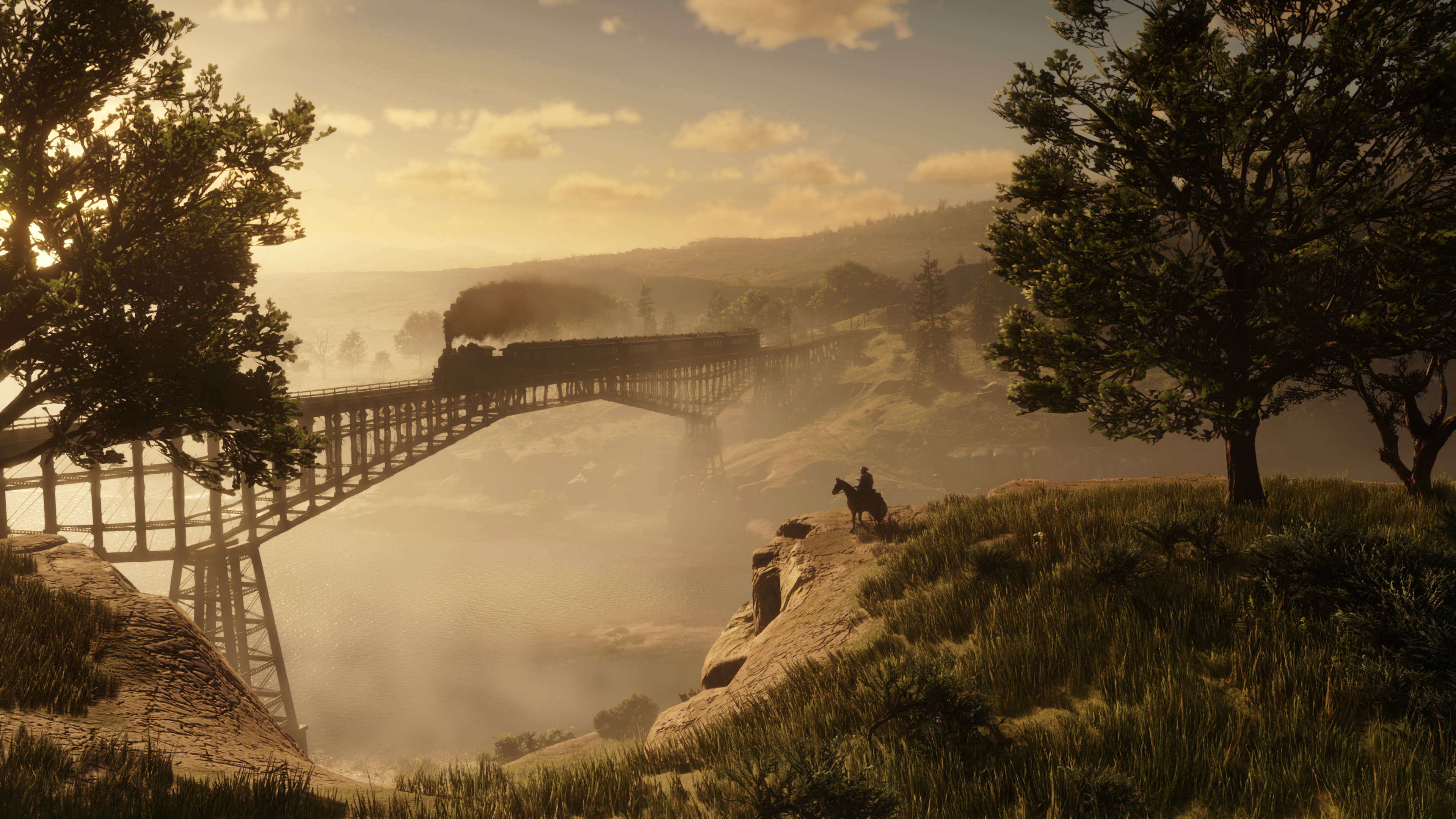 Which is one thing I’ve grown to love about GTA 5’s roleplay scene. Using Los Santos and beyond as a playground for non-combative exploration is a wonderful and refreshing experience. The idea of doing the same in a such an idyllic, picturesque environment without the constant worry of being gutted like a fish with a single-barrel rifle is exciting.

To be fair to the barely-functioning Red Dead Online roleplay scene as it stands now, it does at least exist. Players are willing to try it, often very violently, and that’s more than can be said about GTA Online’s generic servers. Between being stalked by rocket launcher-toting trolls, compulsive hackers and pseudo MCs bent on profanity, San An can be a daunting place.

Red Dead Online, in my experience, is a little less full-on, and while there’s nothing wrong with adopting an aggressive approach – I wasn’t there, but I understand the time period was a bit of a nightmare – the potential of its roleplay spectrum, from a storytelling perspective, is colossal.