PC graphics powerhouse Nvidia has been pushing two tech jargon-sounding features as the future of gaming, but DLSS is no mere buzzword – it’s rapidly becoming a feature that is quite literally game-changing.

DLSS is short for Deep Learning Super Sampling – hardly the most catchy or revealing name for a feature that can have such a stunning impact to game performance and even visuals. Over on console this would probably be given a more marketable name, obviously – but on PC the nerd credentials are fully embraced. Unlike blast processing, DLSS isn’t a sham – it’s real, it can be used right now, and it can seriously improve your PC’s performance in compatible games. So what is it?

What is DLSS? What Nvidia’s new graphics processing feature actually does

According to Nvidia, Deep Learning Super Sampling “uses the power of AI to boost your frame rates in games with graphically-intensive workloads.” In layman’s terms, this basically means it offloads some of the image processing that every frame that a game outputs has to go through to artificial intelligence, thus reducing the strain on your graphics hardware and therefore allowing players to push games further on the same hardware.

That increased level of performance can be simply used to enjoy higher and more stable frame rates while maintaining the same settings you usually would, but you can also pay that thus unused power forward, cranking up a game’s graphical settings or resolution to make use of the power while still maintaining an acceptable frame rate. The choice is ultimately up to the player and your personal preference.

It’s difficult to overstate how much DLSS can really bolster the performance of games. While it has its downsides – nothing based on machine-learning and approximation will ever be exactly as good as everything running in real time – it makes a balance of visuals, performance and high-end features like ray-tracing realistic without linking together multiple graphics cards in a PC worth 5 grand or more.

It’s all well and good talking about ray tracing and fancy 4K displays with G-Sync or Freesync or whatever – but unless you can run the games at that resolution and run them well, those features are worthless. That’s why DLSS is so important: it’s actually allowing players to run games at acceptable speeds with these features on – and without going to overly-complicated multiple GPU setups.

The element of processing that’s off-loaded is hinted at in the name: super-sampling. Super sampling is the act of rendering a game at a higher resolution than it’s actually being played at; say rendering a game at 4K, but then crushing it down to a 1080p display. While you can’t see the level of detail you might see on a 4K display this way, a super-sampled image typically has a lot less of the jagged, rough edges that you so often see in games.

Graphics cards have supported super-sampling for a long time, and some games even have the feature built-in. The problem with super-sampling is the same as having a 4K monitor, though: at a point, rendering such large resolutions becomes difficult to do without unpleasantly impacting the game’s performance.

That’s where the deep learning part comes into play. Even if you’re not particularly tech nerd minded you’ve probably heard this term thrown around – it’s when a specific application is run many times by a supercomputer, each run contributing some learning to the algorithm. In the case of DLSS, Nvidia trains its systems on individual games, super-sampling each game repeatedly until the algorithm behind it all is sickeningly efficient at taking the raw image spat out by the game and improving it.

In this instance, it typically infers super sampling – so it takes a lower-resolution image and uses the deep-learned techniques to make that image sharper to have the appearance of the same image had it been natively rendered at a higher resolution. This is why DLSS is a feature that has to be enabled on a per-game basis, too – that learning must happen for each individual compatible game.

Because all of the super-sampled nature of the image, games will require less anti-aliasing, the taxing image processing feature that’s designed to remove those nasty previously-mentioned ‘jaggies’. This is primarily where DLSS offers a real bonus in an increased image quality and lowered frame rates alike. That’s vital, especially because ray tracing is becoming such an important part of graphics hardware going forward.

DLSS in action: how much it improves games

The results can be seen in real games right now. Final Fantasy 15 was one of the first games to boast DLSS support, and it remains one of the most impressive demos. At maximum settings and running at 4K the game will struggle to hit 60fps on even the higher-end RTX series graphics cards, but add DLSS into the mix and the frame rate jumps from hovering between the mid 40s and low 50s right up to comfortably above 60fps.

Anthem, a game that has struggled terribly with performance and optimization on PC, sees uneven but welcome improvements that will boost frame rates by anywhere between 15 and 50%. Anthem is a gorgeous game – that’s the one bit of it that arguably isn’t fatally flawed – but with DLSS enabled you actually get the performance, too, even if it remains unsteady.

It’s not all sugar and rainbows, obviously. DLSS is an emerging technology, and so it’s got the teething problems you’d associate with that. For one it isn’t available in every game (the full compatibility list is below), nor in every resolution. On top of that the results can sometimes be less pronounced or successful in some games than others. In some cases, such as Final Fantasy 15, DLSS can actually present an image that arguably looks a little better – but in others, there’s a definite downgrade, though not as much as you’d suffer turning settings down to have access to ray-tracing or a higher resolution.

Nvidia admits all of this – even that in certain scenes DLSS can lead to blurry frames or a lowered texture quality, and sometimes a DLSS processed image will look quite different to an actual native 4K output, albeit still good. Nvidia’s answer to this is to remind that the technology is being updated all the time. Given it’s a software-based solution, the ceiling for performance is suitably high – and now rival AMD is getting in on the action with its own ‘image sharpening’ effect, which is effectively the same thing – meaning there should be some healthy competition. 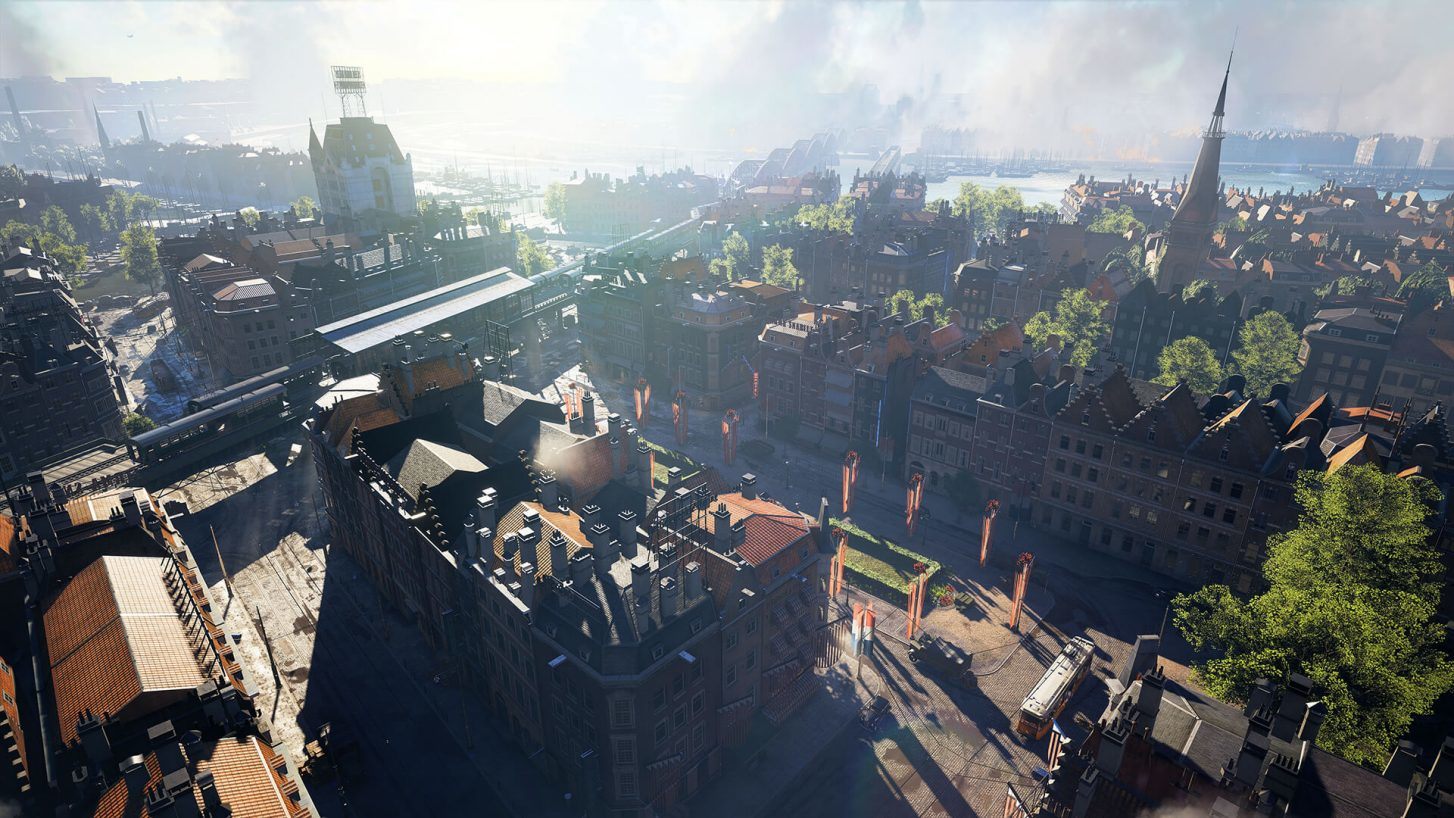 DLSS and Ray Tracing: a match made in heaven

You might be wondering why DLSS has suddenly shown up now. Similar techniques have been common on console for years – many PS4 Pro and Xbox One X games only manage to reach 4K resolution because of checkerboarding, another fakery reconstruction technique to boost a game’s visuals – but on PC, DLSS has arrived with close proximity to another major new feature, ray tracing. In many ways, the two go hand-in-hand.

We won’t go into why ray tracing is so impressive and important here – we have a separate ray tracing primer for that – but the short version is to say that ray tracing is definitively the future of real-time lighting in games and other 3D graphics applications. Everything can benefit from ray tracing – from Minecraft to kitchen design software, or an aging game like Quake 2 to a modern behemoth like Battlefield 5 – the difference is significant. The problem is that even with dedicated ray tracing cores in hardware like the Nvidia RTX series GPUs ray tracing is a performance annihilator, especially at high resolutions.

Take Battlefield 5, for instance: the large-scale multiplayer shooter absolutely tanks in frame rate with ray tracing enabled. Without DLSS, you’ll likely need to drop to 1440p or lower resolution in order to see a solid 60 frames-per-second, even on the super-powerful RTX 2080 Ti hardware. With DLSS enabled, however, you can actually bump the game up to full 4K and maintain Ultra settings and get pretty close to a solid, constant 60fps – which is very impressive. Nvidia says you should be able to see a performance boost of as much as 40% in Battlefield 5 – and it’s certainly a feature that is practically required to make the gorgeous ray tracing viable without seriously lowering your settings.

DLSS makes use of the dedicated Tensor Cores found in Nvidia’s latest graphics card technology, meaning you need one of the new ‘RTX’ series GPUs to take advantage of the feature – much the same as with ray tracing.