It’s occupying the same ‘big early to mid-year Sony-published exclusive’ release spot that games like God of War, Horizon: Zero Dawn, Uncharted 4 and Bloodborne have taken up in previous years, putting a lot of pressure on a game that is, no matter which way you look at it, an underdog. Reception towards the game among press and the public has been somewhat flat – the initial 2016 E3 reveal came out of the gate strong with huge swarms of intelligent, vicious swarms of zombies, but nothing we’ve seen since has held up against it.

But the four-odd hours I spent with the game at a preview event in Sydney, Australia – the game’s first stop on a world tour of press previews – showed a game with real potential. It’s janky in places – more so than we’ve come to expect from a Sony published title – and I don’t see it being a Game of the Year contender, necessarily, but I developed a certain fondness for it. This is a game that swings hard, often with a huge lead pipe in hand. 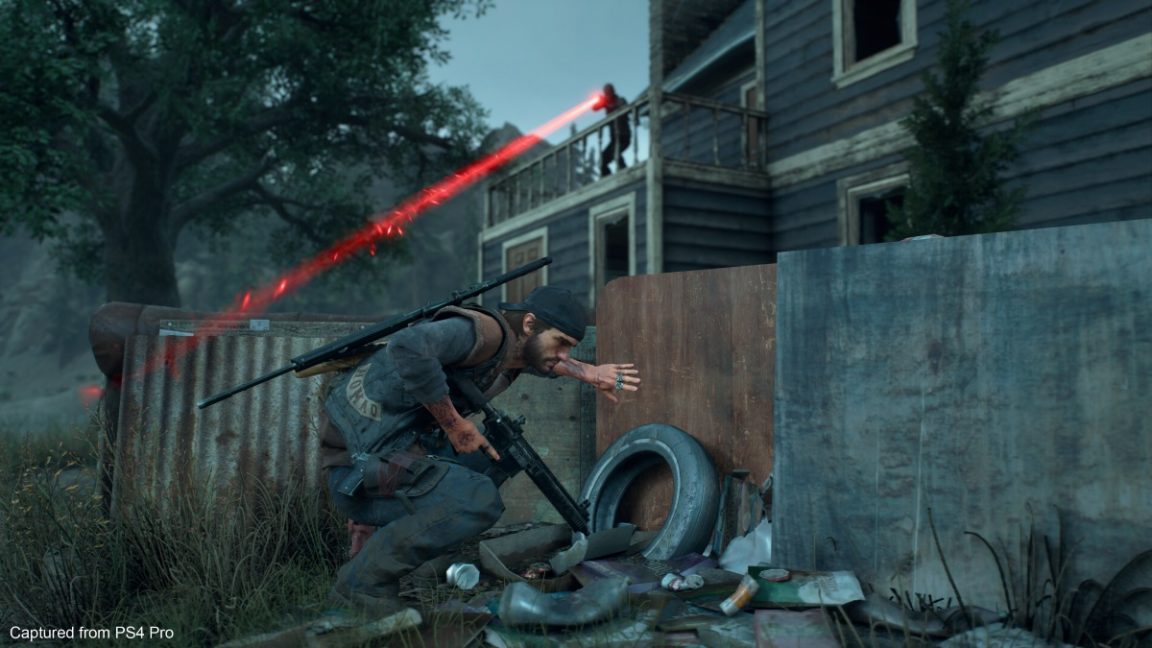 “It’s a clumsy game, but it’s charming and big and increasingly engaging as it goes on”

The preview build opens with a long cutscene introducing the main character, Deacon St. John, at the outset of the global pandemic that will eventually turn millions of people into ‘freakers’, the game’s take on zombies (in our interview senior staff animator Emmanuel Roth said that they don’t like to refer to them as zombies, but, well, they sure look, sound and act like zombies).

During this scene we briefly meet his wife, Sarah who is loaded into a medivac helicopter after being stabbed, and at the end of the cutscene the game cuts to two years later, during which she apparently died. Sarah loomed large over the demo – later I played through a flashback to their first meeting, and one mission involves visiting a memorial site Deacon has set up for her. It’s unfortunate that the most prominent woman in the game is dead before it begins properly, although I would not be surprised if there’s some sort of ‘well we never actually saw the body’ twist here (the demo does not suggest this, but I have my suspicions).

At first, it’s hard not to focus on the game’s less appealing elements. In the opening mission, after a goofy motorbike chase, I find myself tracking a human enemy using my ‘survival vision’ – the standard videogame ‘click the right stick and watch as footprints light up’ mechanic. When I strayed ever so slightly from the path the game was ferrying me down, I hit a ‘leaving the mission zone’ message that demanded I rein myself in, which is always upsetting to see in an open world game. Visually it’s decent, but not as good looking as that initial demo. After a bit of wandering and a few more cutscenes I’m introduced to the melee combat, which is cinematic but a little simple – as I learn throughout the demo, taking a few swings with your melee weapon, rolling and repeating will carry you through many encounters. 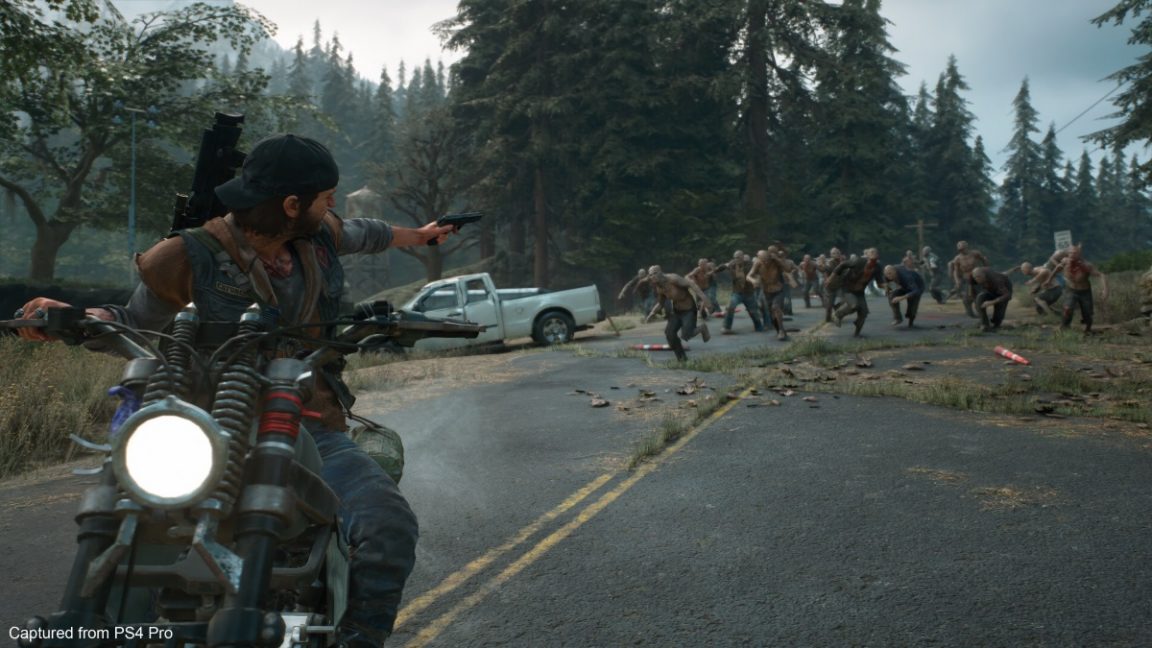 The first freakers I encountered, which popped up during a scripted sequence where Deacon and his old bikie mate Boozer cleared out a tunnel 15 minutes in, were not particularly intimidating. They ran right at me, screaming, and I took them down with a few quick shotgun blasts (by the end of the encounter I had only two shells left – Days Gone is pleasingly stingy with the ammo, which later lent some tension to proceedings). But not long after I encountered a far more interesting variant of freaker, the ‘newt’. The newt looks like a pre-pubescent child, one who hunches on all fours and likes to climb onto roofs and cars. They tend to only attack if you’re in a weakened state, and killing one as it attacked made me feel strangely guilty. There’s a hierarchy to the freaker society, and it’s clear that newts are right at the bottom of it.

For the first hour or so, the demo introduced me to the game’s various components – there’s the rudimentary health pack and weapon crafting you tend to get in games like this, the human enemies are sufficiently twisted, and Deacon (who never takes off his backwards cap) is difficult to warm to, as is the society he’s living in and around the fringes of. Deacon lives with Boozer in a watchtower, but frequently visits surrounding walled-off camps for supplies, missions and bike repairs, where characters mill around gravely talking about how much they miss the American constitution. In these early missions, the standout was a simple battle against an armed group of human mercenaries who are looking to rob Deacon and Boozer. The pistol reticule is huge, meaning that firing with any accuracy over a distance is realistically difficult, and getting hit by a shot takes off a huge chunk of health. Coupled with the game’s low rate of ammo, what could have been a very simple showdown between Deacon and about five other people became rather tense.

After finishing a few early introductory missions, the demo shot forward into later in the game. Suddenly the world felt far bigger – there were long distances to travel between missions, and the open world was full of hazards, side-activities, bandit camps to clear out, freaker nests, roads to tear down, jumps to leap over, and other open-world trappings. 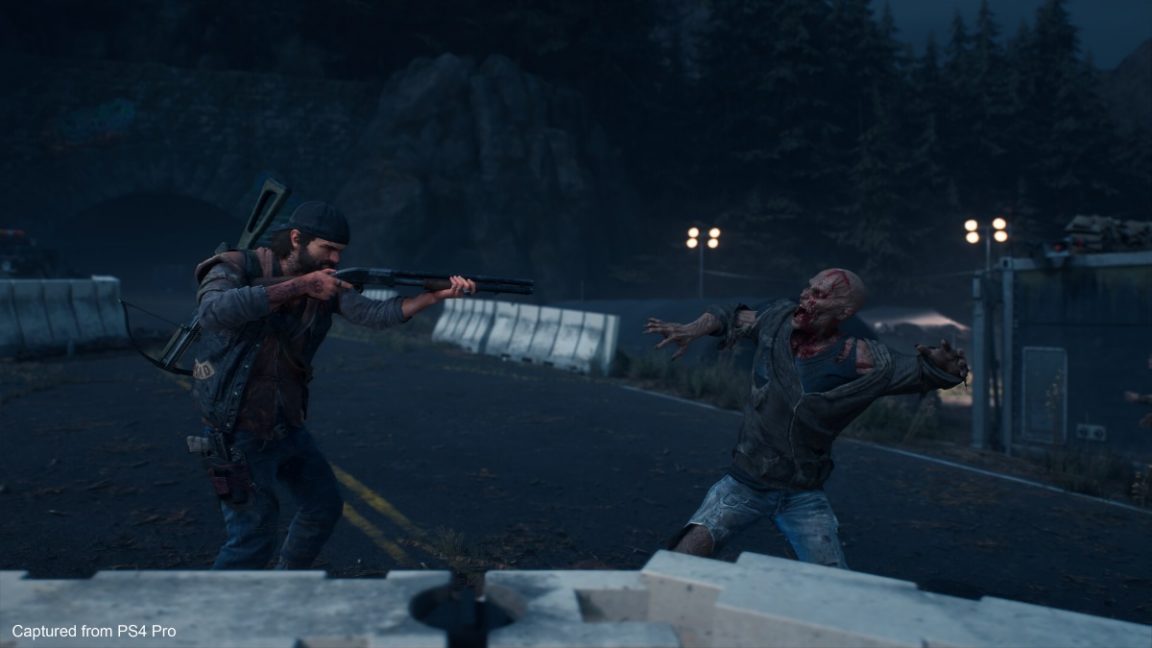 Once the game opens up, letting you explore the fictional setting of Farwell, Oregon, the potential of Days Gone starts to shine through. As I pass through an area afflicted by nests of ‘swarmers’ (the garden variety freakers), I’m told by the UI that taking these nests out will lower the number of freakers in the area. Shortly after, another message lets me know about hordes – they like to hibernate during the day, but will appear at night to feed. I didn’t encounter a horde in my session, but the game puts the fear into me, assuring me that you need to be properly prepared to survive them. It reminds me a bit of the Guardians in The Legend of Zelda: Breath of the Wild, and how empowering it eventually felt when I was able to take one down. There are other kinds of enemies out there, too – I found myself beset by infected wolves at several points, which make for intimidating foes.

“It’s unfortunate that the most prominent woman in the game is dead before it begins properly, although I would not be surprised if there’s some sort twist”

I rode through abandoned towns on my bike, heading to the next objective marker – the aforementioned spot where Deacon set up a memorial for his wife. The missions from here on are more interesting than they were in the early sections of the game. I found myself in tense shootouts against human enemies (and find out that I can set traps, should I happen to find them in the wild), chasing helicopters that are clearly part of a larger conspiracy the game is building up, and searching towns for survivors while dealing with the freakers and roving gangs that show up. I stumbled across an enemy encampment at one point, spanning a whole small village, but only managed to clear about half of them out before realising that I lacked the resources to get the job done right then. Wherever I went, I found myself being pulled towards new, interesting activities. I started to imagine spending a lazy Saturday afternoon exploring Farewell, slowly improving my stats and ticking items off my checklist – there’s a certain appeal to it.

Gun fights against other humans were continually compelling, and near the end of my session I ended up in a boss fight against an infected bear that I needed to lure near explosive barrels to deal with. This sort of ludicrous action hints at how big and crazy Days Gone could get, and throwing all my explosives at the damn thing until it finally died was satisfying.

Yes, there’s still plenty of jank and a lot of weird design choices. Deacon can’t swim, for instance – get him in deep enough water for just a few seconds and he’ll immediately die, throwing you back to the last checkpoint (which ended up being beneficial, as my bike had run out of petrol and had its engine die far away from any point where I can refill or repair it). It’s disappointing to see that fire doesn’t propagate, and that Deacon’s pathfinding is awkward when he encounters ledges that he should reasonably be able to climb, and that the game leans on tired ‘graffiti’ environmental storytelling. In that mission with the bear, the explosive canisters did not reset between deaths, making each subsequent attempt more difficult.

But here’s the thing – I played for four hours straight, and never got bored. If the preview event hadn’t ended, I would have been quite happy to keep going. There’s something here. It’s a clumsy game, but it’s charming and big and increasingly engaging as it goes on. I even started to come around on Deacon a bit the more he was fleshed out. Days Gone might not be another immediate classic, but there’s more to it than I expected.