Hunt: Showdown is part of a new breed of shooters that continue to push multiplayer into uncharted territory.

Hunt: Showdown does this the same way PUBG did it; by offering its own interpretation of existing systems and creating a few interesting twists of its own. The result is an original experience that has the potential to be great, but is sadly held back by a myriad of problems.

The setup for Hunt: Showdown is relatively simple. Five teams of two (or ten solo players) spawn at different points of a map about a quarter of the size of PUBG’s Erangel. The ultimate goal is to locate the level’s boss, fight it, claim the bounty it drops and extract. But it’s not so simple.

Hunt: Showdown is simultaneously a PvE and a PvP game. There aren’t that many players, so you’re going to be running into AI enemies for most of the round. These aren’t MOBA creeps, however. They’re not there to inflate your XP bar while you wait for the real fight to begin. They’re often deadly, and can quickly turn a regular fight into a clusterfuck when you realise you have to fend them off and worry about other players at the same time.

If you stop to examine these enemies, you’ll see everything from standard angry zombies to truly unsettling Lovecraftian abominations. They’re easily alerted, and a 1v1 fight you think you have under control quickly and easily backfires if you manage to aggro a few too many of them. Certain enemies are, for lack of a better term, special zombies that take many more shots to kill and are are generally more terrifying and deadly than the standard types. (If you’re after detailed advice for Hunt: Showdown, we have a guide right here). 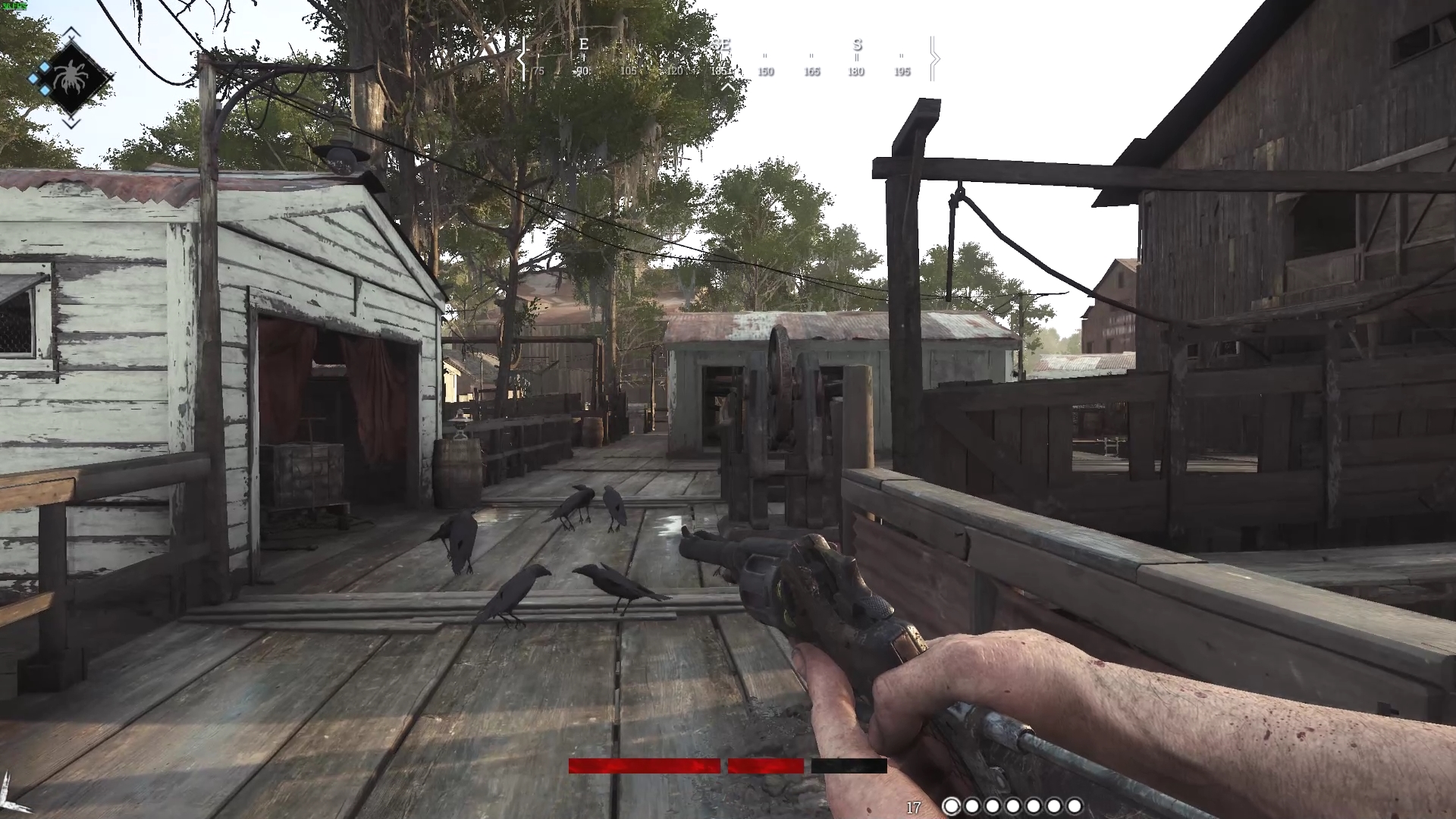 Before you start queuing up for a match, you get to choose which boss you want to fight and pick the time of day. When you load in, your first order of business is locating the boss, which you do by interacting with up to three clues scattered around the map.

An ability called Dark Sight, a Batman detective vision-style ability, highlights these clues and guides you to them. Everyone has Dark Sight, and they’re all trying to find the same boss. Each clue you discover narrows down the boss’ location, but you don’t have to interact with all three.

Depending on where you spawn at the start, you may already be close to the boss. If you walk into any of the compounds in the world and discover it, you’ve essentially triggered the end-game at the start.

I’ve also seen players correctly deduce the boss’ location after only uncovering one clue, but this comes down to luck more than anything, because there’s no way to accurately predict where the boss is going to be.

You’re not spotting tracks or sniffing out clues. This is no Monster Hunter. Hunt: Showdown bosses don’t roam around, they’re going to be hiding in some barn somewhere on the map, always indoors.

. Correction: players are notified when the Banishing starts (more on that below), but you can track the fight progress if you’re in the vicinity.

You may be first to uncover the location, but you won’t necessarily be the first to arrive. This has a similar effect to the ever encroaching circle in PUBG, but while that game shrinks the play area and forces players into a new zone every few minutes, Showdown’s version invites everyone to the same party.

What happens next is a proper rush, and it’s then that the game’s real vision shines through. 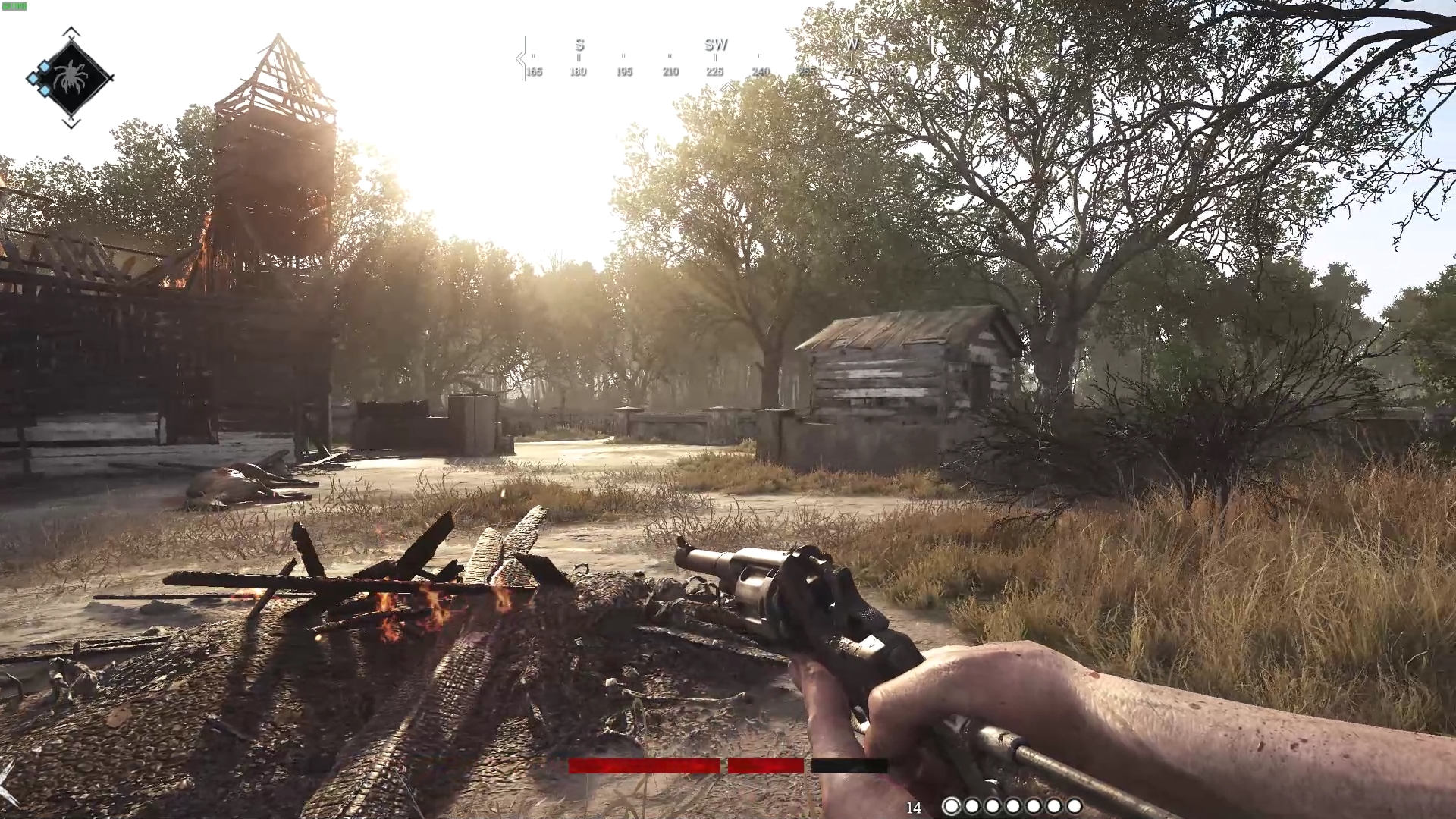 The boss fights themselves are not particularly special, but they’re made more exciting than they are because of how punishing the game is. Bosses can two-shot you. This, in combination with the slow movement speed, prevents you from being able to outrun them most of the time. Coordinating attacks with your teammate helps, but your only real threat is running out of ammo or getting stuck on a log or box somewhere.

Whoever kills the boss has to start a Banishing phase, a process that takes three to four minutes and sees the boss sent to whatever nightmare realm spawned it. It’s only then that the boss drops two tokens, one for each player.

The goal now switches to extracting out – with these tokens – through any of the few extraction points in the level. Because everyone in the vicinity can track the progress of the Banishing, you’re never sure if someone is waiting for the last second to barge in, kill you and claim the bounty for themselves, or if they’re setting up an ambush right outside. Or, even more sinister, camping the nearest extraction point.

Waiting for a firefight to resolve itself before cleaning up the survivors is a situation PUBG players will be familiar with, and it happens here just as often. Except in Showdown, if you lose that fight, that’s the end of your character.

You don’t just lose the round, you lose whatever character you started with. Any progress you made with them is gone. This includes equipment you invested in, abilities you unlocked and so on. When that happens, regardless of the preceding circumstances, your game will end and you’ll get a bit of money and account XP to keep you going.

You will lose, and it will result in losing a high-level character you’ve been upgrading for a while. It’s part of why these last few moments leading up to the Banishing and until one team has extracted are some of the most intense I’ve seen in any shooter.

Mistakes you make will cost you dearly. As the tension heightens in the end-game, the boss’ hideout becomes a bloodbath. You’ll quickly start hoping that your most recent kill was the last of your opponents, and that you’re now safe to make a run for it.

The point is to always extract alive, and you can even do it without killing the boss if you’re just looking to farm AI for XP. Whichever approach you take, you won’t escape the reach of unpredictability in Hunt: Showdown. 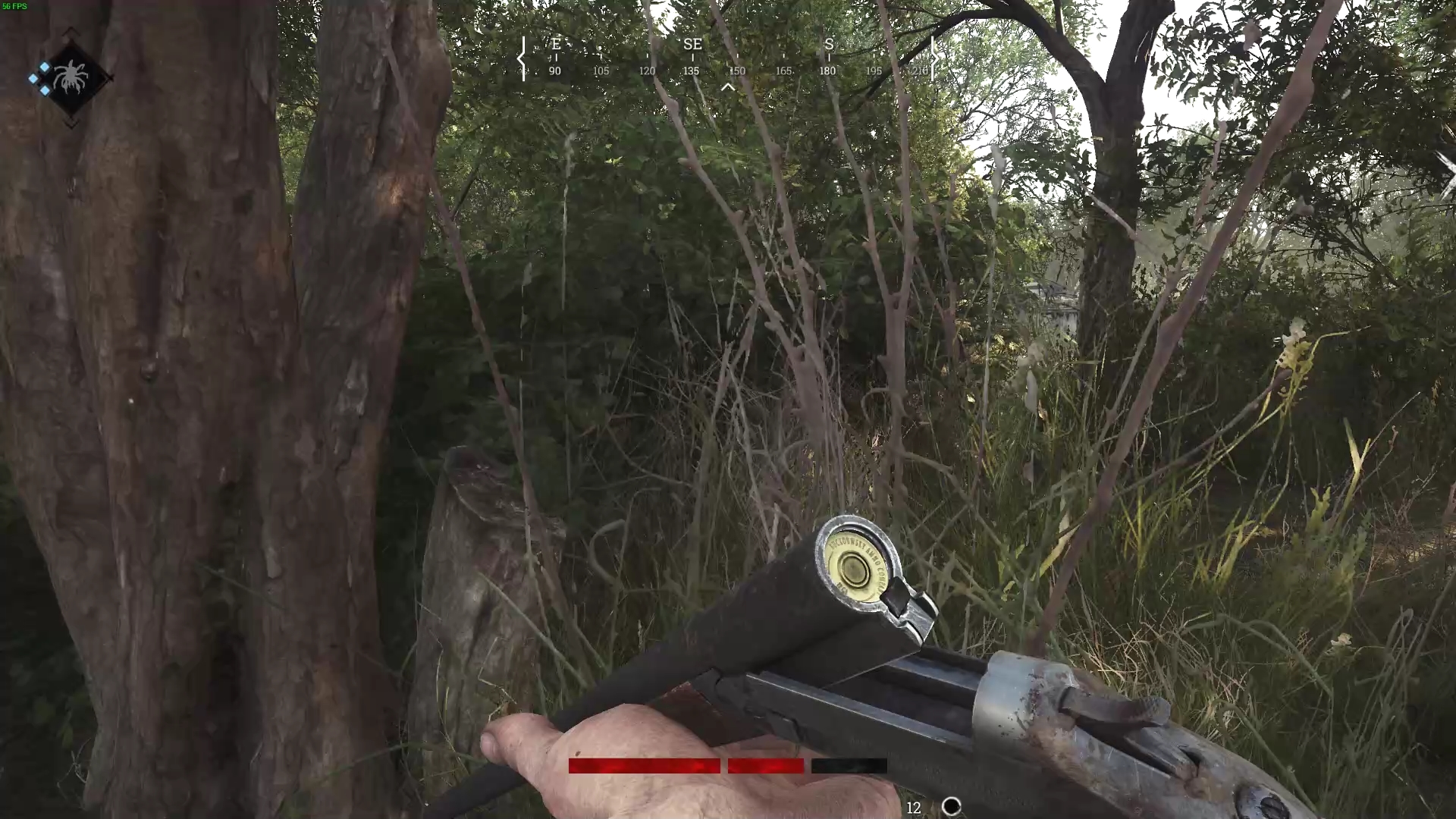 The curse of the CryEngine

There isn’t a lot of variety in Hunt: Showdown’s maps. They’re mostly different arrangements of swamps scattered around dirt roads that lead to derelict barns and shacks. Though you’ll be seeing the same building a few times every match, the atmosphere the environments create won’t be getting old so quickly.

This is further enhanced by the game’s sound design. Creaky floors, heavy footsteps and flocks of birds picking off a carcass give the place an ominous abandoned feel. Like something has gone horribly wrong. The wails and screams of monsters will constantly keep you on edge. The choice of the time period is important, too, because Hunt: Showdown’s 1800s quasai-Victorian-era setting justifies being under-equipped for the job.

In true horror game fashion, ammo scarcity and clunky weapons are the only tools at your disposal against the many horrors that await. This is another part that works really well in Hunt: Showdown, and I could honestly see it spun-off into its own single-player story of 1800s hunters navigating a world of cults and hellspawns in the American South.

But it’s these same limitations that also prevent the game from being as fast or smooth as a competitive shooter requires. The slow reload animations, movement speed and general weight of your character become a burden when they’re thrown into a PvP setting. 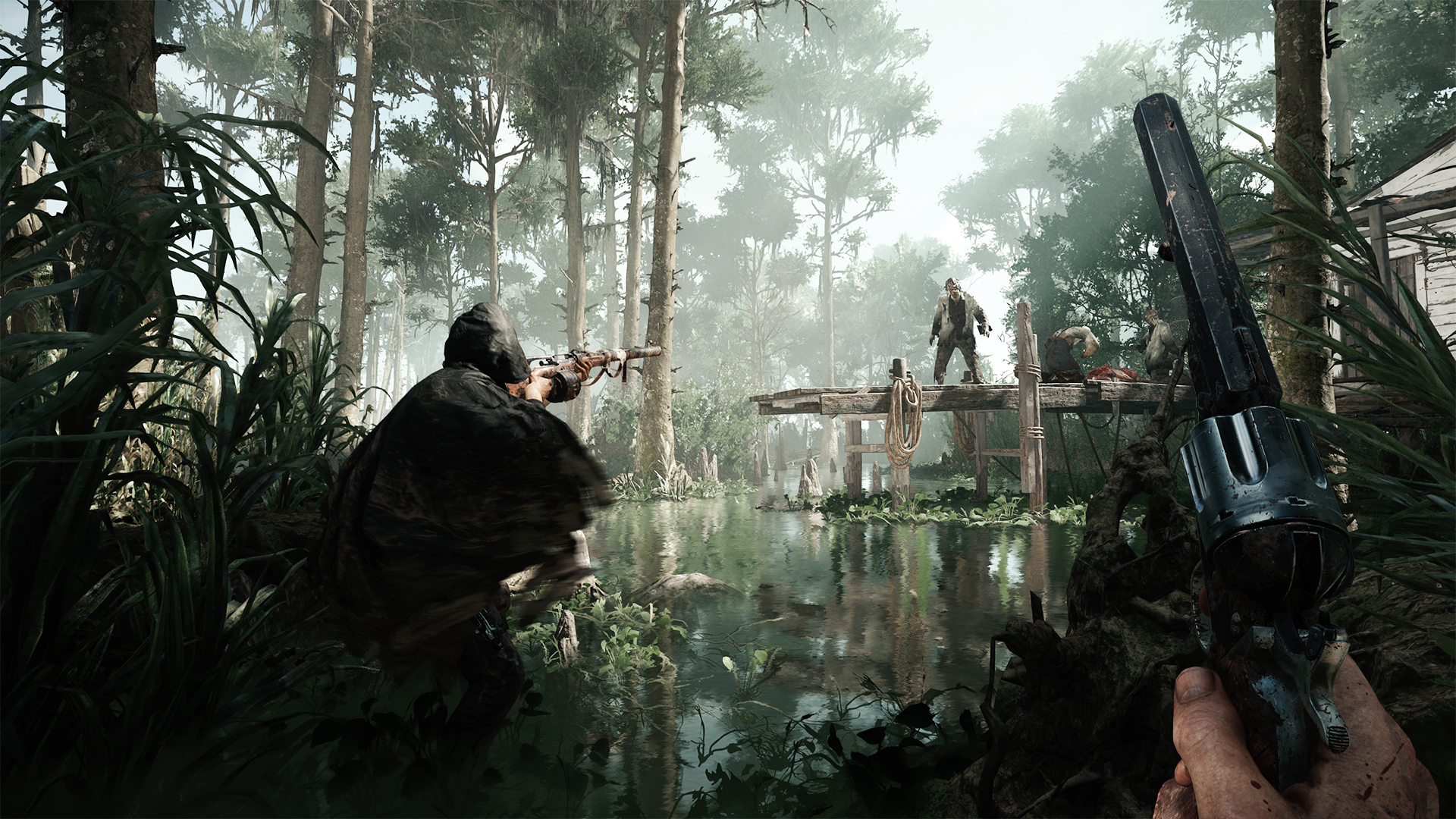 Not every shooter has to be silky smooth, as ARMA and other slower-paced games have shown, but Hunt: Showdown is marred with technical problems that will leave you wondering if some of its clunkier aspects are the result of Early Access jank, or if they’re intended design elements.

All of this is at the mercy of Hunt: Showdown’s shockingly poor performance, which dangerously toes the line between what I’d consider playable and unplayable. The game produces a brief stutter and drops major frames anytime you aim down your sights. This particular quirk would be a problem in any game, but it’s overstated here because Showdown already has performance problems everywhere else.

With an i7 6700 and a 1080Ti, frame-rate hovered around 50fps in 1440p running medium settings, doing anything but standing still is going to drop the frame-rate, and lower 30s will be a common occurrence.

The art team is responsible for stellar visuals, but CryEngine is not doing the game’s performance any favours. This isn’t the first CryEngine game to suffer from severe performance problems. Practically every game that used it in the last five or so years, especially ones that feature more open spaces, runs terribly.

It also shows that Hunt: Showdown used to be a third-person shooter before it was changed into a first-person one. Nothing shows this best than how asinine the game treats the different aim modes.

You hold right click to go into aiming mode, and press shift to go into proper iron sights. There’s nothing particularly wrong with having dual aim modes in a shooter, but having to hold right click and shift every time you want to shoot a distant target is not my idea of fun.

Crytek need only borrow PUBG’s solution to that problem, or implement two aiming modes like Ghost Recon. When you combine this with the performance and technical problems, it starts eating away at what little fun the game can be. 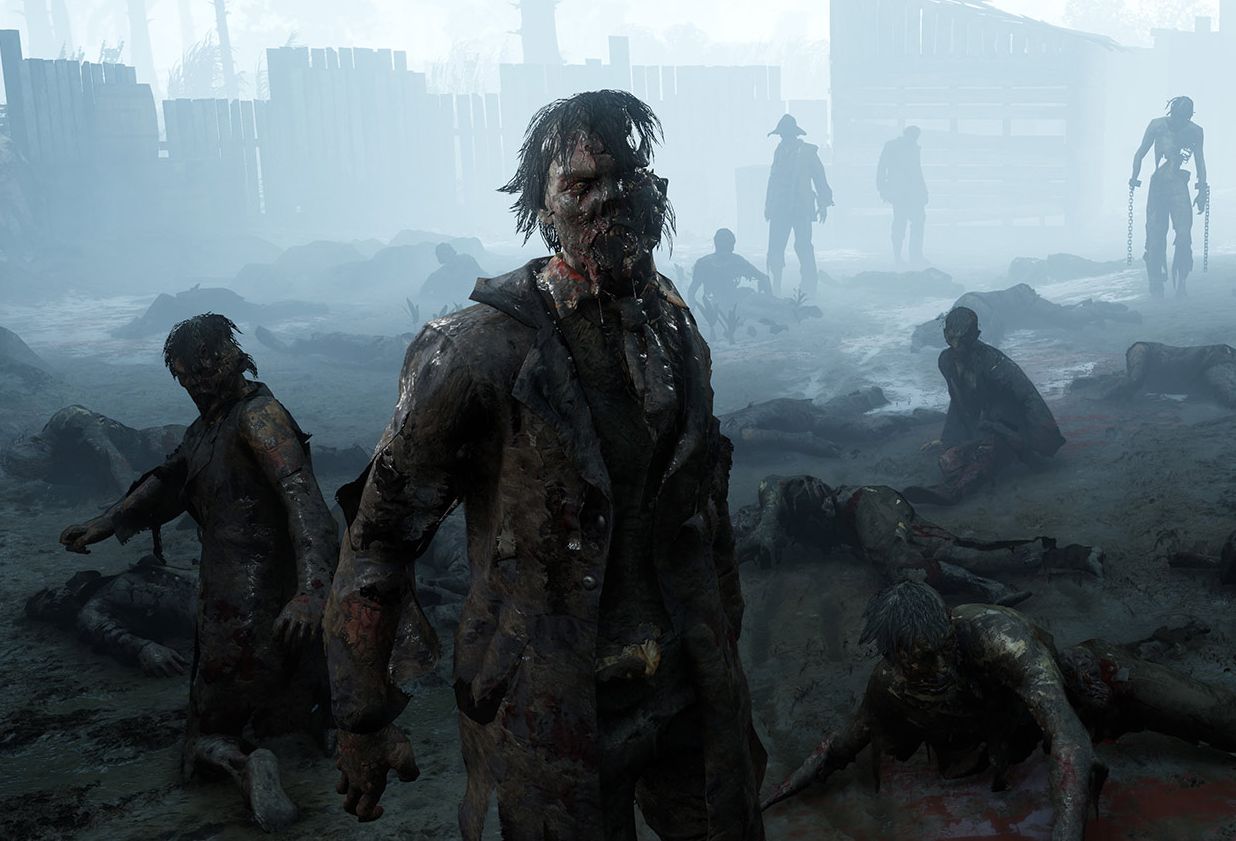 Almost everything that can go wrong in a game has gone wrong for me during my time. Connection failures, lag, teleporting enemies and getting stuck on geometry are just some of the many things I’d seen. I failed to extract a few times because of problems like these, and one time my extraction didn’t register.

Load times are so long that you’re never sure if the game has locked up or if it’s loading in the background. A loading bar or some sort of rotating icon would help in this case, but Hunt: Showdown’s version works for about halfway through the load.

Even if you’re somehow going to tolerate the game’s technical shortcomings, Hunt: Showdown’s core gameplay runs the risk of getting old very quickly. The lack of variety is one thing, but just a few days into Early Access, players realised that there’s no point in taking the risk and fighting the boss. The game is just easier when you wait for someone else to do the work, kill them and take their tokens.

This is something that can and likely will be fixed, but the point is that it’s so apparent that it should have been caught and fixed months ago, well before the game went on sale.

The boss fights themselves, of which there are currently two, also suffer from a very clear and fatal flaw: bosses don’t run out of their arenas, so you can easily bait them to chase you close to the edge of the space where you can be out of reach. Then, you’ll get to land a few free shots before they eventually pull back and you repeat the same dance a couple more times. Not exactly the most terrifying encounter.

The whole thing left me wondering how Crytek could deem this build fit for public consumption. It’s Early Access, sure, but I have never seen a game in a similar state at launch, even for Early Access.

Right now, Hunt: Showdown is a nice distraction. Something you play once or twice every couple of weeks. The content, build quality and depth of play just aren’t there. A lot of times it just doesn’t come together in a satisfying way.

You can have fun with it, certainly, but in this state, I’d say it’s close to two years away from being something you return to regularly.