Video game re-releases and remasters are a good thing, broadly speaking. If we’re going to acknowledge games as an art form, it’s important that older works should remain available for newcomers to the medium to discover. This is why I’m impressed with Microsoft’s efforts to ensure their older titles are backwards compatible and enhanced on their newer hardware, and why it’s important Sony took the time to remake Shadow of the Colossus.

The most vital thing of all is that these older games are treated with respect when they’re recreated for newer audiences. This is the problem with the latest PC release of Square Enix’s Chrono Trigger, one repeated from their PC and mobile ports of Final Fantasy 5 and 6.

Video game fans and Final Fantasy fans are notoriously fickle to begin with, but the change of opinion around Chrono Trigger on PC was whiplash-fast, one of the quickest about-face turns I’ve ever seen en masse. For a brief time Square Enix were heroes, but it didn’t last for long. 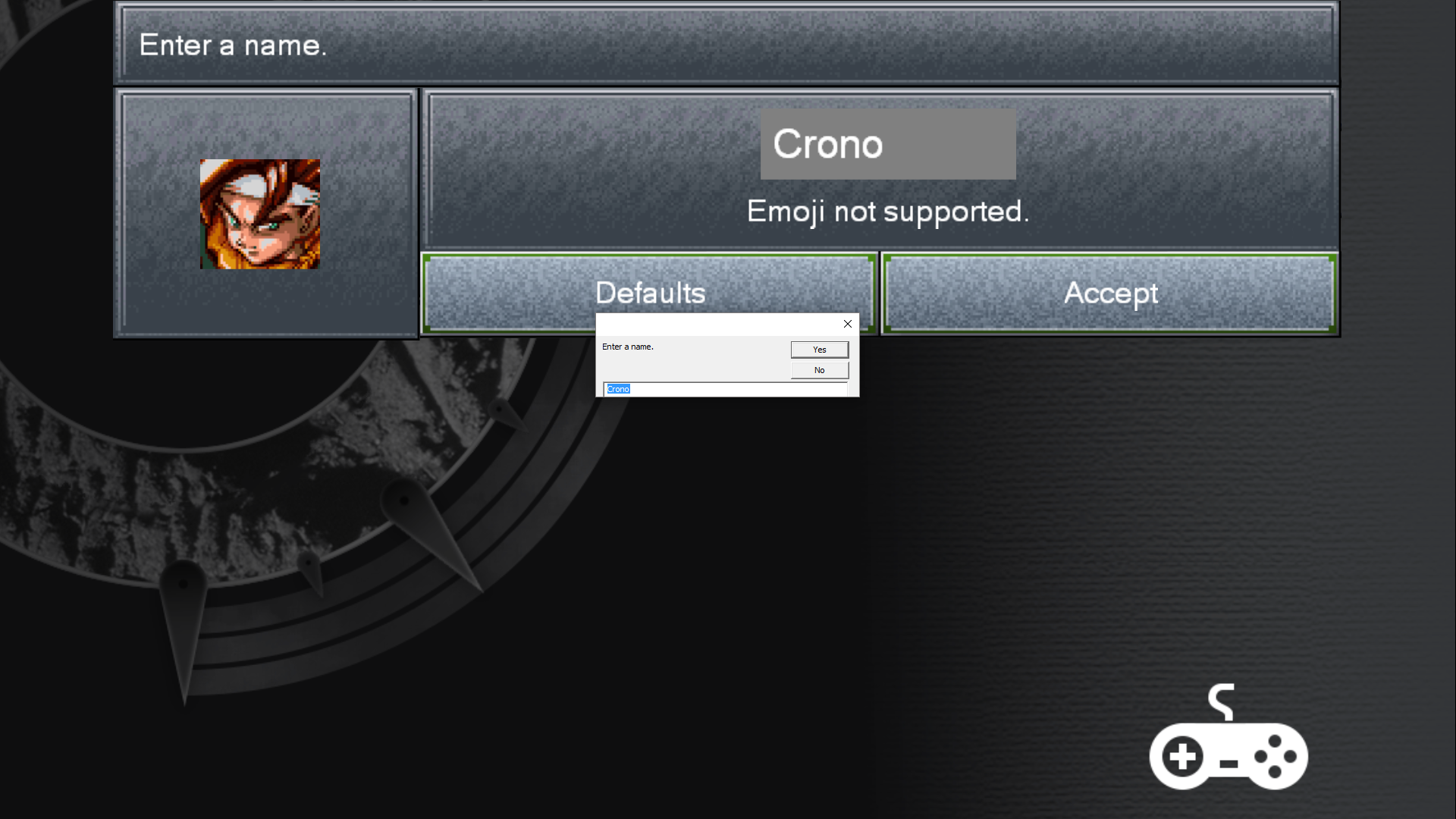 “It’s an ugly, inferior way to experience one of the greatest games of all time.”

It’s perhaps best demonstrated in the tweets of indie developer Fred Wood, who excitedly tweeted ‘WHAT’ alongside a screenshot of the game’s announcement within four minutes of the game appearing on the Steam store. By minute seven he’d purchased it, but by minute ten he was reporting his first doubts.

On minute twelve, the penny painfully drops: “This looks like someone’s first attempt at an RPG Maker game,” he tweets, marking the start of a painful twitter thread outlining just how inept this port of an all-time classic is. It’s definitive in terms of content, but in other areas it falls enormously short.

This looks like someone's first attempt at an RPG Maker game. pic.twitter.com/1cd6YxTdZU

The screenshots posted speak for themselves. Chrono Trigger on PC is a port of the mobile version of the game and brings across all the ugliness that version had to offer. There’s a characterless font, touch-based control elements that remain present even when using a controller, an unceremonious booting to a system-level text input box every time you need to name a character and an awful smudgy vaseline filter that’s applied to the game’s beautiful sprite artwork. It’s a disaster.

I actually don’t know what’s worse: the awful redrawn sprites from Final Fantasy 5 and 6 on Steam or this, the brilliant original artwork filtered and crunched to remove sharpness of pixels, in the process actually removing detail and just generally looking worse.

We see these sorts of filters on emulated re-releases pretty often, of course, but Chrono Trigger uses a unique cocktail of multiple filters on multiple sprite layers that combines to become some sort of unholy assembly of ugliness. Let’s take a closer look: 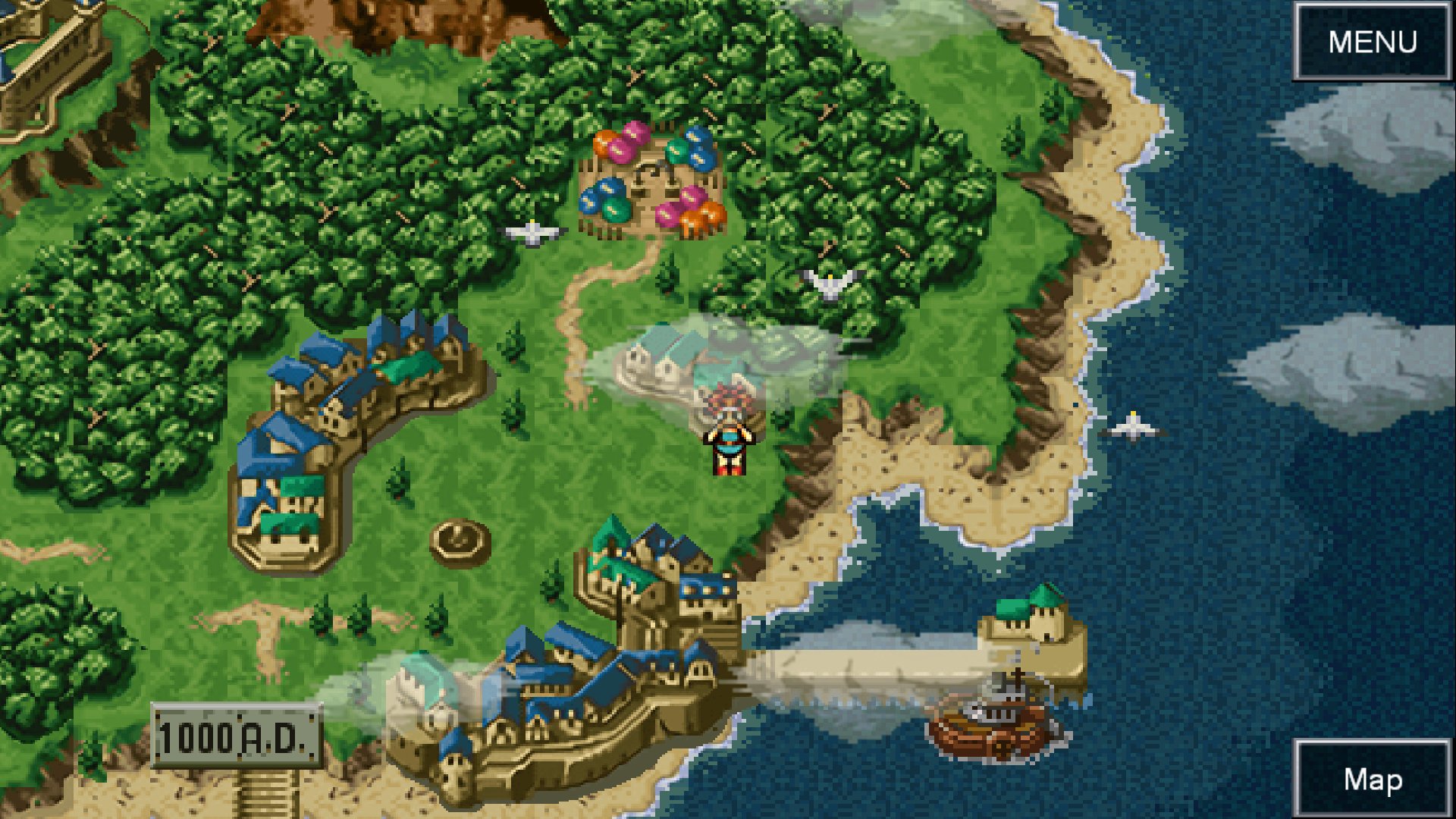 This is a great screenshot to start with. This is an early game area, but just look closer: The filter crushes out detail, but worse is how the tiling on the background is completely messed up, with tiles not stitching properly into their neighbors. Look closely at the forest or beach to see this at its worst.

It’s actually not so bad in this area: in other locations of the game, it looks outright broken. It’s worth noting that the original game also had tiling problems here and there, but whatever’s been done to this version has significantly exacerbated them. There’s a great post on gaming forum ResetEra which features

Then there’s just inconsistency – everything in this screen is filtered except for the boat, birds and clouds, and their sharpness in comparison to the rest of the image also just feels off and wrong. Here’s the same scene in the original game: 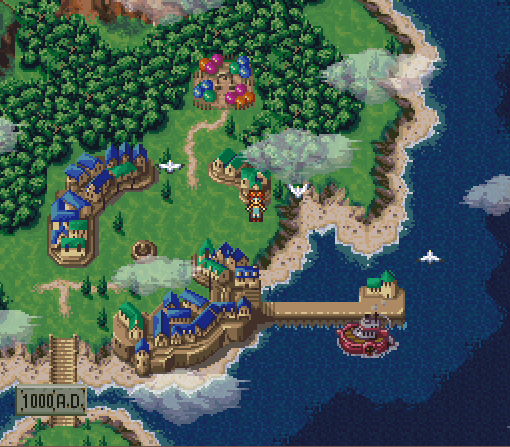 It’s an ugly, inferior way to experience one of the greatest games of all time. So what happened? How does a game this important get treated so poorly? Do Square Enix just not care?

It’s hard to understand why Square Enix didn’t just emulate the original version if they wanted a quick rerelease. On a high quality SNES emulator such as Higan the game can be upscaled in a pretty impressive and successful manner, something demonstrated well in a comparison put together by Fred on twitter.

What’s especially confusing about Square Enix’s approach to ports and remasters alike is how mind-bogglingly uneven it is. Final Fantasy 15 looks like it’s getting an incredible PC port, while Final Fantasy 7, 9, 10 and 12’s ports to platforms like PS4, PC and Mobile are pretty decent, high-quality versions of classics. Even that isn’t clear-cut, however – for instance FF7 PC had its low-quality MIDI music patched out for PS1-accurate substitutes, but FF8 PC never got that treatment, leaving fans to craft a music patch themselves.

There’s even small caveats and nitpicks on the good ports, like how FF9’s defining, old-world evocative font has been replaced by a pretty standard sans-serif font in the mobile version. These small things add up to influence the overall tone and presentation of the game, and these are the sort of things that the best remakes and re-releases like Shadow of the Colossus and Ocarina of Time 3D get right.

The same goes for the 2D library – FF5 and FF6 have costly but beautiful full background redraws and spell effect recreations, but they were paired with poor menu presentation and truly awful character sprite artwork replacements that sucked much of the soul out of the game. Secret of Mana has been remade in 3D with mixed results and Chrono Trigger is, as noted, a complete pig.

What’s astonishing is that this Chrono Trigger release has arrived in the wake of a beautiful version of Romancing SaGa 2. That one did everything right: it featured gorgeous redrawn backgrounds but retained the original sprite art filter-free. As a bonus, it released on absolutely every platform you can imagine. How is one company capable of getting it so wrong and so right all at once?

At the start of this piece I said that remasters and remakes were important for preserving games as an art form. Seminal pieces of the medium deserve to be introduced to new audiences – but perhaps not like this. Sometimes less is more, and all the changes and attempted improvements here actually serve to undermine a truly special game.

Make no mistake: everybody should play Chrono Trigger. It’s an all-time classic, and probably the most important 2D Japanese RPG ever made – but this new PC version doesn’t do that brilliant content justice. The state of it actually feels like a bit of an insult: a statement that Square thinks it can get away with just about anything with a game this beloved without a loss of sales, and a black mark on the legacy of one of their finest ever games. Play Chrono Trigger, it’s amazing – but find a SNES or DS cart instead.