Storytelling in video games isn’t easy to begin with, but with an MMO things get very complicated indeed.

Massively multiplayer online games are difficult beasts. There’s a lot of obstacles to navigate those games through, from the difficulties of managing servers on launch through to the fierce expectations of your players once the game is established. It’s their world, so you’d better not ruin it – and Final Fantasy XIV knows much of this better than most.

The game’s journey from a rushed and broken mess to one of the best MMOs on the market is well documented in the media. In fact, we’ve covered it here on VG247 before, chatting to FF14 director Naoki Yoshida about his efforts to repair the game and its reputation after being drafted in to find a project in utter disarray. While FF15’s director inherited a mess of a project pre-release, Yoshida inherited much worse: a very public, launched disaster. 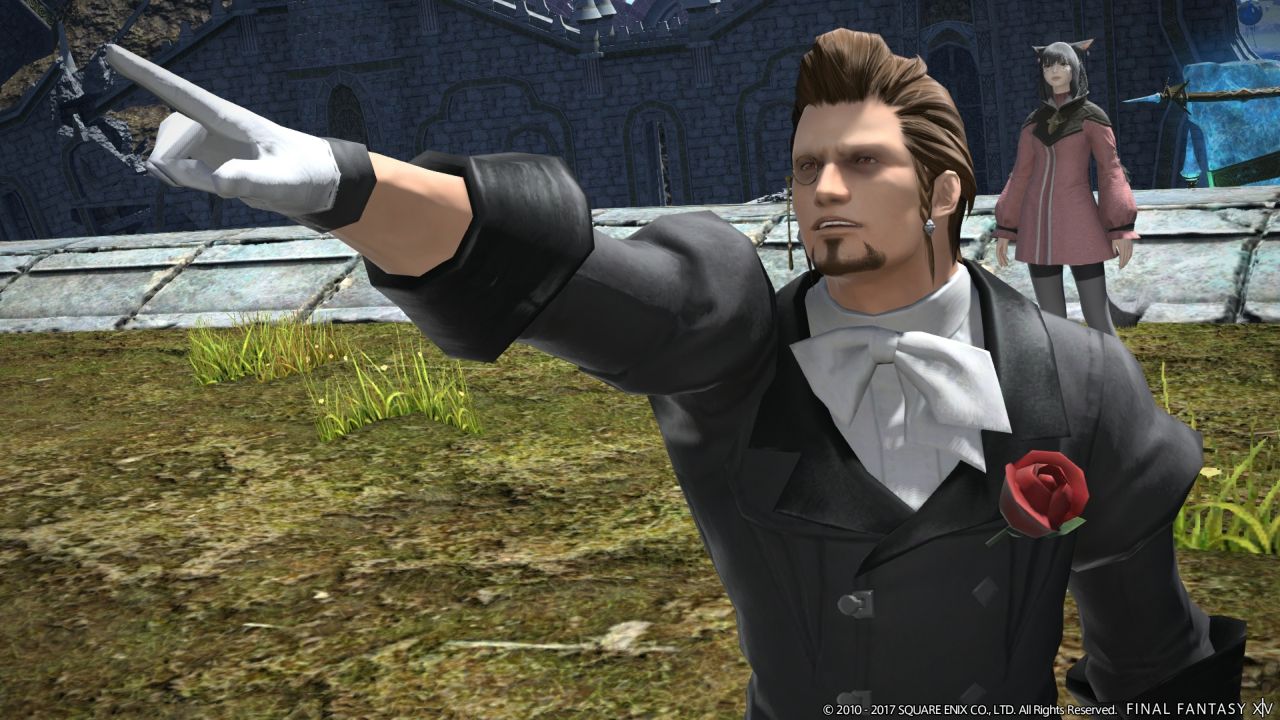 The rest, as they say, is history, but the success can’t just be attributed to one man. Yoshida had the vision, but he was surrounded by staff who helped him to navigate the game around those icebergs and continue to do so as it becomes increasingly more successful and thus faces ever-mounting expectation. One such person is main scenario writer Natsuko Ishikawa, the sort of heads-down staff member who’d never faced the media in interviews until this year.

“I really, really do think what she is doing is quite difficult,” Yoshida says as a way of introduction, something which makes Ishikawa laugh.

“With a typical RPG like a stand-alone RPG, many times there’s a story that’s already set up, the battle has been created ahead of time,” Yoshida begins when I ask the pair about how they approach narrative design for such a sprawling and popular MMO.

“With FF14, the game content is a very major part of it. You know, at each level we have a primal battle, if you reach a certain area we know we wanted people to start swimming, and so on. That’s required as part of the gameplay element – so essentially we kind of ignore the story part of it first and then build the framework of what the gameplay experience is. We do that first, and then I instruct the scenario team, like… Can you write something interesting to fit this? 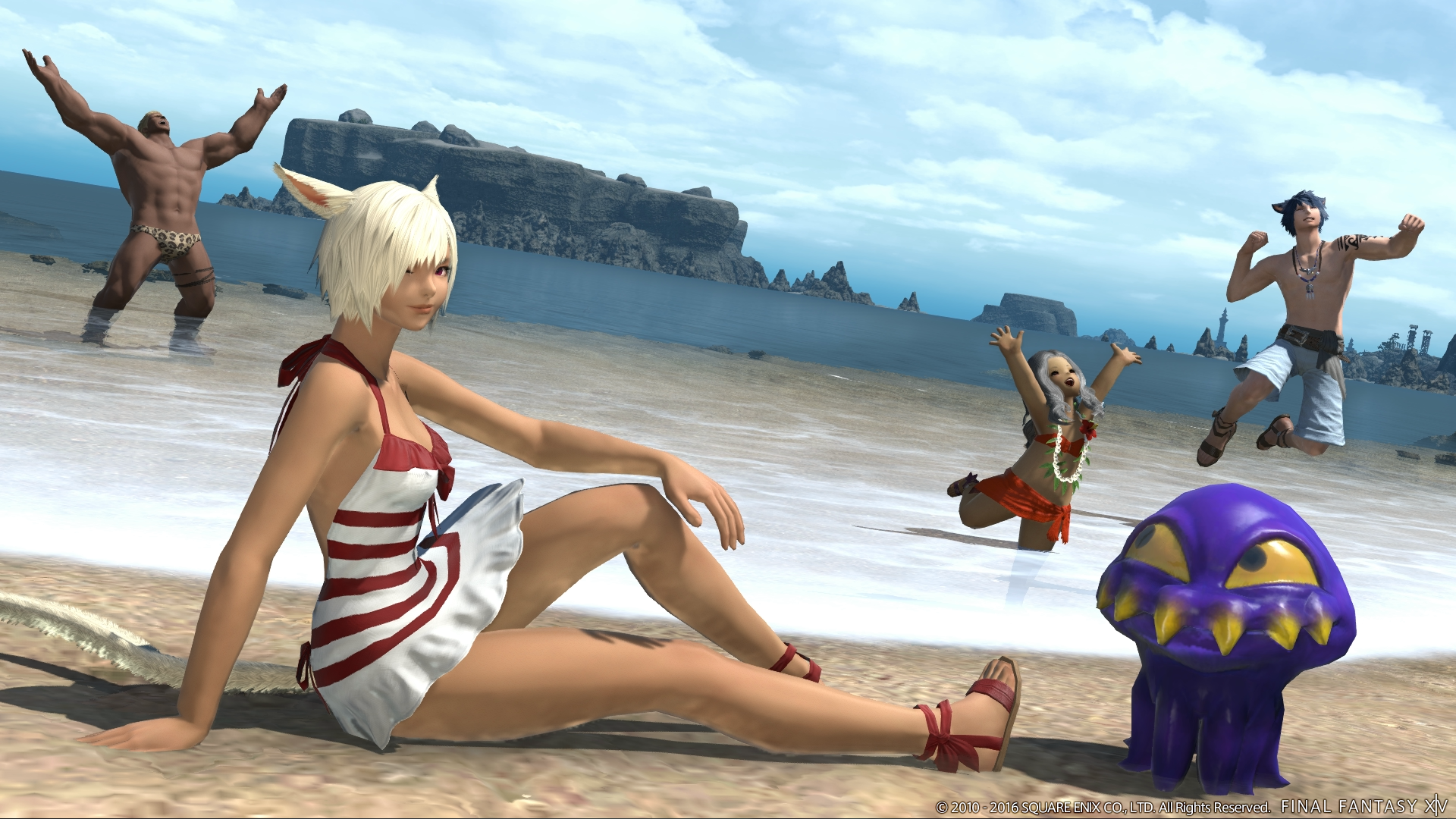 Ishikawa dutifully nods along to this, and many of the other microscope-level detail answers Yoshida offers up in our chat. Her greatest concern in recent times, however, has been working out how certain elements of the story will play out with FF14’s very international audience.

The latest expansion Stormblood features a new Japanese-inspired nation in FF14’s world of Eorzea, and there was a concern about how different countries would react to this representation.

“But it seemed everybody loved the story and it was received positively, so of course I’m happy about it but at the same time I’m pleasantly surprised as well,” she laughs.

Despite being a massively multiplayer online game, one key thing both are keen to stress is that they don’t adjust their approach to storytelling too much from single-player games. Yoshida stresses that he’s acutely aware of the game’s burden, thus the gameplay-first driven decision-making, but once the story is handed to Ishikawa and her team, the approach remains much the same.

“I don’t consciously change the way I approach creating the narrative depending on if it’s a stand-alone or an MMO game, but with any video game there is the element of the gameplay experience,” she explains. “The narrative sort of adds flavor and makes that interesting.

“That’s the question – how do I add that interest in the gameplay portion? With FF14 especially the gameplay experience is a very major component of the title, and so I would look at the different content that’s being unraveled within the gameplay, examine what kind of experience players are getting out of that and then see how the story can match up and mesh with that element.

“Not only me, but my scenario team in general is always working through with a lot of trial and error in terms of figuring out how to do this. It’s always a challenge and a process that we struggle through with the writing.”

It’s not all plain sailing, but absolutely key to Ishikawa’s approach to story is the ability to iterate – something many online games take for granted with gameplay but place less emphasis on when it comes to storytelling. She goes so far as to describe it as her favourite thing about the game – being able to make adjustments to ensure as many fans are happy as possible.

It’s quite a tightrope to walk. Everybody has their own custom character and ‘headcanon’, and anything new introduced risks contradicting that to the point of upsetting someone. Perhaps of more immediate concern to Ishikawa, too, is that her boss has particularly strong opinions on that subject.

“Let’s take Cloud Strife, or Noctis,” Yoshida interjects. “With them, you have a character established. They have a name, they have a background, their gender has been selected. You see where they’ve come from and where they’re going in their life. That’s what your typical Final Fantasy game is like narratively. Rather than this being the characters playing out like an actor within a story, in FF14 the player is really the protagonist. Because we let people select the look, the gender, the race… we’re not looking at somebody else’s story, but rather our players are making their own.

“That’s really the image that we want players to have – that they are the stars in their own story, rather than they’re playing out a story we’ve written. I instructed me team very strongly at the very beginning and established that as a rule when people are approaching how to create the narrative.

“So, for example, there’s a scene where in a typical RPG you would have the character grit their teeth or punch their way through, or the character might find something so funny that they’re rolling on the floor laughing… we don’t want that to happen to our protagonist in FF14 because the player might not necessarily find the same joke funny. We need to make sure that the players are able to feel that the story is their own. The hurdle is pretty high for the scenario team to overcome in that sense.” 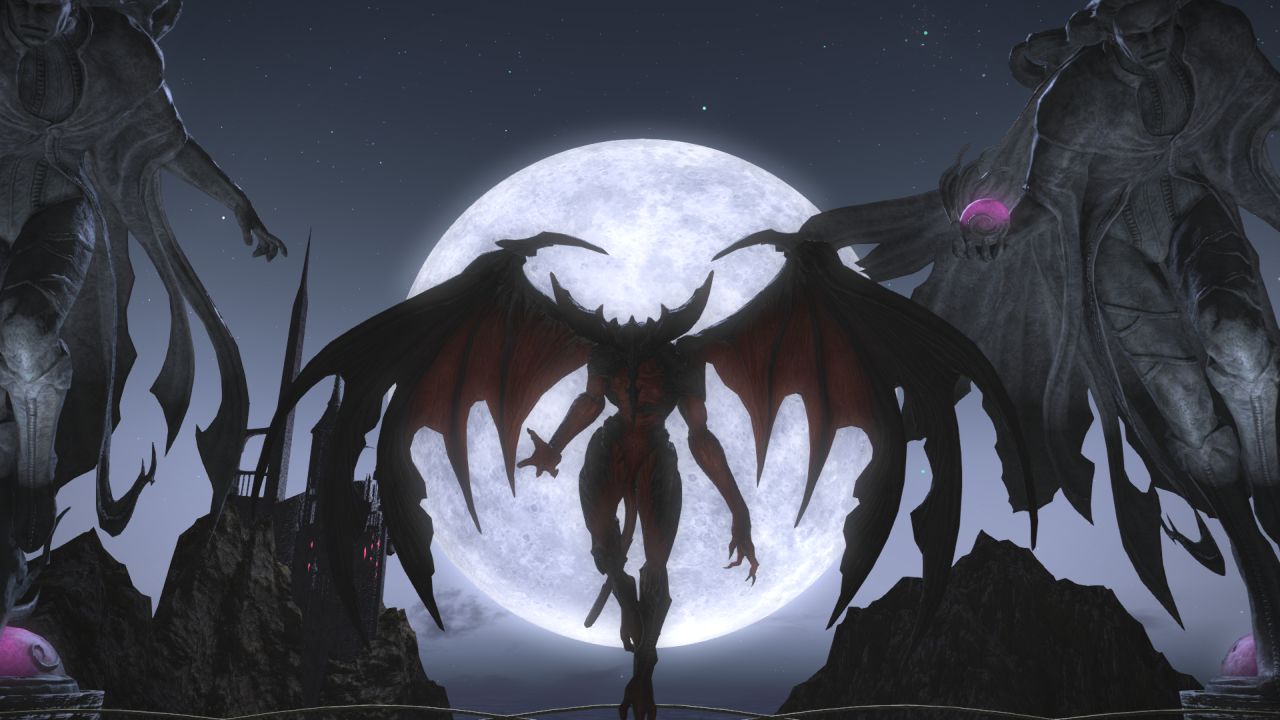 While a challenge, Ishikawa also believes that this restriction offers advantages of its own. In recent expansions some players have interpreted an air of romance between their character and certain NPCs, for instance, and that’s a thinking Ishikawa is all-too happy to have the scenario indulge.

This approach seems to be working, too – even the boss-man is slowly but surely relaxing his rules on character expression in the story.

“Recently, little by little, I’m allowing the scenario team to allow the player character to express more emotion,” he grins. “But of course that direction in and of itself can be interpreted by the scenario team differently – each person on the team will interpret any given situation in different ways. That’s why when it gets to the final review I go in and make adjustments – I’ll ask a scenario writer to go further or to tone it down.

“For example, there was a scene where we had to ask if we wanted the player character to hold the hand of another character, and I stepped in, and in the end I allowed it, to show that bit more emotion. It’s a tough balance to strike, and I’m constantly asking how far we’re going and if it’s the appropriate amount. I believe we’re done well with that.”

That’s the greatest peril of storytelling within an MMO, it seems: that even something as innocuous as holding hands has to be carefully considered, balancing out the needs of FF14’s millions of players, attempting to not disrupt any one of the myriad stories.

It’s clear Yoshida and Ishikawa both see it as an advantage, too – a chance to tell the sort of gameplay-focused, player-driven story that’s worlds apart from the usual Final Fantasy. In a world now dominated by shared-world, partially-online RPGs one has to wonder if Yoshida’s FF14 approach will spread to the main series – it’s certainly been most successful in the MMO world.