Codemasters has released details on two intriguing projects spawned from its yearly GameJam event. Say hello to Unagi and Soap.

The GameJam is a chance for the team to play around with mad peripherals and neat new concepts. It’s all inspired by the work of gaming charity Special Effect and its desire to allow anyone – regardless of disability – the right to play games.

Unagi is intriguing as it can be played using only your mind, thanks to a device that measures the player’s brainwaves. It allows gamers to manipulate objects within the world. The concept showed that the team could control elements in the world with a great degree of accuracy, and now that the concept is working, it’s down to Codemasters to turn it into a full game. You’ll find Unagi art in the gallery below.

The next project is a soapbox derby racer codenamed ‘Soap,’ which has been developed around the theme of physiotherapy. Soap has been designed with the rebuilding of muscles in mind, and will offer different difficulty levels and car handling restrictions depending on the needs of a specific patient. Codemasters has got the soap box car going down hill and a prototype control scheme has been implemented.

Codemaster’s GameJam is still ongoing, so we’ll have more on both projects as they progress. What do you think so far? Are you intrigued? 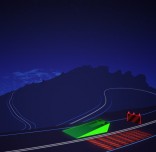