Former THQ exec Danny Bilson discusses his new project, and tells VG247's Dave Cook why transmedia will raise standards in narrative and engagement going into the next generation.

Bilson has worked as a writer, director, and producer across games, movies, television and comics.

He has worked in exec roles at EA and THQ. While employed by the latter he served as executive vice president of core games.

Bilson recently gave a compelling talk at the GameHorizon conference in Newcastle about his work history and creating new IP in the digital world. You can watch it all here.

Currently working on several transmedia projects that span games, movies and more, Bilson has yet to announce the names of his new titles, but there could be as many as three.

Said projects should be entering production soon, and may span the sci-fi, horror and fantasy genres. We'll know more in time.

If anyone knows just how hard the games industry is to predict it must surely be Danny Bilson.

He joined THQ back in 2008, to help the publisher make the transition to a core gaming company that focused purely on original IP. It was to be a strategy to help propel the brand to new heights amid an increasingly competitive market.

But he encountered a strange problem when he arrived, a problem he discussed at last week's GameHorizon conference in Newcastle.

He explained, "There were 17 studios in 2008. A weird thing was going on though; six of them didn't know what they were making".

Direction-less, these unnamed studios worked with Bilson to find out what projects they'd like to make most. Unique ideas started to form, hope and prosperity became visible on the horizon.

But then, eight weeks later, Bilson said he received a phone call from one of his bosses telling him THQ was cutting 50% of its production budget, and that all of those new, exciting ideas were to be killed off before they had a change to blossom.

Seven studios were promptly shuttered, but Bilson was undeterred, and tried to find a solution to the problems at hand.

One major issue he unearthed was a disconnect between THQ's marketing and development arms. They simply weren't gelling. Messages were confused, concepts felt out of sync, and Bilson decided to try and get both sides of working together to create a better working environment.

It started to work, but as the company's situation worsened, Bilson decided to leave THQ. As we now know, the publisher collapsed last year and while Bilson stressed has no idea what happened to the firm after he left, his time trying to bring together marketing and development planted the seeds of his new project.

Bilson recently stressed he has no idea how the THQ's eventual end came about.

I managed to have a chat with Bilson after his GameHorizon session, and he explained that his new project will see him create several new IP spanning movies and games initially, with room to spill out into other media. The films will dictate the story of the games, and likewise events in the games will inform the next movie.

“Our initial venture is to develop original IP, and multiples of them," Bilson told me. "We don’t intend to go out with just one game. We intend to go out with two or three, and hopefully one of them will catch fire. Hopefully they’ll all be respected for their quality and then if one works we intend to continue extending the stories into more media on that IP.

“That is the plan and that’s what I’m really excited about. Hopefully we’ll be in production really soon. I can tell you that the stories are all science-fiction, fantasy and horror. We’re not trying to do a love story or something ‘reality’, because it has to really work in the gaming space – not to say that we couldn’t with that kind of narrative development – but we’re not going to.”

I asked Bilson if he feared the disconnect in quality between movies and licensed games in the past, but just like his attempts to bring together marketing and development at THQ, his new studio will create the films, games under the same roof. The same goes for comics, websites, animation and whatever else spins out of each IP.

The reason? Not every development house has enough money to keep up with Call of Duty, GTA 5, Assassin's Creed or Halo. The cash it takes to produce these games is nudging so high that Bilson believes that the next-generation will only see a dozen of these triple-a games become runaway hits each year. At best. 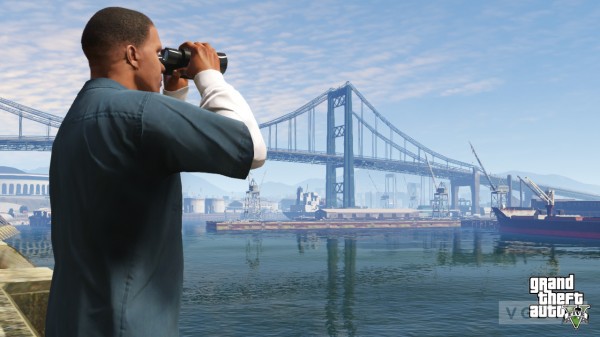 Few can match GTA 5's budget, so they must look elsewhere for a hook.

So to produce something of value without spending the GDP of a small nation, Bilson believes that mid-tier studios need to shift focus on to telling a strong, immersing story that involves the player, and gives them a wealth of media-orientated outlets. They need the transmedia approach, and they need to be built by the same team.

"They're built by the same talents," Bilson said of his project's separate parts. "Basically it's all the same project, and your flowing story – from film through to game, and back to the film – is a progressive narrative. You're not ever repeating anything because everything's additive. If we were to add a digital comic in it would fit into the story and would never be something you've already seen.

"There's always a barrier between the pieces – be it ego, 'business' or vision. That's why I'm calling it something beyond transmedia. I'm calling it 'connected transmedia' because the parts really are connected. Now the fear is people will say, 'What if you don't play the games and you just want to watch the movie?'

"We will make that OK, because what we may do on the second movie is a recap shot on film of the key story elements of what the gamers would have played, so that everybody's in sync. If you do this as a rule there's a danger of making the game fiction irrelevant because people say, 'Oh it's OK to just watch the movie'. I think it needs to be at least semi-essential to play the game to do something new and really cool".

I asked Bilson to highlight any current games out there that best match his vision, but although something like Defiance - with its game and live-action TV show running in tandem - seems to push boundaries, he felt it was still aiming smaller than what he's looking for. He did have some negative things to say about Halo 4: Forward Unto Dawn however.

Halo 4: Forward Unto Dawn was a confused project, Bilson argued.

"Forward Unto Dawn? Yeah, I don't know what the benefit of that was to [343 Industries]. Because- and this is my opinion – is that it was for the Halo fans. It didn't introduce Halo to a new fan through that and it didn't bring more people in. If you spend $10 million on that, what's your return on investment? Is it more fans, or is it just getting people excited as a marketing tool?

"Then there's a section of people who would look at it and say, 'I loved the game but I thought that was crap'. I'm not saying that. I'm saying there's all these variables, and I think the idea is to engage new people, and do so more deeply. It all comes down to the quality of the narrative in those things".

So the key to strong transmedia growth and long-tail success - for Bilson - lies in using other forms of media to capture a large audience, so that even if a particular person isn't a gamer, they can still get involved with the brand regardless. Angry Birds is a good example of how toys, spin-offs, merchandise and the impending movie adaptation cover all bases.

I suggested to Bilson that making movies and other media on top of a game would be even more costly, and that covering all bases will increase spend, rather than curb it. However, he laid out his approach in a fashion that, weirdly, made perfect sense.

"The films will be made at a price-point where they're really close to breaking even just for making them, because they're so low budget. With the on-demand rights, foreign rights and a certain amount of investment, they're very low-risk films. If they're any good then they'll make money.

"The games have a little bit of risk there, but we're talking about a really big game in the mobile space. What could that cost? Maybe a million and a half to launch, maybe less as we iterate and go on. So I'm coming from $80 million investments man, if I'm looking at $3-4 million to make a game and a movie, that's low-risk to me".

Forgetting about cost entirely for a second, we discussed why Bilson's project should embrace transmedia so strongly to begin with - rather than launching a game first and then spilling out into movies. It's all about establishing long-term impact from day one. This isn't a project that will spawn yearly sequels. If it works it's going to last many years.

"IP fatigue is really important," Bilson said of yearly franchise updates. "There's a real danger that studios ride something and then keep on riding it until they run into trouble. That speaks for innovation and often they keep on making sequels, but often people can become tired of the same old thing. I mean that's just human nature.

"Now, with the stuff that we're doing, everything is a piece of a whole. We can get to the end and close it off just like you can in a television series, but hopefully what's keeps it fresh is what's new in the story next, there's no repeats of what you've seen before, and there's new twists, stories and characters introduced. It's leaning heavily on narrative.

"If you move the story, surprise the audience and innovate with new stories, as well as taking them to new places – you can actually see that happening now. Are people sick of Game of Thrones? No. Are they sick of Breaking Bad? No. In fact I'm bummed that there's only eight more Breaking Bads left to watch".

So am I Danny, so am I. But what he's saying makes sense. Without the money to create something as big as Halo 4 for example - which is more of an 'event' than just a game - you need to be part of an elite tier of studios rolling in the big bucks. If you don't have the money where else can you go?

As the gap between the rich, comfortable studios and the risk-taking mid-tier widens, Bilson hopes to carve out a new path in which money is spent wisely to create a media dragnet, capable of capturing consumers across a wide demographic without gambling millions in the process.

But most importantly, narrative is key. Bilson agreed that yes, we've mastered visuals and simply updating aesthetics won't be enough to innovate going into next-gen, but that now is the time for the industry to double-back and raise its capacity for story-telling.

We'll know just how far Bilson's project will push narrative once he reveals it. VG247 will be on call to cover it when he does. Let us know what you think about his vision below.