Battlefield 3 developer DICE has peppered its End Game DLC with two new dinosaur easter eggs. Squint into the sky and you might just see a flying Pterodactyl swooping about. There's even a T-Rex skull in there if you look hard enough.

First up, you can find this T-Rex skull lying in the deserts of the Nebandan Flats map: 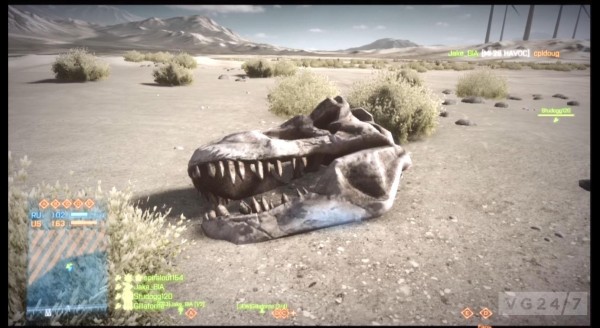 Thanks to Redditor spiralout154 for the pic.

Next, check out this footage of a Pterodactyl flying around the Nebandan Flats map in Air Superiority mode:

Thanks to Pixel Enemy for the footage.

Yesterday we reported that End Game also has a dropship from Battlefield 2143 floating around. Are you a fan of these easter eggs, should DICE work a dino-mode into Battlefield 4? Let us know below.