If you enjoy the frenetic on-rails action of Pistol Whip, this campaign expansion is a nice early Christmas present.

Pistol Whip, a popular game in the VR community, feels like the rollercoaster ride version of Superhot and Beat Saber combined. You get the same sense of being in a movie (although there’s more colour and variety in Pistol Whip), but you are constantly on the move, unable to slow down time as you’re instead blasting away foes in time with the game’s thumping music.

The 2089 update adds a story-driven campaign – a first for the game – which essentially means you get a small cinematic of sorts between each chapter.

In a clear homage to movies from the 80s, the brief campaign sees you taking on an army of robot soldiers, and the accompanying music is suitably of that era in feel. As with the existing levels in Pistol Whip, the overriding aesthetic remains, but the scene furniture and enemy design gives this campaign its own identity. There’s even a concluding boss fight to tackle, although I won’t ruin the surprise other than to say it fires a lot of bullets.

Gameplay feels largely the same as it did in previous levels, although that’s no bad thing. Although you’re on rails you can move your body side to side and crouch to avoid obstacles and dodge incoming fire. It’s just as much fun as it’s ever been, and a proper workout if you get into the action properly. I wasn’t the biggest fan of the pistol strike melee attack in Pistol Whip, mainly because the sense of connection didn’t feel right. It returns in 2089, and I’m still not in love with it, but it does feel necessary to break up the shooting and can become part of your flow when things go well. 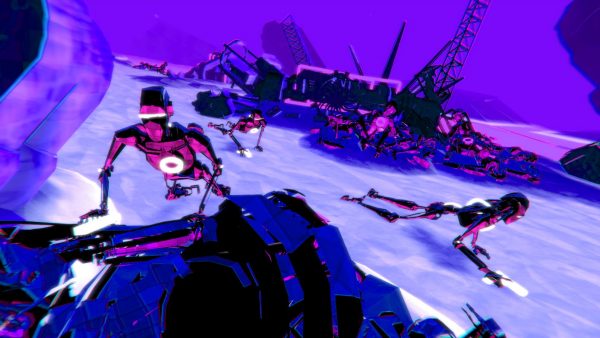 Definitely a hint of The Terminator in this scene.

In truth the story element on offer here is slight, with some impressive but still artwork being accompanied by solid voice acting to tell the tale of a man who fights his way out of a bad situation. It’s B-movie ham, but I liked it and it didn’t outstay its welcome.

The 2089 update to Pistol Whip can be whizzed through in under an hour, but will take considerably more time to master on higher difficulty settings. It’ll also serve as a nudge to get you back playing, perhaps trying to better your previous high scores on the older levels. Currently you can’t choose the new stages in Arcade mode, but that is coming next year. As a free update there’s little to be negative about here. I’ve seen games charge money for far less, so 2089 can’t help but feel like a good time.

Version tested: Oculus Quest 2 standalone. A copy of the game was provided by the publisher for the purposes of this article.