There will be spoilers for previous seasons of The Walking Dead below, and some plot details from the first episode of the final season will be discussed, albeit without major spoilers.

It’s been over six years since the debut of Telltale’s first season of The Walking Dead. It remains the studio’s best and most important work, a game that changed Telltale’s development practices and popularised episodic adventure gaming. It earned numerous game of the year accolades and has stood up extremely well over time. When I replayed the season earlier this year I still had the same despair, the same throat lumps, and the same strong sense of obligation to the characters. It remains unmatched in the sub-genre it more-or-less spawned, with only Life is Strange coming close.

The Walking Dead: The Final Season represents several firsts and lasts for Telltale. It’s the first time they’ve officially wrapped a multi-game storyline, making it the last game in their Walking Dead saga. It’s the first game of theirs to feature unscripted combat sequences that aren’t quick time events, and it’s the last game they’ll develop with their internal Telltale Tool (future games will switch to Unity). There’s a sense of heightened importance here: Telltale usually has multiple series going at once, but right now The Walking Dead seems to be its sole focus, with future games (like Stranger Things) announced but not yet shown off.

This makes sense. Telltale now struggles to generate the same buzz it did back in 2012, and internal issues within the company have resulted in bad press. Last November Telltale let go of 90 of its staff, lessening the studio’s workforce by a full quarter. Departing CEO Kevin Bruner filed a lawsuit against the company for financial damages, and reports from anonymous insiders have stated that there was less opportunity for innovation in design than they’d like, with The Walking Dead formula proving so successful that there’s no room for deviation from it regardless of ideas team members might have. 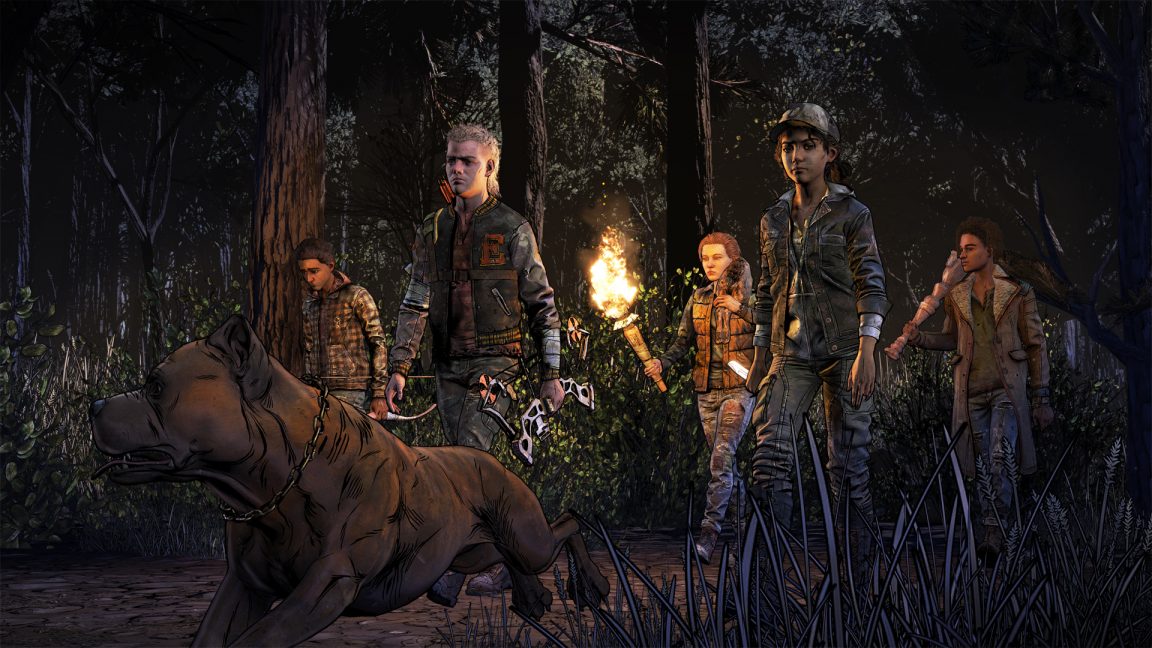 But there’s still a lot of good will among fans towards the developer’s take on Robert Kirkman’s zombie epic, and a great wrap-up season could be just the thing to get a restructured Telltale back on track. The first episode of this final season doesn’t present too significant a shake-up, but it’s also much more than a series of cutscenes punctuated by dialog choices, which some of Telltale’s weaker episodes have felt like in the past. It’s a bit longer and meatier than a typical Telltale episode, with more moments of direct control, but puzzles are still out. Whether that’s a good or bad thing will depend on your preference – Telltale achieved a lot by stripping the adventure genre right down, but it might be nice to see them add some of the genre’s typical features back in at this point (as Life is Strange 2 seems to be doing if Captain Spirit is any indication).

The first episode picks up well after the end of season 3. Clementine has not only found and rescued AJ between seasons, but they’ve obviously been together for a while now, and reference events we never see on screen. AJ seems a bit younger than Clementine was back in season 1, but the clear implication is that Clementine – who we, as players, have essentially raised across the course of three games – is now a parental figure, and AJ is her (and by extension our) surrogate kid. To really hammer this home, we’re given one of the most on-the-nose notifications a Telltale game has ever served up: ‘your choices will determine what he becomes’.

This message is undermined somewhat by the fact that Clementine, who we’ve been moulding for years, is going to be more-or-less the same for every player as the season opens. Not that I would dare say a bad word against Clementine, one of gaming’s truly great characters – she is a close personal friend of mine, even if she isn’t technically real. Clem sums up where her head is at now, and the game’s central appeal, in an opening bit of voice-over narration: “I’ll protect him with my life, just like Lee did for me”. God, I miss Lee.

If you have a heart, you love Clementine and want things to go well for her. The first episode – which involves her and AJ stumbling across an abandoned school run by a group of teens – grants us some wish fulfillment by giving Clem moments of near normalcy, chatting amicably and safely with kids her own age. Voice actor Melissa Hutchison carries Clementine’s maturity and growth perfectly, and improved animation make her more believable than ever. 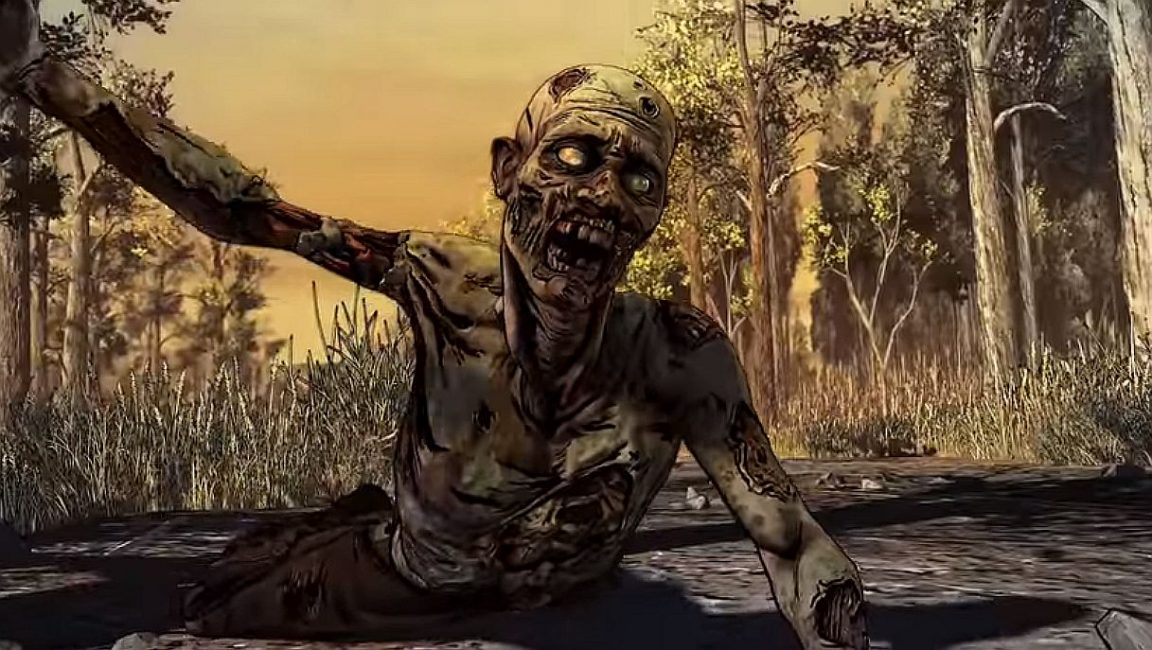 The rest of the characters in this first episode are a mixed bunch in every sense of the word. Some are fully fleshed out while others are barely given any lines, and they’re appreciably varied in terms of gender, sexuality, and race. Most importantly, they’re not all immediately at each other’s throats, as has been the case in past Walking Dead games. Getting to know these kids is a pleasure, and the game managed to get me a bit choked up multiple times just by letting me perform simple acts of kindness with Clem and AJ. It’s nice to have an episode where, for the most part, the zombies actually are the biggest threat. Unfortunately, this isn’t the case the whole way through – ‘uh actually HUMANS are the real monsters?’ is an increasingly tired message, but The Walking Dead can’t help itself, and has to remind us all too often that someone’s always going to turn out to be an arsehole or a coward.

The zombies are properly scary here, at least, and this time there are sequences where you fight them directly… kind of. There are sections where you control Clem as she takes out zombies; when you approach one you can either go for an instant kill by stabbing them in the head (which is dangerous if there are other zombies nearby), or quickly stun them with a kick to the knee, letting you perform crowd control. It’s not the most exciting system, but it shows a willingness to try new things on Telltale’s part, and it makes the zombies feel like a credible threat.

The art style has been overhauled too, and this season looks much better than its predecessors. The game now looks more like a comic than the comic itself does: while the comic’s black-and-white panels are often bland outside of combat scenes and splash pages, the game’s gothic style means that background scenery now looks closer to something out of The Wolf Among Us than previous seasons. Lines are thicker, yet faces are more realistic, and there’s a real visual sense of style and dread. It’s the sort of game where I found myself pounding the screenshot button often. 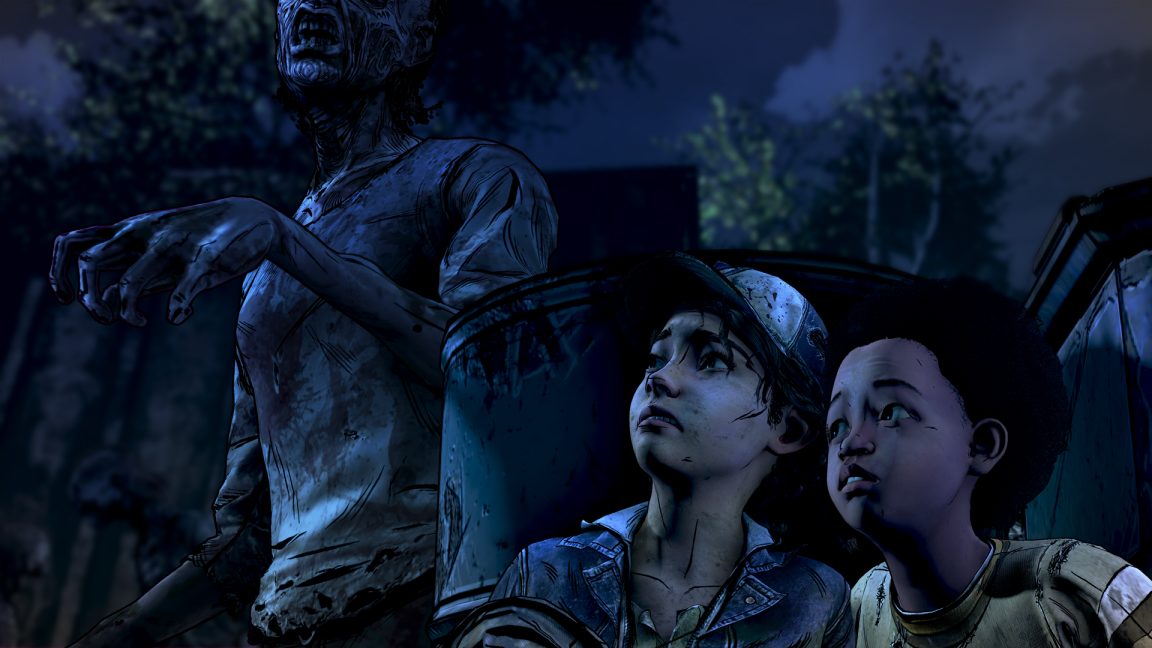 The first episode of The Walking Dead’s final season is an excellent start, but that’s usually the case. It’s always been the middle episodes that Telltale’s weaker seasons have struggled with. Telltale has built its empire around the idea that actions and choices should have consequences, and that memories matter. Perhaps when Telltale focus tested the dull bits of Guardians of the Galaxy, or those action sequences in Batman that didn’t quite work, or the meandering parts of the third season of The Walking Dead, a little notification popped up somewhere for the team: ‘your players will remember that’. But as they wrap-up their most important series, Telltale’s writers also know that many of us remember every decision we made in the first game six years ago and have carried the weight of them ever since (I can’t necessarily say the same for the second or third seasons). Hopefully I’ll get to make some new memories across the rest of The Final Season.