Microsoft has announced a subscription service called Xbox Game Pass which provides users with “limited access” to over 100 games. 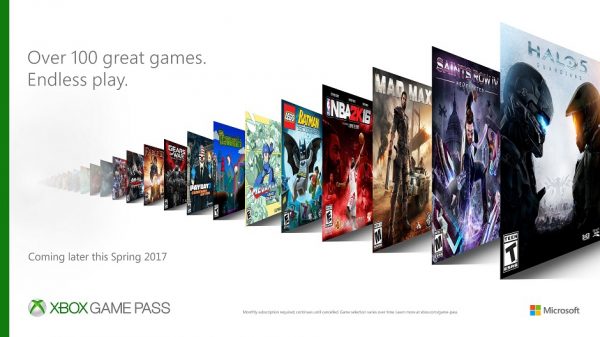 The games include both Xbox One and backward compatible Xbox 360 games. Some of the titles included at launch later this spring include Halo 5: Guardians, Payday 2, NBA 2K16 and SoulCalibur 2.

“One of the best things about Xbox Game Pass is that you can discover and download the full titles directly on your Xbox One,” according to Xbox boss Phil Spencer. “That means continuous, full-fidelity gameplay without having to worry about streaming, bandwidth or connectivity issues.”

Xbox One games in the catalog and the available add-ons and members of Xbox Games Pass can also purchase titles at an “exclusive discount.”

New games will be added monthly and will cycle into the subscription with some cycling out. This will provide the subscriber with new titles on a regular basis.

Spencer said Xbox Game Pass will be tested by select members of the Xbox Insider Program in the Alpha Preview ring starting today. Titles are limited in number during the period.

Xbox Live Gold members will also be receiving exclusive access to Xbox Game Pass prior to the program launching to the broader community.

Xbox Game Pass will run you $9.99 or the regional equivalent per month.