Horizon Zero Dawn is going to make other open-world developers sick with envy. 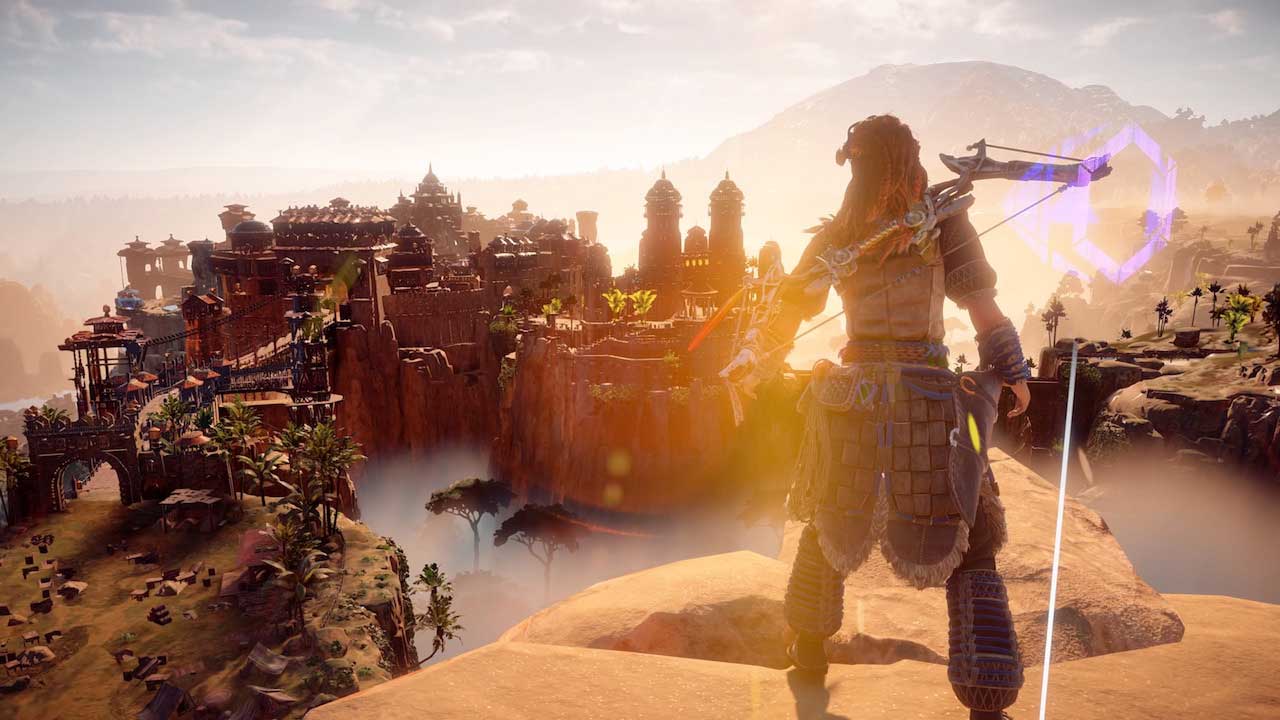 Before I played Horizon Zero Dawn I spoke with a senior producer at Guerrilla Games. He told me fans of RPGs from the last few years would really enjoy it.

I didn’t understand this at the time, but about two hours into Horizon Zero Dawn the comment fell into place. This game owes a great deal to The Witcher 3: Wild Hunt – and that’s not something we complain about hereabouts.

It is The Witcher 3 of post-post-apocalyptic robo-dino adventures; it is the sort of thing Ubisoft will wish you had never seen if it dares to release another time-sucking, glitch-filled Assassin’s Creed.

The similarities between The Witcher 3 and Horizon Zero Dawn are too numerous to waste space on, but you could also find a lot of comparables in, say, Rise of the Tomb Raider. If you have played either of those games, you already know what to expect from Horizon Zero Dawn: a bristling combat toolbox, customisation through skill choices and gear, a large map studded with distractions and narrative-driven missions to take you from zone to zone.

You also know whether you like that style of game or not - but not whether you have room in your life for another one. Suffering open world fatigue as I am (even very good 40, 60 and 100 hour games are a penance to games writers), I myself went into Horizon Zero Dawn wondering what it had to set it above or even alongside magnificent efforts from CD Projekt RED and Crystal Dynamics.

Some people are going to say it’s the beauty of Horizon Zero Dawn’s world, which stands amongst the best the medium has ever produced, and possibly bypasses them for sheer technical achievement.

Others are going to say the story of Aloy and the post-post-apocalyptic setting; certainly the narrative is compelling enough and falls into a better rhythm after the awkward Assassins Creed 2-style tutorial opening, and the key characters are varied and distinct.

For my money, it’s two things: the combat and the perfection of the package.

Combat in Horizon Zero Dawn is more forgiving than The Witcher 3, but on normal difficulty most fights ask more of you than to just run in swinging your spear about and hoping for the best.

Though neither human foes nor individual machines are a real problem, enemies attack in numbers and combinations, which prevent you relying on any one tool and can rapidly overwhelm you. While you can duel single opponents action-style with rolls and well-timed heavy and light swings, in almost every single encounter you’ll be bashed off your feet by its pals before you can get more than a couple of hits in.

Fights ask more of you than to just run in swinging your spear about and hoping for the best.

This never changes even as you acquire better gear and a larger health pool: 15 levels above the recommended range on one side quest, and with gear far beyond what I ought to have had at that stage in the game, a single error against a boss ate most of my health bar and I had to leg it for breathing room to spam potions.

Rather than being a matter of raw level numbers, success is all about knowing what you’re getting into and approaching the encounter with a strategy. Will you take out the smaller beasts by stealth before diving into the fray? Would it be better to go in scattering bombs around, or to and rope the larger foes down while you clean up? What if you start by knocking off the component that gives the big baddie an advantage here – or blows nearby baddies up? Can you turn some of these baddies against each other? Are you wearing the right armour? Wouldn’t it be better just to go around? 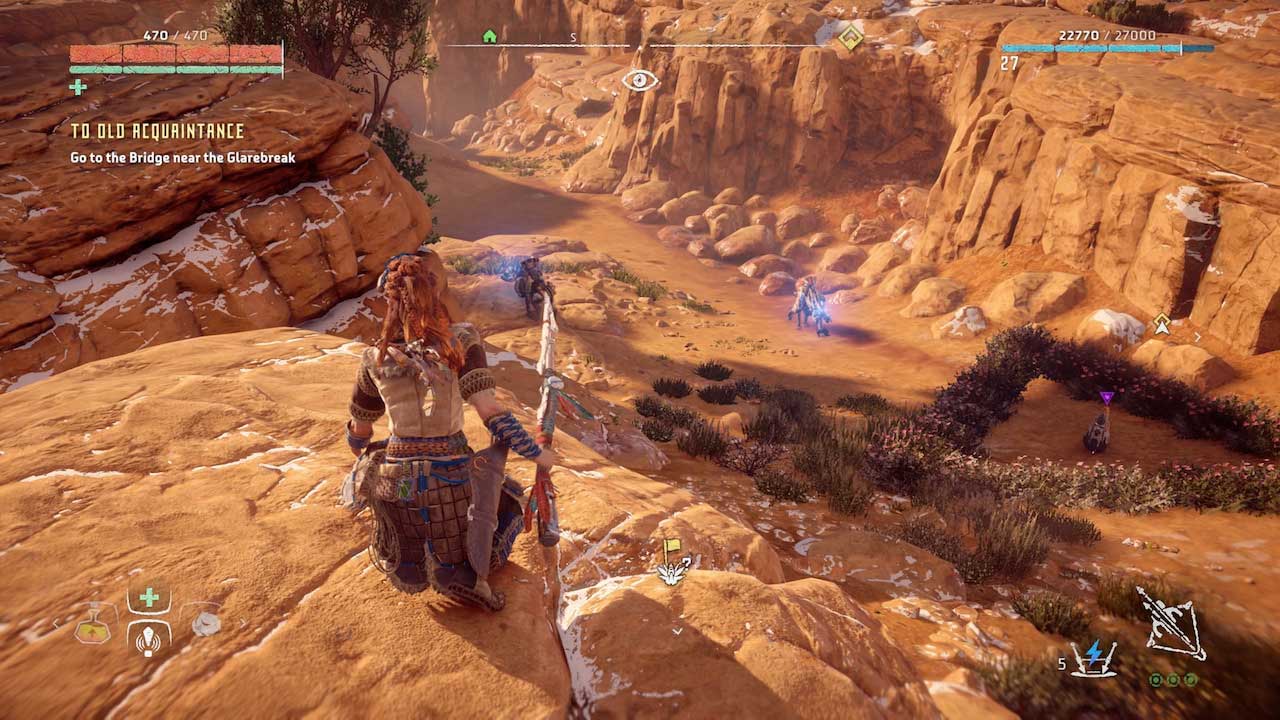 Getting it right is extremely satisfying, as you cut down foes with maximum efficiency, dismantle bullet sponges piece by piece to turn them into soft squeakers, and control the battlefield with status effects – and, when necessary, with rope.

When you get good – and y’all will get far better than I, an individual with all the hand-eye co-ordination of a decomposing possum – you’ll dive into battle against even the mightiest arrangements of foes with barely a flutter of an eyelid and maybe a quick glance through your Focus or check in with the machine encyclopedia.

Getting it right is extremely satisfying, as you cut down foes with maximum efficiency, dismantle bullet sponges piece by piece to turn them into soft squeakers, and control the battlefield with status effects

The Focus is the Detective Mode of Horizon Zero Dawn, and worth a special mention because Guerrilla has sensibly restricted Aloy to a slow walk when using it. You’re not tempted to spend the whole game looking at the world through a purple haze, instead using it to tag enemies and prepare for combat in advance – in turn reducing the amount of time you’ll spend changing equipment in the menu mid-battle.

The first time you encounter a machine its information goes into the encyclopedia, which is the most usable example of its kind I’ve ever seen. The variety of beasts in Horizon Zero Dawn isn’t so enormous that you can’t remember which one is which, but if it’s been a while since you’ve seen a particular kind of enemy it’s really easy to quickly locate the relevant info, rather than having to poke through a half dozen screens to see how many bits can be knocked off (your Focus can also supply this intel on the fly, but it’s hard to use in the middle of a fight if you’re surprised by something). 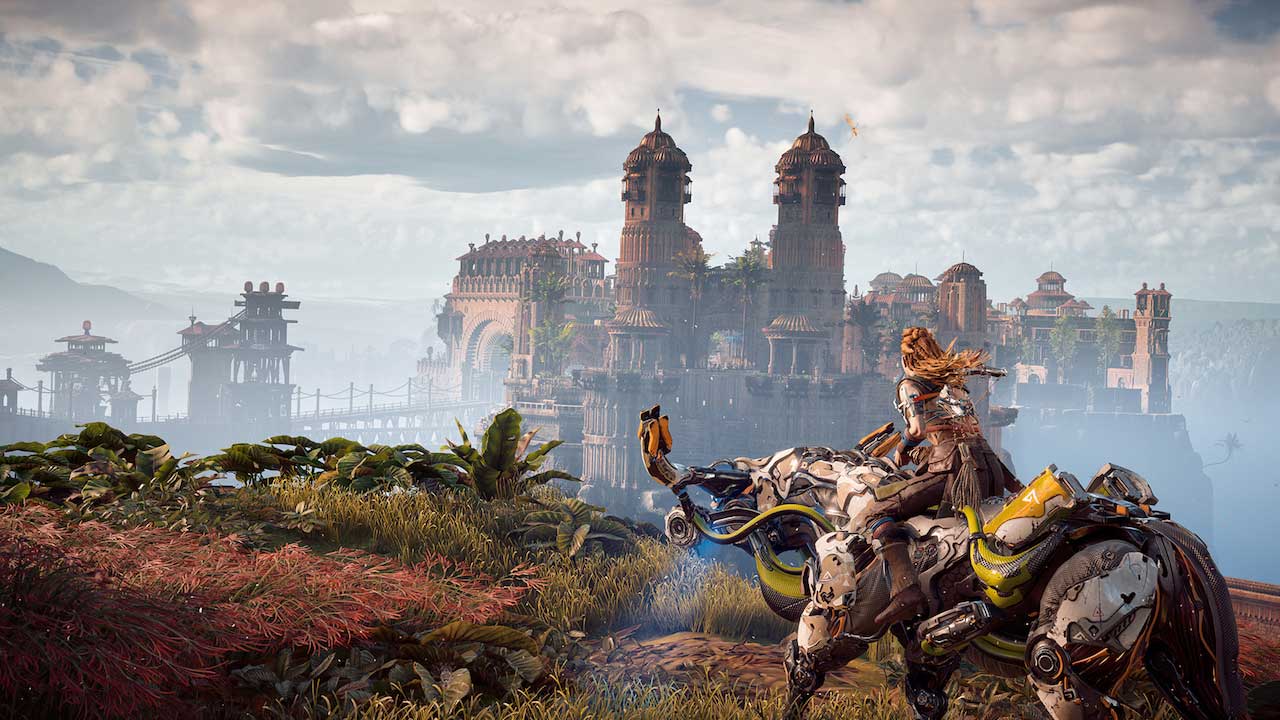 Once you’re armed with knowledge, you arm yourself with actual arms, and Horizon Zero Dawn has at least 17 different types of ranged attack spread across seven weapons, in addition to melee capabilities. Juggling your weapon options to match the situation at hand is key. You can only equip four at once, and it’s impossible to cover all possibilities with one load out.

Some of the ranged attacks seem to double up in effect at first, but I came to appreciate the subtle differences between them. A very small number of these options fall flat, like the component harvesting arrow in a game where resources rain upon you from all angles. With this much variety it’s not surprising some elements of the sandbox are less compelling, though.

Incidentally, the combat challenge side missions in Horizon Zero Dawn are actually very good. Rather than being twitch-based tests of skill, which so often puts 100% completion out of my reach in open world games, they’re more like puzzles – if you find the right gear and adopt the right tactics you’ll ace them. This teaches you skills useful for everywhere else, most notably the capacity to think creatively about your tools and how to combine them with each other and the environment. The tutorial quests for each weapon, which offer generous XP rewards and don’t force themselves on you, are another excellent touch. 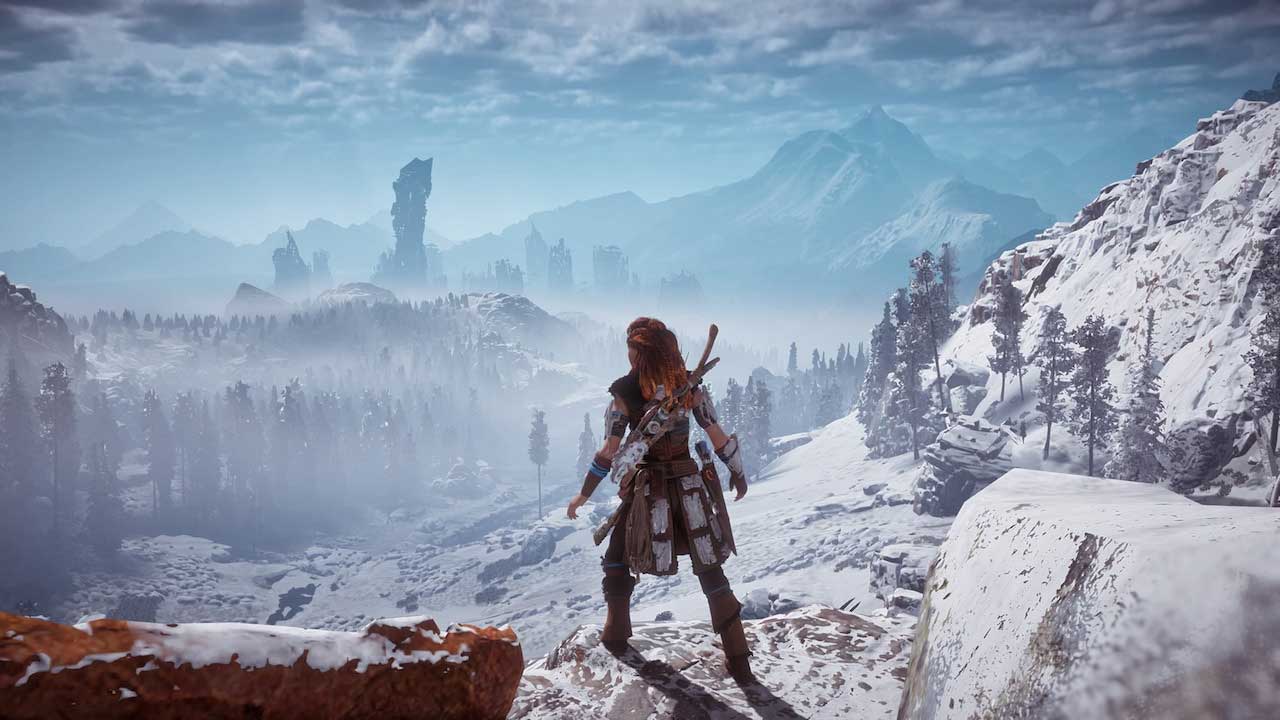 The combat and preparing for it make up the core gameplay loop of Horizon Zero Dawn, and until you’ve seen and defeated every type of baddie in every combination, not to mention their more powerful Corrupted forms, you won’t be sick of it – and that should take you tens of hours at least, even if you’re checking off all the major missions you come to.

This is very probably the most flawless open world game ever made.

As for the rest of it: wow. This is a supremely polished game, and very probably the most flawless open world game ever made. Every complaint I have about Horizon Zero Dawn is a trivial niggle (Aloy’s hair behaves strangely in elevators, ambient dialogue is sometimes out of whack with story progress) or a criticism you could aim at pretty much the whole medium (swimming transitions are a chore, the uncanny valley is wide and deep).

Performance on a standard PS4 was smooth and slick as a lawyer’s grin, and glitches were so few and far between – even after playing for a whole day without reset – that they’re just not worth cataloguing.

Every design choice feels measured and makes sense in context, like the loot boxes that allow you to keep all your quest rewards even if your inventory is full, or the medicine bag motivating you to explore rather than fast travel so you can refill it. 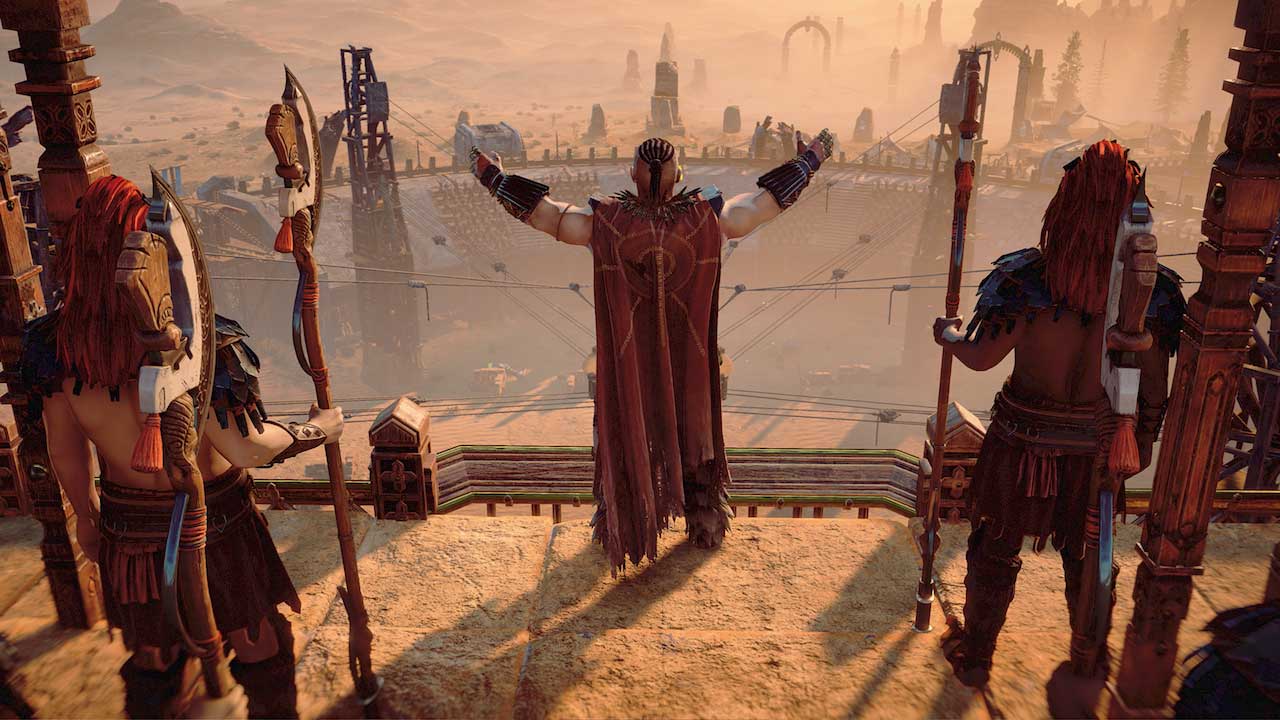 Even the old standbys of open world gameplay have been treated with care and elevated above the pack. For starters, non-climbing sequence traversal is extremely forgiving, so you can hop your way up most mountains and slide down the other side if you take a wrong turn and don’t want to go back around.

Almost all side content is laid out in such a way that you can complete it as you advance through the main plot without huge amounts of backtracking (pro tip: don’t go out of your way chasing icons until you’ve checked in at the quest hub along the main story route). Most of it is worthwhile, because it’s either fun and interesting in itself or rewarding in a material way, and even the collectibles are good - there are relatively few, none are stuck behind painful traversal barriers and you can buy collectible maps as soon as you finish the opening sequence.

Oh, and Photo Mode is sensational. I don’t know why every game boasting a large and good-looking world doesn’t ship with a photo mode, but this one is feature-rich and easy to use. 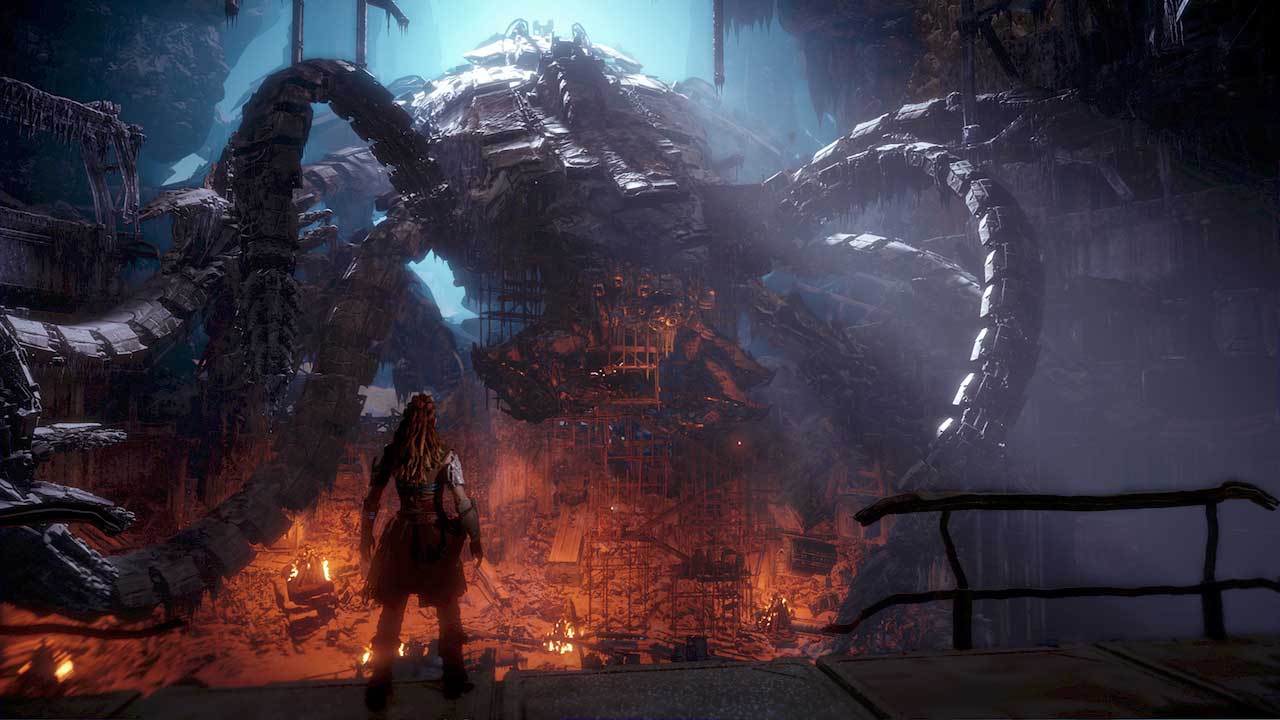 There are only a few things I would gently suggest could use improvement for (the possible) Horizon 2 that don’t also apply to all video games, ever. Load times after fast travel on a standard PS4 are appalling; it is generally quicker to hoof it. There should be more indication of the suggested order of main quests, which occasionally seem to deviate from the general geographical and difficulty flow in puzzling, immersion-disturbing ways. That’s it.

Horizon Zero Dawn is a meaty but player-friendly open world epic with a solid action combat heart, unique setting and ravishing scenery. It is The Witcher 3 of post-post-apocalyptic robo-dino adventures; it is the sort of thing Ubisoft will wish you had never seen if it dares to release another time-sucking, glitch-filled Assassin’s Creed. It is the promise of open world games gloriously fulfilled. I don’t know what else to tell you.