Everyone is probably sick of zombies at this point. Their time in video games is well past its prime, and their place in pop culture has all but vanished. The Walking Dead TV series has turned into a shambling, rotten corpse of a thing, and considering how many Walking Dead fans didn’t start with the comics, I’d say the show’s declining viewership is another indication that it’s over.

This is why I feel now is the best time for interesting works involving zombies to emerge, because people are willing to experiment with the formula.

I’ll be the first to admit that Overkill’s The Walking Dead didn’t look particularly interesting in initial footage. It seemed like a game releasing five years too late, but I remained optimistic given its developer’s pedigree. After spending a few hours with the beta, I can see why it was hard to show it off in trailers.

Overkill’s The Walking Dead is a tactical zombie survival game. In a lot of ways, it’s an evolution of many Payday and Payday 2 systems. The two missions featured in the beta do a great job of demonstrating the sort of experience Overkill is going for. 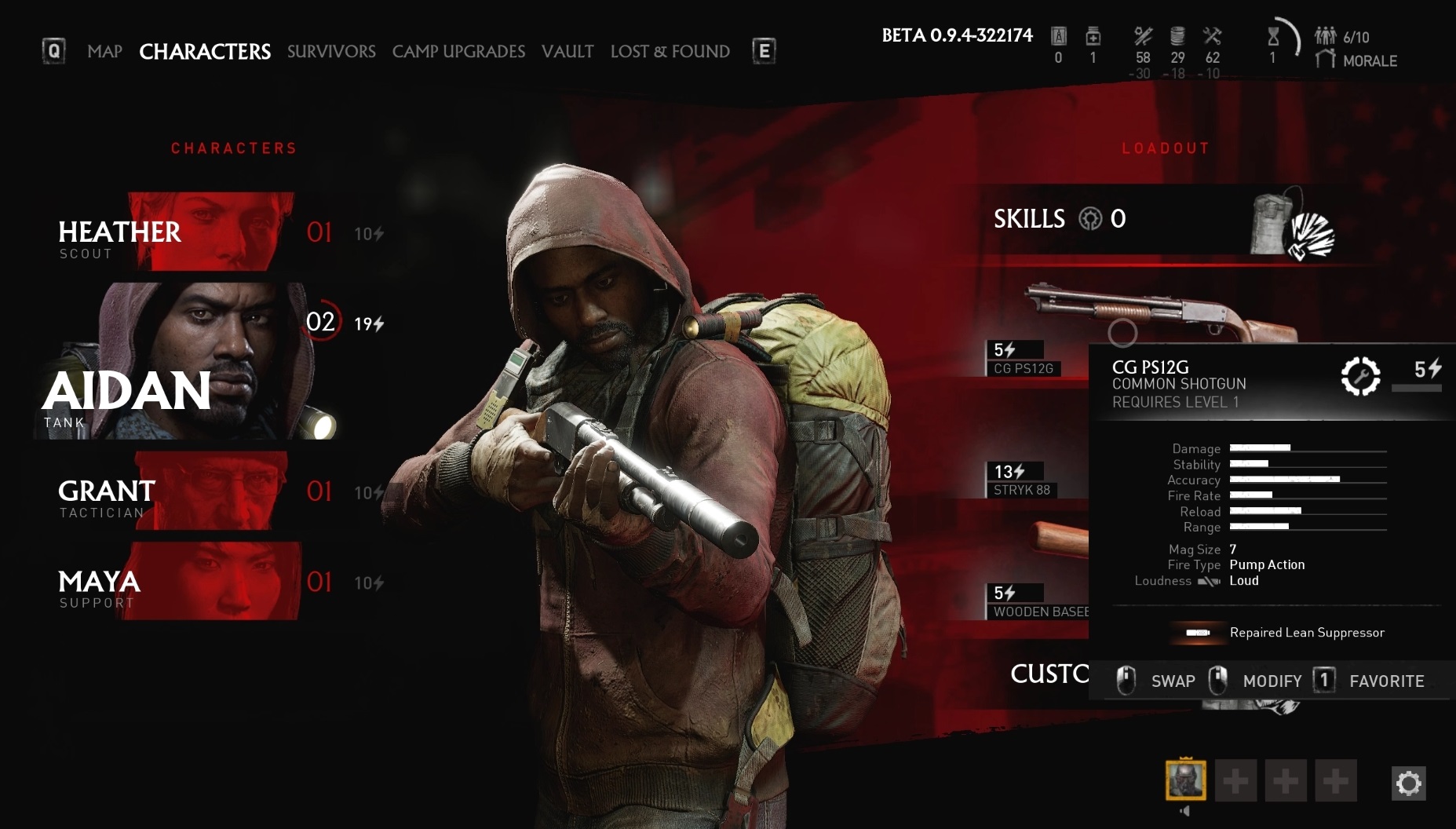 The first starts off as a simple defence mission where you’re tasked with keeping an eye on three access points. Holding off the horde are gates at each point, which fall quickly as soon as the undead show up. Your first order of business is to contain the flood of zombies, enough that you can repair the gate and later divert your attention to a different one. You do this using wooden planks collected in the pre-action phase.

You can only carry one set of these at a time, and the constant trips back and forth to replenish planks and your collection of crafting materials and ammo make up a major part of gameplay as a defender. Things start off slow with enough breathing room between attacks to allow defenders to resupply, but they quickly get out of hand as later waves start to hit all points simultaneously.

If you thought having limited resources was restricting, waves three and four are where things really become terrifying. The game makes smart use of monster closets – smaller, less distinct spawn rooms that play a bigger role in later waves. These help flood the area with all kinds of zombies – enough that it prevents any spot from becoming completely safe.

You’re never going to have enough ammo to hold them all off, which is why the game tries to teach you to rely on melee combat in the early, more relaxed horde attacks. Getting proficient enough with melee weapons, managing stamina and knowing when to shove and when to swing is one of the first things you’ll have to learn in Overkill’s The Walking Dead.

In the few rounds I played of the first mission, the win was always costly, bordering on pyrrhic. If we hadn’t lost any players to the horde, most of us were out of healing items, nearly out of ammo, and almost always on the last bar or two of health.

Some games felt more frustrating than satisfying, so balance certainly needs a bit of work. I am sure that with enough unlocks and upgrades, things will be more forgiving. That said, character progression felt very stingy in the beta. A failed mission that you spend over half an hour playing rewards very little XP. 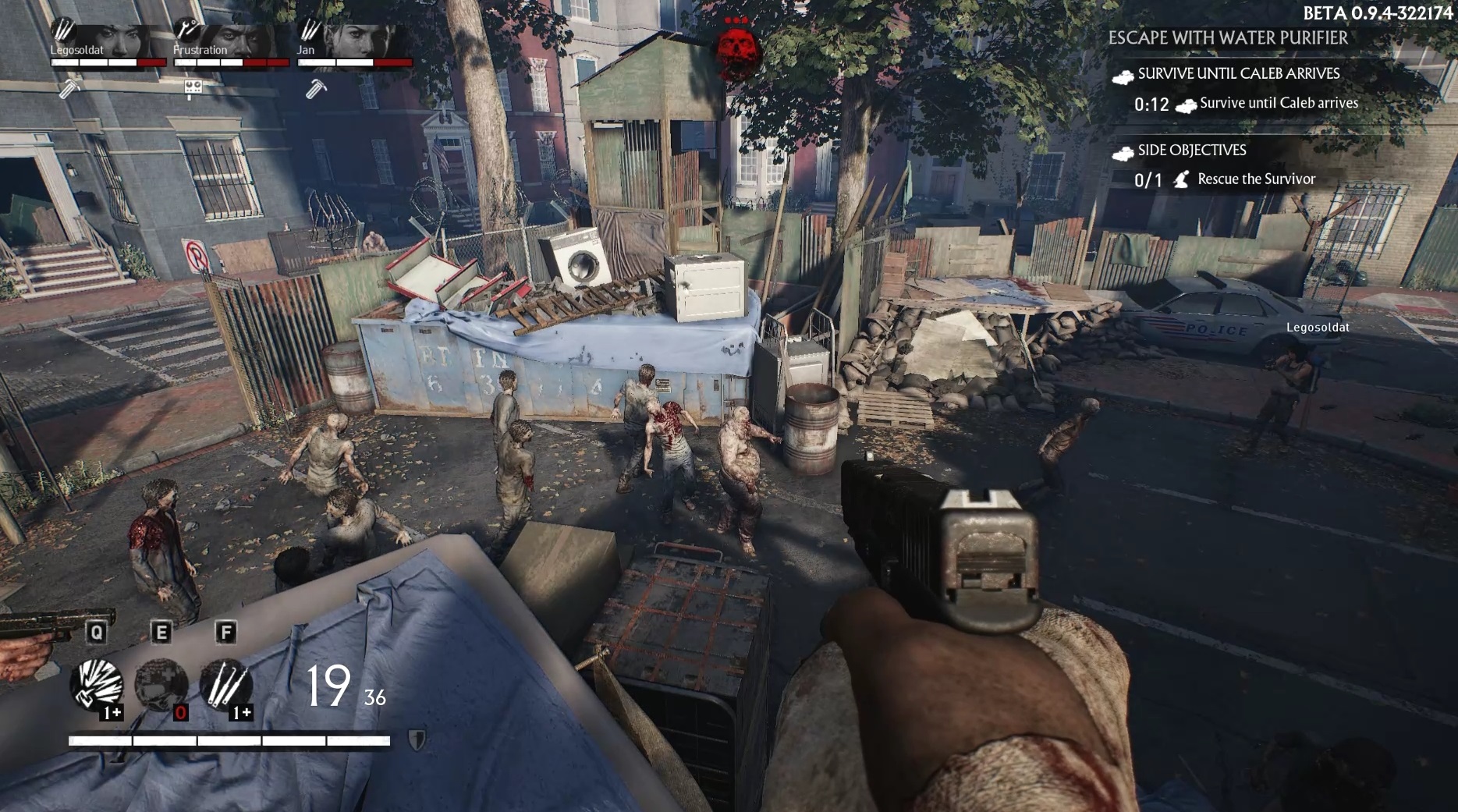 Of course, the game needs to maintain this oppressing feeling of always being outnumbered, under-equipped and barely making it through. Creating terrifying enemies is part of this, but we’ve gotten desensitised to the concept of zombies as monsters from decades of pop culture and games.

It’s hard to make them scary. There’s a predictability to the way zombies behave that inspires developers to try and even the odds by upping their speed, health or giving them decidedly un-zombie-like powers.

Overkill’s The Waking Dead instead falls back on an obvious, but no less effective solution: making them a major threat in groups.

The undead in the game are as slow as they are in the series and books, with very few unpredictable quirks. But seeing five or more of them together means you will have to time your melee swings and shots. It’s a given that you’re never going to have enough stamina or ammo for every fight.

This is how the game creates an authentic ‘The Walking Dead’ feel for its world without making the sorts of concessions making video game zombies typically demands. 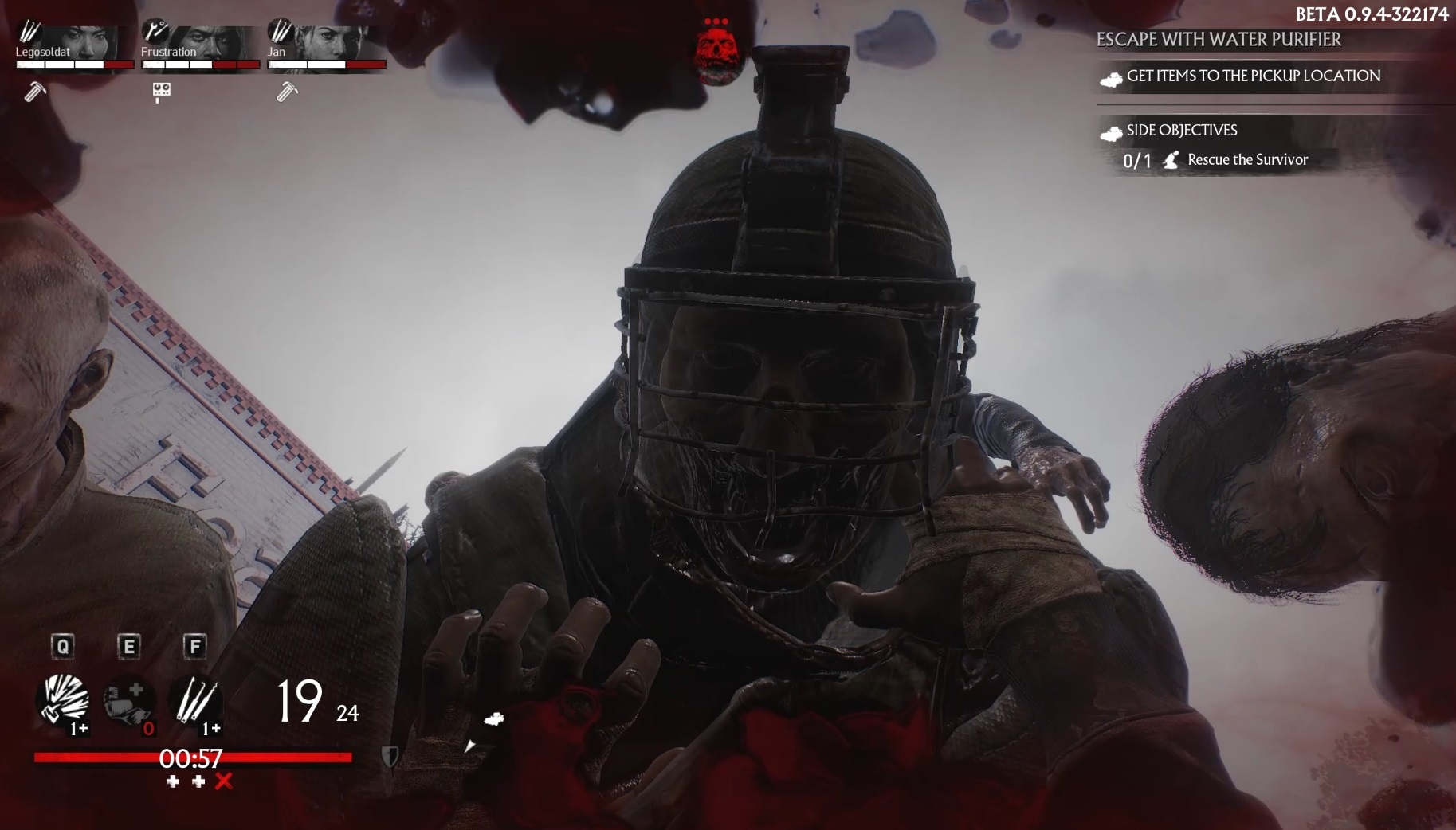 The second mission is where Overkill’s The Walking Dead really opens up to show off more of its world and mechanics. As it quickly became apparent, the game is about much more than wave defence.

Though the first mission touches on the element of stealth (more noise = more zombies), you don’t really get to make use of it until you jump into this mission. Your task this time is to locate certain items, and successfully extract them at a pre-determined point.

Payday players will be familiar with this concept, but where that game’s maps were usually contained, TWD’s levels feel much bigger and continuous. You get to travel through several alleyways, buildings and rooms as you reach what I’ll call “event” areas.

And just like in traditional wave defence, you’re already starting off with the handicaps of limited ammo, slow movement speed and so on. Our initial goal was to get around several big clusters of the undead without being detected. Similar to Payday, missions can be completed in a variety of ways. We quickly realised that taking down every zombie wasn’t an option, so we had to carefully survey the world and navigate our way around.

This is where the different character classes come in. Each has access to certain skills that benefit the group in different ways. Some are capable of removing advanced locks while others are perfect for disarming traps. Depending on your – let’s call it group build – some areas will be entirely inaccessible, and certain tactics may be off the table.

Diversity helps, though it didn’t seem like you could ever go in prepared for anything – except maybe some hundreds of hours later when your various classes are all well-equipped.

The thought of diverting from the most efficient path towards objectives in a bid to scavenge more supplies constantly hangs over your head. It was particularly amusing to see some of the most nonsensical moments in the show and comics repeat in gameplay. We’re all human after all, and sometimes a small detour to a supply box – which looked safe and doable – ends up getting everyone killed.

Someone could trigger a trap that causes car alarms to blast and … well, you get the idea. With randoms, I got to see how group mentality and decision making can affect the run.

Some have no issue leaving stragglers behind, while others are happy to attempt heroic rescue missions at a moment’s notice. It’s all entirely player-driven, and it’s clear how emergent moments like these wouldn’t have happened if the game’s various systems and mechanics didn’t come together in the right way. 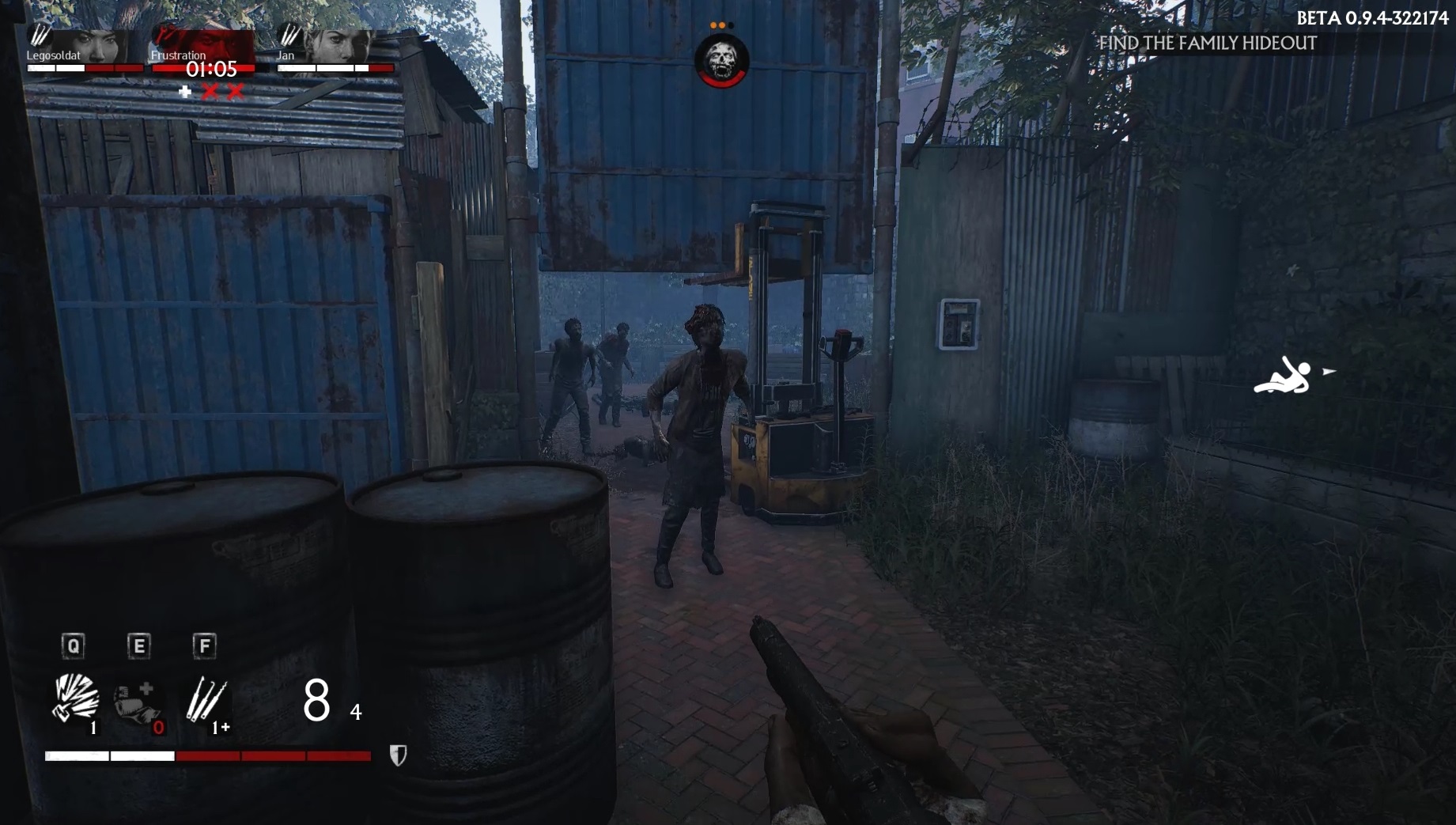 Scavenging missions also have human NPCs of rival factions out to kill you. In this case, our job was to take back an item this group had stolen during our previous defence mission. It’s a nice narrative excuse, but gameplay is what ultimately makes it work.

Like the undead, armed enemies will respond to trap triggers and noise of all kinds. You can try to lure away stragglers and take them down one by one, or you can run in all guns blazing.

But this isn’t Payday, which means choosing to go loud inevitably means zombies will swarm the area. The undead can be used as a weapon, but you’ll hardly ever have enough ammo for your armed assailants and the undead.

In one case, we used zombies to create a diversion after grabbing the item we came for, and early in the fight in a bid to thin the armed goons’ numbers. Of course, this made it very difficult to scavenge the area now that it’s swamped, which, as fate would have it, nearly got us killed in the final push. 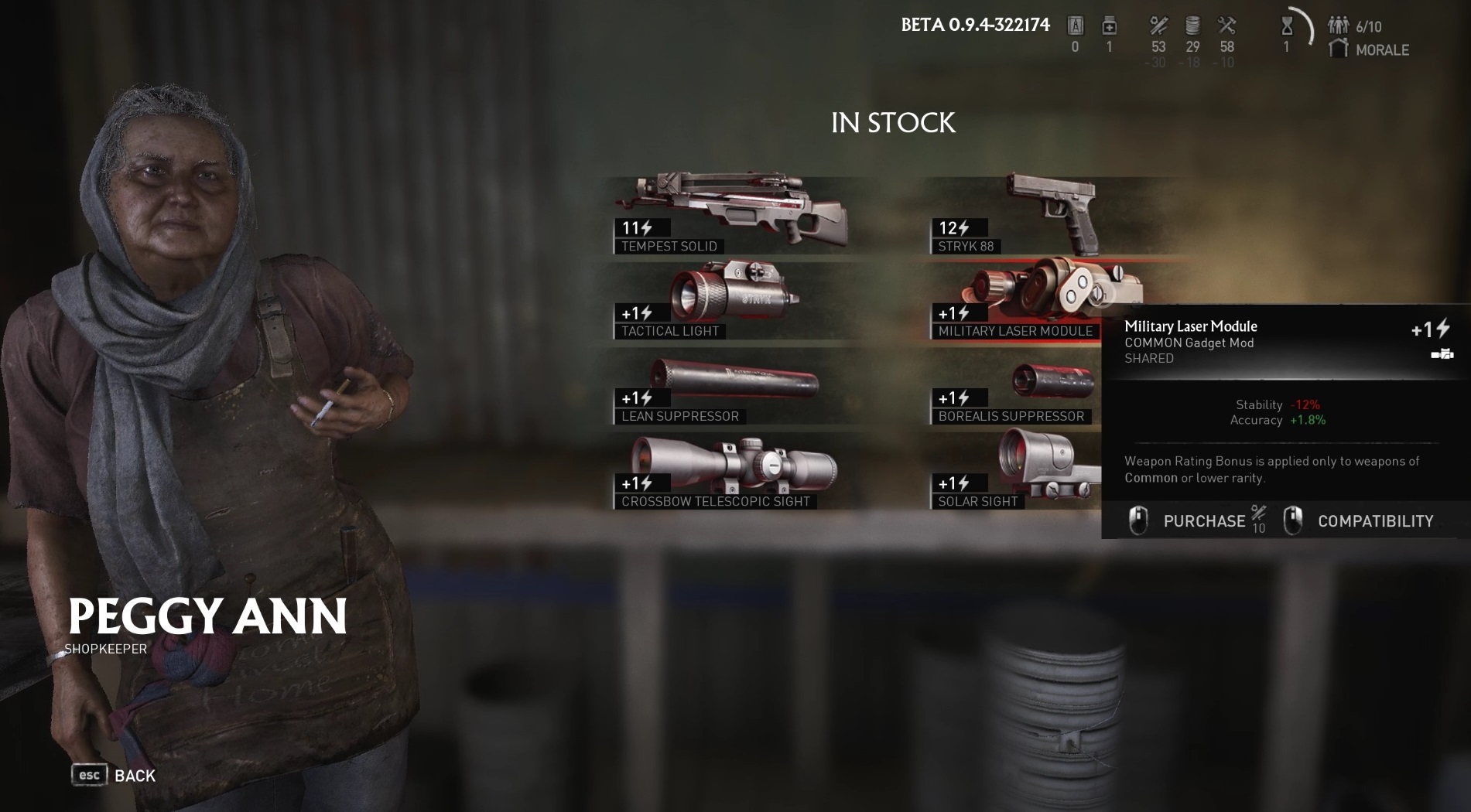 The more time I spent with the beta, the more I came to appreciate how deep the rabbit hole goes. On top of the different mission types and loot scavenging you’ll be doing therein, Overkill’s The Walking Dead also has a base management system, and MGS 5-style follower recruitment and missions. The loot you gather in the field is tallied up and sorted into the different resources needed for camp survival. Your camp has needs, so it’s only a matter of time before you run out of something, which justifies having to always be out there trying to make it back.

Followers you decide to risk your life for in these missions – and believe me, it’s not an easy decision – will expand the available skills and amenities your base can provide. The more of them you have the more you’ll be able to send on scavenging missions of their own, and the more mouths there will be to feed. As the base grows, so too will your starting equipment and defences. The loop is clear.

Overkill’s The Walking Dead thrives on its handling of scarcity, and limitations. This is what’s essentially going to make or break the game for you. If you like the Far Cry 2s, and PUBGs of the world where friction is a necessary and core part of the experience, the game will impress. If you’re looking for a mindless zombie shooter to pass the time, this is categorically not it.

In hindsight, I should have known that this is exactly the kind of zombie shooter the Payday team would make.