Cheap, emulated re-releases of classic consoles have been around for many years now, but with Nintendo’s release of the NES Classic, everything changed. No longer was the retro throwback ‘micro console’ the realm of unlicensed, piracy-happy boxes – now, these little boxes are legit. They’ve gone straight. The latest company to joint he fray is SNK with the appropriately-named Neo Geo Mini.

The Neo Geo Mini presents a unique opportunity compared to other consoles of this type. It’s still easy to dig out a NES, SNES or Mega Drive and some carts, for instance, or pick up some on eBay. The Neo Geo has always been an item of premium luxury by comparison – expensive back in the day and more expensive still now, they’re in no way as readily available.

Thus we end up with the Neo Geo Mini, a nifty little micro-console that brings those beloved ‘premium’ games home in their most accessible form yet. Like most micro consoles, it’s a welcome little trip down memory lane – though one, as ever, with caveats. 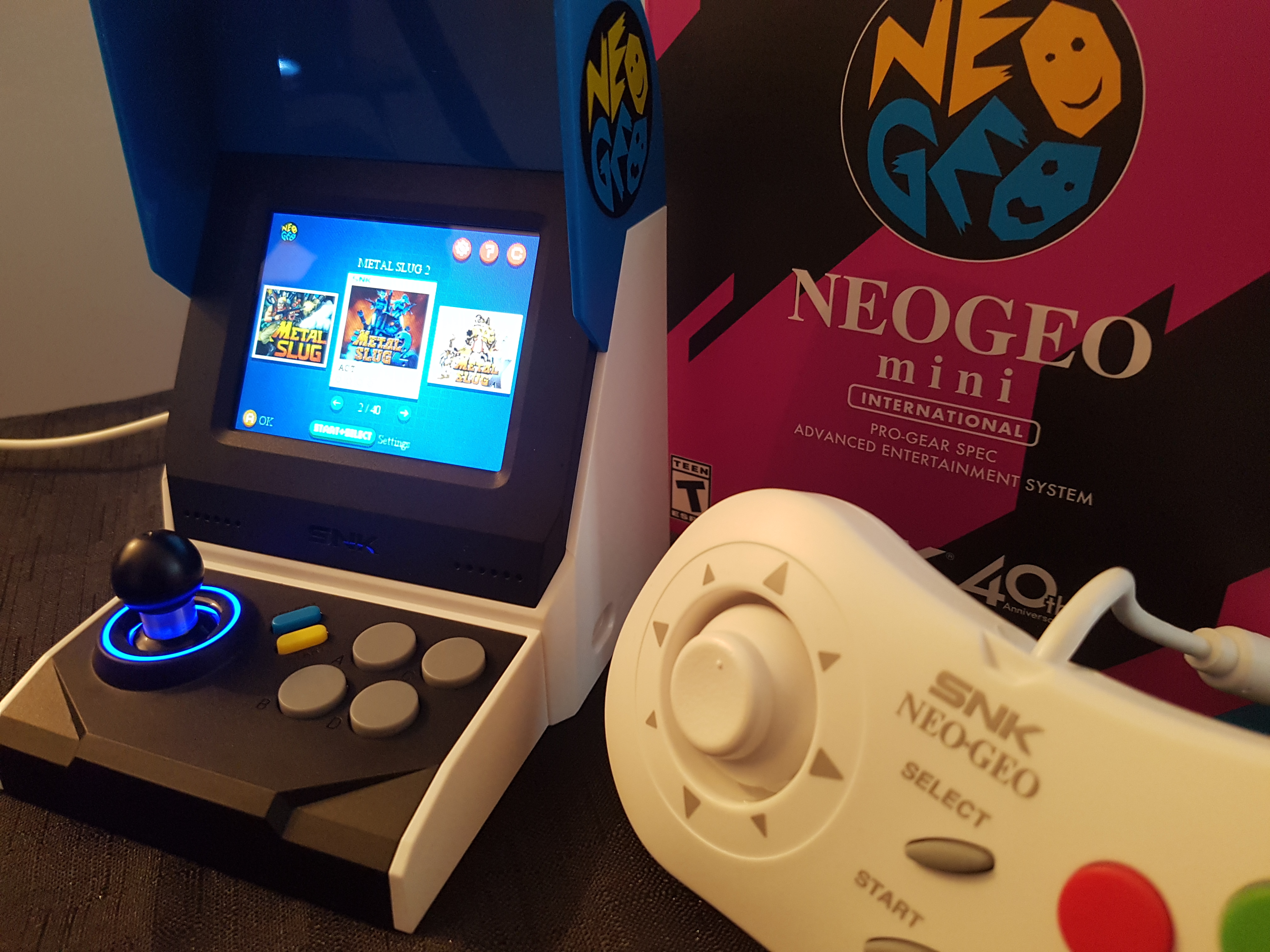 The most striking thing about the Neo Geo Mini is its design, so that’s a natural place to start. It’s a gorgeous little thing heavily inspired by the arcade cabinets of the day, with SNK seeming to know that few have nostalgia for the Neo Geo home console so much as the arcade originals.

As such you’re treated to a lovingly-crafted recreation of those cabinets that comes in two flavors – a more immediately striking and colourful asian variant and a more simple Western release that features the blue, black and white colour scheme pictured above. The little box can of course either be played stand-alone as a mini arcade cabinet or plugged into a TV via HDMI.

Everything strives to be ‘arcade accurate’ to a degree – so there’s stickers that you can stick to the marquee featuring certain games and a correct button layout, while in other ways the design is given a modern twist such as a strip of blue LED lighting that rings the joystick – this also doubles as the machine’s power indicator, and that’s a lovely touch. The machine has a lot of this flair, and it’s reminiscent of the top-shelf swagger that SNK and Neo Geo had back in the nineties. In this sense, it’s worthy to stand alongside Nintendo’s mini console efforts, which also perfectly encapsulate that era of the company.

The design is lovely, then, but Neo Geo is a hell of a legacy to live up to when it comes to hardware quality – and that sort of quality obviously isn’t the sort of thing that can be easily squeezed into such a small package. So, how does the Neo Geo Mini fare? Well… is it too cliche to say it’s ‘a mixed bag’? Sorry, I know that’s rubbish – bear with me…

The absolute most important thing, the emulation, is actually remarkably good. It’s an accurate sort of emulation, too, so when Metal Slug overdoes it with the animated on-screen objects it convincingly slows to a crawl just as the original did. To conservationists this is absolutely a feature rather than a bug. 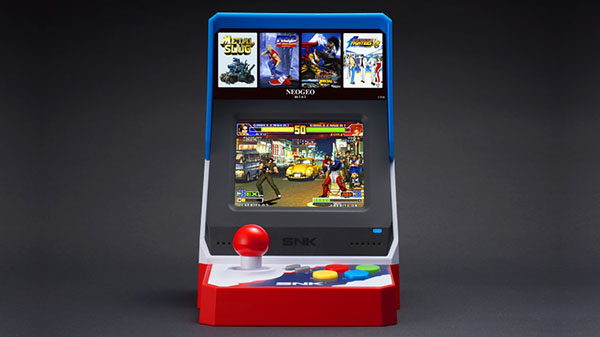 The Japanese design features a different – and if you ask me, better – colour scheme. You can get it on import.

Good performance is important because of the prominence of fighting games among the forty-strong game list: there are five King of Fighters games and three Samurai Shodown games alone – you need the games to be emulated convincingly and as lag-free as possible. The emulation is often the hardest thing for these machines to get right – but here, it’s largely bang-on. Instead, the problems come with the hardware in other ways.

For one, there’s the cheek of the package. Because the Neo Geo Mini is a mini arcade machine instead of a mini console, it doesn’t include a HDMI cable or even a controller. I mean, well – it includes one in the sense that there’s four buttons and a stick on the machine, but additional controllers – the ones you’d use to sit further back from the machine when playing it on the TV – are sold separately. The controllers you can buy are a decent approximation of the original Neo Geo controllers, but they don’t have the quality in their buttons or stick to match their legacy.

Sometimes the decisions strike as SNK wanting to have their cake and eat it too – so the machine is fully portable thanks to its screen, but has no battery and so must be plugged in via a USB-C port to turn on at all. The 3.5 inch LCD screen is actually surprisingly decent, by the way, and is perfect resolution and size wise for making the Neo Geo’s hand-drawn 2D sprite-based catalog shine – but you won’t be taking the Neo Geo Mini on the road easily regardless.

So, a mix, you see? The Neo Geo Mini is an absolutely brilliant and entirely legal way to experience some of SNK’s classic arcade hits in 2018 from an emulation standpoint – and the machine’s gorgeous design will look quite at home on a shelf of gaming paraphernalia. Other elements of the hardware severely disappoint, however, while the software side of things – that is to say the custom-built front end through which you launch games – is about as middle-of-the-road an experience as they come.

Providing it works well enough (and the Neo Geo Mini does), a machine like this will ultimately live or die by its game selection. The Neo Geo Mini has an absolutely stonking game list. Even the weirder little oddities are unique and fun. Because the Neo Geo’s catalog is much more limited than the SNES and NES it also feels like there are less glaring omissions than with those mini machines, too – this is a much more comprehensive record of the Neo Geo as a machine, the glaring lack of Windjammers aside.

All told, the Neo Geo Mini ends up being more than the sum of its parts – and if you’re willing to cough up a bit of extra cash for controllers and HDMI cables, that means it also overcomes its flaws. I’m enamored with it for its looks alone, and it feels like a fitting tribute to that expensive, high-end console of yesteryear. In a sense, even the controller money-grab feels fitting to the brand. If you want to enjoy some SNK classics without breaking the bank, the Neo Geo Mini is well worth your consideration.