The most important thing in any Spider-Man game is the web swinging. Thankfully, hurtling, tumbling, and falling through New York in Spider-Man on PS4 feels incredible.

Insomniac has really nailed the raw, pendulum-like kineticism you expect from Marvel’s youngest and most agile hero. To swing, you simply hold down R2. Holding it down sends Spider-Man into the air, swinging from web to web, or sprinting vertically up a skyscraper if your feet happen to touch their glassy exteriors.

All the flourishes – every acrobatic flip and twist – are handled automatically, but you can time your releases and let Spider-Man fall to build speed, holding R2 again at the right moment to use your weight to fling yourself faster. To add a bit more control, a tap of X shoots out a web and pulls you in, catapulting you skywards like a slingshot. 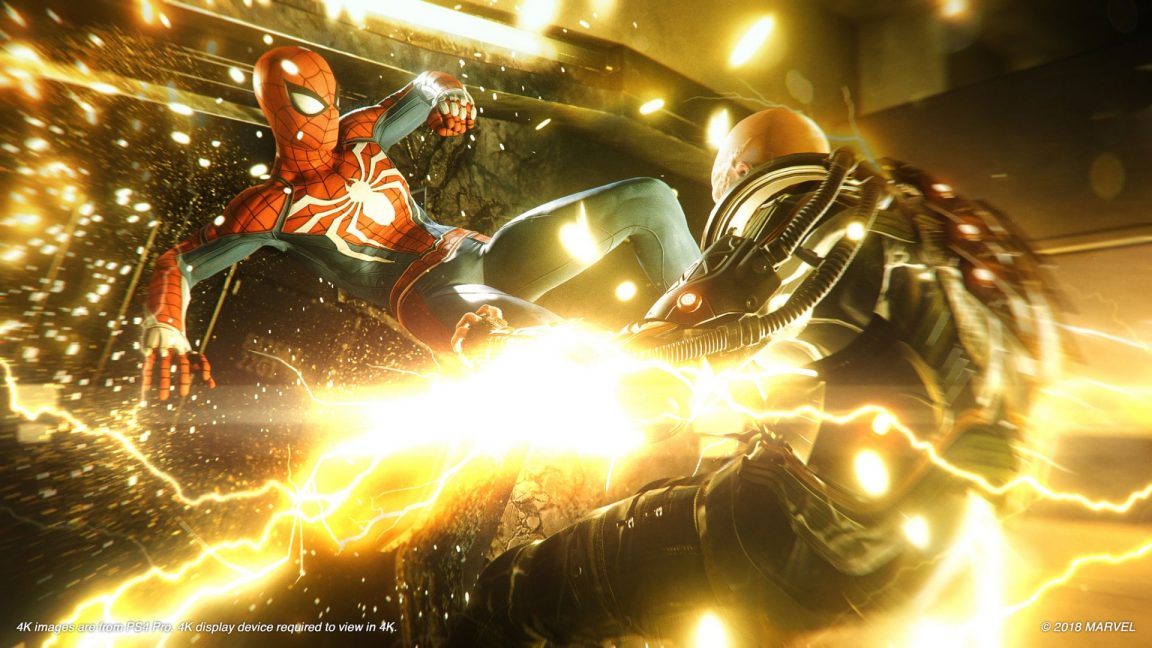 It’s a simple system, and much of it is automated, but it gives you just enough control for your movement to be predictable and still make you feel cool while you’re doing it.

Perch atop a point of interest and the camera zooms out, panning around the wall runner and letting you soak up New York in the glint of dusklight. Just like in Assassin’s Creed, this unlocks points of interest and activities that are visible when you send out a ping with your spider-sense.

These activities are all pretty much what you’d expect from a modern open-world game: chase the person, compete in checkpoint races against a drone, open up supply boxes, and beat up the goons.

Don’t go into Spider-Man expecting it to be revolutionary – it seems like it is just a very competent triple-A open-world action game. 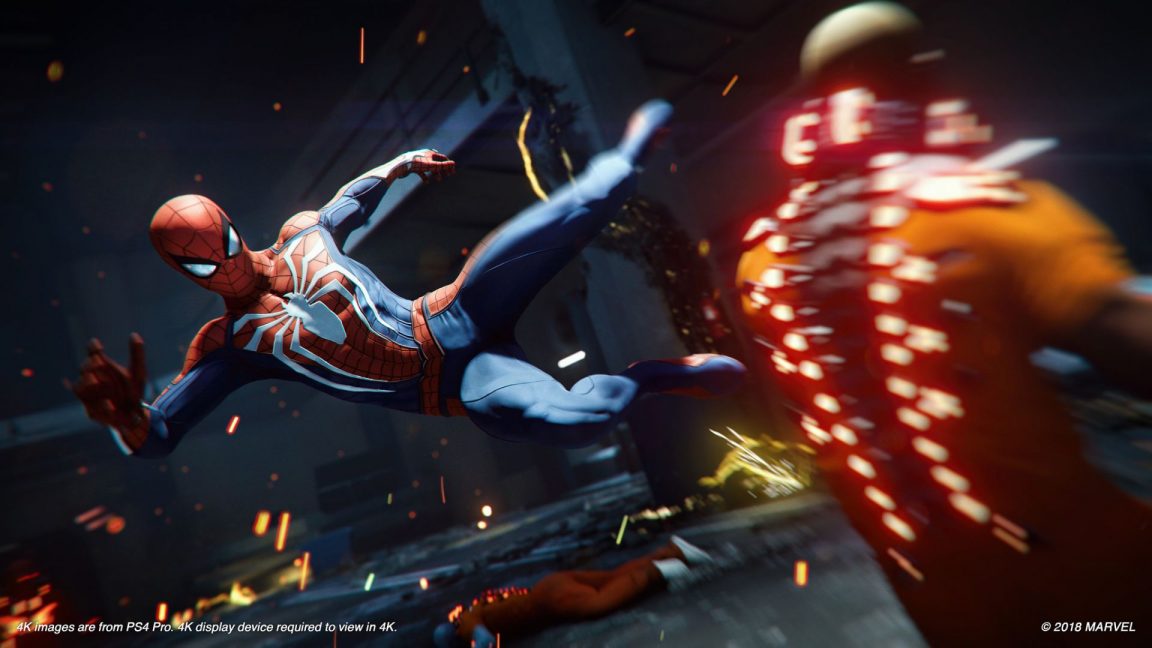 Most of the mechanics are a riff on something we’ve seen before elsewhere, even down to a combat system that’s heavily inspired by the Batman: Arkham series. You can flip between enemies and deliver agile kicks and punches, and you can dodge when you see your spider-sense flash above your head.

Of course, it has its own quirks. Rather than countering when you dodge, you slip under your enemies’ legs or flip over their heads, then you need to hit back with taps of square. Hold square and you can launch enemies into the air before following them up for an aerial assault.

To add a bit more depth, there’s also a gadget wheel you can access to fire off special skills with R1. The ones I saw during my preview were the standard web shooter, the web bomb, and the trip mine. The trip mine can be used as a stealth gadget, setting up up to silently suck in and tie up enemies who pass it, or you can fire it off in combat to pull goons into each other, or walls, with a smack.

The web bomb explodes in a sticky mess, tying people up and incapacitating goons, which is handy when you are dealing with a range of different enemy types – riot shield-wielding fighters, guys with assault rifles, stun batons, and more. 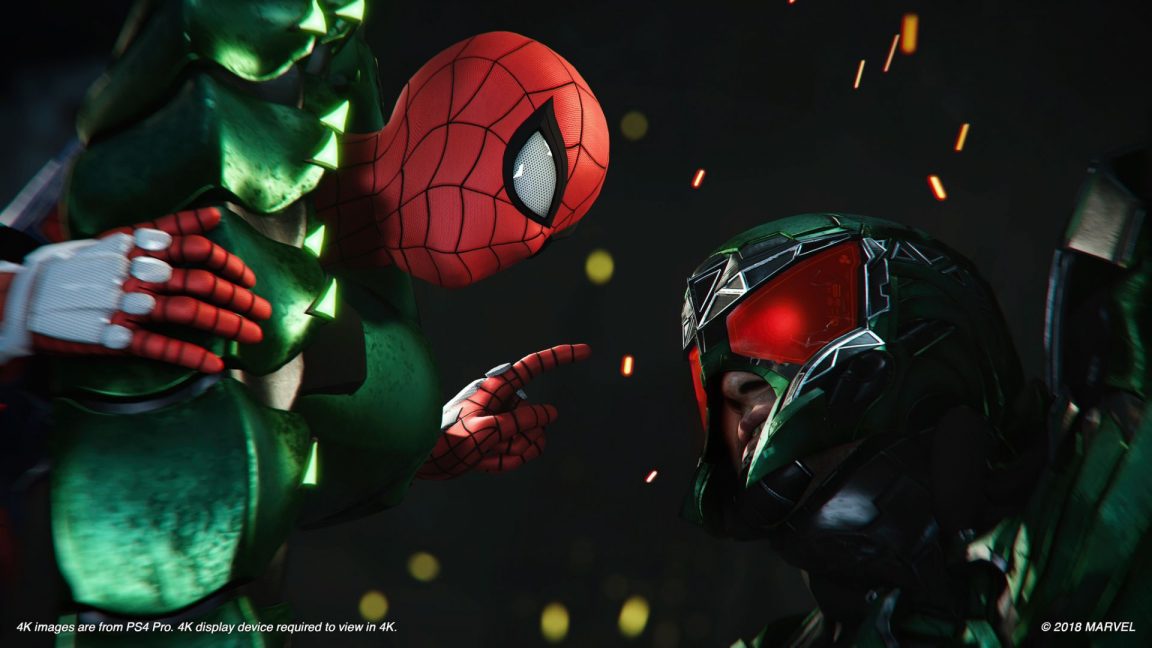 On top of this lot, you can also web up pieces of the environment – from car doors to barrels and even enemy grenades – before swinging them around your head and slamming them onto someone’s bonce. It’s all very responsive and satisfying – at least until you get to a boss battle.

The demo finished with a fight against Shocker. It was repetitive and uninspired, asking you to dodge until Shocker’s shield goes down, hit him with something in the environment, punch him a bit, rinse and repeat until a cutscene plays. I’m placing my bet now that you beat Rhino by making him run into pillars.

Still, Spider-Man does the basics very well. The combat is punchy, fast, and satisfying, and the swinging gives a real sense of momentum. It also helps that the world is gorgeous, the orange sun bouncing off every glassy obelisk you glide past. It’s fun to just exist in the world, is my point, and I’m looking forward to seeing more of it outside of this brief hands-on.

Expect more impressions from us over the next few months – you can read them right here… on the web. Cheers.