This merging of Japanese-style visual novels and Western-style adventure games is an intriguing one.

The first thing that Tokyo Dark tells you once you hit new game is that it doesn’t mess around. There’s an auto save, and every decision you make will trigger it. There’s no going back, no save scumming, and no cheating. In an adventure game with a branching story that’s a big deal, and I’m into it. The tone is set, and Tokyo Dark sticks to that.

Tokyo Dark is an interesting development. It’s published by Square Enix, having come through their Square Enix Collective initiative, which at the time was basically a way for the massive Japanese publisher to offer support to kickstarter projects. With Square’s support Tokyo Dark’s kickstarter smashed its funding targets, and eventually the company picked up the indie game to publish it fully.

“Juggling Ito’s mental state with her ongoing objectives is a major and generally very satisfying component of the game.”

The game is being made in Japan, but it’s coming from an international team of developers with a lot of Western influence. The result, as I mentioned, is an interesting mingling of the styling of Japanese visual novels and classic PC adventure games from the West. It’s a cool mix.

It bills itself as a psychological adventure game, and it lives up to that claim with a deliberately gritty police setting. You’re cast as Detective Ayami Ito, a young detective who is trying to solve a particularly personal mystery – the disappearance of her partner. This barrels through as many twists and turns as you’d expect.

Events begin to take their toll on Ito, and that’s represented in Tokyo Dark’s big unique selling point: the ‘SPIN’ system. SPIN stands for Sanity, Professionalism, Investigation and Neurosis, and the mechanic is basically a way of reading and managing Ito’s current mental state. It’s introduced early on after the detective comes dangerously close to suffering a psychotic break, and after a trip to the hospital you’re introduced to SPIN and have to use it to keep yourself sane while you close the case. 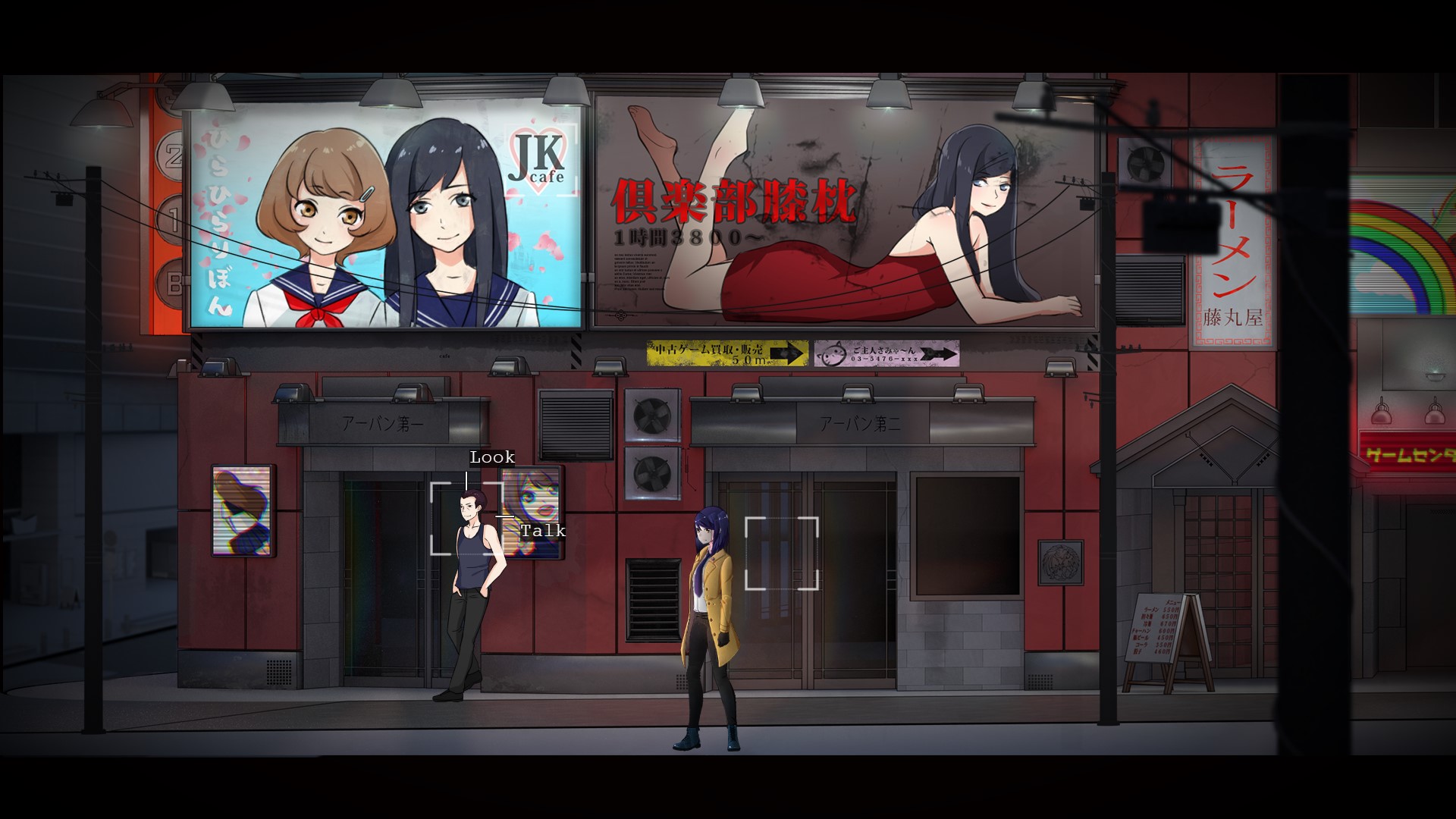 The world of Tokyo Dark is filled with activities, and whatever you do will have an impact on your current status. Taking the time out to eat, sleep or hang out with your pet cat will calm Ito’s mental state, for instance, while repeatedly talking to the same NPCs over and over again or walking around for a long time lost (which so many people do in adventure games) will have a negative impact on Ito’s neurosis stat and also make people in the world around you think of you as a bit weird.

Most interesting of the individual stats is Professionalism, which is determined in a subtle way by your actions as a cop. Should you pull your gun in a specific situation? Should you fire? Should you accept a drink off an informant? Any of these things can have an impact on your professionalism, and not always in the way that you think.

The system is further enhanced by how these systems and stats interact. You might choose to pop some pills that’ll help keep you sane but also make you more groggy, tired and sluggish, thus causing your investigation stat to take a hit. There’s lots of moments and choices like this throughout Tokyo Dark, and this is what makes the SPIN system really stand out. It’s not just a read-out of Ito’s mental state, but also an indication of how the game is changing around you based on that state. Juggling Ito’s mental state with her ongoing objectives is a major and generally very satisfying component of the game.

The SPIN system is a good idea on paper, though the execution in Tokyo Dark sometimes feels like it’s still a little lacking. The actual system itself is solid and when it does have true, meaningful consequences it’s brilliant, but the consequences are spread few and far between. If you really choose to play Ito like she’s on the verge of insanity it’ll lead to some neat moments, but it didn’t change things nearly as much as I’d hoped. When it gets this stuff right the game soars, but it doesn’t always do so. All of this is generally connected to one of Tokyo Dark’s few drawbacks in general: the game is linear by nature, and thjough you can break sequence it’s very keen to restrict your movements to funnel you towards your next objective. This helps to avoid the classic getting-lost problem many adventure games suffer with, but it does seem at odds with the open-ended nature of the SPIN system.

That side of the game misses the mark just slightly, but Tokyo Dark makes up for it elsewhere. The puzzles on offer are often intriguing and decently challenging without veering into the danger of becoming obtuse and frustrating. Best, however, is the game’s presentation.

Tokyo Dark’s art style is a gorgeous anime-inspired look with wonderfully detailed backgrounds, and its story is a little triumph of twists with some great, memorable NPCs that makes great use of the theme of Ito’s deteriorating mental health. This is what makes it special.

Tokyo Dark doesn’t quite do what it set out to as well as it could, but it’s still a fine experience that excels in certain areas. The story is engaging, the choices difficult and the tone of the game is absolutely spot on. Even where the SPIN system struggles, it does so because it’s an innovative, interesting mechanic. It’s more than the sum of its parts, and if you like a good adventure game you should give this one a try.