We're now almost four years from the announcement of Final Fantasy 7 Remake - and no doubt its development team has faced countless challenges. The biggest is arguably one not nearly as often discussed, however - and it's all about tone.

I'll never forget the first time I saw Final Fantasy 7: Advent Children. The movie sequel to FF7 is a weird little thing on many levels, packed with fan service and stunning-looking fight scenes, though the thing that stuck with me most throughout the film's run time was the way the cast of FF7 was represented.

The curiosity of Advent Children is perhaps best shown in the first words said by Barret, hardcore eco-warrior to the point that he's willing to sacrifice innocent lives to protect the planet. With ShinRa defeated, in the opening segments of Advent Children he calls Cloud to celebrate - they've found oil. Barret, the eco warrior, so furious about ShinRa harvesting the planet's Mako energy, is now happy to go drilling for oil. It always felt off.

Barret is an easy example, low-hanging fruit. The idea is that in Advent Children Barret is helping to get the world back on track, finding ways to provide power in a Mako Reactor free world. It doesn't dull the contradiction, however: in the real world, we know oil to be a particularly dirty form of power that can be devastating for the environment when extraction goes wrong. It feels like something that Barret would be inherently against - "The planet's dyin', Cloud!" - but in Advent Children he's all for it.

The same is honestly true of much of the later extracurricular Final Fantasy 7 content, the 'compilation' products. In many ways the original themes of the game and the nuances of character are either lost or fairly significantly adjusted in these spin-offs, prequels and continuations.

In other characters the differences are more subtle, and some characters do come out unscathed, but between this and the casual revival of dead characters, in turn undermining solid plot beats and death scenes in the original game (Hello Rufus and Tseng), the compilation has always had what's felt like a flippant approach to the original source material - and in a remake that approach will come under much more scrutiny from fans if repeated.

Every time I see people talking about the Final Fantasy 7 Remake, the focus is firmly on the size of the game and how impossible it'll be to build in the modern age. Even if the game is split into multiple parts, as was the plan a few years ago, it's an impossibly large task. With that said, I've always felt the tonal task before the game is far more significant.

Take AVALANCHE, for instance. FF7's opening casts the player as part of this eco terrorist group. They're classically doing bad things for good reasons, but both the original Japanese and the slightly hokey English translation of FF7 don't shy away from making note of how AVALANCHE is viewed by the world and how their actions are having a greater, not always positive impact beyond what we see. TV broadcasts players can hear don't just show the evil President ShinRa promising to take them down, but also talks of casualties and the death of innocents - and this is before AVALANCHE prompts ShinRa to commit mass-murder by dropping the plate.

This is an interesting proposition for a 2019 Square Enix game. Since the original game released, the heroes of FF7 have been boiled down to their most recognizable characteristics, shipped off to the likes of Dissidia, Kingdom Hearts, World of Final Fantasy and countless mobile games in simplified forms. In the compilation they are likewise depicted as more clear-cut heroes - and one wonders how that now settled image will interact with the reality of what Cloud, Barret, Tifa and others are like in the earlier stages of FF7. They eventually become those heroes, parachuting into Midgar to save civilians two discs and 20-some hours later - but it takes them a long time to get there.

Will they be shown as they were in the nineties, will they simply be different, or will the narrative dance around the matter? I could certainly see the latter - just as Batman vs Superman coyly had Batman declare that an area is empty of civilians before the movie engaged in Man of Steel levels of wanton destruction yet again.

The real question is if Square will want to embrace that side of these characters at all. By all accounts, many of the story changes Final Fantasy Versus 13 underwent to become Final Fantasy 15 softened protagonist Noctis and his nation, Insomnia. The suggestion is that Versus was set to be a more morally grey story about a nation that believed in death worship with Noctis more difficult to relate to - but FF15 instead features one of the most charismatic, grounded leads in the series who is clearly nothing but a good guy. It's far easier to have a nice, relatable hero.

This isn't just about AVALANCHE either, but moments scattered right throughout FF7. People always bring up Cloud cross-dressing - and yes, in 2019 the attitudes shown in that scene certainly need to change - but I also can't help but think of scenes like when Cloud is mind controlled and physically attacks Aerith. This is an easy scene to get away with with deformed cartoonish character models, but in a photo-realistic setting this is the sort of scene that could quickly become something harrowing or unacceptable in a T or 16-rated game. 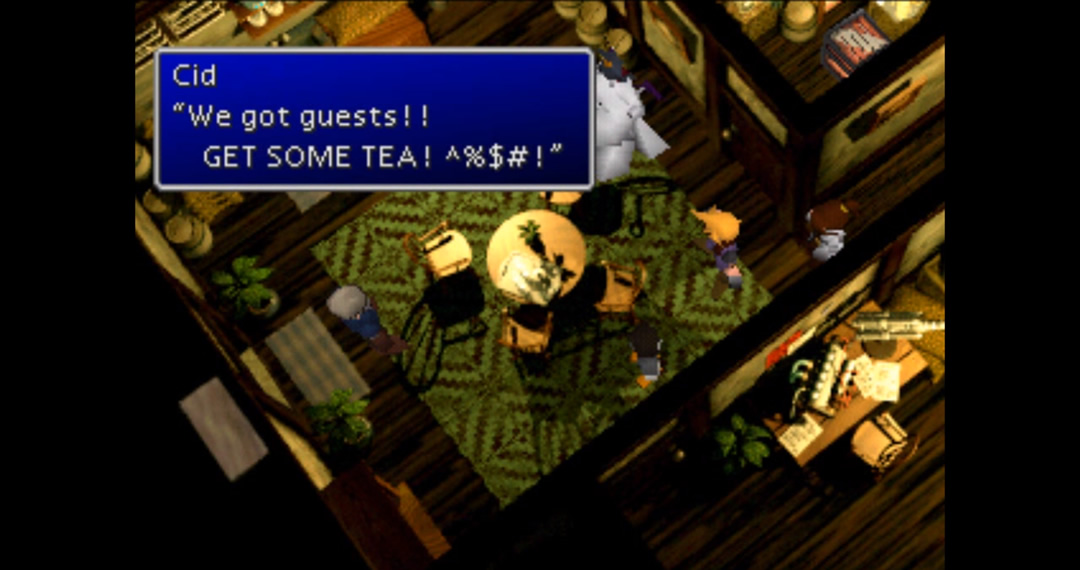 The shift to a more realistic art style combines with cultural shifts in general to present some challenging predicaments. Cid's verbally abusive relationship with his assistant Shera has always been uncomfortable, and it's something that could easily take on a grimly different status in a more realistic, voice acted depiction. Cid being a swear-happy grumpy old geezer is played largely as endearing and is softened by censored text boxes, but if he starts cursing out his devoted live-in assistant in a fully motion captured, voice acted performance it could turn nasty in a way that risks turning people off the character. This is a difficult one to fix as it's key to Cid's character arc, which does end in an apology and the pair eventually marrying in one of the compilation titles.

It even applies to FF7's most famous scene; people accepted a brutal death being a nevertheless bloodless one in a CGI story scene back in 1997 - but with heightened realism, that will be a more difficult sell.

This is where Final Fantasy 7 Remake really has its work cut out for it, and where the task before Square Enix is a very different beast compared to that Capcom had when approaching Resident Evil 2 Remake. The politics and themes of Resident Evil 2 are quite simple. It's about survival, scares and evil scientists who went too far. RE2 remake uses the more realistic tech for heightened scares and a few extra scenes that better tug at the heart strings, but at its core it is the same. Ultimately, those themes are easier to replicate in 2019. They've not really aged.

Final Fantasy 7 is a complex game in many ways. It's sprawling in scope, but it's also a game with surprisingly real, delicate themes despite actually being about an evil lifeform from outer space. It's often surprisingly tender and real - but that reality is also frequently accompanied by a sort of gleeful, camp absurdity that in 1997 didn't feel all that jarring. It was the right amount of sincerity and crazy in the right package at the right time. It was lightning in a bottle. In 2019, with games more filmic than ever, such results are not guaranteed.

I'm extremely excited to see what Square Enix does with FF7 remake, and I'm hopeful we'll learn more about what direction the team has decided on very soon. It almost surely can't be as faithful as RE2 by design - and that in itself is exciting. In the meantime, if you want to see just why it'll be so impossible to replicate, the original Final Fantasy 7 is now available on Switch and Xbox One, as well as the previous PS4, mobile and PC releases.