Zombies, zombies everywhere. You can't stop them, you can't hide from them, and they aren't going away any time soon. Dave Cook's bored of the outbreak.

Monday mornings are ace because they mark the start of another week of news, full of new things to write about and shifts in the industry to keep an eye on. It's exciting, and I was particularly looking forward to the announcement of new Sleeping Dogs story DLC.

The announcement came out of New York Comic-Con, and as it happens, the 'Nightmare in North Point' DLC is a zombie expansion. Now, don't get me wrong here, I really enjoyed Sleeping Dogs a lot, and I sunk mad time into it, but more zombies? I'm not so sure about that.

Do we need more of the brain-chompers glutting up our screens? Is this one zombie too far? The DLC will probably be a lot of fun, and hey, I like fun as much as the next person, but isn't it time that the industry found another trend to bleed dry?

Back in the day zombies were something to be feared. They were shuffling, unfeeling, emotionless husks that couldn't be reasoned with, and don't forget that they were once people too.

The original Resident Evil gave its zombies a modicum of humanity through hidden journals written by victims, tomes that would become more incoherent as the days wore on, charting their descend into the zombie fraternity. That was kind of creepy back then, and lent the horde some narrative weight.

Now they are just easily defeated, faceless fodder for whatever weapon your character happens to be wielding. They're combo fuel, letting players rack up silly kill counts with minimal effort for our amusement. That's also why they aren't scary any more. 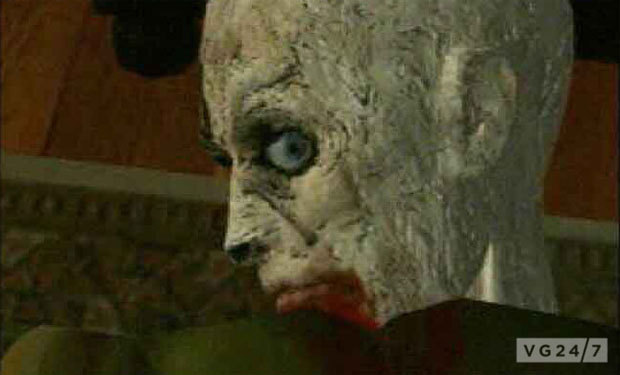 Anyone remember when this used to be scary?

Resident Evil 5 tilted the genre on a downward slope by ramping up the guns and ammo count - as well as Chris's forearms, which he uses to punch a boulder at one point - and that really started to take the edge off the zombie menace.

Why fear what you can easily vaporise with some well-aimed buckshot? Zombies have lost their teeth by being over-used and being turned into a comedy side-show in bonus modes and other brainless exercises.

But take something like DayZ instead, and you can actually see where the line is drawn between survival horror and the great fad that is zombie culture. I'm not saying we should kill off zombies entirely, but personally, I'm dead, dead bored of them when they're just fodder waiting to be killed, rather than a deadly force out for your hide.

In that culture, zombies used to be your friends, your neighbours, or even loved ones, so it's kind of jarring to see a brash hero cutting through hordes of them with a nod and a wink, sexual innuendo, and little in the way of thought for what they're doing.

”The days of the dead will probably recede over time and new fads will surely rise, so long as it’s not vampires, pirates, robots or ninjas, I’ll be happy.”

Another great example of zombie themes working well in games is Half-Life 2's Ravenholm. Sure, the head-crabbed populace of the dilapidated town aren't zombies, but that whole section of the game has most definitely been inspired by zombie fiction and culture.

The whole population has been wiped out save for Father Grigori, and it really gets you wondering what the hell happened that things could become so bad. The shuffling head-crab victims aren't easily defeated, they are used sparingly in parts and are more disturbing for the experience.

But today there are countless zombie modes in games, and a slew of games focused purely on the undead menace. It just smacks of a lazy attempt to ride a trend, but when zombie culture is presented well - as in, a proper survival experience - then I think the genre starts to become interesting.

The days of the dead will probably recede over time and new fads will surely rise, so long as it's not vampires, pirates, robots or ninjas, I'll be happy. Oh sod it, it's probably going to be one of those things isn't it?