Don’t worry, I know you’ve probably watched a load of zombie fiction and you know how these things start, but you didn’t slip into a coma and miss the first three Zombie Army games.

One and two were standalone Nazi Zombie DLC packs for Sniper Elite V2 back in 2013, while the third came bundled as part of the remastered Zombie Army Trilogy on current-gen hardware a couple of years later.

With four player co-op, a tough, replayable campaign, masses of different types of zombies, and a big fat “4” in the name, it’s easy to draw comparisons between Zombie Army 4 and Valve’s fan-favourite and long-dormant Left 4 Dead franchise.

After thoroughly testing the water with smaller projects, it looks like Rebellion has committed to stepping up and making the game Valve doesn’t want to, with this much-expanded and fully-featured release.

Once done punting a zombified Hitler into the flaming depths of hell at the end of Trilogy, the Allied Resistance was starting to turn the tide against the remaining dead. But now when resurgent flocks of new and deadlier enemies start to shamble across Europe, it’s up to a fresh team of diversely capable fighters to crack the cypher and beat back Hitler’s hordes once again.

There were whiffs of nostalgia in Zombie Army Trilogy’s synth-laden soundtrack, but Zombie Army 4’s campaign draws more heavily on a retro B-movie style with levels that rampage through infected Europe with set-pieces in the canals of Venice and a undead zoo alongside the more typical, but no less terrifying, ruined hospitals and blighted bunkers.

It reminds me, in a good way, of what Call of Duty started to do around the Black Ops 1 era of its zombies mode, and lightens the tone in contrast to the gristly gore and stronger horror elements in the moment-to-moment.

Separated from your party or playing solo, the hellish screams of hidden enemies, coupled with their encroaching numbers and putrifying, unnatural glowing-eyed design, makes these zombies daunting opponents rather than impotent meat to be mown down.

Along with the rank-and-file Nazi grunts, there are towering, mini-gun weilding heavies, exploding suiciders, scuttling crawlers, and heavily-armoured nightmares who seem to turtle up and march at you in line formation. Not to mention the occult magic-using commanding officers, who constantly reanimate unless you can skewer them through the heart with a well-timed shot or ten.

The B-movie inspirations really come out in the boss monsters though. In one early campaign mission you fight to clear out a bunker when the meat/metal abomination that is a zombie tank splutters over a hill, spewing ragdolling zombies out of its back doors as it peppers you with heavy fire. Violent hilarity ensues.

Despite their powerful attacking clout and general durability, you’re not powerless when fighting back against the zombies. This is still a game with roots in the Sniper Elite series, so Zombie Army 4 shares the same crunching combat and squelching slow-motion kill shots you’ve gleefully winced at before.

From the crack of a semi-auto rifle to the punch of a trench shotgun, your weapons are powerful tools that stand up to even the toughest enemy types. But they need to be wielded with precision to be most effective. With less cultured bangsticks, the head is always best, but with a sniper in hand, well-placed shots to the unbeating heart, decaying liver, or crumbling testes will do just as well. 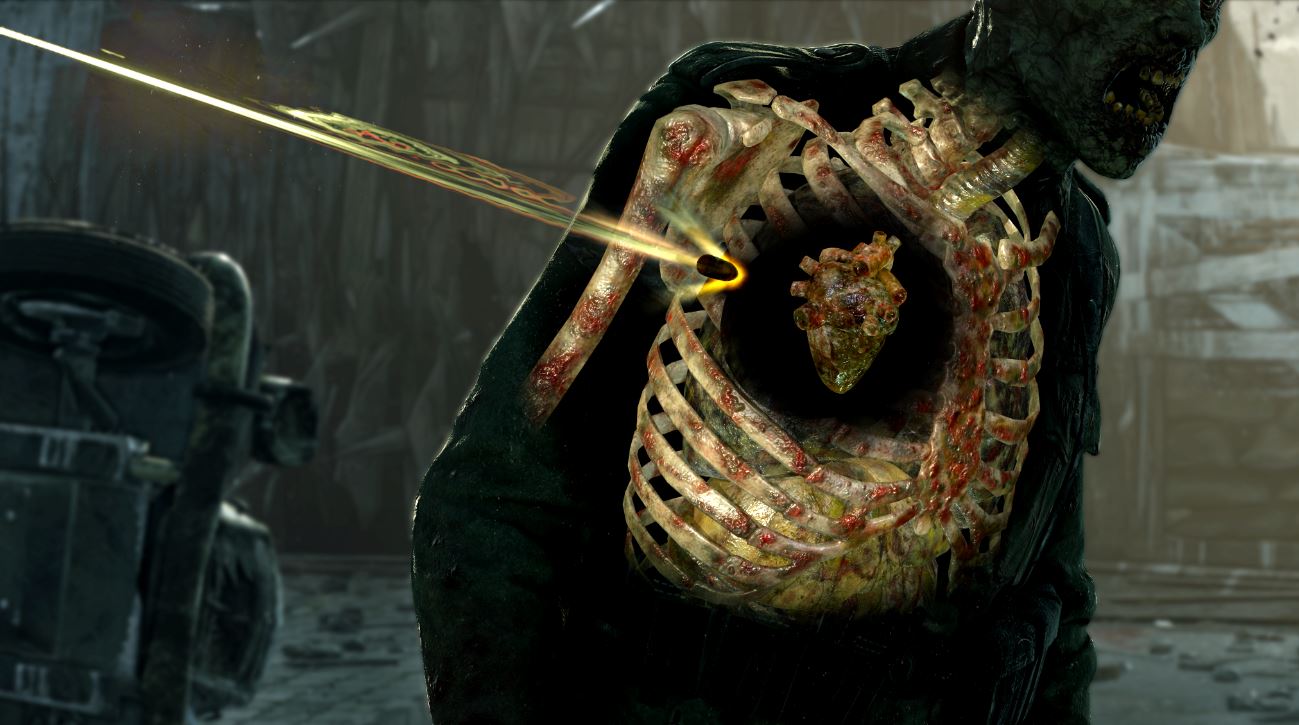 This tactical edge works both ways. When you’re picking off stragglers with a cool head and enough lead up time, you feel like the most badass deadeye to ever splat a zombie - each perfectly angled hit is rewarded with a skull-shattering closeup.

But when things get a little more hectic and your desperate shots sink dozily into decomposing flesh with surprisingly little effect, it’s easy to panic in the face of waves of unrelenting foes.

There are also a variety of traps and grenades to deploy, while different characters also have unique abilities that spin up over time. These do things like charge up a shot to have greater destructive penetration, or increase your character’s speed, meaning you usually have a choice of how you want to approach a situation.

I say usually, because even on regular difficulty, Zombie Army 4 isn’t a game you can just run-and-gun through willy-nilly - you’ll just run out of ammo and get caught in a death cycle if you try to brute force a large area. If you’re playing with a team, you’ll need to partner up to secure your objectives, as well as scour side-rooms and hidden nooks to refill your equipment.

The quest steps in the missions I played were straightforward enough - ferret out switches to flip and power a generator, find a way to open a bunker door, and so on - but the action between them was always intense, and littered with new enemy types and encounters.

As your map knowledge increases, I can definitely see the replayability in Zombie Army 4’s campaign environments, especially as you’ll have to plan more carefully for harder difficulties. There’s also a bit of a meta-game of XP and incremental unlocks to progress through as you play more, but it’s unclear how much this will actually extend the afterlife of the game without getting to grips with everything it has to offer for an extended period.

What has obvious replayability though is Zombie Army 4’s Horde Mode, which combines familiar elements like expanding environments from Call of Duty’s Nazi Zombies with the finite wave count of Gears’ Horde and Escape modes.

You start with a pistol, and procure more equipment as you fight against 20 increasingly arduous stages of brain-munchers. Like the campaign, you’d struggle to brute force later rounds even on normal, but there are a few tougher difficulty modifiers to battle through when you’ve got your eye in.

Once you hit that magic 20, you can choose to escape the carnage or stick around for the ultimate incremental challenge. 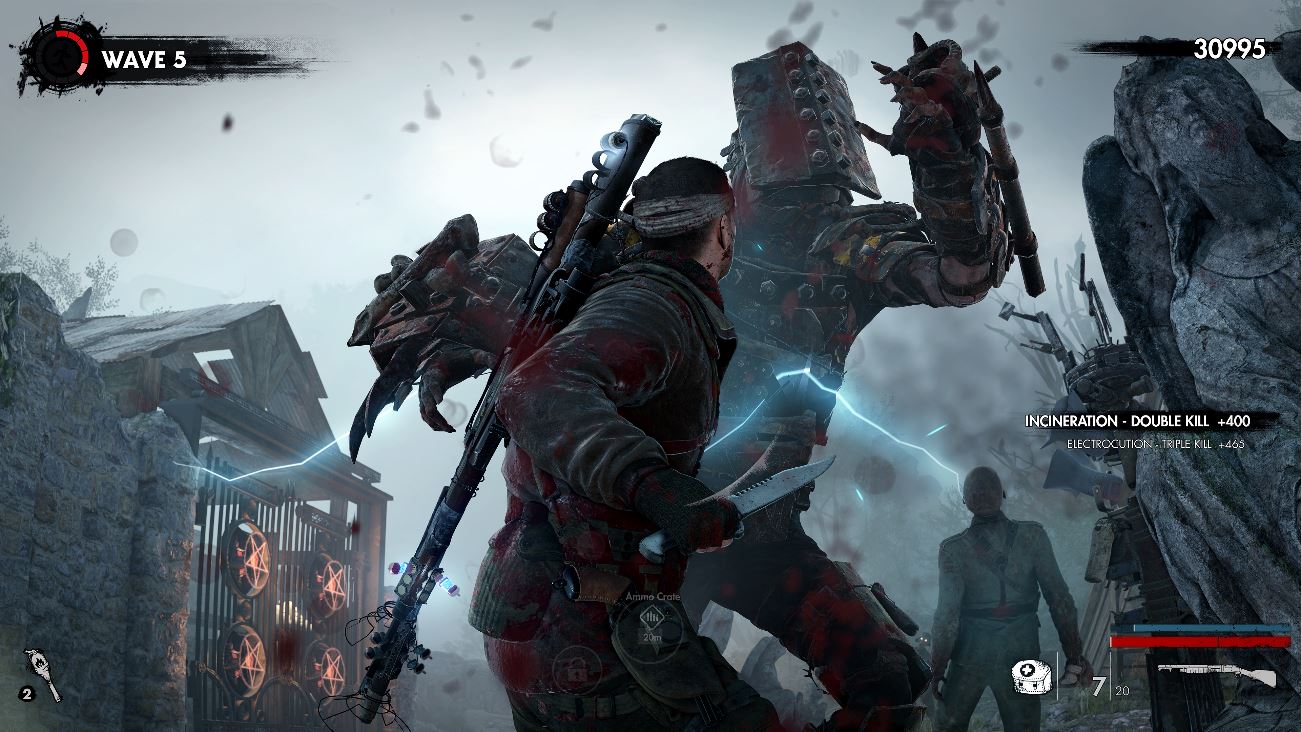 My favourite map is a subterranean tunnel, which starts out in one long stretch before opening up to include water traps, claustrophobic passageways, and high walls that zombies eerily scrabble over - but there are more open ones as well.

With this supplementing the more story and level-based campaign missions, I think Zombie Army 4 has potential to be your new Saturday night zombie smasher, something you pick up with a few friends on party chat and kill time with, especially with Call of Duty giving its hordes a year-long breather. It’s solid co-op action, with a tough, tactical steak and plenty of viscera to chew through.