It's time to befriend the fish people - but to do that you need to get to the secretive Zora's Domain.

One of the four races of Hyrule you need to visit in order to talk about their divine beast is the Zora. Once you've visited Impa in Kakariko Village in the early stages of Zelda: Breath of the Wild you'll be able to tackle any of the four divine beast quests. Here we explain how to reach Zora's Domain and kick off this part of the main quest. 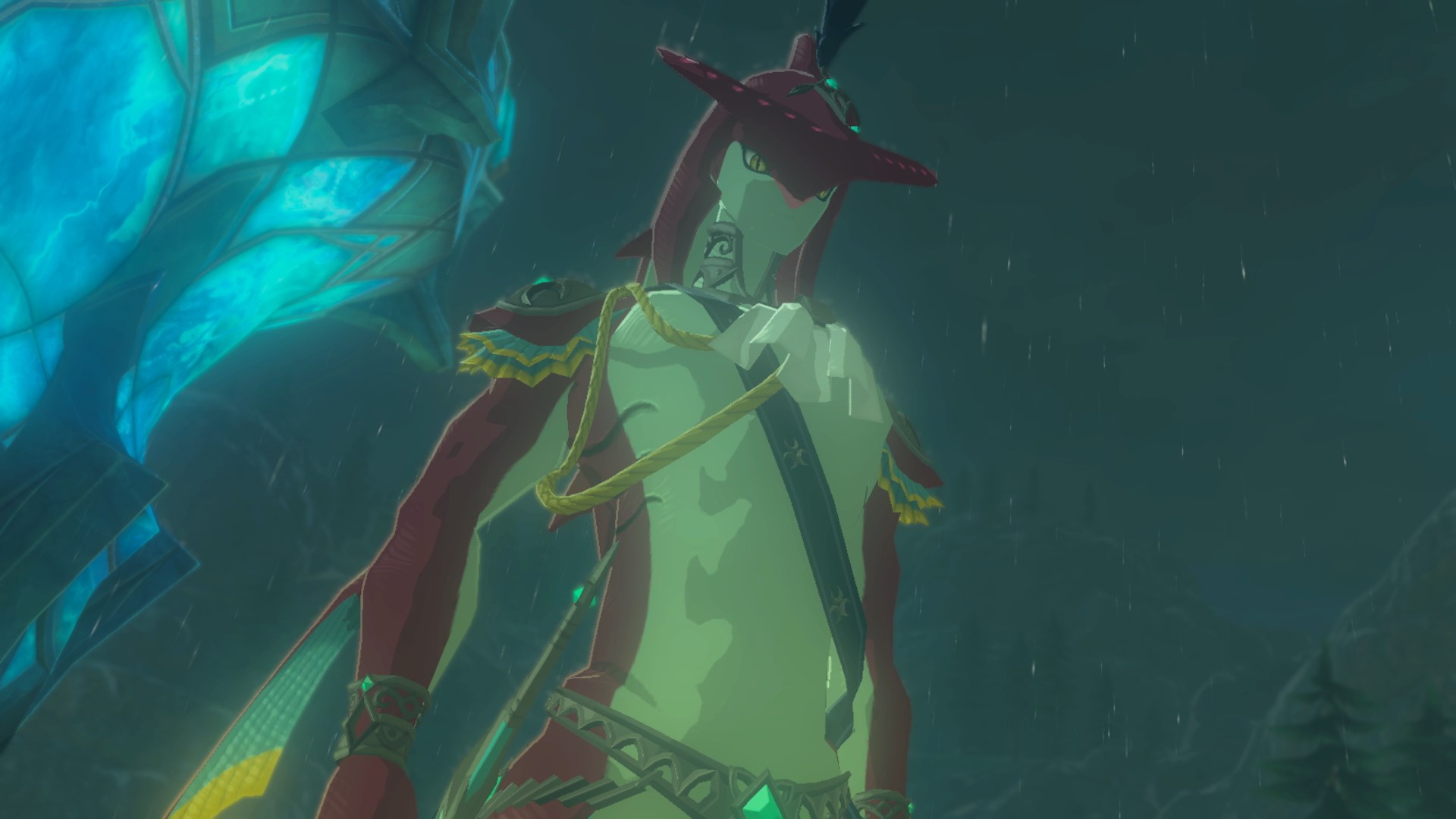 In another Zelda, we'd call this the road to the Water Temple or Dungeon... but things are a little more open-ended in Breath of the Wild. Let's get started.

Meeting Sidon, Prince of the Zora

To kick this quest off you'll need to meet Sidon, Prince of the Zora, on Inogo Bridge. As soon as you get close to this area you'll begin to bump into Zora who'll point you in the right direction - there are a number of them out exploring the nearby lands, and every one will tell you the same thing: the prince is searching for a Hylian. The closest tower to this is Lanayru Tower. The bridge crosses - unsurprisingly - Zora River. This should be easy to find on your map.

After a cutscene and a chat Sidon will task you with making your way up the river towards Zora's Domain on foot - you're not strong enough to swim. There are a range of enemies here, and many attack with electricity. Keep in mind you can make elixir potions that you can take in order to lower the damage taken from electricity, and regardless you should take plenty of supplies as this is a decently long journey.

The path should be clear to you. While it's not an obvious paved road, the entire route to Zora's Domain is littered with blue signposts and blue lamps. Keep following them.

Watch out for the Octoroks and don't be tempted to jump in the river after their loot; the current will sweep it (and you!) away downriver and you'll have to start again. Their loot is valuable, but it's not that valuable, and there are certainly better places in Hyrule to farm it.

As you continue moving up the river Sidon will interrupt you a few times - and the further you go, the more challenging it becomes.

When you reach a cave that's covered in thorns, you can climb around it by heading left. If you have access to a fire rod or fire arrows however, set the thorns on fire to get to the chest within and clear the path.

The first big encounter features a shed load of enemies with shock arrows. Try to pick them off at a distance - if you rush in close you're asking for trouble. Remember that headshots are critical hits - with good bows this should one-shot enemies, and even with less brilliant bows it'll knock the enemy down.

When you reach Zora's Domain, explore and definitely at least activate if not complete the Shrine (Ne'ez Yoma Shrine) nearby so you have a fast travel point to get back here at ease. Once that's done, go meet the king! Story stuff abound. 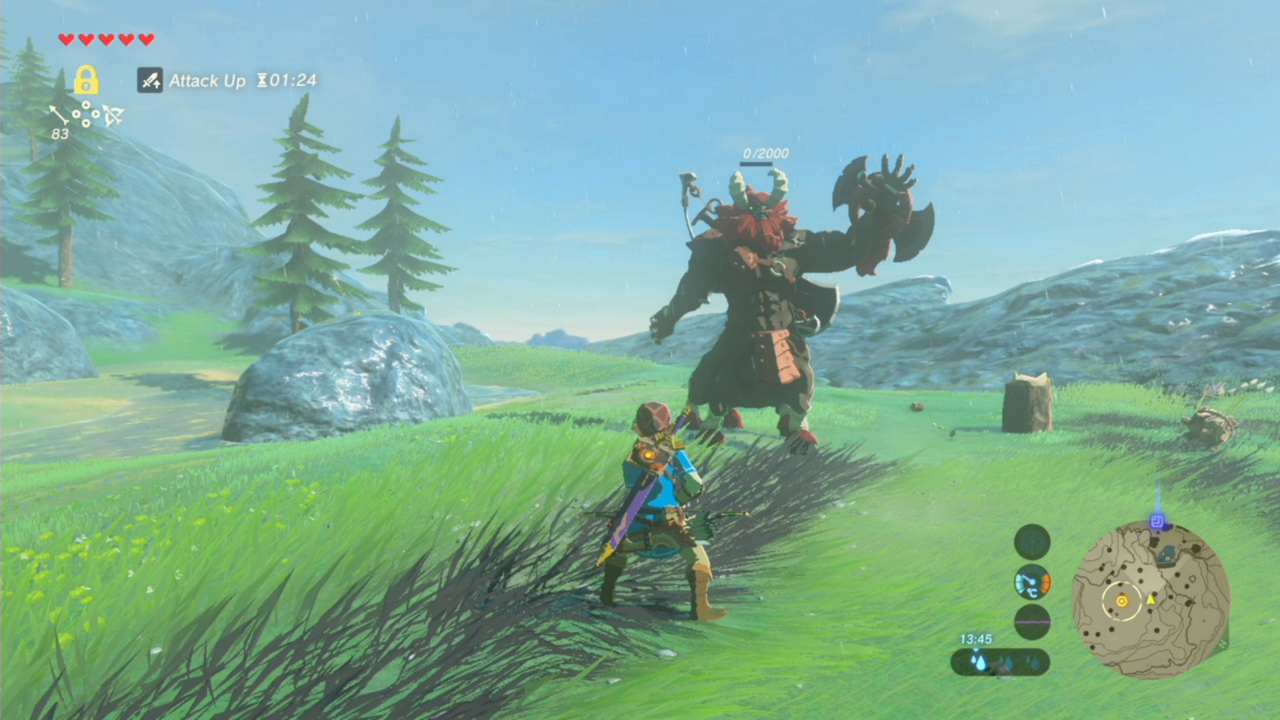 Your first task in this objective is to go down to the main square of Zora's Domain and talk to the guys down there. You'll learn you need shock arrows, and you'll learn that there's a beast nearby who keeps a stockpile of them - a Lynel, half man, half lion. He's deadly. These enemies date back to the first Zelda on the NES.

The first thing you'll want to do is head to a cooking spot (there's one in Zora Domain's inn) and prepare yourself some food. Prepare stuff that'll give you attack and defence boosts if you can, plus health-restoring meals.

Anyway, follow the waypoint and make your way towards the Lynel's lair by swimming up the waterfalls - remember, you'll need the Zora Armor equipped in order to use that skill.

Once you reach the top, don't forget to swap out the Zora Armor - either for your best stealth or best combat gear. Which you go for is going to be largely determined by the choice below...

Getting Shock Arrows from the Lynel

You have a choice with the Lynel - you can either go in geared up and prepared for combat or you can stealth around the arena.

Consider this a mini-boss - he hits hard, has 2000 HP and some very good attacks. Up-close he smashes fiercely so you'll want a high quality shield, while at range he'll breathe fire and charge you. Basically: be careful.

I found the best way to tackle him was to stay relatively close and near his hind legs at all times, and to use weapons I could attack quickly with so I could quickly get my shield back up.

If you go the stealth route, sneak around the combat area without Lynel noticing you. You'll find shock arrows he's presumably been using for target practice slammed into most of the trees around the area. You can get the 20 you need to continue this way easily enough.

If you fight, however, there'll be decent loot in it for you plus even more shock arrows since after the fight you can pick up all those all around the arena and Lynel drops a bundle. Do what you have to.

When you're done, go meet Sidon at the waypoint near where Vah Ruta is resting. It's time to execute your plan - even if it's all a bit crazy-sounding.

Zora Prince Sidon has built a plan, and though it's risky to storm the gigantic robot elephant on its own turf, Link is always up for the challenge. You should've picked up the lightning arrows from the Lynel nearby as part of the previous quest, and now it's time for a full assault.

You'll need your Zora Armor equipped for this mission, and consider upgrading it at a fairy fountain before you go further. You should also stock up on any supplies and prepare any food you think you'll need: this leads directly into the dungeon.

This boss is explained pretty well in the game, but allow me to reiterate also: your task here is to ride Sidon's back and protect him as the two of you push forwards to get close to Vah Ruta.

Vah Ruta isn't going to take that sitting down, however - and the beast will deploy ice in an attempt to stop you. First this takes the form of giant cubes of ice that he'll hurl at you. You'll want to switch to regular arrows and shoot at them - the arrows will shatter the ice so it can't hit or hurt the two of you.

On later phases Ruta will also send spiked balls of ice after you. Unlike the blocks that are thrown at you these will hit the water and follow behind you, homing in on you, so keep an eye out for them.

In the final phase you'll have to contend with both at once, so be careful and turn the camera a lot to keep track. Generally speaking the two threats will alternate - first a block, then a spiked ball, and so on and so forth.

Through all of the phases of the fight, once Sidon can get you close enough you'll approach the waterfalls that lead up Vah Ruta's body. Hit A as soon as you reach the waterfall to swim up it. When you hit the top, you'll naturally pull into a glide with your paraglider. Pull the right trigger and make sure you're switched to shock arrows.

Time will slow for a while here, governed by your stamina meter. This is classic boss fight stuff: hit the bright glowing red weak point with shock arrows. Put the arrows into their target and then move on to the next.

You'll have to do this four times, because this is a Nintendo game and those old rules die hard. When you're done, there'll be a cutscene and you'll finally be on Vah Ruta proper. It's time... for a dungeon. A real, proper one - or as close as Breath of the Wild gets.