Xbox rolled out a new update today that allows you to change your gamertag to any name you want – even if it's already taken.

In the past, if someone already had the Gamertag you wanted, your only options were to either choose another name or wait for the player to change their Gamertag so you could claim it. Now, you can change your tag to anything you'd like, and if the name is already taken, Xbox will auto-assign an ID suffix of numbers after a #-symbol to differentiate you from everyone else.

Thankfully, the ID suffix font size is smaller and the text color is different so that the focus stays on the name you choose. Here's an example Microsoft detailed in a blog post today: 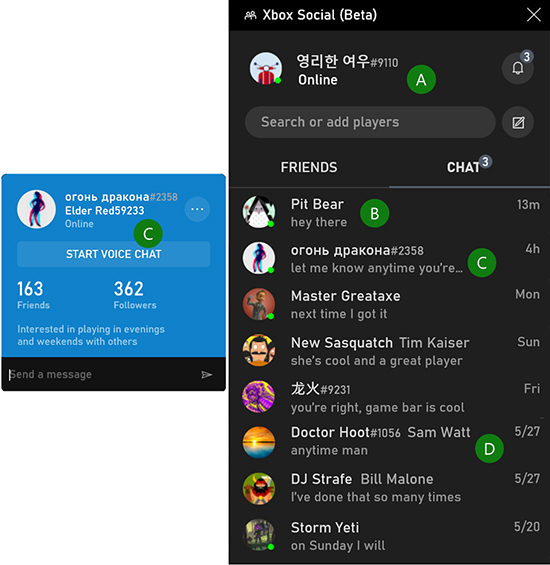 The bubble marked D is a great example: the Gamertag "Doctor Hoot" is already taken, so when Sam changes his name to "Doctor Hoot," Xbox auto-assigns the suffix "#1056" to differentiate him from the original. If you are the first person to claim a Gamertag, (ex. the bubble marked B), Xbox will not assign you a suffix.

This update is live now for PC Xbox app and Xbox Game Bar, and Microsoft says the new suffix system will start to reflect on mobile devices and consoles over the next year. Microsoft disclaims that if you change your Gamertag now you may not see the full changes take place immediately.

The update also adds support for 10 new alphabets. Microsoft says with this addition, Gamertags will support more than 200 commonly spoken languages. The new alphabets include: