Xbox One's policies are set and now it's time to focus on the games. VG247's Dave Cook plays Titanfall, Dead Rising 3, Forza 5 and learns more about Project Spark to get a feel for Microsoft's future.

I was going to start this article by re-capping Xbox One's policy woes to show how the company has come from a sticky situation to having a strong suite of IP in a matter of months. Truth be told I'm bored of it now, and I want to just focus on the games in this piece, because that's why most of you buy consoles in the end isn't it?

So let's just get stuck in shall we?

I've never personally witnessed one game impact a trade show so profusely as Titanfall. Every journalist and game I've spoken to has said that Respawn Entertainment's shooter is 'game of the show'.

Even as I type this there are eight-hour lines in the gamescom public area to get a two-round hands on session. I just walked past a queue of tired, agitated journalists waiting in line to play the game down in EA's press centre. The Titanfall booth is plastered with more accolade stickers and rosettes than any other game. This game is going to be big.

It's the best game I've played this week, and while you can read my full hands-on impressions and interview with Respawn Entertainment on VG247 next week I couldn't leave you hanging. I played the game on PC, but it's also coming to Xbox One and Xbox 360, but I think regardless of platform the core experience is going to impress whoever comes into contact with it.

Perhaps you've seen this Titanfall gamescom trailer? None of that footage is bullshit. Everything looks and plays like it does in the video, and that goes for how easy and slick the parkour is, to how fierce the Titan mechs are, right down to how visually accomplished the game looks on the surface.

I played a few rounds on the Angel City map seen in the trailer, and it's one of the game's smaller play-spaces. You can navigate the area's many windows, ledges and rooftops at speed, and perform a wall-run simply by jumping into any surface at an angle, all without a single button press. Hoisting is also automatic, and double-jumping over gaps, while hip-firing down to the streets below, only to score a head shot is simply joyful.

It has the twitch gunplay of Call of Duty, combined with new teamwork aspects such as dropping plumes of magnetic smoke to conceal your allies, or working together to bring down mechs with your anti-Titan weapons. Speaking of which, every so often you can call in an order that sees your Titan hurtling into the map from orbit.

Hearing the words 'Standby for Titanfall' then seeing your ride slam into the concrete is genuinely thrilling, but it should be noted that jumping inside the mechs doesn't make you invincible, as they're easily defeated by ground troops. You can't jump, move much slower and are a big target for the other team to hit. It makes sure the balancing doesn't suffer, and that's very important indeed.

Ejecting from your mech is also badass, but I'll go into that in more detail next week. I'm going to stop now as there's so much more to say and if I keep going I won't have much of an article left, but I'm seriously excited about this game for the way it shakes up the twitch shooter template and makes it genuinely refreshing one more.

Besides I still have to talk about Dead Rising 3, which is actually really badass. So yes, I hope this was enough of a taster for now. Moving on... 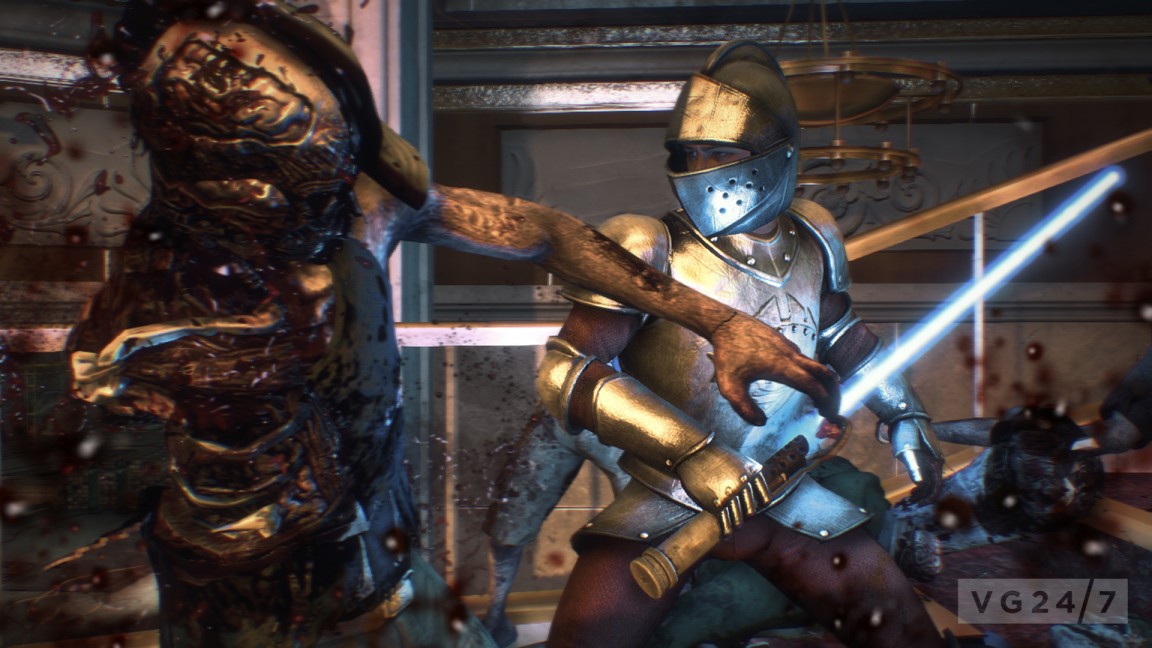 I can't stand the old Dead Rising games. It was the pressures of the time system that put me off, and while you can activate the clock in Dead Rising 3, I think I'll be giving them a miss. But this is also why this new game appeals to me so much. It's the open world setting of Los Perdidos that does it for me, combined with Capcom Vancouver's wish to see you fuck about in that setting as much as possible.

No really, I've just seen a member of the team - as car mechanic protagonist Nick Ramos - combine a Blanka mask from Street Fighter 4 then wear it, giving him the ability to perform the green freak's crouching punch shock attack, frazzling all the undead around him. He then combined a motorcycle engine and boxing gloves to make a pair of Dragon Punch gauntlets. Ramos then starting punching his way through the horde while screaming "Shoryuken."

If you were ever concerned that this game has killed off the silly-gene within Dead Rising's DNA, then don't be. Seriously, it's fine and very, very silly. Not convinced, then how about "Jazz Hands", which are basically big metal gloves with guns for each individual finger? What about combining a chunk of ham and a bottle of whiskey to make a "Spitfire" cocktail? Ramos can then drink it to let him breathe fire.

Combining things is a big part of Dead Rising 3's fun factor, and you no longer have to be at a crafting bench to tack components together. There are safe zones however, and from there you can re-equip anything you've made or found, as well as enlisting rescued survivors to fight alongside you. If you can't be arsed going back to these areas to get backup, simply use the SmartGlass app to call them to your side.

Speaking of which, the SmartGlass app also doubles as a phone, so you will actually receive calls from quest givers and listen to their chatter through your mobile as if it were a real call. You also have a real-time map, the ability to drop flares from above the city to distract the horde and of course, lay down artillery strikes.

We were told that today's build was just "weeks old" but it's already looking fun with an insane number of zombies on-screen at any one time. The frame-rate stuttered often, but we were assured that newer builds have addressed the problem. Either way, it's a superb technical achievement. The freedom to mess shit up and have a blast without that damn clock has me very keen indeed. 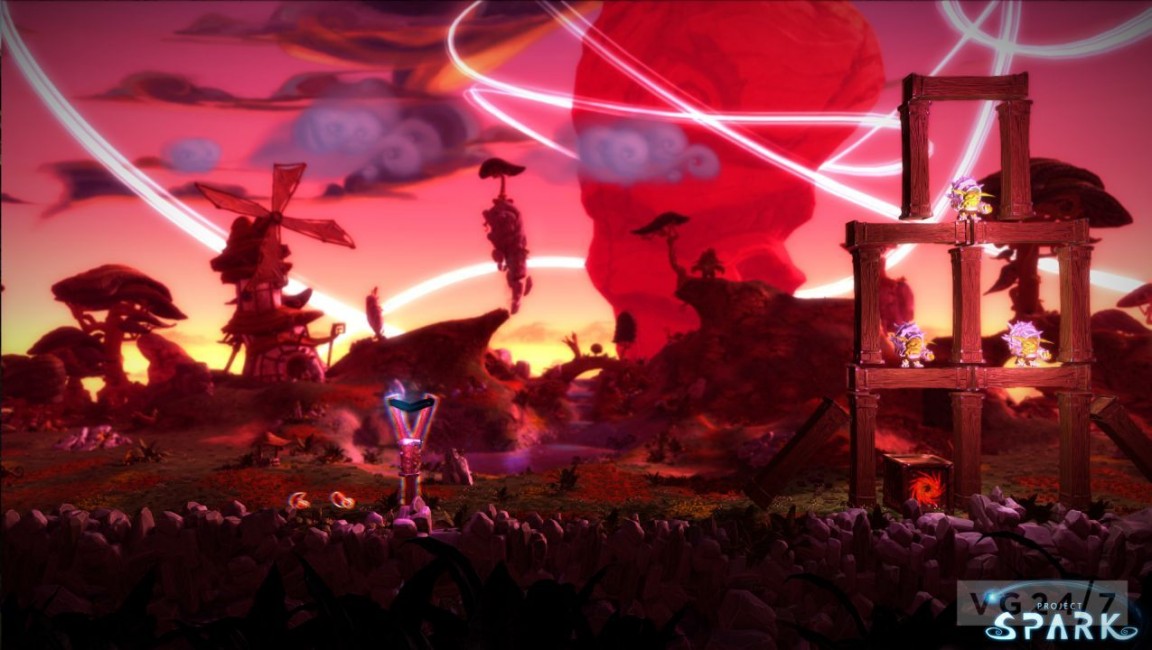 This is one of the most impressive things I've seen all week. No really, it's a very powerful game-making tool for people without the ability to code, and that kind of empowerment should always be applauded. During our session we saw one developer make a level using the game's simple terrain editor, then dress it up with detailed biome brushes that dropped grass, trees, flowers and much more into the world. Suddenly, that grey, empty space was now a tangible forest world.

The dev then dropped in streams, hills and even an quest-giving NPC. Here's the point where my mind just blew up inside my skull. Everything in Project Spark can be given a "Brain", and this determines its logic and reactivity to you, the player. So you can change the demeanour of say, an enemy troll so that it attack you on sight, or shuffles towards you slowly like a zombie. It can be fierce, passive, easily defeated, small, tall, powerful, weak, sad, angry or whatever you want

But when that troll is an NPC you can literally act out how it moves and what it says when you interact with it. We saw the coder moving his arms, dancing a jig and talking gibberish in the room using Kinect's motion and microphone features. On the screen, his NPC copied him in real-time. Once saved, he dived into the game, approached the troll and it played the recorded motion and dialogue back to him verbatim.

It was insane just how quickly the team were able to make levels that looked better than the output of some studios. The scope is simply unreal. We saw an attempt to re-create Playdead's Limbo that looked very close to the actual thing. There were turn-based RPGs, top down god sims, air combat battles, puzzle games, a fully-functioning piano and more.

If Project Spark proves popular enough, it could really shake up the games industry, inspire a lot of young minds to become game developers and help forge the next generation of new game creators. It's genuinely impressive and places so much freedom and creative into the hands of gamers like you or I. This is one to watch for sure. 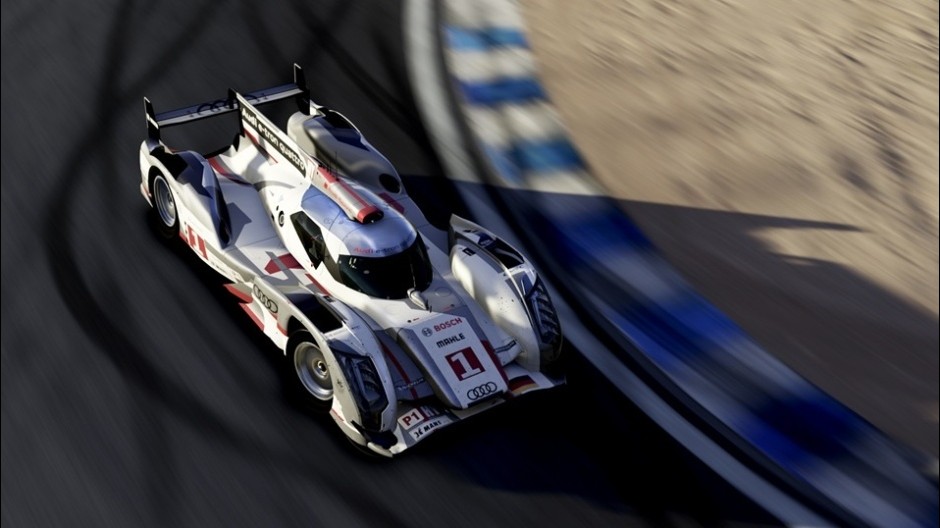 Finally, Turn 10's Dan Greenawalt talked us through the studio's aims with Forza 5, and he stated that it was the studio's most ambitious title to date. I'm inclined to believe him. After all, he commissioned a testing lab that works on ballistic missiles to help the studio test many tire types in order to get the game's wheel physics feeling as realistic as possible. Greenawalt's very passionate about cars, I'm sure you'll agree.

But he's also a humble chap, and always very aware of what car fans want out of their racing games. For example, he said he felt embarrassed by the fact that very few gamers who pick up racing games actually finish them. He said that while most racers start with slow cars on smaller tracks, and build up to longer, brutal races on long tracks, he doesn't want Forza 5 to place those restrictions on players any longer.

In career, there are now many event types to choose from that each give you sweet cars from the word go, but if you want to go slower or smaller, you can do so from there. You don't have to put up with plodding races around easier circuits before you get to the good stuff. It's all there for you to enjoy in any order you like.

The cars themselves aren't perfect any more. There are paint imperfections visible in Auto Vista mode – which now applies to every single vehicle in the game – and this desire to remove away from pristine, sterile and unrealistic levels of perfection in racing extends to tracks. The team laser-tracked the entirety of Belgium track Spa, so that every crack in the asphalt, every weed growing over the apex and every chipped wall around the track is as accurate as can be.

I wrote some hands-on impressions of Forza 5 here if you want to know more about how it controls, but from a visual perspective the game simply looks stunning at 60 FPS, with dynamic lighting and incredible cockpit view fidelity that should give rise to new levels of immersion. Add to this the game's Drivatar AI system – which does appear to shake up the way opponents race from what we've seen – and you're looking at a big, absorbing racing experience for fans of the genre.

Xbox One may have had a bumpy ride on the way to Cologne this week, but now that the console's policies are now set, Microsoft can focus on the games, and so far what I've seen is strong. The question is, can the software at hand convince naysayers to look past Microsoft's gaffes and consider buying the console at launch?

Tell us what you think below.