The tech sounds a little 'sci-fi' for Xbox 720, but the tech mentioned in Microsoft's patent filing is reportedly linked to Kinect 3D Glasses – codenamed Fortaleza - that we reported on back in June.

The tech is said to spread a 3D environment all over your room, that will presumably be made visible while wearing the alleged Kinect 3D glasses. Take this with a pinch of salt for now of course.

A description of the tech from Microsoft's patent reads, "Interactive media experiences, such as video games, are commonly delivered by a high quality, high resolution display. Such displays are typically the only source of visual content, so that the media experience is bounded by the bezel of the display."

"Even when focused on the display, the user may perceive architectural and decorative features of the room the display is in via the user's peripheral vision. Such features are typically out of context with respect to the displayed image, muting the entertainment potential of the media experience."

Patently Apple discovered the patent filing which says of the tech, "An immersive display environment is provided to a human user by projecting a peripheral image onto environmental surfaces around the user. The peripheral images serve as an extension to a primary image displayed on a primary display."

the site has also posted the below image: 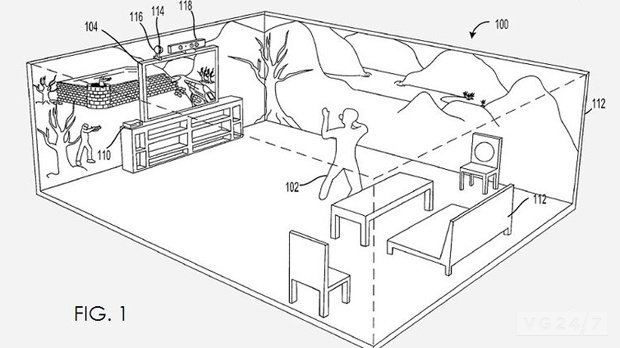 The user is playing an FPS game in this shot. Patently Apple suggests that the game environment is plastered over the player's room, and uses motion to move, aim and shoot. The player can ever turn around to catch people sneaking up on them before it's too late.

According to Patently Apple, Microsoft has stated in its patent documents that Xbox 720 can be hooked up to camera tech - which could be a new version of Kinect - which accurately captures depth. In fact, the patent reads, "gestures performed by the gamer while playing a video game may be recognized and interpreted as game controls. In other words, Microsoft's Kinect will allow the gamer to control the game without the use of conventional, hand-held game controllers."

Does this hint at a new version of Kinect for Xbox 720? We'll have more as it happens.

Thanks Patently Apple, and CVG.