Some individuals often question who exactly the WWE 2K franchise is aimed at. Either it’s too much of a simulation to win over the general fighting crowd, or there isn’t enough ‘hardcore’ content for lifelong fans. I cannot possibly believe anyone could come to such a conclusion after the latest in the series.

Deciding to offer as much as possible in a yearly release, WWE 2K19’s main goal seems to be leaving no stone unturned. If there’s something you deem necessary from a content standpoint, at the very least the team in charge has done their utmost to include it. Deep isn’t the word.

Be it modes, the always ridiculous creation suite, an ever growing roster or how much is possible when you’re in the ring, this is an absolute beast that keeps on giving long after you’ve assumed there’s nothing else to see. It’s a credit to the developers even though not everything hits.

Return Of The Beast

It’s not just new features that make up this wall of options either. In a very nice nod to its community, 2K has also brought back Showcase Mode, a ‘mode’ that ‘showcases’ a particular WWE Superstar. Naturally...

This year that honour has fallen to Daniel Bryan and it’s every bit of the journey you’d expect. Starting with his match against John Cena all the way back at a 2003 Velocity taping, Bryan is on hand to provide context for his rise and fall right up to the WrestleMania 30 main event. It’s helped no end thanks to how damned likeable the leader of the ‘Yes Movement’ is, and also does a solid job hitting those nostalgia glands for those who remember, and explaining the situation to those who don’t. Some of the lines have been blurred slightly from what was actually happening at the time, but a video game isn’t going to address that. For the crazy narrative that accompanied Bryan’s apex, jump online and have a read. It can act as a fascinating appendix.

If you choose to start at this juncture, too, you’ll also – of course – get your initial impressions in to how WWE 2K19 plays, and by and large it’s business as usual. Long-term players won’t be too surprised, but it is fair to say an abundance of tweaks have made it feel far better than 12 months ago. For starters moves have much more impact here – meaning you’ll react like an idiot when it looks like you’ve killed someone – and the animation has come on leaps and bounds.

The two combine pretty well to replicate the experience of a WWE match, even if personally I’m still waiting for the day when you’re asked to work with your opponent to simply entertain the crowd as opposed to actually trying to win. Which is what wrestling is... 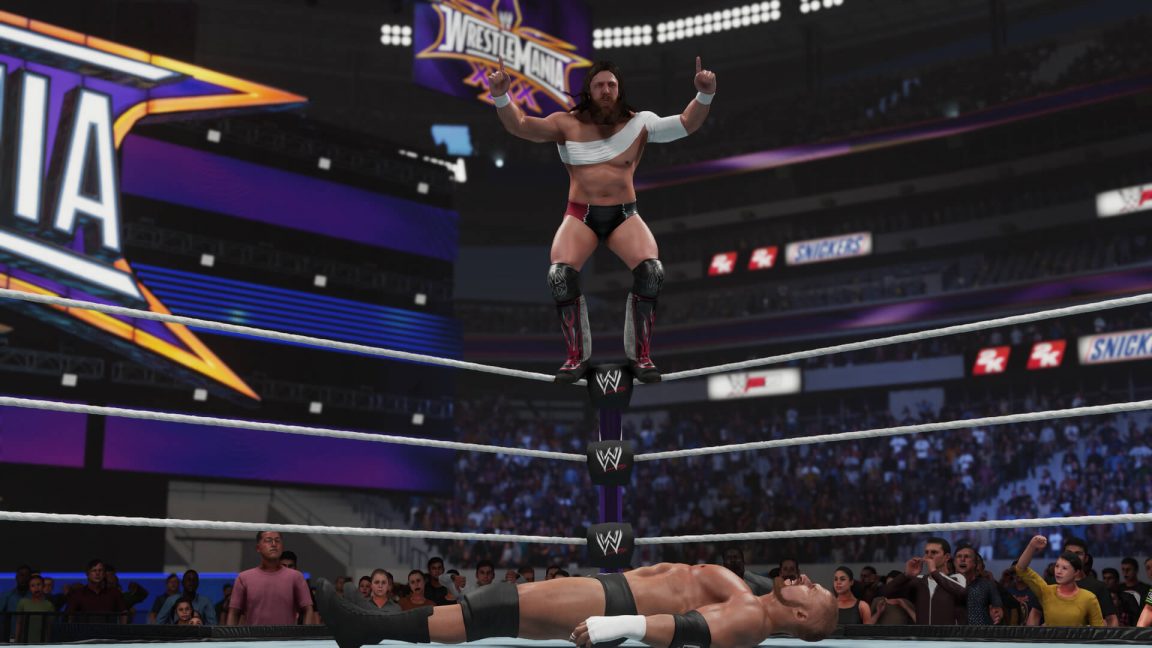 This idea expands further when it comes to chaining manoeuvres together. It’s far more free flowing than previously, and finding your rhythm is greeted with a wonderful sense of satisfaction. It may just be a video game, but your body is aware it just achieved, even if said achievement came from pushing a button at the appropriate time.

With that said, it’s important to note there’s still an awful lot of controls to learn, and that you absolutely have to be someone who considers ‘reversals’ fun. Much like the franchise in general, countering a foe’s attacks is imperative for any kind of success and it’s anything but easy. You can’t spam it like in past titles thanks to 2K limiting how many significant reversals are allowed, but they are still key and that can go one of two ways.

The first is they wind you up so much you hurl the controller into the TV like some giant child. I wouldn’t advise this, but it’s certainly possible. The second is the smarter option, and one I personally embraced. Give it some time, and you’ll soon find the sweet spot and matches will start to improve. It can be difficult to get there on occasion, but the reward you receive for arriving there is a pleasant one.

Naturally this is reserved for when you’re challenging the AI which is why getting a friend around to play with you is, has and always will be the best way to experience any WWE game. A lost art in 2018, there are few titles who do on-couch multiplayer as well as this, simply because it’s so over the top. Nailing a last-minute kick out after a buddy has hit you with four Tombstone Piledrivers will make any room erupt with glee, and it never gets old.

You can, of course, go online and once again the amount of options is rather joyful. From standard exhibitions to one-off events – such as Towers and MyPlayer PPVs – you won’t be at a loss when it comes to choice; the only question being how the servers hold up. As of writing these words it’s impossible to tell given 2K19 isn’t out in the wild yet, but it currently seems more than stable. This review will be updated once there’s a better idea of how it’s performing. 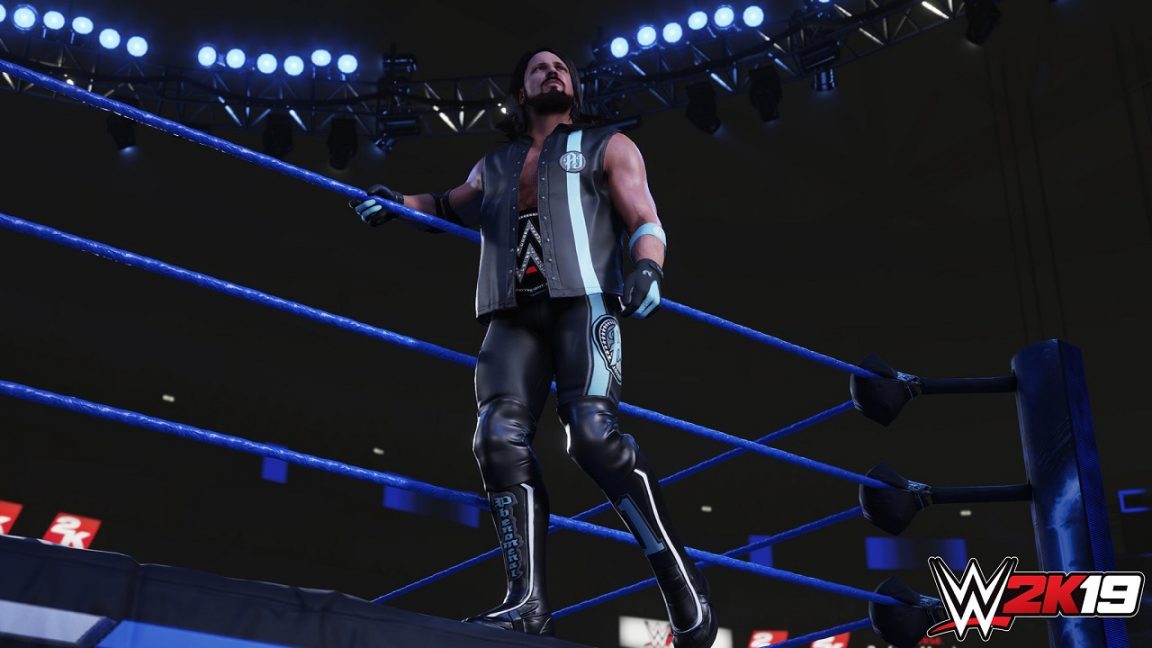 As there was mention of Towers and MyPlayer it’s also worth touching on these, starting with the former. Taking inspiration from Mortal Kombat, you can now take on increasingly more difficult gauntlets themed around a certain concept. There’s the UK scene, for example, that sees you begin your challenge against Jack Gallagher and end standing next to The British Bulldog. Each match has different stipulations and rules to keep you on your toes, and know this: you’ve got to finish each in one session and they’re freaking hard.

Seemingly introduced to serve as the game’s main test, you need to be at your best to conquer them before heading to social media to brag like an asshole. You can also create your own and share them with others in MyPlayer, which serves as a great segue to talk about just that.

Once again rammed with things to do, the spotlight is shined on MyCareer, a specific story mode which is more than a little influenced by FIFA’s The Journey. This isn’t a bad thing, mind. Allowing you to create a wrestler and take them from zero to hero, it’s a fully voiced tale filled with dialogue choices and unexpected twists.

It’s a little ludicrous – there’s a continuous struggle about whether to present wrestling as an actual sport or a form of entertainment – but it’s a nice distraction, especially as a bunch of WWE Superstars voice themselves. Braun Strowman will be telling you he wants you dead within the first hour, and who hasn’t wanted that in their life? 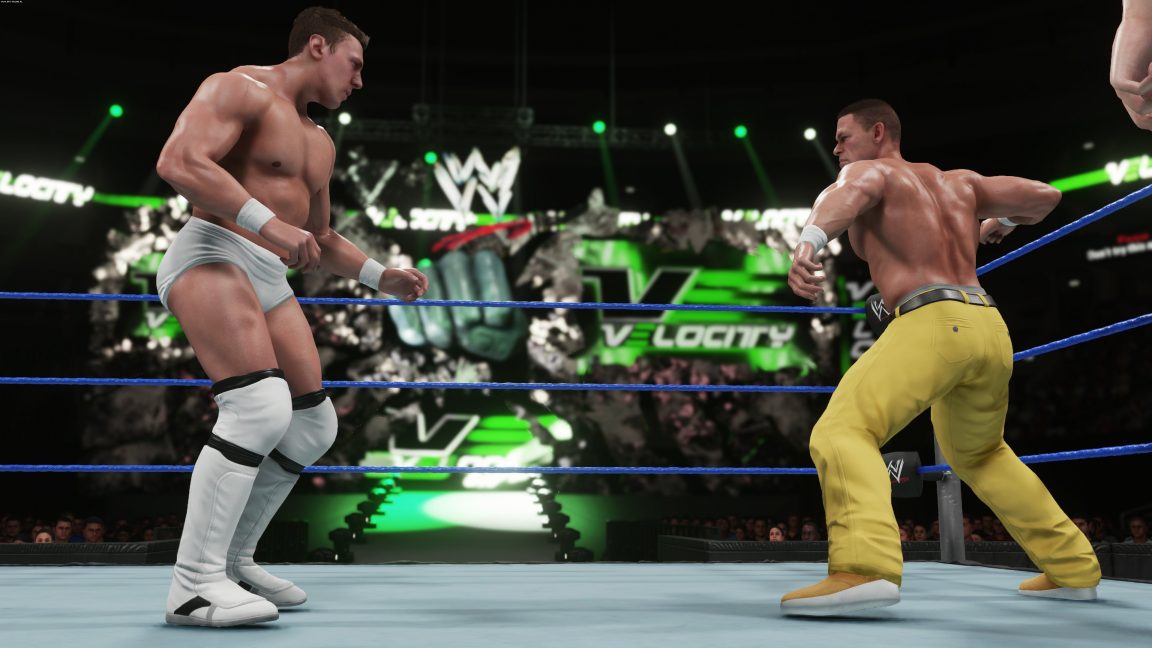 There’s so much to WWE 2K19 it’s almost impossible to mention it all, be that the new Payback mechanic which acts as in-match buffs, the vastness that is the creation suite, Universe mode which will delight those who are obsessed with it, a range of mods that make things even dumber (like big head mode), and all manner of smaller updates which come together to make this the best version for a while.

It’s not perfect by any means, and the commentary especially needs a complete overhaul. If Michael Cole references a suplex that never happened again I may start to doubt my own senses, and, yes, I’m sure some people will raise an eyebrow at the use of VC to unlock certain items. Full disclosure: I played this for well over 15 hours and never once had to use my own cash for anything and nor did I feel the need to.

All of that is small criticism, however, for something which goes out of its way to offer so much, and offer it in a way that’ll likely please a lot of people.