We’ve been spoiled for new World of Warcraft content over the past few months, as each of the new zones in the game’s latest expansion, Shadowlands, have been added one by one to the alpha, and on Wednesday WoW executive producer John Hight and game director Ion Hazzikostas hosted a presentation on Twitch and YouTube showing off some of the more intricate features of gameplay we can look forward to when the expansion launches sometime in the Autumn.

The main theme of World of Warcraft Shadowlands is apparently that of player agency, and the choice between which Covenant of the afterlife you’ll champion throughout your time in the afterlife. Thanks to Blizzard’s presentation we now know a lot more about how the Covenant system will work day-to-day.

The main feature discussed was the new Soulbind system, which we’ve been promised will help balance all those overpowered global and class-specific Covenant abilities we gain access to as we level through Bastion, Ardenweald, Maldraxxus and Revendreth, and ultimately have to choose between as we lock in our allegiance for the remainder of the expansion.

These look to be the final few features the developer is announcing before Shadowlands enters beta next week, and I managed to get hands-on in Blizzard’s event realm to get a feel for how they’re shaping up.

Only the Revendreth Sanctum of Sinfall was available for our perusal in the event realm, but as I loaded in, it was immediately clear a tonne of effort had gone into making the towering multi-tier home of the Venthyr feel like the gloomy hangout of vampires and gargoyles, complete with blood-tinted gates transporting us between floors, and decorative gravestones adorning the sprawling monument in the central hall.

Each of the zones in Shadowlands feels satisfyingly distinct, and it seems as though the art team have tried to double down on this for the Sanctums we’ll be making our homes for coming months. They feel much more akin to Legion Order Halls than Battle for Azeroth’s capitals of Boralus and Dazar’Alor, with the central city of Oribos filling the role of Dalaran. 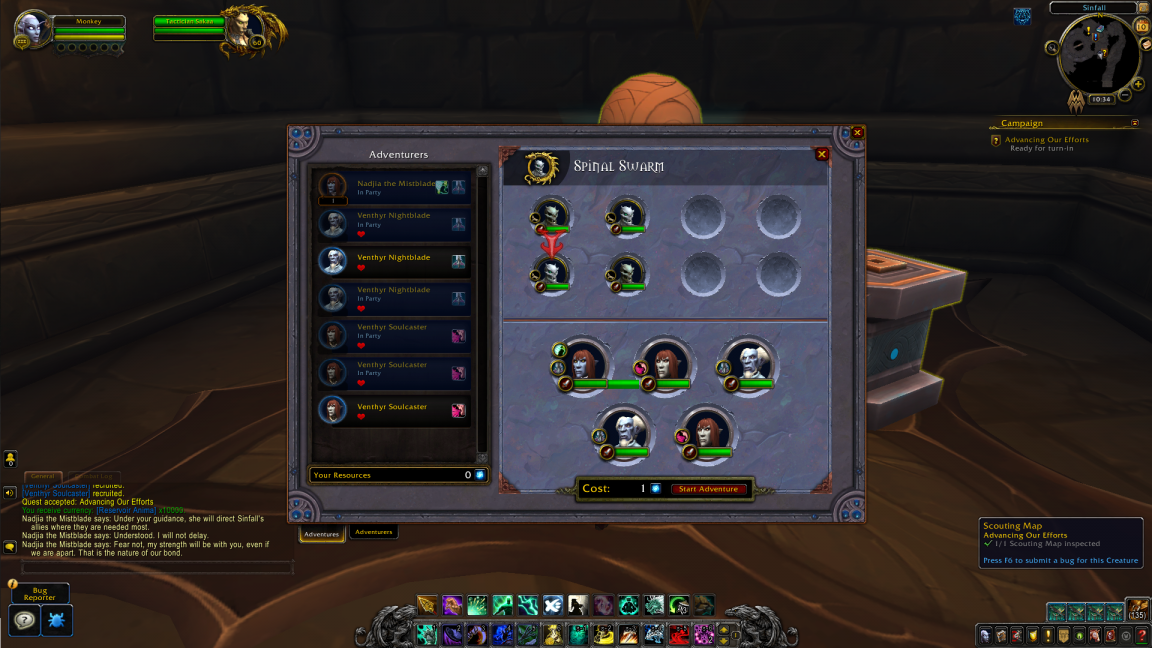 After a couple of introductory quests where I was infused with the crimson blood-tinged (spot the recurring theme) power of the Venthyr as I officially joined their ranks, I was introduced to the new Soulbind system. After a brief introduction with my soul partner - where she didn't even buy me dinner or anything - our souls were bound together, lending me some of her power, and I was able to check out the Soulbind interface and accompanying skill tree.

There’s been a lot of discussion over the power levels of the Covenant abilities you gain access to when you dedicate yourself to either the Venthyr, Night Fae, Necrolords or Kyrian, and one purpose of the Soulbind system is to balance out those abilities so you don't feel so bad for locking yourself out of the increased power or utility levels of other covenants.

With this in mind, the Soulbind tree at first glance looked a lot simpler than I was anticipating, with each of the three trees I had to choose from only having a few talents for me to pick up, across a couple of intersecting trees. The complexity of the system apparently comes from the empty ‘conduit’ slots in the Soulbind trees, which promise much further customisability for players later down the line. I already had access to a few from a specially placed vendor, and sure enough there were some interesting interactions with my spec-specific abilities that do have some potential. 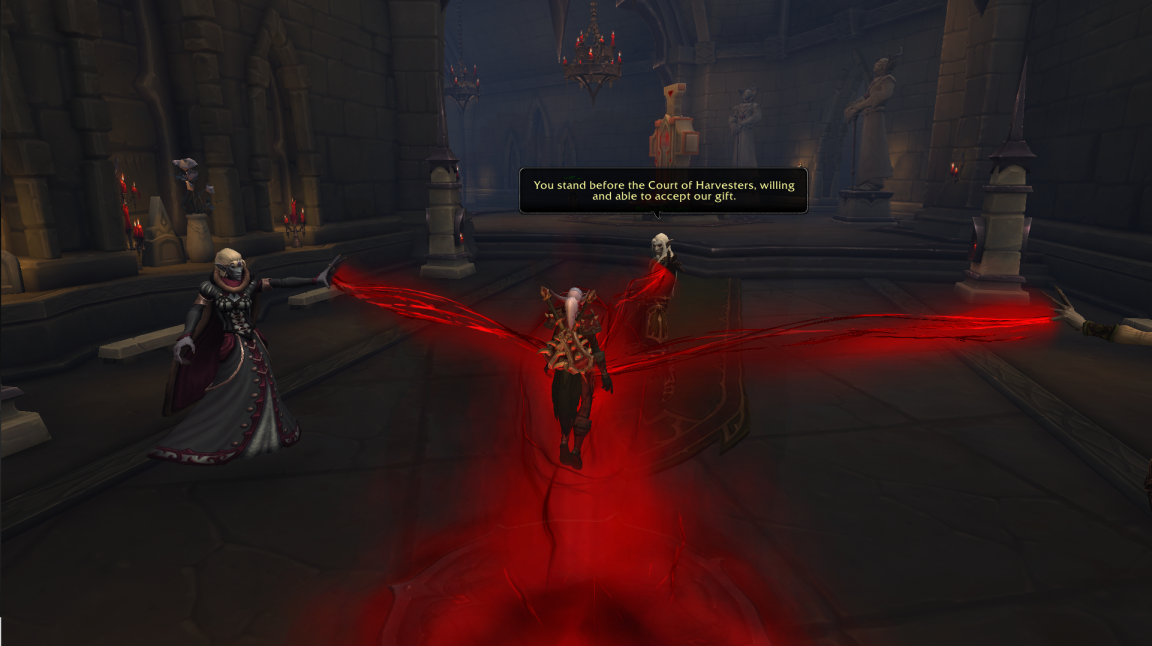 The non-conduit abilities seemed to either tweak my Venthyr-specific teleport ability - making it instant or turning it into an AOE disorient, for example - or provided flat or procced percentage boosts to skills. I picked up one that occasionally meant two of the Igor-like minions from Revendreth turned up with an umbrella to shield me from the sun, which apparently increased my Mastery for a while for some reason. It was pretty funny at first but felt a bit out of place later when I was surrounded by flaming death monsters in the Maw.

We’ll level up our Covenants through the Renown system, which will take the place of our weekly Azerite toil, though Blizzard have made repeated claims that this will be a renewed system without the need for constant grinding. This Renown currency accompanies the Anima Power we collect throughout the expansion, and the Lost Souls we gather from adventuring in the Maw - of which there are three sub-varieties.

All three currencies play a role in Covenant progression, being needed to build Sanctum upgrades for example, but I can’t help but fear Shadowlands will fall into the same trap as Battle for Azeroth here, which had far too many currency varieties to collect and was only worsened in later patches where some fell almost completely into obsolescence. At one point I had so many War Resources the number didn't fit in the text box on my screen. 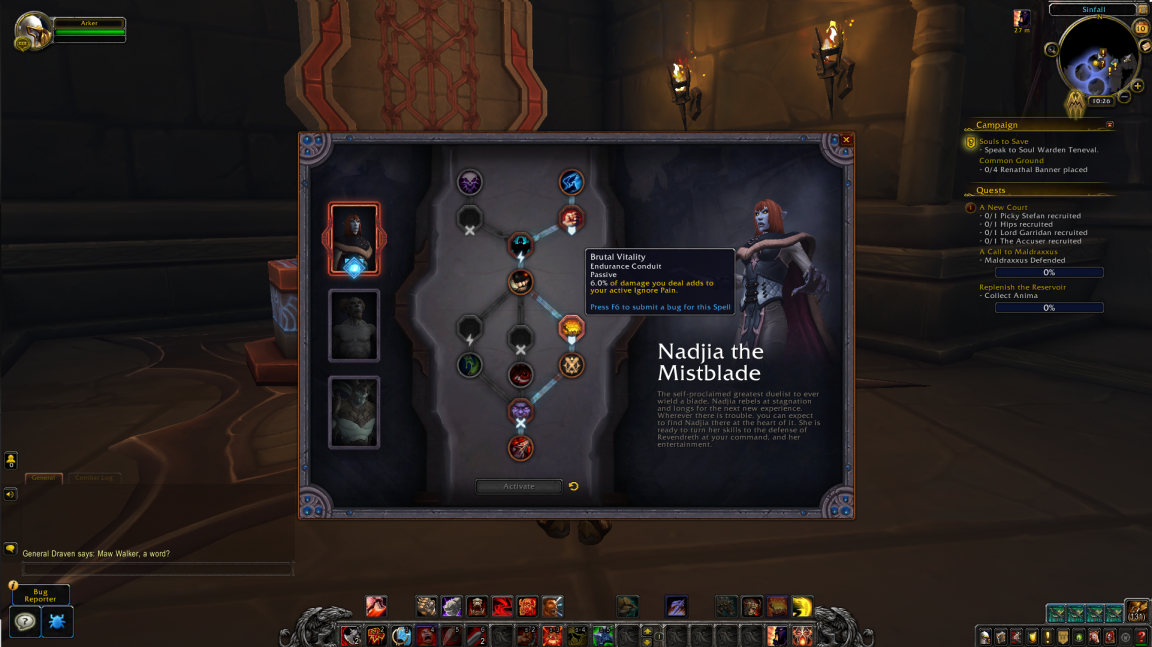 But speaking of those Sanctum upgrades, it was also announced that each Covenant will have a unique activity specific to their lore and fantasy. We’ve been told it’s merely a side-activity for additional flavour with no powerful rewards, but they could play a role in swaying a more roleplay-oriented player in which Covenant to choose. The Kyrian’s have a kind of boss rush mode as you take on the role of one of your Soulbound heroes, the Necrolords craft nightmarish creations in the Abomination Factory, the Night Fae get a replacement to the farm from Mists of Pandaria in the Queen’s Conservatory, and the Venthyr can schmooze with high society in the Ember Court.

I managed to take a quick look at the Ember Court, and I have to say it fell a little short of my expectations. Helping a small gargoyle in a party hat throw galas by appeasing guests with tea and cleaning up rubble on the floor didn't really fit in with the rest of the zone’s aesthetic. It was a fun little mini-game, I guess, choosing which guests to appease with various activities, but you feel more like a member of the help than an adventuring hero who recently helped save the world for the umpteenth time. It definitely feels a bit more Edward Cullen than Nosferatu on the scale of vampire coolness.

Also to be found in the Sanctum was Shadowlands’s replacement to the dreaded Mission Table. The system felt fairly pointless in Battle for Azeroth, so I was curious to see how they’d redesigned the table through the Adventures system.

The devs claim to have taken some inspiration from autobattlers like Dota 2’s autochess and Blizzard’s own Hearthstone Battlegrounds, but this is a far simpler system than all that. It looks a little more complex than the mission tables of the past, with you slotting in tanks, healers and damage heroes to counter a grid of enemies, and you still have to wait around for up to a few hours to finish up your adventure, but when you come back you get to see how the fight all played out

I’m not sold that the new system will revolutionise the feature and get every player engaging with the mission table, but it certainly feels more stylised and slightly less passive than before. The white battle text on the side of the screen, similar to the damage detail tab of your chatbox, is a nice touch. I only got to play around with a couple of intro missions, and we’ll have access to more heroes once we level up our covenants, so how tactical this system truly is remains to be seen.

It's great to see Blizzard putting so much effort into making each Covenant feel like their own unique beast. But the developers need to be careful not to only focus on style over substance. All that agency could backfire horribly if one Covenant is perceived to be getting more attention than another, and as of right now it’s clear a lot more tweaking needs to be done to both the Soulbind system as well as Covenant abilities. Personally I don’t mind being a percent or two less powerful if I get to look at Ardenweald all day as part of the Night Fae, which probably says more about me that I’d like, but for a lot of players those damage numbers are all that matters. How Blizzard manages these expectations could make or break the whole expansion.