This Final Fantasy spin-off has its problems, but its charm will win most over. 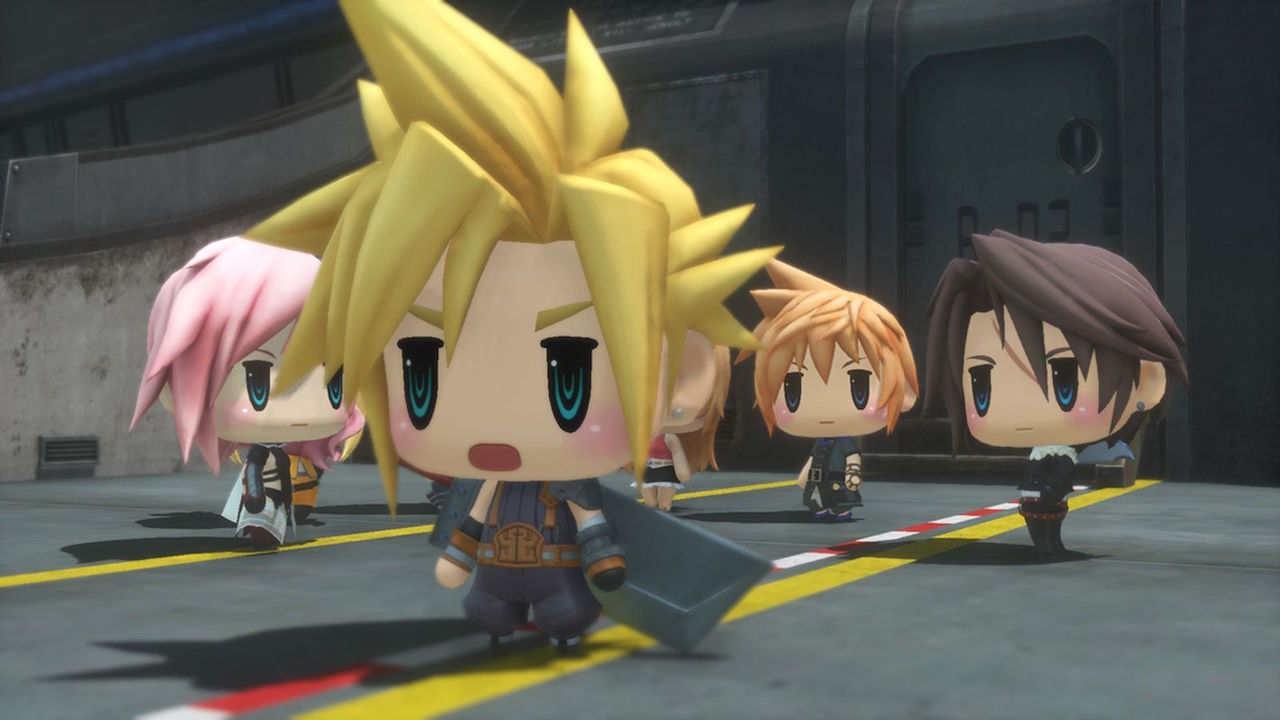 FF has a rich history, and it'd have to be a pretty good bit of content to be a proper celebratory game for the series. While I like fighting series Dissidia Final Fantasy (also initially conceived for an anniversary) I always felt like it lacked a lot of the energy of the actual FF series. Dissidia is a chance to see characters from the games interact and fight above all else - it's jam-packed with fan-service, but you can't really say it's an FF in the truest sense.

"That's the beauty of World of FF - the fan-service is added as a bonus rather than used as the foundation for the very game."

World of Final Fantasy is the opposite. It's an original story starring a pair of original characters, but the world it takes place within is packed with references to FF at large. The first major location the game deposits you into after its opening is a recreation of the kingdom Cornelia (Corneria in the original translation) from the first FF. The music is the same. Princess Sarah is there. Soon enough, the Warrior of Light, the original FF's nameless lead, shows up. 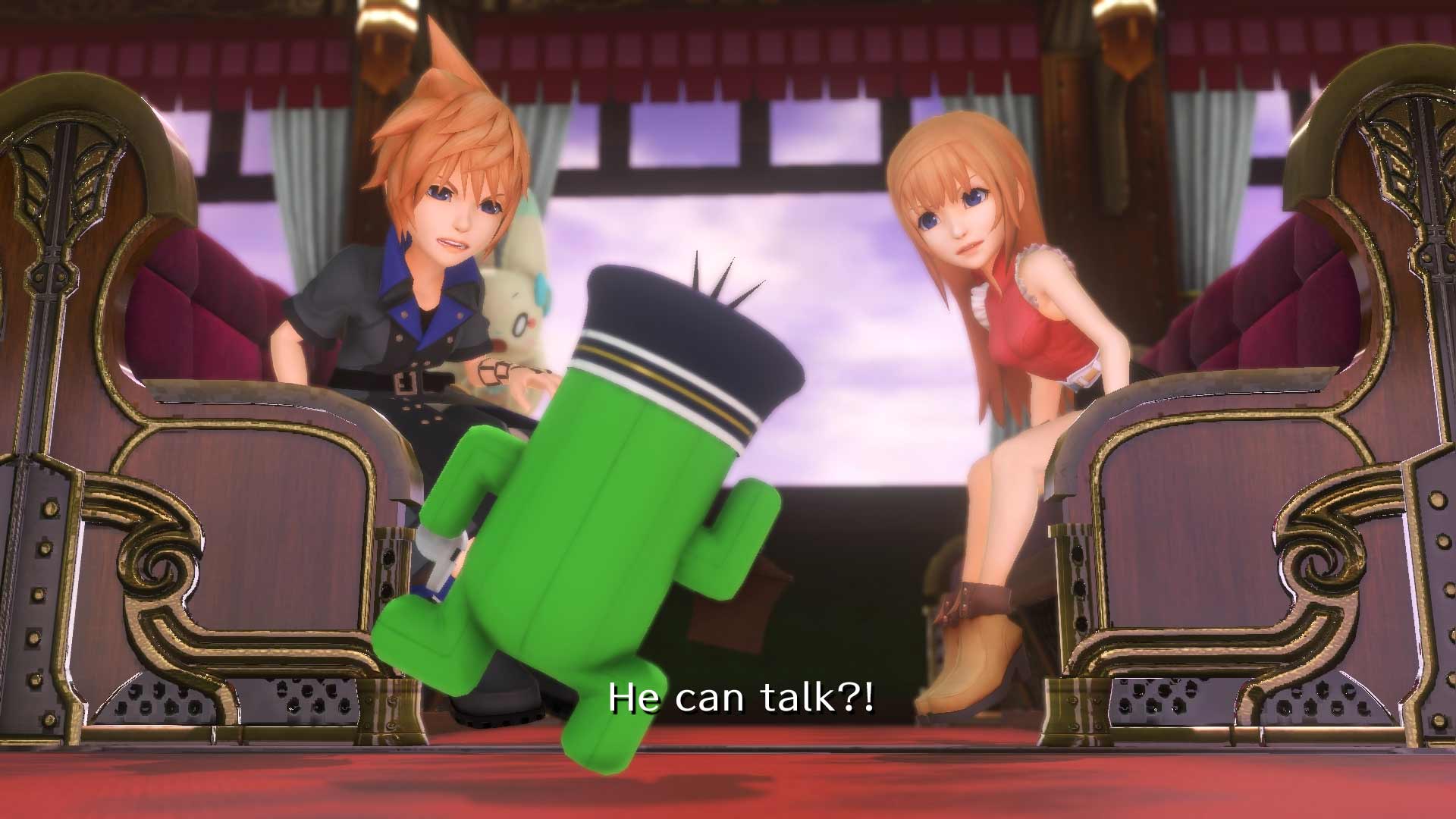 The game itself is some typical Japaense RPG stuff. It follows amnesiac (of course) twins Lann and Reynn, and you can switch between either of the pair on the fly. Soon enough the pair learn they have supernatural abilities that basically make them FF-themed Pokemon trainers and in turn destined to save the world.

There's traditional turn-based JRPG battling from here with the pair imprisming (catching) mirages (Pokemon) and then leveling them and using them to fight. Some can be transfigured (evolved) into different forms with different skill-sets. The creatures are of course direct representations of or derived from classic FF monsters and allies.

On top of simply catching and leveling them, each creature comes with its own Mirage Board - a skill tree that resembles FF10's sphere grid. It's good stuff.

There's a twist, of course: rather than using the creatures to fight, the pair actually stack creatures on top of their heads to make themselves more powerful. The aim is to build a solid, powerful stack of three. The protagonist duo can either be a chibi size or full-size human sized, and thus can appear at different heights within the stack alongside creatures. Taller stacks are more powerful, combining the abilities of multiple Mirages. 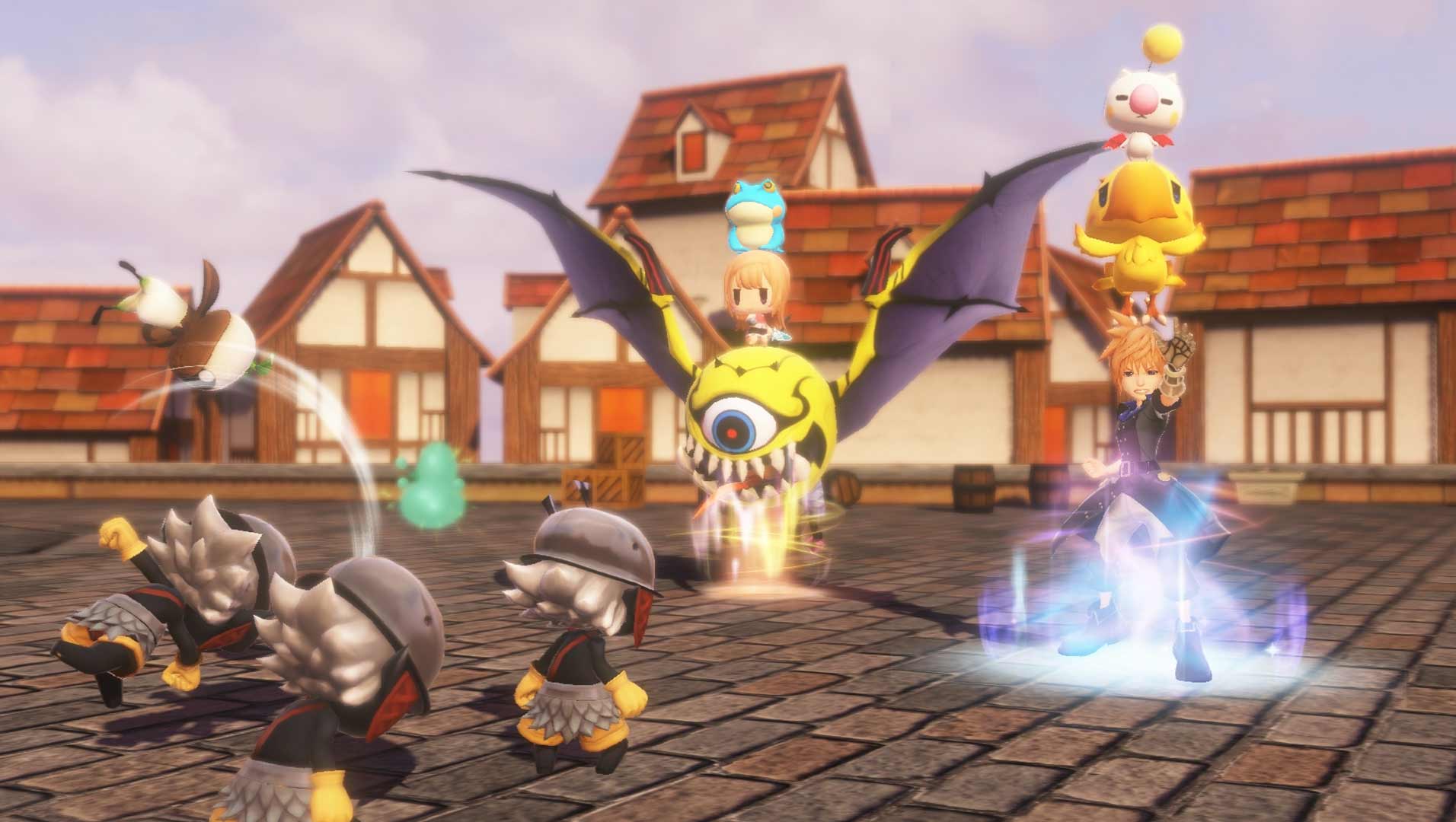 "The combat keeps things simple at a base level but there’s a level of depth to unfurl that FF has actually tended to shy away from in recent years."

There's a strategy to stacking the right creatures or unstacking at strategic times, while also having your stack toppled over by forceful attacks is also a constant threat. Suddenly this cutesy game takes on a more complex and mechanically nuanced guise, something that's very welcome indeed.

The battles are properly traditional turn-based stuff. The game uses the Active Time Battle system popularized and used between FF4 and FF9. The game keeps things simple; characters don't dash across the battlefield to land a hit but simply swing their swords at mid-air, SNES-style. One gets the impression all this worked for the game on multiple levels: It was cheaper, it allowed for a Vita version, but also it evokes the classic FF series in this, a celebratory game.

I really like the combat in this game. It keeps things simple at a base level but there's a level of depth to unfurl that FF has actually tended to shy away from in recent years. In this sense WOFF is also a smart counterpoint to Final Fantasy 15 - while the big, new and expensive FF is switching gears to be more like an action game, this is a staunchly traditional Japanese RPG.

Sometimes this made me laugh at its design. Relatively early on there's a good old fashioned sliding ice puzzle in a dungeon. Of course there is! Later dungeons especially are full of puzzles to complete and secrets to scratch out. They're rarely original, but that's fine. It's also sort of the point; many have been hankering for a traditional game of this type for a while, and WOFF is arguably more successful at this than I Am Setsuna, another Square Enix effort to recapture past glories.

There's so much to love, yet parts of WOFF feel a contradiction. Director Hiroki Chiba says that the game is designed with new fans in mind. It even comes with an extra simplified control option for those not comfortable with FF's classic menus... But at the same time WOFF seems to take most of its joy in fanservice and cameos that will be entirely lost on those people. That's even more a shame thanks to how each fan nod is executed with a relish only a developer that's also a fanboy could manage. 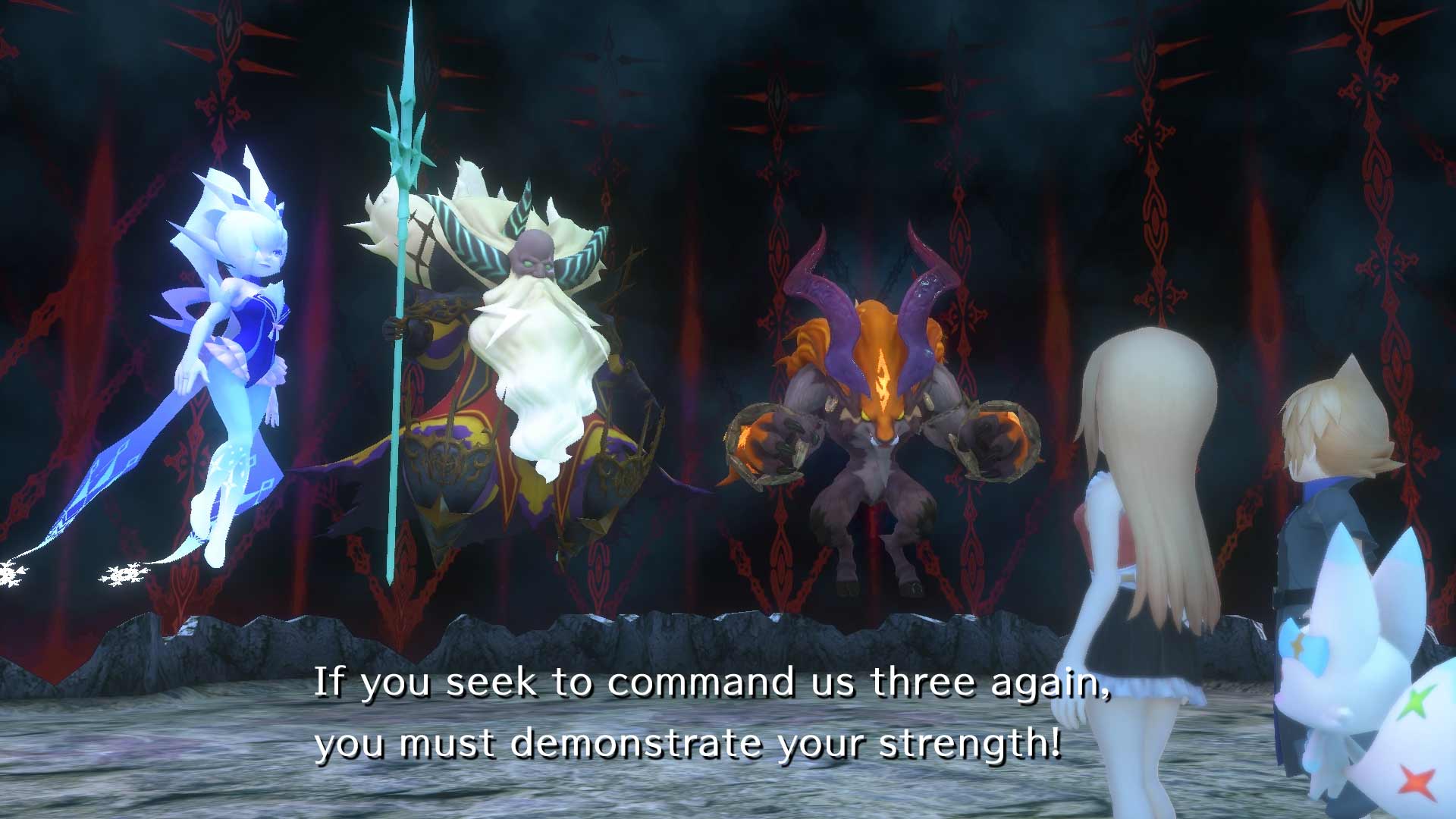 Early on, the game has the plodding pacing and hand-holding of a game worried it'll confuse its audience, but it also packs in a fast-forward functionality so you can watch scenes more quickly without outright skipping them. The same is true of the battle speed even on the maximum setting. None of this is an absolute deal-breaker, but one can practically see the to-and-fro of the no doubt impassioned debates on both sides of its development.

This is ultimately what WOFF is. It has the mechanical depth to please an old-school Japanese RPG nerd like myself but then in search of that elusive new generation of fans goes out of its way to ensure there's no reason to truly dig into that depth - the game is too easy. Classic FF heroes can later be earned as super-powerful summonable helpers in battle, but there's little reason to call in Terra to smash an enemy with her Magitek Laser - the fights are easy enough as it is.

"In a sense, FF has become a typically JRPG-like amnesiac protagonist in its own story. It casts about in a search for its true identity, like Cloud in the Lifestream. Where does it belong? What is its place in the gaming world?"

Thanks to these contradictions World of Final Fantasy is perhaps a stronger 30th anniversary game that even Square Enix might have intended. It perfectly encapsulates much of the series: the wonder of the early days, the confident stride of the 16-bit outings and the strength of design that truly put the series on the map from the PS1 on. On top of these, however, it comes wrapped in the last ten years of Final Fantasy: trapped between a desire to please a discerning, challenging and aging fanbase and the absolute need to bring newcomers into the fold.

In a sense, FF has become a typically JRPG-like amnesiac protagonist in its own story. It casts about in a search for its true identity, like Cloud in the Lifestream. Where does it belong? What is its place in the gaming world? World of FF's design seems to underline that struggle, and it feels appropriate that it arrives right as FF15 takes a shot at redefining the series.

There's still a lot to love in World of Final Fantasy, and it's a game I really enjoyed my time with. I'll probably even give it a replay in its Vita iteration the next time I have a trip somewhere.

Its script is charming (if testing in places), its fanservice well-pitched and its mechanics enjoyable. It won me over in spite of my complaints. It feels like a proper, classic FF with all the whimsical appeal you'd expect - and that's something I've wanted for a while. It's interesting just how representative its smaller problems are of FF's challenges as a whole, though.

World of Final Fantasy is out now for the PS4 and PS Vita.