Although Netflix has kept details about The Witcher season 2 relatively under wraps, a new report suggests that filming is well underway - and Geralt has been joined by four other witchers.

Filming for The Witcher season 2 actually kicked off in February, but the new information about Geralt's witchery companions only surfaced online today. The report features an image from Rasmussen's Instagram story, which can be seen below. 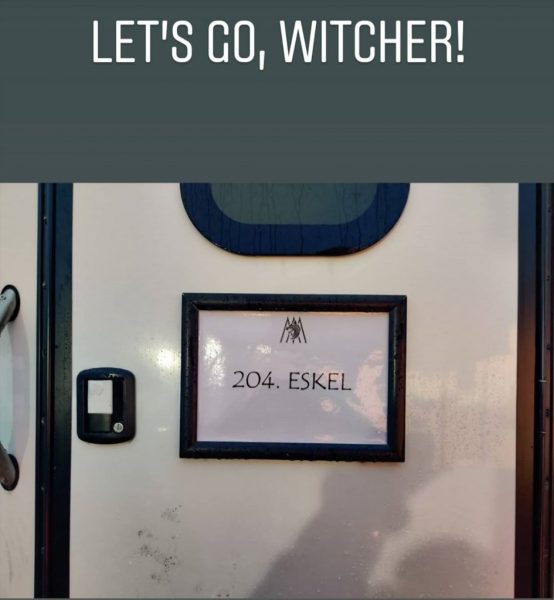 This trailer pretty much concludes that Rasmussen is on set and actively filming his scenes for season 2. It's also worth noting that Rasmussen recently posted that he was working with Barry Gower (the prosthetic artist who brought you Game of Thrones' White Walkers) on Instagram. You can see that post below, too.

"I hope they make me real pretty," Rasmussen said. However, it's unclear what exactly The Witcher would need Gower's expertise for when it comes to Eskel. He has plenty of scars, but so does Geralt - does this imply we could see a scene in which Eskel gets himself into major trouble? Possibly - all we know for sure is that as much as Geralt was beaten up in season 1, he never quite needed a prosthetic artist like Gower, so something is definitely up.

Meanwhile, Paul Bullion is playing Lambert, who some fans might remember from Geralt's Witcher 3 limerick, "Lambert, Lambert, what a prick." You can check out a video of him practicing with a sword below.

Coën, who is being portrayed by Yasen Atour, is a witcher that video game fans might be less familiar with. He's not actually from the Wolf School, but he hangs out at Kaer Morhen with Vesemir and the others. He forms a particularly strong connection with Ciri, so you'll likely see them spending a lot of time together in The Witcher season 2 - which, by the sound of things, will be adapting Blood of Elves, the first novel in the saga (season 1 adapted The Last Wish and most of Sword of Destiny, which are short story collections).

Last of all, although fans were almost certain Mark Hamill was a shoe-in for Vesemir, it was recently announced that The Bridge's Kim Bodnia would be portraying everyone's favourite witchery softie (a wonderful casting, once you put two and two together). He confirmed his involvement with the project just less than a week ago on Twitter.

I am very excited for this one

Although this confirms that there are now at least five witchers filming on set, there's still no concrete release date for The Witcher season 2. The best we have comes from a Reddit AMA showrunner Lauren S. Hissrich participated in last month, during which she said:

"We don't yet have a target launch date for S2, past 2021. We don't want to rush the product. That doesn't benefit anyone."

If you're planning on jumping back into The Witcher 3 while you wait, check out our list of the best Witcher 3 mods.