As part of the DedSec resistance movement, it's your job to start an uprising in Watch Dogs: Legion.

Turning a Borough from Oppressed to Defiant is no easy task, but you'll be well rewarded for doing so. As a dedicated member of DedSec, you'll be able to turn the tide against London's various enemies by completing a range of activities that will turn each Borough's residents Defiant, making recruitment that much easier.

To get started, open up your map and choose a Borough. From there, you'll need to complete a series of objectives to unlock the final Borough Uprising mission. You can read our review of Watch Dogs: Legion here.

Once you've chosen a Borough and have zoomed in, you'll see a bunch of red icons all over the area. You'll also see whether the area is Defiant or Oppressed, what tasks you need to complete to make the area Defiant and what mission and rewards the area will unlock.

Simply put, you need to fill a progress bar by completing these objectives. There's a range of activities you could be asked to complete, most of which aren't very time consuming, so here's a look at what you'll be doing:

To take a photo of evidence, you'll need to get your phone out. Press up on the d-pad or equivalent for your platform and choose Camera. From there, point it at the red camera icon - i.e. what you need to take a photo of - and that's you. You'll know you're on the right track when it says "Target in view". 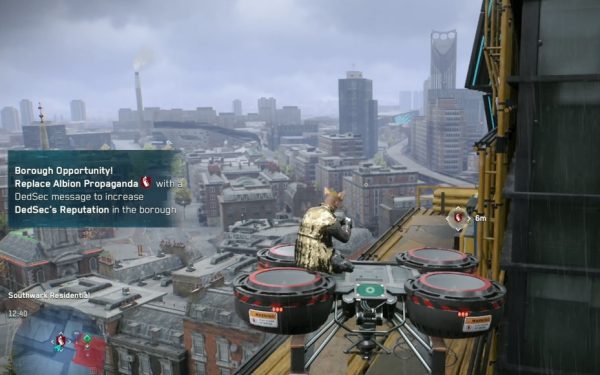 Once the bar is filled and the area is Defiant, you'll unlock a special Borough Uprising mission. These missions are among the most challenging in the game, but you'll unlock a unique recruit for DedSec such as the Hitman, a Spy and a TIDIS Beekeeper, each with their own powerful skills and gadgets. Unleashing a bee swarm upon Albion enemies is way more fun than arming a trap and electrocuting them, wouldn't you say?

Afterwards, folk in the area will be easier to recruit and you can continue on your mission to recruit London's finest.

If you're just getting started with Watch Dogs: Legion, you can check out our Operative Recruitment guide here, as well as our guides on how to unlock Stormzy’s Fall on My Enemies mission, where to find Tech Points, where to find your pre-order bonuses and how to fast travel around London.