Everyone in Watch Dogs: Legion is a potential ally, but how do you go about recruiting folk to DedSec and, more importantly, who makes the cut?

The first choice you’ll make in Watch Dogs: Legion is who you want your very first recruit to be. After the bombings by the mysterious Zero-Day and its allies, Sabine will attempt to rebuild DedSec and you get to choose who you want to play as.

While it’s tempting to recruit absolutely everyone you pass by, there are limits on how many people you can have on your recruit list at any given time. You’ll also need to consider each potential recruit’s skills and perks, weighing up a person’s exceptionally fast hacking abilities compared to their tendency to get the hiccups, as well as what gadgets or unique items they might have. 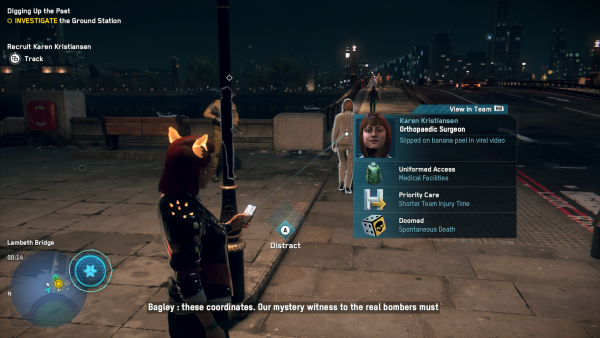 In this guide, we’ll take a look at how you go about recruiting folk, what skills and gadgets to look for and how to recruit folk who aren’t a fan of DedSec, like Albion employees.

When choosing your first DedSec recruit after the opening mission, you’ll want to consider what skills and perks they have. At this stage, all of the recruits are fairly balanced and will appeal to different playstyles, such as having fast download and hacking times or a unique vehicle, gadget or weapon.

All recruits display their employee status, some of which can provide Uniformed Access perks like Construction Workers or Doctors. Doctors can also come with faster healing times, so if you choose to play without Permadeath, your injured recruits will be available from the roster a little faster. 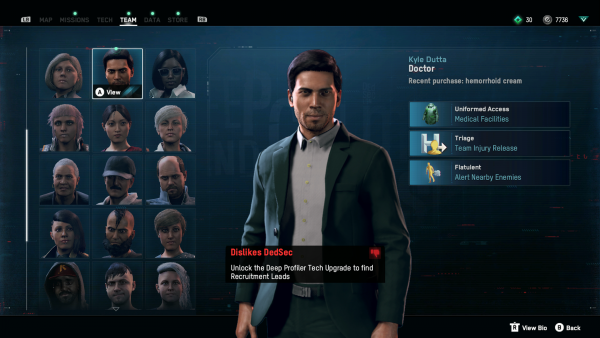 Choosing recruits who have their own Drones or Spiderbots is also really useful, as you’ll be using these gadgets more as the story progresses. It also means that if your recruit finds a Spiderbot deployment station in a mission, they can use it and their own Spiderbot so you can cover twice the area.

There are also negative perks to watch out for, such as Doomed and Flatulent. The Doomed trait means they could die spontaneously at any given point, even if Permadeath is deactivated. With the likes of Flatulent or Hiccups, recruits are more likely to reveal their position because they can’t hold their nerve in stealth situations, so maybe avoid those types if you want to sneak around.

For the majority of the game, you’ll want someone who’s a fast hacker and has remote download abilities to access things like keys and terminals. Other perks that work well are fast takedown abilities, access to unique weapons and better stealth, as they’ll help you get around easier and deal with armed conflict when you need to.

Now that you know what you’re looking for, let’s take a look at how to get people on side. 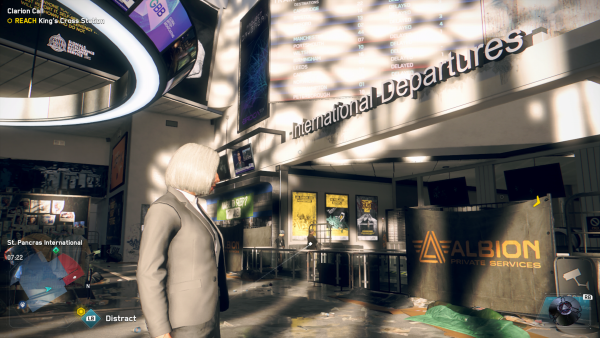 You can roam the streets and pick folk at random if you wish, but it’s worth exploring each Borough to find specific kinds of recruits.

Camden typically has more Hackers milling around, whereas Hyde Park is home to more Beekeepers. The City of London has more crypto specialists and CEOs that will come with ETO perks to help DedSec make more money or reduce arrest times and if you head towards the SIRS building, you’re likely to encounter some spy operatives.

Bagley will also let you know when he’s identified skilled recruits, which are usually worth pursuing. 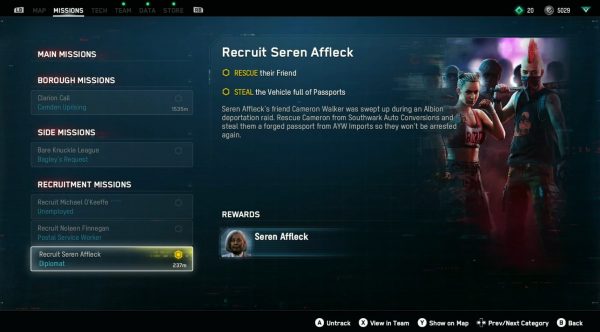 To recruit an individual, point your reticle at them and hold in your hack button to highlight them. You’ll get a brief summary of their job and skills, then you can press RB/ R1/E to add them as a potential recruit.

Afterwards, head into your Missions tab and look at your recruitment mission list. You can select their mission, which usually involves speaking to them and sorting out a problem. Most people want you to either rescue one of their friends or help their friend avoid being extorted by Clan Kelley, so off you pop on a short mission to recruit them to your cause.

If an individual has one red thumb down next to their name, it means they dislike DedSec. If there are two red thumbs down, it means they hate DedSec, so you’re better looking for recruits elsewhere.

Eventually, you’ll get a prompt when scanning folk that says your team is full, so you’ll need to decide which potential recruits don’t make the cut. To remove a potential recruit, select them then press the prompt for your platform to Abandon Recruitment. 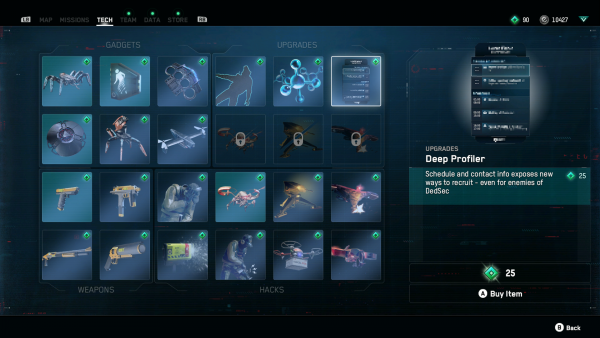 Before you can recruit an individual who dislikes DedSec, you’ll need to unlock the Deep Profiler Tech, which adds an extra step on to your mission. Once you’ve done that, you can recruit even more people to the cause.

It would be a good idea early on to try and recruit an Albion employee to make the most of their Uniformed Access perk. They also come with better weapons, if going in all guns blazing is more your thing.

Once you’ve unlocked the Deep Profiler Tech, approach an Albion employee and add them to your recruitment list. Then, head down to the Mission tab and select the Deep Profiler option. You’ll then need to visit them at a specific time to have a chat and unlock their recruitment mission, which is typically a bit more challenging than what you’ve done before.

Complete their mission and you’ll have a valuable asset onside to infiltrate the enemy.

After a Borough becomes Defiant and you complete the Uprising mission, you’ll unlock a unique recruit from each area. These recruits typically come with superior skills and gadgets, though the missions associated with them tend to be quite difficult.

You can recruit the likes of a TIDIS Beekeeper, a Professional Hitman and a Spy this way, which makes things more exciting in the endgame.

If you’re bored with your current Operative, you can head to the Team tab and swap out to someone else. It’s better to do this outside of a mission as you’ll be treated to a loading screen while they swap out, though you’ll sometimes have to swap mid-mission if your operative becomes critically injured. 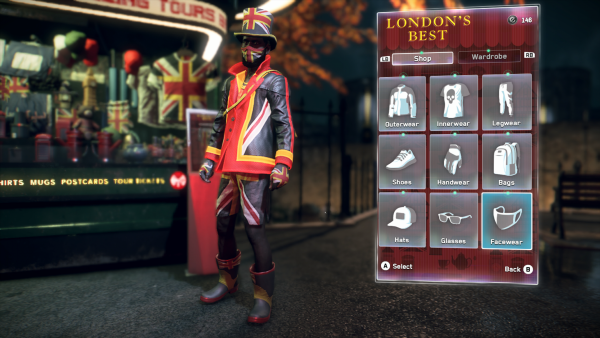 You can change a recruit’s loadout at any time as long as you’re not in a restricted area or under pursuit. You can change their weapon and gadget by heading into the Team tab and selecting Edit.

To change their clothes, head to the wardrobe in the Safehouse or to any of the clothes shops on the map. You’ll have a limited range of gear in your Wardrobe and as long as you have enough ETO, you can buy near stuff for your Operatives. Operatives can wear any item of clothing, jewellery, shoes or mask in your Wardrobe or from any store, so have fun with it.

Of course, you could buy all Union Jack stuff from the tourist stalls, like Captain London here, or spend your time creating a more professional looking outfit.

If you're just getting started with Watch Dogs: Legion, you can check out where to find Tech Points here, as well as our guides on how to make a Borough Defiant, where to find your pre-order bonuses, how to unlock Stormzy’s Fall on My Enemies mission and how to fast travel around London.