Watch Dogs Legion feels like the culmination of ideas that have been percolating for more than a decade. One of those games you get at the end of a console generation which waves a teary goodbye to the trends and ambitions of the previous cycle, before inevitably picking out a new toy to play with.

Big-budget games have long been obsessed with the idea of a ‘living, breathing world’, and I remember at the start of the PS3/360 era when one of the big selling points for The Elder Scrolls 4: Oblivion was NPCs wandering about on a timed schedule.

It was mind-blowing as a kid, but all it really amounted to was a lot of wood elves with hair like Alice Cooper’s backing band eating apples in a chair, while the same three voice actors had small talk with themselves. 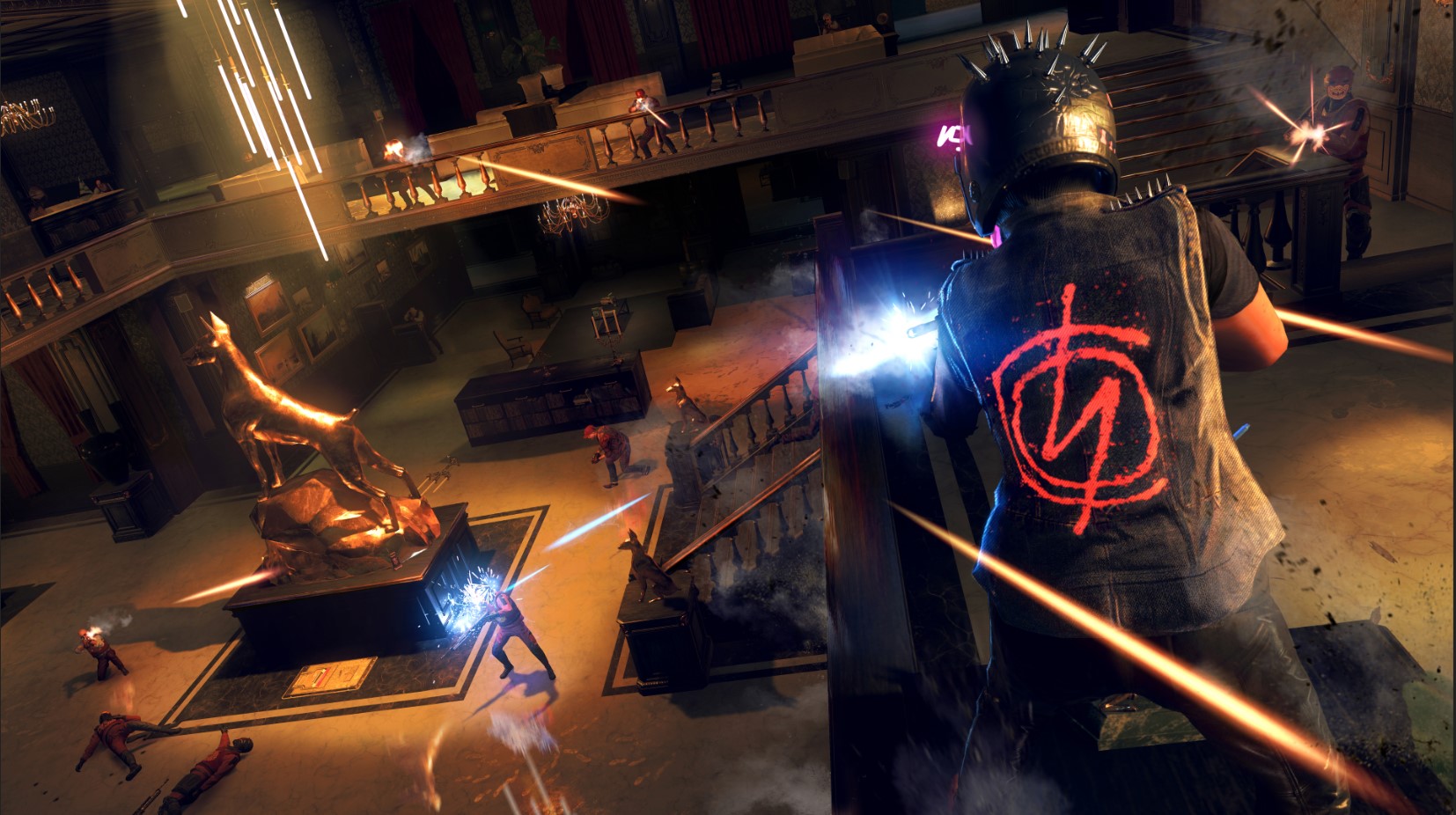 Rather than drill down into refining these systems, it feels like open-world games in the current generation largely opted for vast scale - plonking the same rigid robots in an ever-increasingly huge continent for players to explore.

But in Watch Dogs Legion, because you can pluck nearly any rando off the street and bed them into your hacktivist collective, it turns the background churn from a static diorama into a compelling platform for roleplay.

Letting you extend the fantasy and continue the lives of these background characters yourself takes away some of the abstract thinking required to make these kinds of systems impressive.

It’s difficult to appreciate things you don’t see, and being told “hey, that guy walking past you goes to the chippy at 6pm of a Friday” doesn’t add a lot to the experience if you’re speeding past him in a sports car after escaping a messy firefight, never to be seen again. But the ability to inhabit these characters after interacting with their routine adds a huge sense of scale to Watch Dogs’ dystopian vision of London.

While the basic idea is still the same as NPCs swapping pleasantries as they pass each other in the street, Watch Dogs’ passers-by all have the potential for free will, original thought, and self-determination, because they could all be you. It’s this feeling of possibility that’s so powerful.

That doesn’t mean the application is perfect however. In another interesting step, all of your recruits are voiced and can complete main missions - effectively meaning you can make anybody you like the main character of Legion’s story for a time.

I worry that without a central and developing character to hang events on, you’ll lose some of the impetus to keep going with what is ultimately a narrative based game, and it will be interesting to see how much of the heavy lifting your imagination has to do to see your present character at the centre of the resistance.

On top of that, there are so many permutations that some of the designed story content layered over the top can seem incongruous when you’re enlisting recruits.

During my demo with Legion, my objective switched to stealing some important data from a spider surveillance drone locked up in a police station. 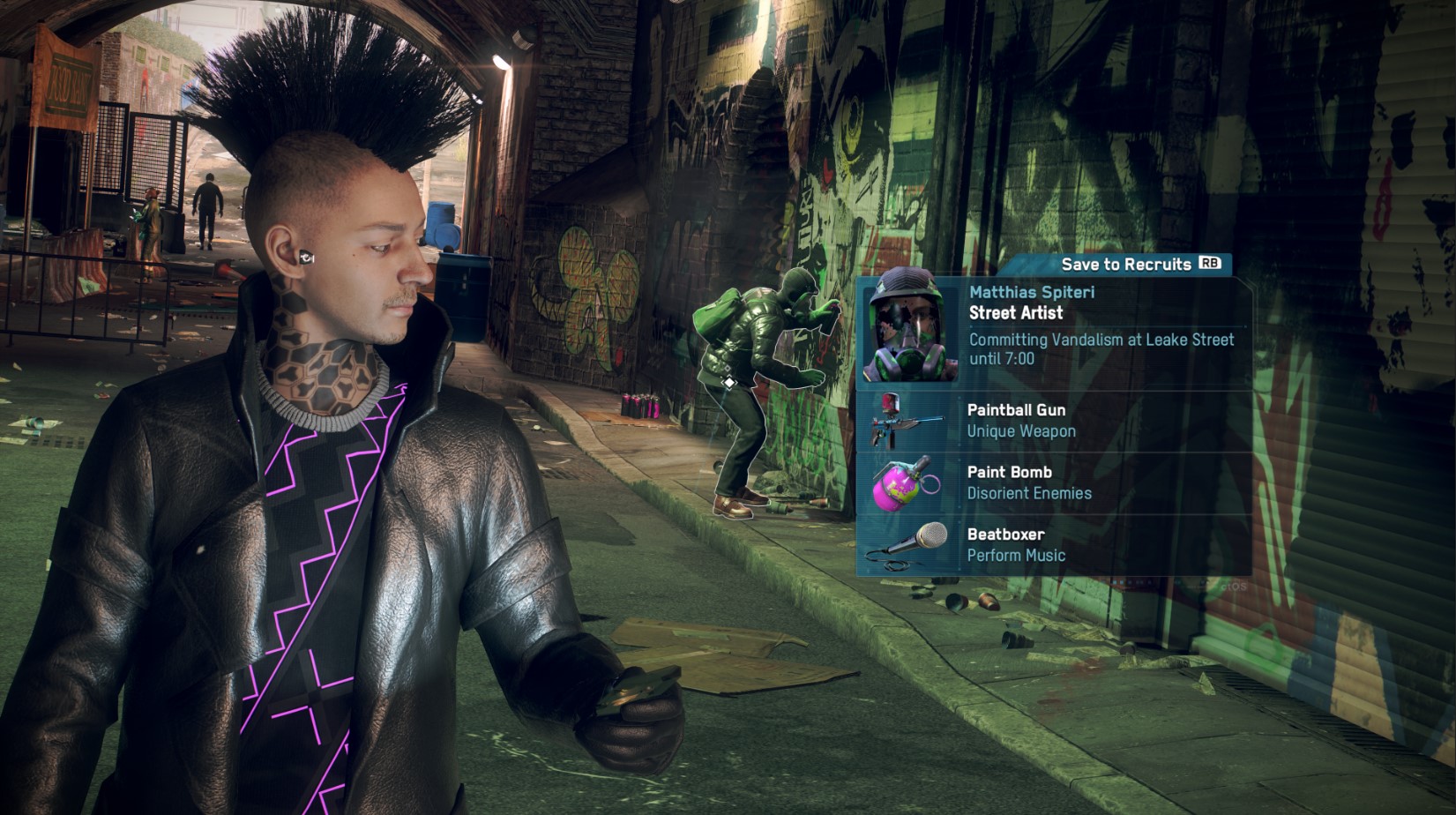 After the first recon drone I sent into the area landed harder and with more bullet holes than I’d planned, I switched tack.

While you can recruit just about any Londoner who takes your fancy, some are more useful in certain situations. Some people have skills that make them handy with drones and the like, but others have unique abilities based on their day job as well.

One of these is access to a particular uniform, and who better to tap when you need to get into a cop shop than a bobby on the beat.

Oftentimes, recruiting specially equipped citizens isn’t as easy as walking up to them and asking them nicely if they’d like to join your gang. You need to track their schedule, profile them, lift their data, and complete a loyalty mission. And it turns out the police officer the game pointed me to was, for some reason, also a bare-knuckle boxer whose loyalty mission involved straight up murdering some mobsters in a big shootout around Covent Garden.

The police officer, wary enough of DedSec for their perceived extreme methods to need an extra loyalty mission to recruit, was apparently convinced so thoroughly by my flagrant disregard for public safety to join up without another word.

But although stuff like this comes off as a little silly, these interactions are quick and action-packed enough to keep everything moving at a swashbuckling pace. Before you’ve had enough time to think too hard about how the pieces fit together, you’re already hurtling through the streets on a moped, mounting the pavement like a Deliveroo rider with a rapidly cooling calzone in their hot bag, towards your next objective.

Back at the police station, I walked straight in the front door - avoiding some private security who knew I didn’t work there by hacking their phones to ring as I pass - and upstairs through swish offices to the lab where the drone I need is being analysed. 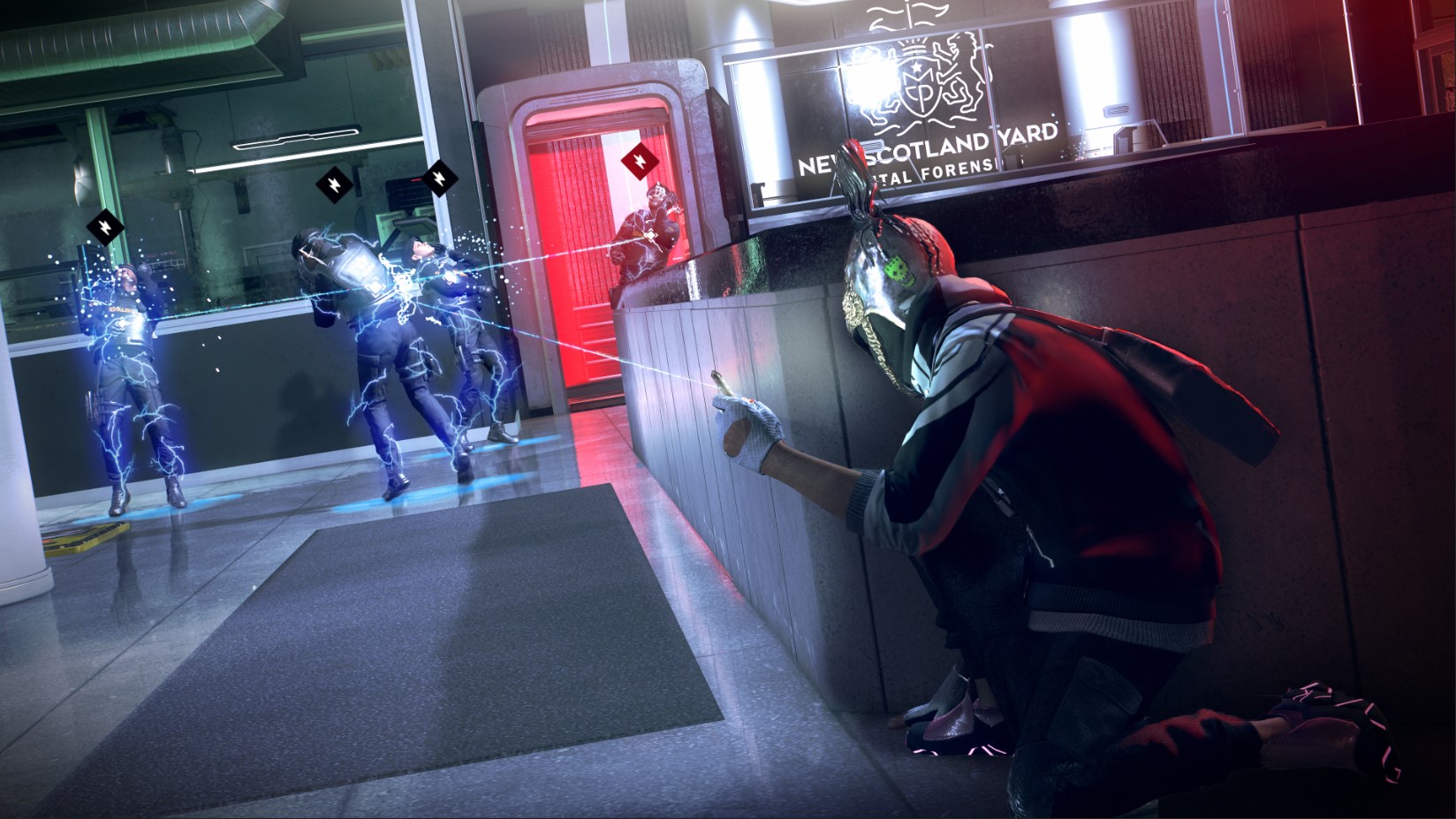 Five minutes of floaty spider-bot platforming later, and I’m back speeding off through central London - ready to surveil, infiltrate, shoot, recruit, and steal all over again.

Much of Watch Dogs Legion’s next-gen upgrade is cosmetic and works behind-the-scenes, grinding out better load times and adding the gleaming mirror shine of ray-traced reflections.

With the next-gen jump not feeling like much more than a tune up for many cross-generation games, what has me more intrigued is whether we’ve completed the concept of the timed schedule, and it's time as a box-of-the-box feature has come to an end.

Can it get more intricate than this - with so many moving parts across a huge city - or just prettier? And does that mean we can accept this as the new standard, finally tick off the box Todd Howard and friends added to the Oblivion design doc, and move onto the next big step forward in open-world design?

Ubisoft’s open worlds have long been criticised for stuffing too much meaningless filler into huge swathes of map, but by replacing density with possibility, it feels like Watch Dogs Legion is onto something.