Warface is a fast-paced military shooter without the bombastic window dressing of CoD or Battlefield. VG247's Dave Cook goes hands-on and speaks with Crytek about cutting to the chase.

Time was that the moniker 'free-to-play' suggested a visually-lacking, content-barren experience. It was all too easy to turn our noses up at games with no entry fee, simply because we assumed they'd pale when compared to the darlings of the triple-a pack. Thanks to mounting exceptions of what now constitutes free, those days are dead. Complacency is out the window, and we've successfully wallet-voted our way to a world where 'free' no longer means 'average'.

Crytek shares this sentiment. The better a studio's game, the more likely free-loaders are to embrace the nickel-and-dime mindset. Given the size and relative cost of such vast projects, both the gameplay experience and business model need to pull together and give the user something worth investing in. So far the staggered release of Warface seems to have hit the mark, with a supposed 9 million registered players in Russia as of April, 2013.

The Frankfurt studio now has its sights set on Western markets and the console space, with Warface pegged for a broad '2014' release on Xbox 360. I played Crytek's shooter recently to see if it really does deliver triple-a quality for free, and to speak with senior producer Wim Coveliers about his team's plan for the brand moving forward.

He told me that Warface has been in closed trials for two years now in China, and stressed that although the game is enjoying an impressive adoption rate in Russia, Crytek is still keen to take time with its launch elsewhere. Everything that is learned will go towards the studio's eventual Western launch. In Covelier's mind, each Warface launch is just the beginning, as he views it as a service that is updated with regular content, rather than a standalone game.

"To us, Warface is a service," he stressed, "it's not just a game that you give to people and you just start working on the next. Our development doesn't stop with the launch of the game, so that's exactly what we've been doing. it's important to note that content does not just mean maps, weapons and some new environments or something. It means new features, new modes, and constantly evolving the game we already have to make it even better, to keep listening to the community and watch the data that we have."

This is something I've become increasingly familiar with in my time at VG247. Iteration, balancing, content streams, along with a steady flow of feedback and dialogue with the player-base are all now so embedded into the MMO and F2P mind-set. It is essential to the longevity of a game like Warface, but these elements - particularly balancing - are vital seeing as it's a twitch shooter. Let me explain using my hands-on test as an example. 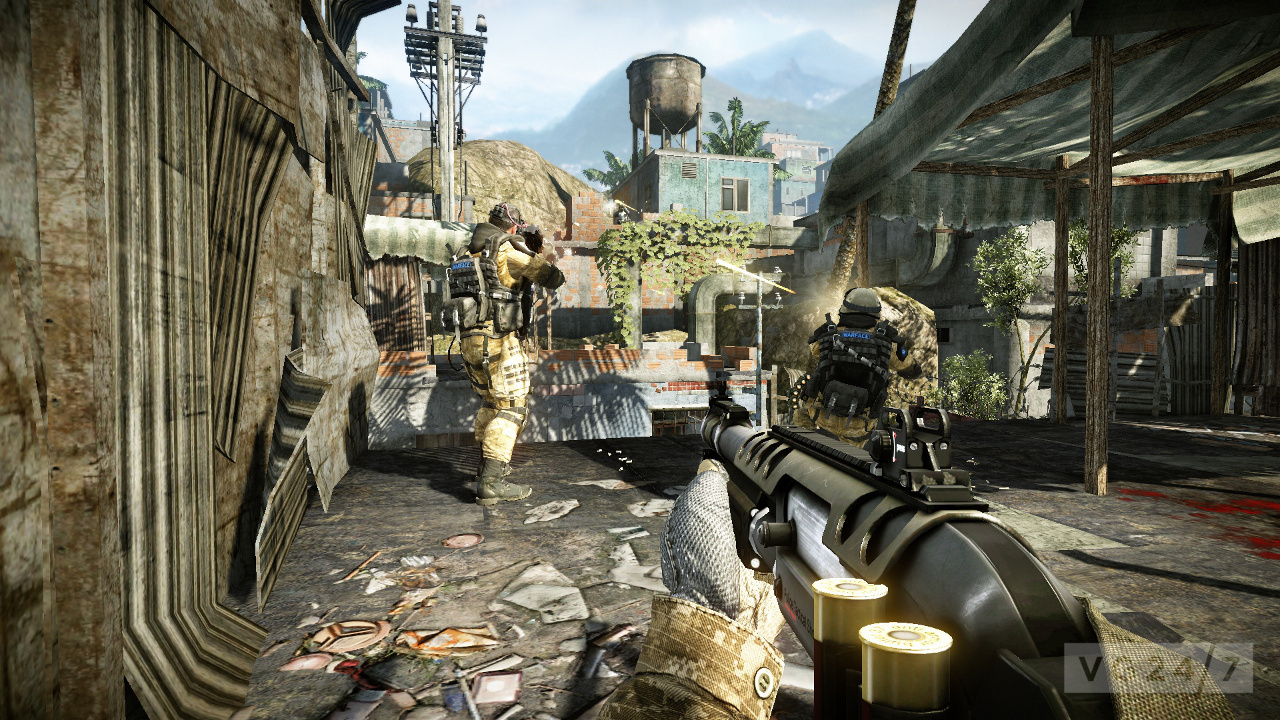 When a lot of people - maybe not you, but certainly a lot of people - think of modern military shooters, they see a playable action movie. They see constant explosions, debris flying everywhere, soldiers screaming or barking orders, air support filling the skies, all culminating into what could be described as a 'hot mess' of chaos. It's both abrasive and engrossing at the same time. Warface is fast and action-packed, but it doesn't endeavour to fill the screen with as much shit as humanly possible at any one time. It's all about substance, rather than straight-up flash.

I found it to be more about gun-on-gun war of accuracy, reaction times and tactics made on the hoof. Crytek's format veers closer to the Counter-Strike template than Call of Duty's, and even as a big fan of Activision's franchise I have to say that I found the relative calm and laser-focus of the gunplay to be highly refreshing. As I ran around a warehouse full of shipping crates, melting the anatomy of my foes with a shotgun, I truly felt as if my senses were taking a well-earned holiday away from the comparatively 'World War 3' aesthetic of Black Ops 2.

In terms of handling, Warface is fast like Call of Duty, but with a relatively pared back load-out system. It refrains from cluttering your HUD with gadgets and gizmos that threaten to upset its balance and as a result, when you die, you don't feel cheated. Well I certainly didn't at least. I was reminded of real-life paintball, due to the clearly designated spawn zones at each end of the warehouse, and a tense stand-off between troops on both sides of the arena. I wasn't spawn killed once, and rarely did players from either side make it into the other faction's half of the map.

What I felt instead, was that the claustrophobic nature of the freight container maze made the battle chaotic, but smart. Elevation is important. Knee-sliding around cover can mean the difference between taking out the guy around the corner, or being blind-sided. Laying prone in a particular area made one enemy hard to kill, until I found an alternate route to pick him off from. The map even had elevated vantage points that required a second player to give you a boost. Positioning and accuracy rule. Map-evaporating killstreaks do not.

Rifleman players can support each other by dropping ammo crates, Engineers drop armour and so on. The result is something that feels familiar to the shooter aficionado, yet fresh in a market creaking with also-rans. This goes back to what I was saying about longevity. 'Free' may be hard to ignore at first, but it's harder to stick with if it's offering little in the way of deviation. Luckily, I felt compelled to play more of Warface, but I had another interview to conduct. I had time to quiz Coveliers on what I had played. 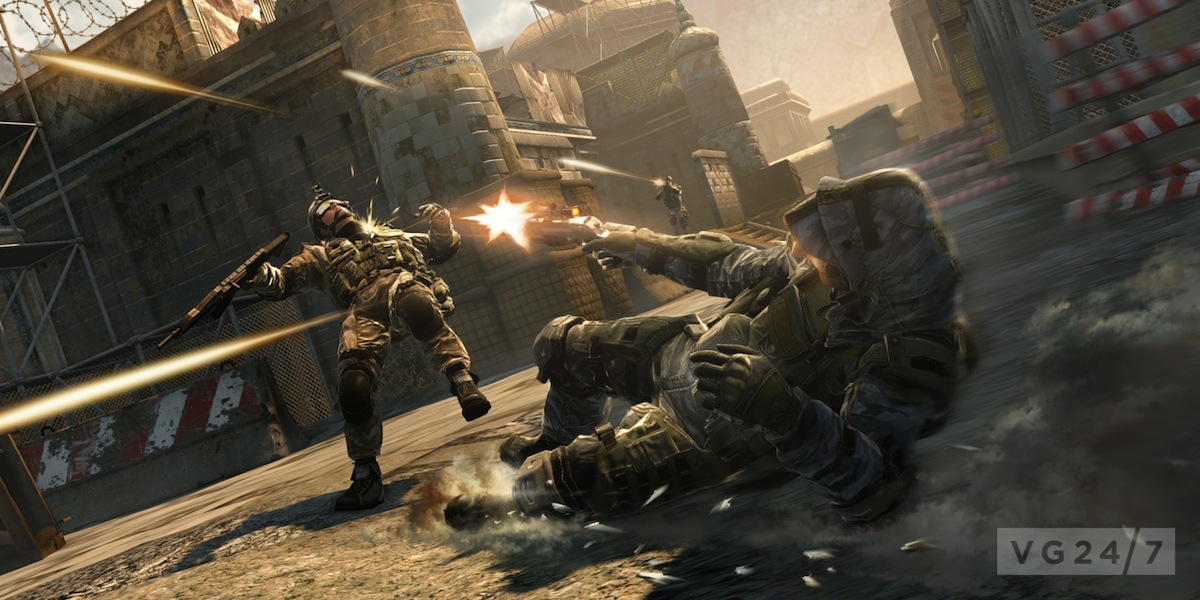 Earlier this year I interviewed WildStar producer Jeremy Gaffney, and he told me that the MMO market is entering a content 'arms race'. In short, the online game that produces the most interesting updates most regularly will be the one all the players flock to. As an online shooter, I asked Covelier for his thoughts on this as Crytek inches closer to its western launch.

"That's one of the cool things about this 'service' idea," Coveliers said of how Crytek hones Warface's balance. "You're not making something in a vacuum. You're actually making stuff that is almost in real-time checked by the data you see coming out of the service. Looking at the data is very important, but then of course it's also important to listen to what your community wants."

”It’s all well and good saying that everything can be obtained for free, but having to play for five hours to unlock a new shoddy pistol is hardly a fair alternative to paying for it instead. Warframe, I'm looking at you.”

"The thing is," he added, "content is a very vague definition of what it is. To us content is not just a new weapon or a new map. it's new features, it's new things that add to the core gameplay of the game. It's new stuff, whether that is a new map, feature or whatever. So that's what's so cool right? I mean yes, previously you would buy a game, get the season pass and then some maps.

"Some people would buy the maps and some people wouldn't, then you'd get fractured communities and stuff like that. That's exactly what we're trying to avoid here, so generally speaking, all of this stuff that we give to you will be just added to the game so you can play it. So if you add new missions, there will be new missions. You won't have to buy a DLC or any of that. You will just get that stuff, and it will become available in the game."

There are, naturally, paid items in the game's store, but as is becoming the norm, they are simply convenience boosters, cosmetic additions and are absolutely not pay-to-win items. It seems there is a growing consensus on this matter in the free and MMO space today, and it's one rule that many players are thankful for. In Covelier's mind, pay-to-win is so far off the table, it's not even in the same room.

That said, there is a third currency in Warface called Crowns that can be earned by playing well in co-op. They're tough to earn in high quantities, and can be spent on a tier of weapons that cannot be bought with real or standard in-game money. They're said to be slightly more powerful that other guns, but incredibly unwieldy as a trade-off. It may not be pay-to-win, but they do demand that you dabble in co-op mode and do so well. This may irk some players.

In the end, Coveliers understands that the free games that make the most money are not the ones that shove their paid items and currency options in your face at every possible chance. They're the ones that are simply better games. Reaching that place is not easy in the online space, but it's something Crytek is trying to understand over many years, and through intense dialogue with fans, and an iterative development process.

I said earlier that I was keen to play more of Warface. I'm not kidding, I really did enjoy it. But I'm keen to see if Crytek has spacing out its unlocks wisely enough, so that you don't need to play an unreasonable amount of time to earn new gear. It's all well and good saying that everything can be obtained for free, but having to play for five hours to unlock a new shoddy pistol is hardly a fair alternative to paying for it instead.

Warframe, I'm looking at you.

Warface is in beta right now across western territories on PC. It's coming to Xbox 360 in 2014.