Warface is Crytek's attempt at redefining the triple-a F2P market. VG247's Dave Cook speaks with Crytek Kiev on the game's development, and the state of $60 boxed titles.

Warface is a F2P shooter from Crytek Kiev, in conjunction with Crytek Seoul and several publishing partners around the globe.

Although it's been marketed as a multiplayer shooter, Warface also features a campaign. We reported on the game's single player here.

Crytek has been silent on the game recently as development on the Western build rolls on, but the Warface PAX 2012 trailer was rather tasty, showing off CryEngine 3 visuals and plenty of gunplay. Watch it here.

The game has yet to launch in the West, but you can sign up for beta play now over at the official Warface site.

Picture this: imagine getting a game like Battlefield 3 or Call of Duty: Black Ops 2 absolutely free of charge, with no hidden strings attached, no 'freemium' caps or need to pay a penny at any point in the game's cycle, ever. If I told you this with a straight face, chances are you still wouldn't believe me, possibly for fear of a hidden catch somewhere down the line.

I wouldn't blame you either, because gamers have had their fingers burned by seemingly 'free' games a few times, not to mention paid titles with shameful money-spinning measures, such as The War Z's ludicrous 'paid respawn' fiasco at the end of last year.

Warface producer Peter Holzapfel and the team at Crytek Kiev are sick of the supposed 'long con' that comes with free games, and has its sights set on releasing a full triple-a, CryEngine 3 FPS experience in the West with no price tag, where the only monetisation comes through 'convenience boosters' and aesthetic differentiators. The team is confident it can be done, and should be done, so I spoke with Holzapfel to dig away at the matter a little deeper.

"From our perspective," Holzapfel explained, "in the future there won't be any mediocrity in free-to-play because those [mediocre] games will just not be successful. There will be so much variation, but right now you would rather spend $60 on a retail title because the quality is higher, than waste time with a mediocre free-to-play title.

"Since there's no real barrier to free-to-play – people don't have to go to the store to buy their game, pay $60 up front – then there's no risk attached to it, and what we like about it is that it's very much the full product, there's no need to try and convince gamers through trailers, marketing or anything else on that side.

"With traditional games you can kind of 'trick' players into buying the game. But then after an hour they might say, 'OK this is actually not that cool', after having spent $60. But with free-to-play it's like 'OK, this product has to be good' or no one will play. So to us, we're making a cool game for a bigger audience." 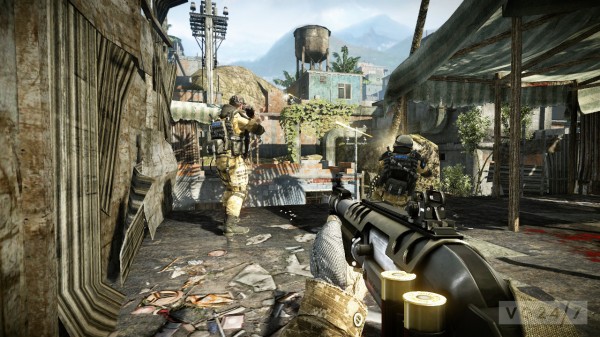 There is a certain nobility to letting players decide whether or not a game is worth their time - rather than bombarding the senses and clouding judgement with flashy, dubstep-laden trailers, PR chatter and incessant studio hype.

But that said, completing a major project like Warface over several years, only for it to launch for free and then fail catastrophically also creates a severe gamble for Crytek. The game's polish isn't under scrutiny however, as it serves as a fine showcase of CryEngine 3's capability. Couple that quality with a fast-paced experience that comes entirely free, and the prospect is hard to turn down.

Indeed, the premise may be a tad stale - set in a future where corporations hold more power than national Governments, as their own private armies wage war for global dominance - but there is an aesthetic sheen here that current F2P titles - in the majority at least - lack. Once Western gamers get to see more of it this year, it could become rather difficult to ignore.

The game is already seeing steady interest in other territories. In fact, VG247 reported in November that Russia alone has over five million registered users, while Eurogamer reported that over 500,000 people had pre-registered for the game's closed beta across the UK and America as of August 2012.

It's clearly turning heads, and while it is free, there are - naturally - a list of entirely optional paid-for additions, should consumers wish to partake. Most games are designed to make money after all, so I asked Holzapfel for details on the nature of Warface's monetisation.

"The ecosystem is still being tested for Western territories," Holzapfel replied, "so it's not really set in stone. But the plan that we have for it is that any item you buy in the game can be bought with real currency, or in-game currency.

"There are also certain convenience issues on top of that as well, such as experience boosters and set boxed bundles which will give you early access to certain weapons. You can also pay for 'resurrection points'. In co-op you can either wait for your team-mate to revive you - which enters into the social aspects of working together as a team – but if you want to jump directly back into the game you can use a 'resurrection point'"

Paid boosters are becoming part and parcel of the free-to-play space, geared towards the time-poor gamer who can't commit his or herself to the levelling-up grind. Some would argue that these boosters place gamers on an uneven keel however, and that paid incentives should never result in anything more than a cosmetic difference.

It's an ongoing debate at the moment, but at least it's not falling into the dreaded 'Pay to win' territory, although even that term is starting to bleed into other monetisation models. It's often said that the free-to-play market is still trying to nail down a solid, fair and universal money-making strategy that doesn't burn consumers, while at the same time keeps studios afloat, but sceptics might argue that such a balance can never be fully achieved. 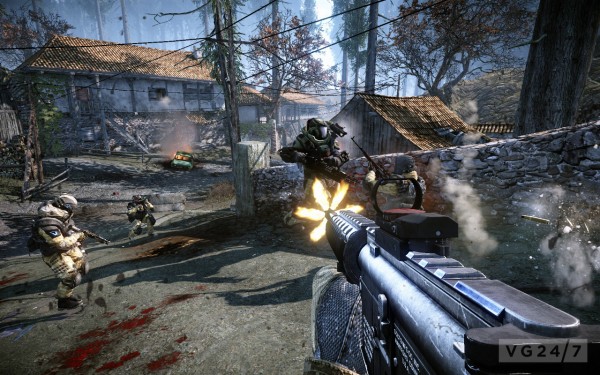 Finance aside, Warface wears a recognisable visage: it's an online shooter with soldiers broken down into typical classes - the 'Rifleman' class who can drop ammo, the 'Medic who can patch up fallen troops, the tech-savvy 'Engineer' and the 'Sniper' who is doubles up as long-range marksman and reconnaissance expert.

If you play shooters then you already know how - at base level - these roles function and this feeds back into what Holzapfel was saying earlier about free-to-play barriers. In Warface there are no barriers. Everything is spelled out for you in full, it's easier to relate to if you're an FPS fan, and because it's free of a price tag, chances are you'll be more likely to take a punt on it. You've literally got nothing to lose but time itself.

I asked Holzapfel how Crytek - a studio that has historically operated within the $60 boxed product market that he described earlier - took to the challenge of stepping beyond its comfort zone and into this volatile emergent market. It's clear that while the studio is still learning the ropes - as are most free-to-play studios - the key to understanding the market is to look at it on a territorial basis, rather than taking a sweeping, global approach.

"I think with the core second-to-second gameplay, we've pretty much got that laid down," Holzapfel explained, "and we know what we're doing there. For example, with Warface we wanted to do something that is easy to get in to but challenging, and something you can play with your team-mates. So on that level we know exactly what we need to do in making that certain type of gameplay.

"What was definitely different was that – because this is a global franchise – we've had to work with different partners in different territories. We worked with Tencent in China, Nexon in Korea, Mail.ru in Russia and Trion Worlds for Western territories. All these different partners obviously want to cater to their market with the best experience possible, and they all come from different cultural backgrounds on how they see this game.

"So the further we go away from the core gameplay experience, we start to put more into balancing, or how players interact with each other and how the progression system works. We've learned a lot with their help in learning how different people play our games."

When an entity as established and technically proficient as Crytek admits to needing help in understanding certain corners of the market, it almost feels humbling. There is no shame in it, as some would say the free-to-play market is a confused space at present.

But with over five million registered players already in the can in Russia alone, and at least half a million people eager to play the Western release of Warface, it seems like a lot of people have already placed faith in what Crytek Kiev is capable of.

We'll have more on Warface this year, but if you want to register your interest in the Western beta you can register here.