Patch 1.0.4 is now available for Warhammer: Vermintide 2, and it's rather beefy.

One of the main areas of focus for developer Fatshark was the Skittergate level and the end fight. Today's patch solves many of the bugs in this area.

Due to Bubblespit Halleberry being rather hard and "unforgiving," players will find the max health reduced by 10% for all difficulty levels. The team wanted this fight to remain challenging and different from the other Lords, so it only tweaked the balance a bit.

Other changes include tweak to how spawn roamers and specials are handled.  Each a level is played, the Conflict Director divides the level into segments, and will now spawn either Skaven or Chaos enemies, or a mix of both.

An issue on Legend difficulty regarding the amount of horde waves using the default Recruit settings was fixed.  Spawn hordes will now number in fewer than three waves with timing "tweaked specifically for the Legend experience."

Full notes for Vermintide 2 patch 1.0.4 pulled straight from Fatshark are below.

On a side note, if you have yet to play End Times - Vermintide it is on sale through Steam until April 1 for up to 75% off. 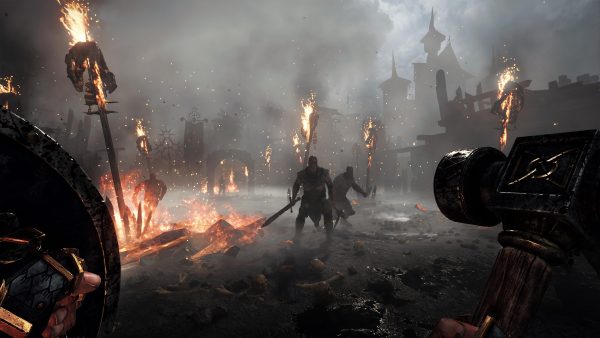 This patch solves many of the bugs reported by players.

Bubblespit Halleberry turned out a bit harder and more unforgiving compared to the other Lords, mainly because of unavoidable attacks and a high health pool.

Team still wants the fight to be challenging and different from the other lords, but it's tuning the Burgersnot fight to make it more fair and balanced.

How roamers are spawned is being tweaked.  There is now a smoother distribution of elites in general. The team felt it had been a bit heavy on armored types on the higher difficulties.

Tweaks to how specials are spawned, e.g. Gutter Runners, Warpfire Throwers, and Hook Rats: each time you play a level, the Conflict Director divides the level into segments, which primarily spawn either Skaven or Chaos enemies, or a mix of both.

Fixed an issue on Legend difficulty with the amount of horde waves using the default Recruit settings. Should now correctly spawn hordes across no fewer than three waves with timing tweaked specifically for the Legend experience.

Overall, the balance changes to Legend provide a more varied, fair, and fun experience on the higher difficulty setting, with three times the size of hordes for good coop fun.

The way Specials are tweaked also improves the variations of enemies, but at the same time, the patch increased timings to make for less spammy playthroughs.