We may be getting close to seeing controllers that capture natural hand motion in VR games. 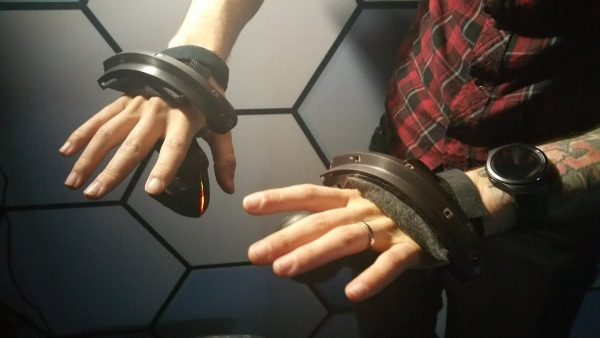 At Valve's Steam Dev Days event, the company made a bevy of announcement, reveals, and things of that nature. One of the more interesting pieces of hardware sighted at the conference is these new prototype controllers for VR.

These controllers are smaller versions of the ones that come with the Vive, and they can sit in the palm of your hands. They don't have a name just yet, but they're designed to translate natural hand motions into VR input.

Because you can hold them with open palms, you'll theoretically be able to hold and drop items in-game the same way you would in real life - by closing and opening your hand.

New Valve controller prototype was really cool. Much closer to having hands in VR vs holding a tool. pic.twitter.com/8LzEkGDEn1

As you can see in the pictures above, via @mxweas and @shawncwhiting, they're very small and can be held in place with straps. The video below illustrates what you'll be able to do with them more clearly, via @downtohoerth.

Thank you @saniul for getting a video of me freaking out with the new #Vive controllers #SteamDevDays ? pic.twitter.com/kMPM28Ogir

There's currently no details about price, or when these controllers will be available to the public. It's also worth noting that the current Vive controllers do allow for holding and dropping in-game objects, the new prototype take things a step further.