The video game industry has issues when it comes to the portrayal of women. Even though things have improved in recent years - as we begin to see more female leads in games like Horizon: Zero Dawn, as well as more games enabling players to choose their gender like Assassin’s Creed Odyssey (despite infamous claims in the past it would be too costly to implement) - the problem is nowhere near resolved.

The upcoming Dead or Alive 6, which allegedly tones down its sexualised nature, has since revealed a limited edition bundle for Japan that includes a body pillow of two of the game’s women in compromised positions, alongside sexualised mousepads. Meanwhile, the series’ PC volleyball spinoff, Dead or Alive Xtreme, was recently updated to allow players to tug at the swimsuits of its female characters.

Video games have an uncomfortable history of sexism, and companies have failed to make the industry more inclusive for women, non-binary, and trans people who don’t fit stereotypical expectations of a ‘gamer’. These are issues that spread far beyond a single title.

However, times have changed. This year has been defined by the #MeToo movement, and women around the world have been speaking out against decades of sexual harassment, assault, and mistreatment from men in positions of power. 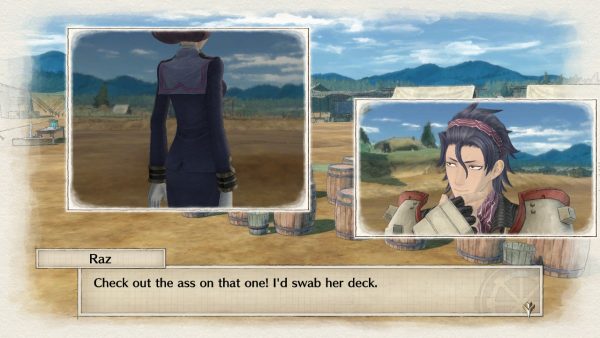 Prominent politicians and celebrities are being held responsible for their actions, and big companies are being held accountable for fostering toxic corporate culture. Investigations into sexism at developer Riot Games led to an admission of wrongdoing and promises to reform. Even before that, reports in France pointed to an unwelcoming, sexist and racist workplace at developer Quantic Dreams, although the developer denies these allegations.

Thanks to countless brave people coming forward and speaking out against such abuses, a worldwide re-examination on sexual misconduct has begun. Unfortunately, it seems Valkyria Chronicles 4 didn’t get the memo.

A few hours into the game, the mood within Squad E, the battalion of troops you take charge of throughout the campaign, is jovial. You’ve just liberated the city of Reine from Imperial forces and are continuing to advance through their territory. Your squad has a chance to relax after a tough battle.

Riley, one of the main characters and leading figures within the group, is talking with the commander - a childhood friend called Claude Wallace - about tweaking grenades to give them an edge against the enemy.

Raz and Kai - two other characters within your squad who are also childhood friends - are watching this conversation from a distance. Kai’s brother left the army and asked their sibling to take their place, so Kai disguised themselves as male and did as their brother asked. 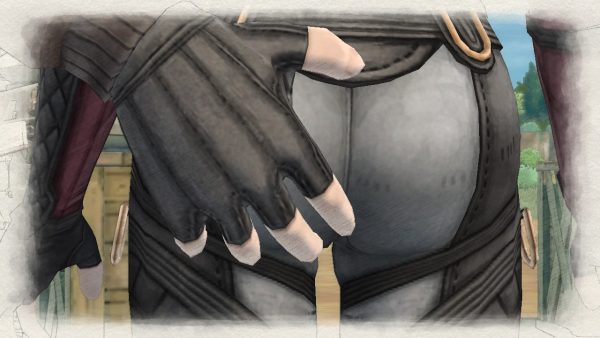 Raz is the stereotypical bad boy. While watching the conversation between Riley and Claude unfold, Kai notes that they sense a void between the two characters. Raz responds by saying that it must be Kai’s “women’s intuition” kicking in. Kai snipes back, reminding Raz that, in the army, people see them as a man. Raz then stands up, walks behind Kai, and grabs their butt. “No guy’s got an ass this tight.”

This scene sets the tone for the rest of Valkyria Chronicles 4’s campaign. Although the game has a diverse cast of male and female characters with unique personalities, the women on either side of the war are degraded, sexually harassed, and mistreated.

For women in this game, a respectful experience is impossible. When they’re not being groped by their squad mates, the camera frames them at angles that accentuate their sexual value over their value to the squad.

Whenever a character speaks positively of a women's contribution, it's condescending in tone. “At least she’s good for something.” A women's ability is never given the same level of treatment their technical skills would grant them as a man. At multiple points within the game's script, a woman is not even considered a person - they are merely a possession. After all, “A gentleman shouldn’t keep his ladies waiting.”

Even worse, the perpetrators of these sexist acts face no punishment. Many times, these moments of degradation occur openly and without shame. No one in the squad is surprised by Raz’s derogatory comments towards women when they happen, and often they’re allowed to pass without incident. 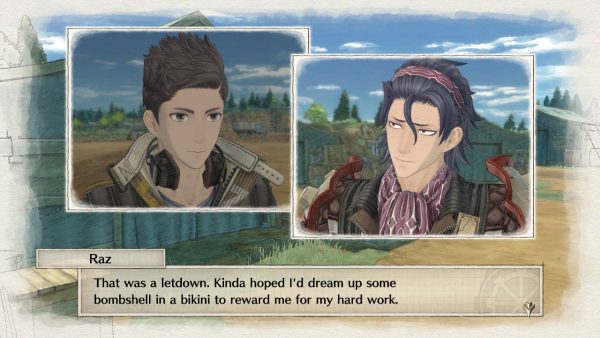 Upon arriving at the base for the first time, the men stare at a female navy officer while stating their desire to “swab her deck”. The response to this is a resigned sigh. There’s no comment on the fact these sexual advances may be unwanted.

Although Kai does punch Raz after grabbing their butt, Raz is otherwise unpunished for these actions. Raz isn’t reprimanded by Claude or anyone else in the squad. In fact, the event is laughed off before it is swiftly forgotten. Instead of condemnation, the actions are silently condoned, portraying them as being acceptable.

Throughout the game, the female characters are simply accessories to the sexist whims of other men, while their unchecked sexist remarks are treated as normal.

The issue with the problematic nature of the writing within Valkyria Chronicles 4 is that video games don’t live in a bubble. Although many would like to argue otherwise, video games are inherently political and are influenced by the political leanings of their creators. Furthermore, video games can influence a person’s views.

The moment Raz’s hand clenches Kai’s butt, the game frames it so the act fills the entire screen. You would think, with it being such a big moment, the game had something to say. Instead, it simply normalises these actions - if you act in such a way you won’t get punished. 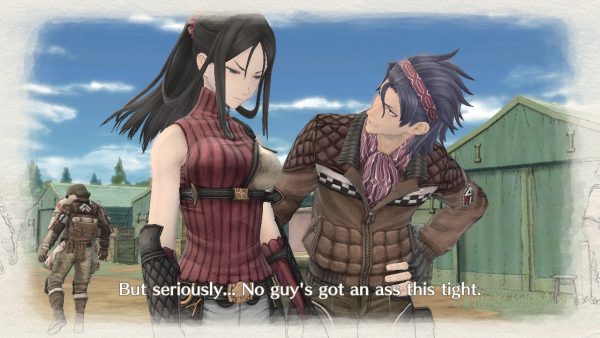 This sort of mindset becomes even more dangerous when you consider the state of the world in 2018. While the #MeToo movement has brought attention to the injustices faced within the workplace by women at the hands of men abusing their positions of power, we are far from shifting the needle towards genuine reform. We are at a time where, in the US, politicians are running to the defence of a Supreme Court Judge accused of sexual harassment.

This situation is eerily similar to when accusations were made against another potential appointment to the court in 1991. For all the progress, we are a long way from there being any serious consequence for sexual harassment and assault by powerful men.

When you have a game like Valkyria Chronicles 4 that contains a distinct lack of condemnation or consequence for such actions, you are setting a dangerous precedent.

It normalises the idea that women are inferior to men, that they exist for male satisfaction, and that unwanted sexual contact should be welcomed and not challenged. Such portrayals make it harder for attitudes towards women to change, even with the pressure of the #MeToo movement shedding light on the issue on a global scale.

Collectively we should be working to dispel and call out such mistreatment. Only then can things begin to change for the better.