Blizzard considers this one card nerf the most controversial change it's ever made to Hearthstone. 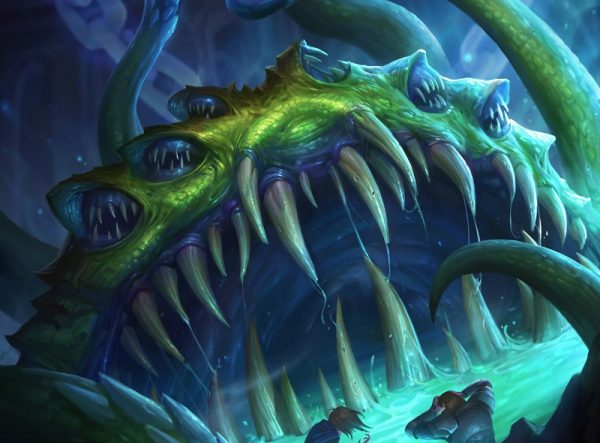 Hearthstone has a ton of card nerfs planned for its upcoming 6.1.3 patch, including one Blizzard is calling the most controversial yet: balances to "Yogg-Saron, Hope's End". Originally introduced in the Whisper of the Old Gods expansion, Yogg-Saron casts a random spell for every spell previously cast in the match, completely altering the game's board in the process. It was clearly intended as a "just-for-fun" card, but since Yogg-Saron has the potential to upset high-level tournaments, its properties will be tweaked slightly.

Once the update is live, Yogg-Saron will stop casting spells when its Battlecry is interrupted, which happens if it destroys itself, is silenced, or is returned to the player's hand. Blizzard hopes that will balance its ability while still making it entertaining for casual play. "We tried a bunch of things and we think this is a significant enough nerf that it could reduce the amount it gets seen (especially in tournaments), while still maintaining the dream for people who love the card," Blizzard wrote in its blog.

Of course, Yogg-Saron isn't the only card receiving nerfs with this patch. Perhaps most notably, the Shaman card "Tuskarr Totemic" has been rebalanced to only spawn standard totems, not the advanced type that might dominate the game. "Call of the Wild" has been increased to 9 mana, while the immensely useful "Execute" card will be increased to 2. You can read the full changes here, which will be put in place before the Hearthstone Championship Tour.