Tomb Raider comes with a lot of baggage. Can it match the brilliance of Lara's original adventures, or is it another reboot that misses the point entirely? Dave Cook gets himself shipwrecked to find out.

Tomb Raider launches worldwide on March 5th, except for Japan where it launches April 25th.

I haven't included multiplayer in this article, as Stace Harman did a superb job of summing up Tomb Raider's online component here.

Crystal Dynamics recently released an 11 minute gameplay trailer that shows off many of the game's mechanics. You can watch it here.

Crystal Dynamics has defied convention in its Tomb Raider reboot. The franchise has hit a few bumps over the years, such as the woeful Angel of Darkness, but largely it's existed as a critical and cultural phenomenon.

When it was handed this project, the pressure at the San Francisco studio must have been tantamount to physical torture. Luckily, it's brilliant.

The Lara of old felt cheesy to me. She showed no empathy for her attackers and was over-sexualised to an embarrassing degree, although that's more a failing of the crass marketing world.

Here, Lara feels tangible, real. You actually want to give a shit about her predicament and journey from fledgling archaeologist to the hardened adventurer we know.

That's what all good reboots should be - the re-working of a backstory into something we can relate to in modern times. They also have to capture the essence of what made the source material so endearing. I thoroughly enjoyed Starbreeze's Syndicate reboot, but did it deliver the same tone of the original? Did it hell.

The Uncharted inspiration is clear within Tomb Raider's first minutes. Visibly, no expense has been spared in delivering mind boggling set-pieces and using every cinematography trick in the book to create a dizzying spectacle. It's not just a string of uninvolved stunts either, as there's a solid game beneath the explosions and vertigo. This is high entertainment. 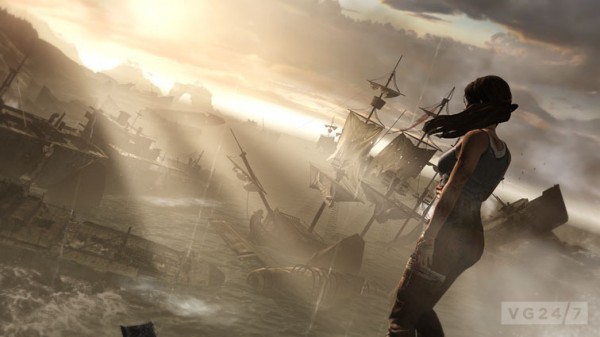 Whether climbing around a rusted Japanese war plane, or shimmying along the side of a waterfall, you can guarantee the view will always be breathtaking. When Lara is on solid ground the island feels dense and inviting, with hidden ammo and salvage stashes hidden around every corner. Like Far Cry 3, you will want to explore off the beaten path at all times.

That's not an easy thing for developers to achieve, and it's all down to the game's expertly-crafted island setting. Crystal Dynamics worked wonders when it created the original Soul Reaver, a game world that borrowed heavily from The Legend of Zelda's playbook. Tomb Raider is no different, presenting players with a large, interconnected cluster of environments full of inaccessible areas.

You'll jot down every blocked path in memory for when you have the correct tool to pass through. Some sheer cliffs can't be climbed at first, so Lara needs to find a rock-climbing axe to proceed, while other routes are blocked by crude wooden barriers that need to be blown open by a quick shotgun blast. These tools are given to you constantly, causing the world to grow a little bit each time. It's a gratifying progression method that will hold your interest for the duration.

Exploration and climbing are bookended by moments of gunplay. Shooting is slick, weighty and works a treat. The cover-mounting mechanic is automatic but works flawlessly every time. Given how poorly auto-cover has been handled by other studios, this is another victory in Tomb Raider's long list of positives.

During battle, headshots and stealth kills will net you bonus XP. In fact, all of your kills, animal hunting, progression milestones and gathered collectibles feed back into Lara's experience. You can spend this on new 'Survivor', 'Hunter' and 'Brawler' perks at base camps dotted around the island, ensuring that everything feeds back into Lara's progression. No time feels wasted. 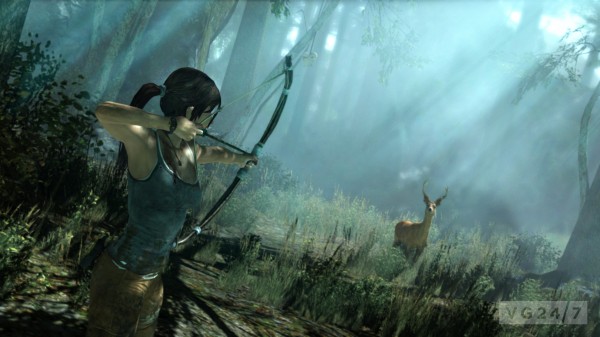 Tomb Raider is arguably one of the best action games in recent memory, but it can't call the lion's share of its accomplishments its own. Yes it borrows heavily from Uncharted, the world design riffs on Zelda, and the cover shooting isn't new, but I think that getting too hung up on its inspiration is to miss the point. This is a thoroughly enjoyable game regardless.

One thing I also have to point out is that as much as I adore the Uncharted series - and I really do - they are essentially 'one-track' games. Tomb Raider has exploration and free roaming in most of its hub areas. That Crystal Dynamics has managed to keep its action focused while delivering a large world is no small feat.

To better explain I made a shit infographic on the matter: 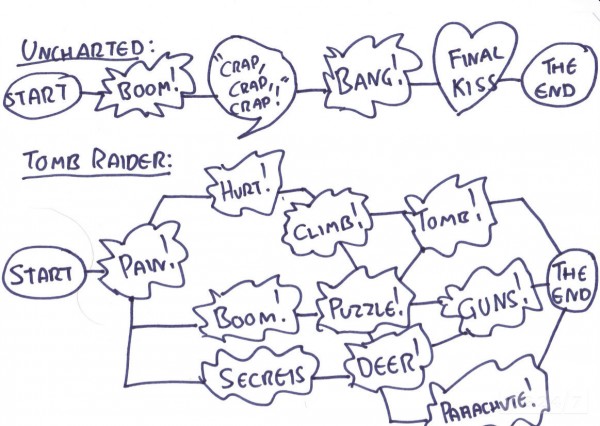 Does Tomb Raider succeed as a reboot however? While Lara's initial shrieking and grunting may grate on some players, both her transformation and the game's plot grow intriguing as you progress. It also nails those moments from previous games where you sat back to look at the scenery and thought, "How the hell do I get up there?"

The same can't be said about the puzzles. Once epic in scope, here they feel rudimentary and included through obligation. You'll figure them out in a few moments, thanks largely to the game's 'Survival Instinct' view. It's like a sonar ping that highlights interactive elements in the world, typically suggesting the correct path or parts of a puzzle solution.

Everything else works. The platforming is spot on, the set-pieces are exciting and the combat handles perfectly. If you're a staunch fan of the original game's focus on puzzles, you may be left wanting here. For everyone else, Tomb Raider sits comfortably alongside Uncharted as an example of action and pacing handled correctly.

This should be the start of a solid new Tomb Raider arc. Whichever developer is handed the task of creating a follow-up, it will have to think hard about how to create mechanics and ideas to call its own, instead of drawing clear inspiration from other sources. For now however, rest assured that the series is off to an accomplished reprisal.

Disclosure: To assist in writing this article, Square-Enix sent Dave a copy of Tomb Raider on Xbox 360. No merchandise or advertising was offered or accepted.