A new Call of Duty: Black Ops Cold War trailer was released just prior to the weekend, but has since been banned in China due to its inclusion of footage from the 1989 Tiananmen Square protests.

The news comes from CBR, where a report on the trailer was recently published. As it turns out, there are actually two separate teaser trailers - one of which is less than half as long as the other.

You can check out the original, lengthier trailer in the video embedded below. This is the one that includes the clip that has since rendered the trailer banned, and caused Activision to release a new version in its stead.

If you skip to 1:05, you'll see the footage in question. It's less than a second long, but Activision still released a shorter trailer without it. You can check out a screenshot of the relevant part of the video below. 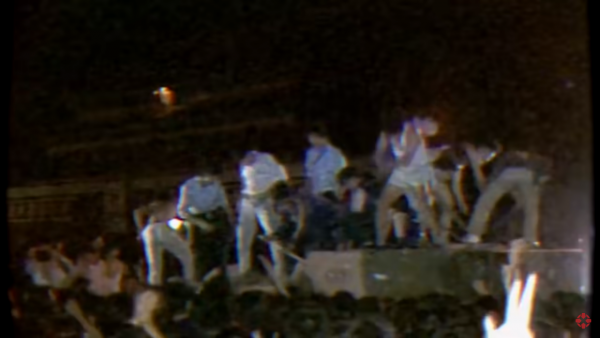 That trailer was published four days ago, but a shorter version was posted on the official Call of Duty YouTube channel two days afterwards.

It features a lot of the same material, and focuses on the same rhetoric as the original for the most part, but is missing information about the Perseus codename referenced in the first iteration of the trailer, as well as the clip from Tiananmen Square in 1989 (and several other parts).

Check out the new trailer for yourself below.

For those unacquainted with what happened in Tiananmen Square in 1989, student-run anti-establishment protests in China were forcibly stopped by the People's Liberation Army. The incident is commonly referred to as the Tiananmen Square Massacre, and although no exact figures are known, the death toll is believed to be somewhere from several hundred to several thousand.

A new reveal for Call of Duty: Black Ops Cold War is scheduled to air on Wednesday, August 26 - at present, it is unclear how Activision will address the situation.