Thief is in development by Eidos Montreal, the studio responsible for Deus Ex: Human Revolution and Tomb Raider’s multiplayer mode. It’s set for release on PC, 360, PS3, PS4 and Xbox One from February 25.

Originally announced in 2009, Thief has since undergone numerous designs changes, including ditching its QTE elements, scrapping its XP system and even changing how you open doors.

At set points, the camera switches to third-person to show Garrett as he negotiates climbing sections. Somewhat unnecessary but at least the transition between viewpoints is smooth.

In a nice touch, the light bar on the DualShock 4 glows bright white when Garrett is standing in the light and a dimmer blue when he’s safely ensconced in shadow.

If you’ve been monitoring the development of Eidos Montreal’s upcoming Thief reboot you’ll be aware that it bears more than a passing resemblance to Arkane Studios’ Dishonored. The comparison is understandable and, to some degree, inevitable given that both explore aesthetically similar cityscapes and feature a narrative that deals with a corrupt overlord, a widespread sickness and a protagonist who is talked of in hushed tones as part man, part myth.

Having recently spent several hours working through the first four chapters of Thief, I’ve been able to explore the mechanics, features and myriad tweakable game-play options that prove that, for better or worse, Thief is its own game with a different focus to Dishonored. Where Arkane’s action-adventure facilitated stealth play, Thief requires it, for while you can tackle a lone guard – two, at a push – protagonist Garrett lacks Corvo Attano’s impressive arsenal of toys and tricks to take on a room full of guards.

Thief also explores numerous concepts that call upon a handful of other titles, from the original Thief series through to Square’s own Hitman and Tomb Raider titles. However, it adds enough interesting touches that it will stand apart from its influences, to succeed or fail on its own merits, come February’s end.

The a la carte experience

The first thing to note about Thief, before you get to the game proper, is the various options available for adjusting difficulty and tailoring the game-play experience to your liking. Menus are rarely a sexy part of game design but here the sheer number of options on offer hints at Eidos’ desire to welcome both series newcomers and veteran fans alike.

Aside from the expected choice of difficulty levels – which serve to heighten guards’ awareness, increase the scarcity of resources and prohibit the harming of civilians – there’s also a custom difficulty option that allows for the tweaking of numerous game-play factors. Amongst these are options that increase the cost of resources or mean that food cannot be found in levels and instead must be bought. There are tweaks that reduce Garrett’s aptitude for combat so that you can only incapacitate guards from a stealth position, or an option to veto kills or knockouts of any kind. You can take on Iron Man mode right from the off or push your stealth game to its extreme by setting a parameter that states that being detected results in immediate mission failure.

All of these options, plus half a dozen more, come with point multipliers that feed into leaderboard stats for the highly competitive. Similarly, mission conduct is evaluated to determine whether you are categorised as Ghost, Opportunist or Predator, which is determined by factors such as going undetected, purloining loot or incapacitating guards. It appears that obtaining a certain number of these classifications opens up new challenges outside of the main game, which not only offers replay value but also gives you a reason to revisit individual missions to experiment with different play-styles. 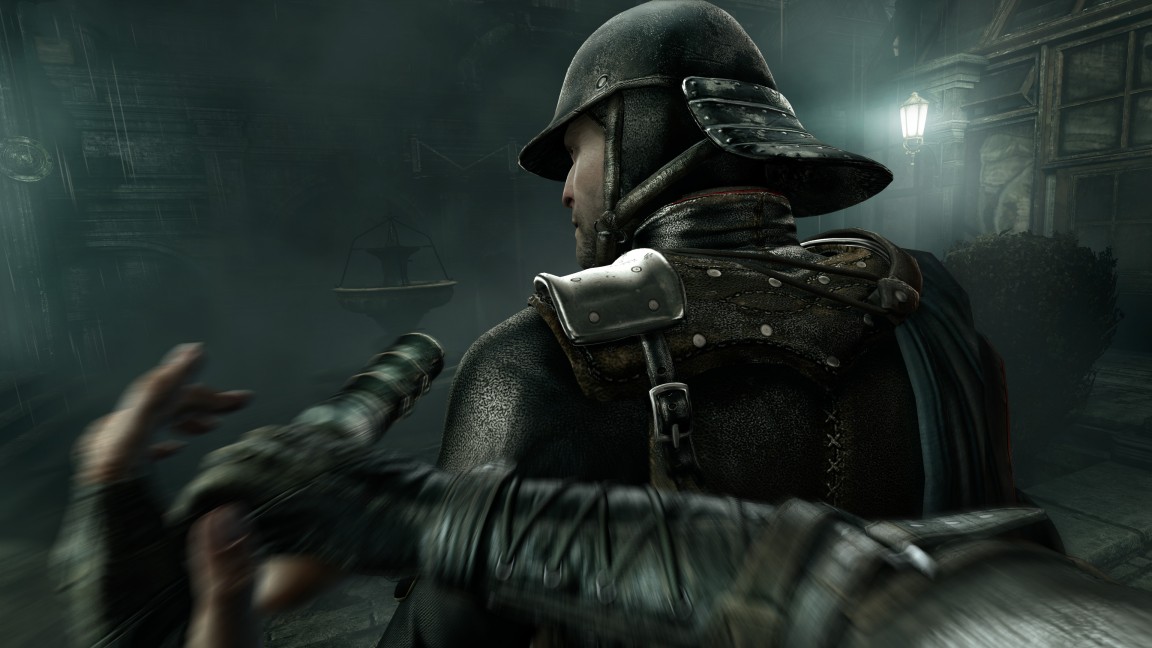 However, the most telling option is the one that allows you to permanently disable Focus, Garrett’s equivalent of Batman’s Detective Mode, and this switch is available in both the custom difficulty mode and as an in-game option on any of the standard difficulty levels. Focus is a crutch that serves to highlight guard positions, reveal mission clues and can be employed in everything from picking locks to identifying enemy weak spots. It typifies the current trend in game design for streamlining a play experience by way of a gimmick that carries a sketchy narrative justification and so I’m glad to see it neutered here.

If you do wish to embrace it, Focus has its own upgrade options that allow you to exchange gold for new perks like the ability to 'see' guards’ footsteps (as in The Last of Us), reveal telltale hand-prints (Arkham Asylum) and conveniently colour-code items and enemies (Assassin’s Creed). Focus is perhaps the single most radical departure from the Thief of old and the fact that Eidos has tweaked the game design since earlier builds to ensure that you need never rely on it is a positive sign for those who derive their enjoyment from problem solving and exploration rather than the immediate gratification of a payoff.

Outside of the comprehensive menu options of Thief, there are several elements that suggest the fate of this reboot could go either way. It’s important to note that what I played was far from final code and so several issues that I experienced should be ironed out during the remaining polishing time over the next couple of weeks. There’s also the slightly ungainly manner in which Garrett negotiates the environment, occasionally bumping up against walls that he should shimmy up or simply being unable to clamber over something because it lacks the necessary properties that mark it as scalable.

Conversely, though, there are the delightful touches that serve as encouraging signs rather than troubling omens. Turning off the visual guide for picking locks and doing it by feel alone while using free-look to spy out any approaching guards constitutes a satisfying element of role-play, while habitually extinguishing light sources and settling back to observe enemy AI before slinking past guards is empowering. Combined with Garrett’s trademark items of stealth and distraction, there’s strong potential for the wonderfully immersive experience that Eidos Montreal is aiming for and that every Thief fan desperately wants it to achieve.

On a knife edge

Thief is an interesting proposition that currently hangs in the balance. Its high-profile, occasionally turbulent, development process has been scrutinised since the original announcement back in 2009 and the number of design concepts that have been tried, tested, criticised and iterated upon have left fans justifiably unsure of what we’ll end up with next month.

It’s good to see Garrett back in action, though, and if it’s a little too easy to pick out elements that we’ve seen elsewhere then perhaps a sufficient level polish can prove it to be greater than the sum of its parts when it finally arrives in February.