The last time Stace Harman visited Square Enix to see Thief he had an issue with its doors; after a more recent hands-on session he has a different axe to grind.

Thief is in development by Eidos Montreal, the studio responsible for 2011’s Deus Ex: Human Revolution and the multiplayer component of this year’s Tomb Raider reboot. It’s being published by parent company Square Enix.

Garrett’s back-story and motivations were explored in this five-minute dev diary.

Last month, Dave spoke to Eidos Montreal to find out what drives this new, rebooted Garrett and how it feels to have no friends.

Thief producer Stephane Roy has been talking about the advantages offered by Xbox One and PS4.

It may come as a relief to hear that I’m not here to talk about doors.

Happily, the issue of doors has been addressed and, for the most part, fixed. Garrett now opens the door by using his hand instead of an invisible force field. He can also spy through the keyhole to assess the scene beyond. We can all be happy about that, right? I don’t have to write about doors, you don’t have to read about doors and Square Enix and Eidos Montreal don’t have to wonder what’s up with this weird guy and doors. So, doors are off the agenda; excellent.

There are, however, one or two things about the AI that require attention.

I should start by saying that context is invaluable commodity when it comes to managing expectations. Had I known back in April that Thief is first and foremost a current-gen project I would have had different expectations (although the door thing would still have bothered me).

Now, thanks to a frank chat with Eidos Montreal producer Joe Khoury, I have a better understanding of what to expect come February 2014. This enlightenment came about during a discussion of the different levels of awareness of Thief’s AI, in which I asked whether the extra grunt of PS4, Xbox One and PC might be employed to enhance the AI routines instead of just making a prettier world.

“For us, instead of looking at what we can push on next gen we wanted to push as hard as we could on current gen,” Khoury clarifies. “But here’s the thing, in other areas in terms of loading, streaming, displays of particles, levels of detail...it’s visual and that’s where we’ll see the biggest gains.”

In an ideal world, the PC, current-gen and next-gen versions of Thief – and every multi-gen release, for that matter – would be handled by distinct teams that could best leverage the advantages of each platform. However, that would be massively resource intensive and, in most cases, prohibitively expensive. Understanding Eidos’ focus, I now approach Thief as a title that comes at the end of this generation rather than one that’s intended to usher in the next.

That being the case, the AI is unlikely to represent an evolutionary leap over what we have now, but will nonetheless require buffing to a fine sheen over the remaining months of development time. Khoury assures me that the project has reached the “feature-lock” stage and so now the team are all about progress and optimisation.

This knowledge provides context for the two hours in which I explored Thief’s dark corners and so while there are currently several niggling issues I’m encouraged by the notion that four months of hard work will be reflected in the quality of the final build. 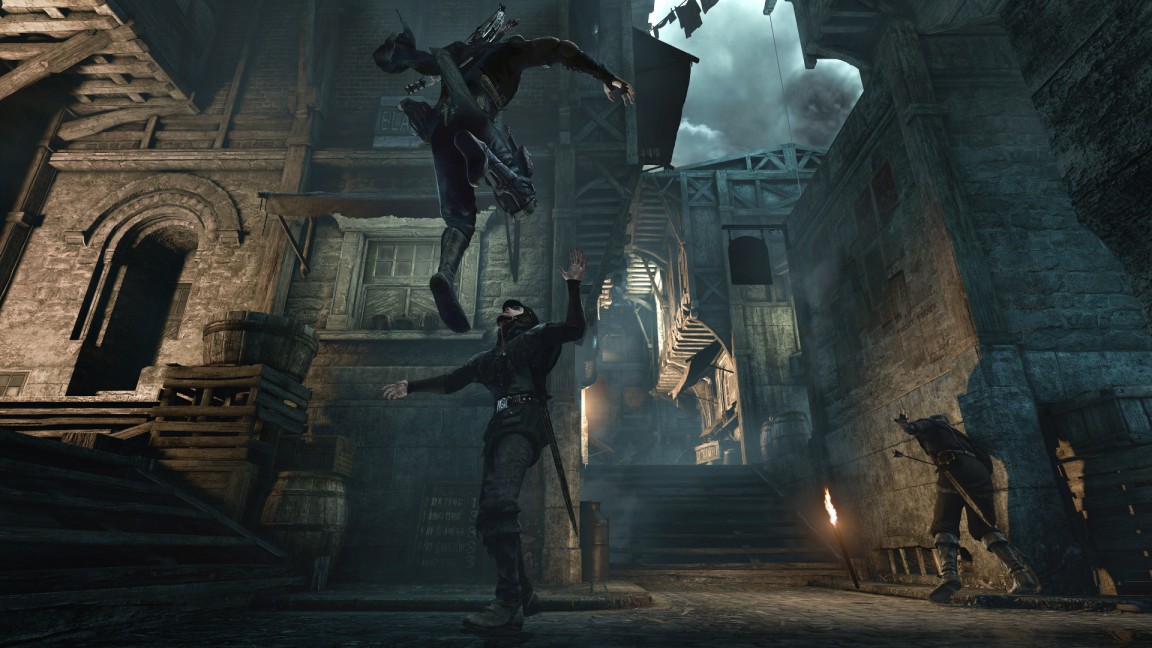 The AI awareness system follows the tried and tested formula of starting at a default state that elevates to suspicious and then fully alert. This progression is marked by an eye meter above a character’s head that fills up when they spot something suspicious; like a master thief skulking about in the shadows. Garrett is a wanted man, so it’s at this point that they’ll start to come snooping about and if you’re unable to evade detection they’ll go into full alert mode, which results in them calling for help and giving chase.

”Often, the level of polish doesn’t matter to the wider success of a project but here it feels more important. The success of Thief as a concept is based on small margins and in a game where you can expect to spend a lot of time studying the AI, how that AI behaves in any given situation is key.”

For the most part, this works as expected and it’s enjoyable to toy with the guards through a combination of deception and misdirection using classic Thief staples like the noisemaker and water arrows. However, as Khoury concedes, there’s further optimisation to be done in this area and so it’s unsurprising that during a two hour hands-on there are a few moments when the AI behaves in a less than intelligent manner.

While I’m confident that many of these will be resolved through play-testing and polishing, there does seem to be at least one scenario in which it’s possible to exploit the AI based on the way the world is constructed. Entering a building via a window triggers an animation that seems to render Garrett invisible to the AI – or else time stops – and so he cannot be spotted for these few seconds. As many of the outside and inside areas are separated by loading screens, and as Garrett’s going to be utilising an awful lot of windows, this could cause some unpleasant consistency problems.

An exception to this potential problem is found in the structure of the side quests. The one I played through involved a separate area of the city that, certainly in this demo build, seemed to exist purely for the purpose of this optional objective. Here, the whole area was pre-loaded, including both interiors and exteriors, which meant there was no loading when entering a building and the AI was persistent. It was also interesting to note that I was issued several challenge objectives specific to this side quest, such as stealing all the loot in the area and remaining undetected throughout.

How Eidos Montreal deals with the challenge of AI out in the wider city, where it has less control over what the player might do at any given time and which of the many buildings they might choose to enter, will be an important factor in determining how satisfying Thief feels to play.

Often, the level of polish doesn’t matter to the wider success of a project but here it feels more important. The success of Thief as a concept is based on small margins and in a game where you can expect to spend a lot of time studying the AI, how that AI behaves in any given situation is key.

On a positive note, Deus Ex: Human Revolution proved that Eidos Montreal it’s entirely capable of delivering a satisfying stealth experience that incorporates player behaviour and robust AI. Therefore, if the overall quality is present in Thief it will be easier to forgive a few minor missteps by the city watch.

There’s a lot to be hopeful of for Garrett’s return but as any master thief knows, critical assessment and careful deliberation remain necessary in order to ascertain that what we have in front of us is the genuine article and not a shiny, hollow forgery.