The Witcher 3 came out over five years ago, and yet eagle-eyed fans are still uncovering incredible secrets in its wide and wonderful world today.

One such secret involves Kaer Trolde, which is the first area you're tasked with visiting after arriving in Skellige. It is here that you reconvene with Yennefer and meet your old pal Crach an Craite, who is in a bit of a sticky situation, to say the least.

I have put a significant amount of time into The Witcher 3 and can hand on heart say that I never even knew this secret existed until I saw it shared on Reddit earlier today. Check out the post below, which features a screenshot of a functional elevator at Kaer Trolde.

I probably have even more hours in The Witcher 3 than the poster and this is the first time I have ever seen this elevator. I thought I had exhausted every little intricacy in CD Projekt Red's leviathan RPG, and yet there is always one more secret to be uncovered, one extra detail that everybody missed - or maybe it's just me.

Another Redditor in the comments mentioned how similar this is to finally learning you can fast travel to any harbour from anywhere in the sea, provided you're in a boat. Admittedly, I knew this one, but probably not until my second playthrough. One person in the comments says they've clocked 314 hours in The Witcher 3 and knew about neither of these, which must have come as a bit of a shock.

If you're planning on finding this hidden elevator, one of the users in the comments has provided the following directions:

"If you go to the inn, just go north towards the bridge and hopefully you'll see it. Not the best description I know but you know it when you see it. Just don't stand under it when it's on it's way down, learned that the hard way." 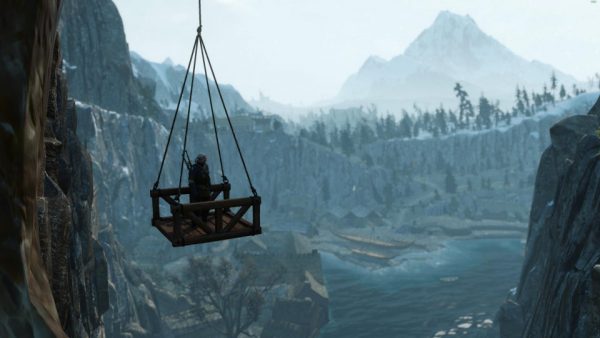 Apparently there are a few NPCs standing around it, and it's at the very end of the river - as clarified by another commenter.

If you're in the mood for more Witcher, be sure to read our interview with CD Projekt Red about other secrets in The Witcher 3. One of the most interesting things about this interview is that CD Projekt Red is considering revisiting Ciri’s story in future Witcher games.