The Sims 4 was unveiled last month and with it, an emphasis on emotion and relationships. VG247's Dave Cook speaks with Maxis to understand just how dramatic things will get.

I cannot stand soap operas, I'm not sure I 'get' them. The cast of Hollyoaks look like a bunch of mad shaggers cast from the Argos catalogue's home section, the lack of chin on Coronation Street's Gail Platt keeps me awake with fear at night, and the name 'Ian Beale' reminds me of a local family butchers.

But there's something endearing about the that particular blend of drama isn't there? Can we safely say we've never become even an iota interested in what's happening during a soap when they happen to be on the TV? I'll admit that even I peered up from my laptop and watched in awe that time Phil Mithchell burst on screen with a wooden bat and started trashing some poor sod's flat like some crazed roast potato. Many of us can't escape the daily soaps, while others welcome it.

Even with a soap on as background noise, there's something engrossing about the dirty little secrets and personal dilemmas faced by characters who are supposed to be ordinary people like you or I. That seems to be the emotional connection many of us can relate to in soaps, and this is the exactly what Maxis is looking to replicate in The Sims 4.

Dismal wallpaper will give your Sims a case of depression, knocking ten shades of shite out of a punching bag will help them unwind after a crappy day, while attraction towards other Sims can send their hearts racing in a whirlwind of emotions. I spoke with Maxis producer Grant Rodiek to find out more how these changes in attitude will create dramatic situations in your Sim's home.

"Emotions have come about through a lot of iteration," Rodiek told me. "We've done three Sims games in the past, we've been making games for a while now, and we had to really sit back and think about ways to make our Sims more interesting, make our strategy more interesting. The emotions came about because we realised our Sims have pretty much always been on this very binary line of they're either happy or not happy."

This sliding scale of generic emotional states was key to Rodiek and his team. How could Maxis take that spectrum of feeling and fan it out into something less predictable, more tangible and most importantly, dynamic? Different things impact our mood and see us through those difficult moments in our day, just like a great day can spoiled by some unexpected bad news. We're complex beings, after all, and in the new SmartSim engine, Maxis was able to translate those feelings into gameplay. 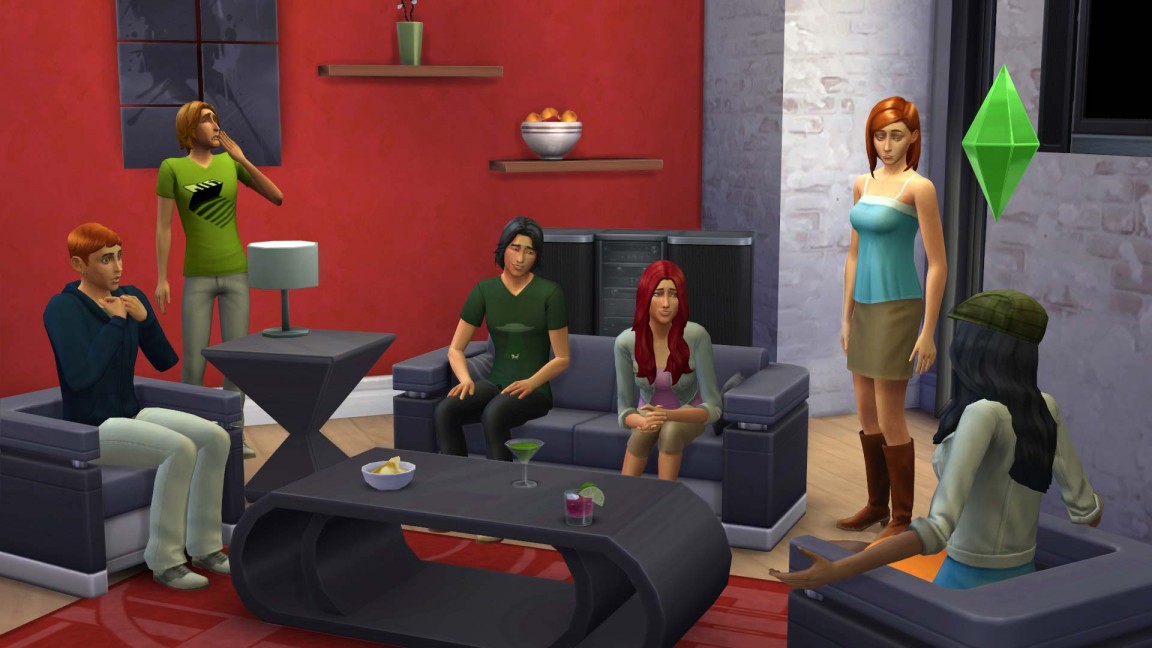 "We realised we'd accomplished a lot of things," Rodiek continued, "but we hadn't really tackled that issue yet. So for us it was just a natural step to take it, and as we prototyped it, experimented with it, it really just came to life and there's a lot of natural design there that we don't have to reach for. It just sort of makes sense, and people understood what we were talking about."

It all makes sense when you see SmartSim running. The scenario we were shown involved a love triangle between a dating couple and a jealous flatmate. Both of the guys entered into a war of emotions to try and get the girl, starting with the single bloke playing some woeful violin to try and make his competitor upset and lethargic. In revenge, the sad boyfriend stabbed a voodoo doll of his mate to turn him into an unattractive ball of rage, ruining his mojo and his chances of a date.

The system seems complex, and Rodiek explained that while the mechanic took many years of iteration and discussion - pretty much from when The Sims 3 first launched - emotion was always the area of improvement that came out on top. Now it's finally in place, the fun can really begin at Maxis. "We put in a lot of technology, a lot of foundation work, "Rodiek explained, "and now, basically our design team is just going wild. They're like kids in a sandbox.

It gets deeper too. Say you plonk a sad painting into your Sims home and have a resident look at it. Some of them might be saddened by the image, but that sadness may inspire them to get artful and create a masterpiece, while others might just sulk around in a mood for a bit and have a pretty crappy day.

Rodiek explained, "We want to give players a lot of ways to mitigate and manipulate the emotional content of their Sims. The one thing that's really key for us is that being an negative emotion like sadness or depression or boredom is not negative gameplay-wise. I know in previous games if you're Sims were happy they succeeded more, and if you're Sim was not happy they succeeded less. 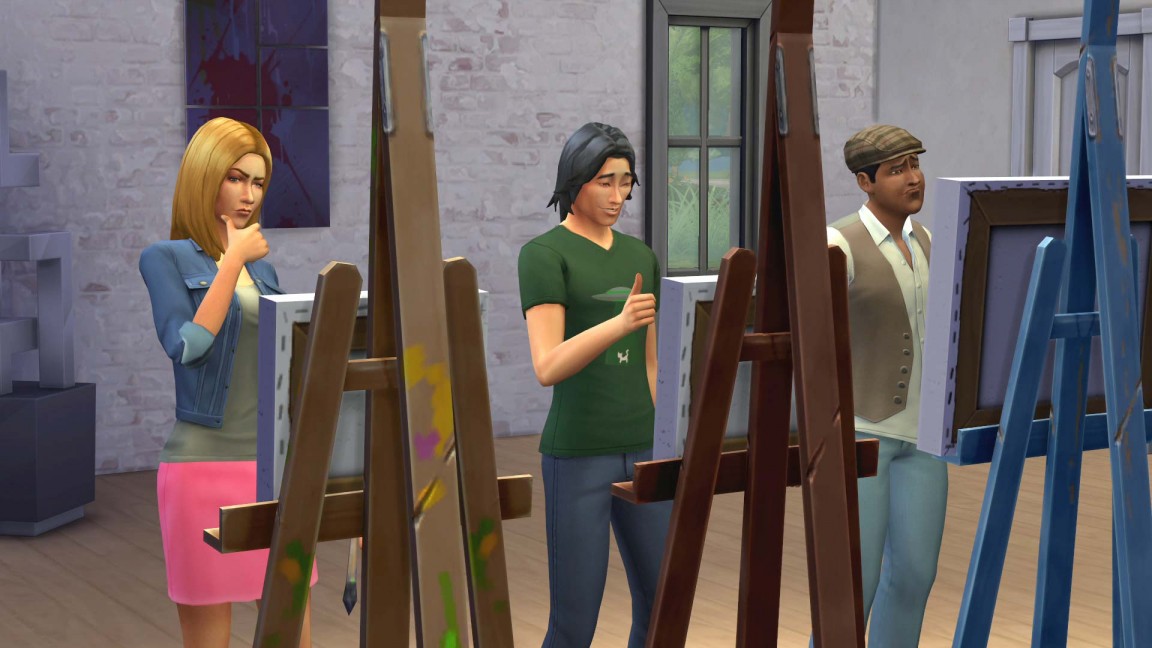 "We realised if we went down the path of exploring these deep emotional states, and that if we just made it so that sadness is frustrating and not fun, that game would be terrible and nobody would ever want to be sad. Sadness now is not negative, it's a different palette of choices. We change your choices like - for example - if you're really sad you can't ask someone to go 'Woo-Hoo'. You may not be able to propose to someone but you'll have other options.

"You might be able to create a masterpiece you wouldn't be able to create otherwise. So we have all these other stories you can tell, but you can also - like you saw with the boxing on the bag - find ways to solve it. It's almost like a goal where you say, 'right, I don't want my Sim to be angry because I really want to have this date go well.' So you can go and solve it. It's a challenge you can work through and that will create a story on its own. As you get more objects, you'll find more strategies to go about it. But we want that to be an exploration and to be fun while you're doing it."

Make no mistake; this is a deep, complicated system that adds a random element into what has largely existed as a rigid patch-work of linked, understandable mechanics. It could be a real game-changer.

Speaking of rigid: it's natural that games like The Sims come with an array of HUD markers and progress trackers, but with SmartSim, there's no need to blatantly shove mood meters in your face whenever your resident enters a certain mental state. You can visibly see an upset Sim slumping as they walk with an upturned mouth and sullen eyes, just like you'll see an enraged character stomping around in a fit of fury. It's both hilarious and at times, a little bit sad to see.

What I found most important here was the way the room full of press I was in let out various 'awws' and 'umms' whenever emotions flared on screen. They got invested in what they saw. They rooted for the sad, ousted boyfriend to cheer up and get his revenge on the conniving singleton threatening his relationship. They cheered when he finally got the girl and blasted off into space with her in their rocket for some interplanetary 'relations'.

They become emotionally invested in what they saw, just like a soap opera, and that is quite interesting to see.

Disclosure: Dave honestly can't stand soaps despite knowing - through third-hand knowledge - who a lot of the main characters in UK soaps are. He feels dirty but no matter how much he scrubs, the stain of Eastenders and its brethren just won't wash out. Send help.