Dying Light is the cross-gen survival horror title from Dead Island studio Techland. VG247's Dave Cook plays it and talks with Przemyslaw Mróz about the importance of knowing when to flee.

Dying Light is a new game and not to be confused with the Dead Island universe. It's set in the sprawling city of Harran months after a zombie outbreak.

This trailer shows off some of the parkour stunts you'll be doing in the game.

We covered the game's initial reveal and first details here.

I was only a few minutes into my first hands-on experience with Dying Light when it started to feel like a visually enhanced version of Dead Island. The demo started me off in a survivor's compound where, thanks to a makeshift obstacle course made from pieces of wood and crates, I was able to test out Techland's new free-running mechanic

Parkour - at the start of the game at least - seemed to involve simple jumping and hoisting actions which, while hardly shaking up the blueprint, certainly added new scope to Techland's design. Although I enjoyed the original Dead Island, its successor Riptide gave me an unpalatable sense of deja vu, so by this point, I was growing worried that Dying Light had boiled down to more of the same with a jumping mechanic thrown in as a moderate enhancement.

But then night time came, and suddenly everything changed.

As per its moniker, Dying Light is a game that places its day-night cycle at the fore of design. During the day you're encouraged to venture out into the sprawling open world in search of missions, but by night the play-space becomes a killing field where only those with fleet of foot will survive.

While Dead Island's playable cast pegged as survivors, they were more like superheroes capable of cutting through hordes of the undead without too much trouble. That air hostess blade-master certainly didn't seem helpless by any stretch of the imagination.

Here, you're on the back-foot constantly, and running into a pack of zombies will leave you dead in moments. I quizzed Dying Light's international brand specialist Przemysław Mróz about the game's core design philosophy, differences against Dead Island, and how the ever-ticking clock feeds into the player's survival.

"Dying Light is a brand new IP," he began. "It is set in a different universe [to Dead Island], it has different protagonists, but most of all it offers a completely different experience gameplay-wise. It is first person and it has zombies in it, but that’s as far as the comparison can go. Dying Light is an action survival game, so you have to use all of your strength, agility, and intelligence to survive and succeed.

"The game design is broad enough to support many gameplay styles. Gamers will be able to fight, run, use things in the environment or gadgets in their inventory, all for the sake of survival We try to create situations that always give you lots of options to choose from, you’re never constricted, you’re always have that freedom to do whatever you want. In fact it allows you to traverse through the world in a way that makes it difficult for you to go back to ordinary FPS games." 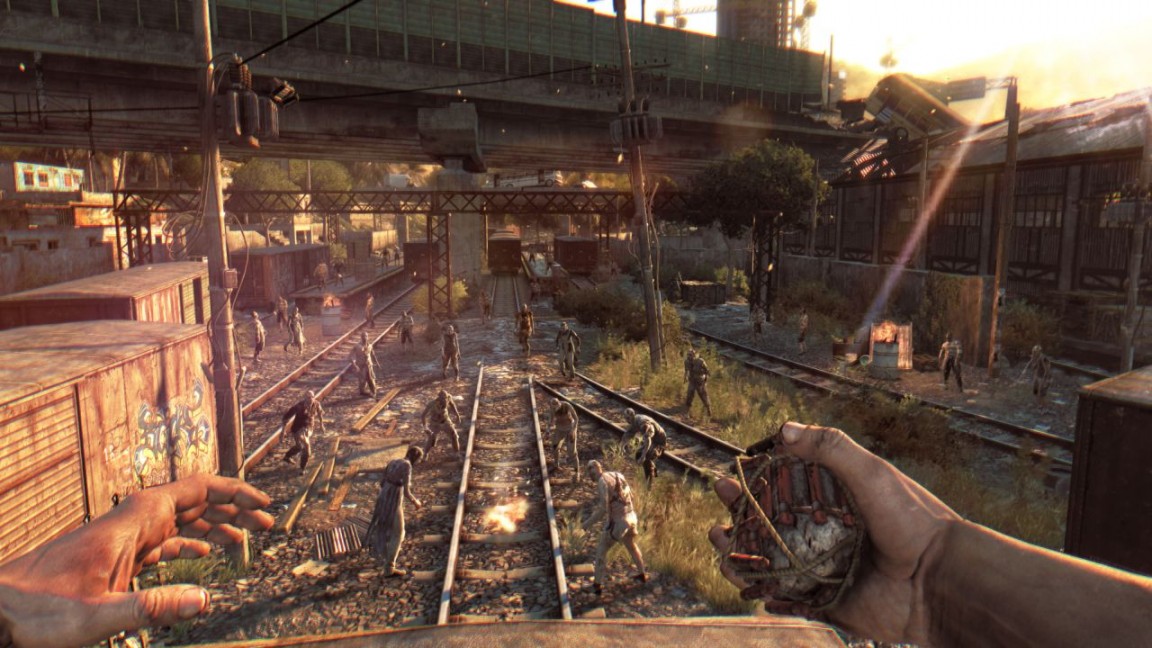 Indeed, as I explored the city of Harran, with its multi-culturally influenced zones - inspired by the likes of Istanbul, São Paulo and beyond - I noticed several electric circuit breaker boxes dotted across the environment. My mission was to activate a perimeter of these devices far across the map, but Mróz assured me to stop and turn on every single one I saw. I was puzzled, but he assured me I'd need them once the night rolled in.

So off I went, sprinting across rooftops and leaping over streets while a sea of undead surged below me and I noticed the horizon steadily growing darker with each passing minute. I finally arrived at my objective and set about a small pack of zombies with my wrench, but not without receiving a heft dose of damage in the process. After activating the circuit breakers, I was advised to trigger a nearby car alarm and use it distract any nearby zombies. It gave me a window to sprint back to home base just as night struck, followed by an almighty roar from the horrors that started flooding the city.

Before I dig into what happened next, it's important to stress that Dying Light is an open world, four player co-op experience like Dead Island before it. The city is massive and gives you and your friends room to tackle objectives in many ways, typically using the environment and sound to your strateguc advantage. Mróz was more than happy to shed more light onto the true breadth of the project from a multiplayer perspective.

"Dying Light is a sandbox experience," he explained. "You can play it the way you want to play it, so yes, you can totally go in different directions, complete different missions, do different stuff basically. Depending on the situation sometimes it might be better to stick together and sometimes it’s just better to split. For example, one person goes for the mission objective while the other runs for an air-drop before it gets stolen.

"You can imagine many teamwork scenarios though. Say there’s four of you playing and you come across this crowd of zombies blocking a way to your next objective. You can handle it any way you like – you can all go in guns blazing (well, machetes maybe), or maybe three of you can go into the fight and the last guy will just sneak around zombies’ backs to complete the objective silently? Maybe you will just pick one brave soul that will try to draw the zombies away by making some noise, and the rest of you will proceed further on?" 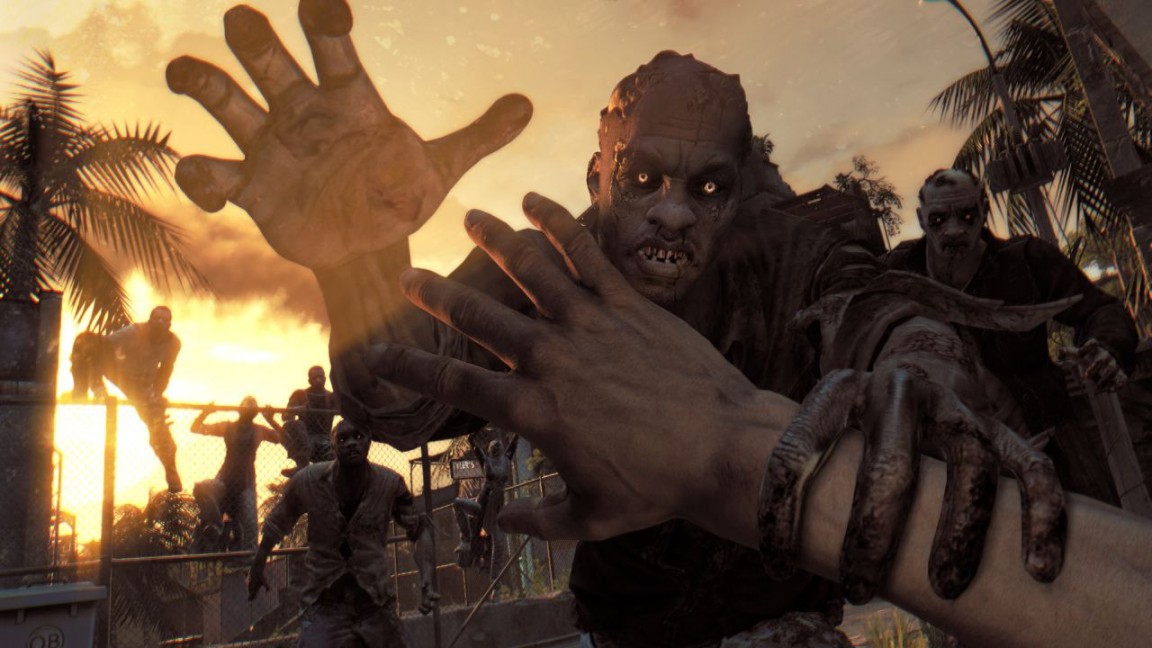 This freedom, and the perils of night are what caused me to think twice about Dying Light as a mere iteration on the Dead Island format, because trust me, when the dark hits you need to run for your life and navigate the maze of roads, alleys, doorways and rooftops to reach a safe point or it's curtains. It's like a 3D game of Pac-Man if Namco's maze was suddenly struck by the T-Virus. You need to mentally map out your escape route as you proceed in the day, and flip it in reverse as you run home.

Dick about like I did - running down dead ends, missing jumps and wasting time in a blind panic - will get you killed without mercy. Throw three other players into the mix and you have a mad, intense, twitch scramble on your hands. It's a similar vibe to those final stand-offs in left 4 Dead, but with one key twist: those electrical circuit breakers I mentioned earlier. These are traps, and they're used during the night to aid your escape back to camp.

As I ran home, Mróz excitedly pointed out that I was near a trap I had primed earlier, but to be honest I was in such a panic I had no clue where I was. With simple button tap I was able to press down on my character's mobile trigger, which detonated a car bomb hooked up to the breaker, evaporating walkers all around me. Later on, I pressed it again to turn on a blinding UV light trap that stunned my pursuers. Finally, with a pack of zombies nipping at my heels, I ran through a metallic door frame with the door lying off its hinges.

I ran through the door frame and slammed the mobile trigger again, causing the breaker to spring to life and the door on the ground to became electrified. It zapped the undead behind me with force, leaving me free to make my last dash to the safe zone. Finally I saw it, as guards outside beckoned me in while screaming at me to hurry. Once inside, the heavy security door slammed shut and the demo cut to black. I needed a lie down.

"Dying Light is by far the biggest and most ambitious game we ever made," Mróz told me, and I'm inclined to believe it. Its running at 60FPS, has a city far bigger than anything Dead Island has to offer, includes competitive play in 'Be A Zombie' mode, and there's a vast RPG skill progression mechanic in there too. At base level it felt like Dead Island, but once the new features became apparent the whole playing field changed. I'll be keeping an eye on this one in case it surprises me again between now and its 2014 launch.