3DS launched last month to enormous fanfare and some large sales, but interest has already vapourised in Japan and analysts are predicting the same for international markets. Are we looking at another GameCube? 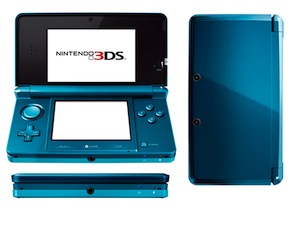 Topped Japanese hardware charts in its first week, but rapidly relegated to second place behind PSP.

Analysts now predict a decline in line with Japan.

Nintendo is behind the two fastest- and best-selling consoles of the last decade, so it's difficult to imagine such a major hardware launch as 3DS simply stiffing. What's the handheld's problem? Why have sales taken a nosedive? What does this mean for the upcoming portable wars - and what about the smartphone threat?

Besides the dyed-in-the-wool Nintendo fanatic, of which there are a significant number, there are two kinds of people likely to consider purchasing a 3DS.

The regular gamer knows all about 3DS already, has likely seen at least one other console launch, and is reasonably likely to pick up a new machine if in a financial position to do so.

The casual or non-gamer outnumbers the first group. This person may already own a DS, a Wii, or even another console. They've heard about this cool new thing, and they probably want to try it.

They may be adults with disposable income or kids keen to get in on the current must-have. This demographic played a significant role in the success of both of Nintendo's previous consoles, and is far larger again that the core gamer demographic.

Both groups are getting cagey about 3DS.

For the regular gamer, who can't walk past a picture of Link without an increased heartbeat, the 3DS's launch line-up is poor going on abysmal.

When the console was first announced, hype went through the roof - while E3 was still in progress, Nintendo released a list of games in progress for the machine, and it was phenomenal. The biggest console launch line-up ever, was the verdict.

A few months before launch, it became apparent that list of games had largely been composed of moonshine and hen's teeth.

A few months before launch, it became apparent that list of games had largely been composed of moonshine and hen's teeth.

For core gamers, Street Fighter IV was the number one draw - it's moved a confirmed 1 million units - followed by a slew of Ubisoft ports, some nostalgia-trading, and a couple of series more easily and beautifully available elsewhere.

What does 3DS have to offer to rival the home system? Portability, of course, which leads us to our next problem: battery life.

Five hours with everything turned down is just about feasible, except that by switching off 3D and StreetPass you've basically got yourself a glorified DS with better graphics. Which highlights the question: why do you need one?

The effect is already public: sales have faltered. The early adopter has adopted, and it hasn't adopted as hard as Nintendo had hoped. US sales are estimated to be 500,000 at launch, but analysts are warning that demand has dropped.

NoA has claimed 3DS has a Nintendo handheld launch record in the US - DS sold 500,000 units in its American launch week at the end of 2004 - but has failed to provide numbers. We may never know a final figure: NPD doesn't issue hardware reports any more.

Screen Digest has warned that, in its opinion, 3DS will fail to come close to DS's success, saying it expects 69.9m 3DS units to be sold by the end of 2014: DS had moved 90.9m by the same stage in its lifecycle.

Nintendo UK claimed 3DS had higher release sales than both Wii and DS, releasing an internally-produced figure of 113,000 units for its British opening weekend.

The UK press has been all over the machine's launch, with the Sun claiming 3DS is seeing record return levels in Britain, a report Nintendo has staunchly denied.

Japan is better, but it's clear demand has been nowhere near as high as Nintendo expected. 3DS sold 400,000 units in its opening weekend in Japan, but it was reported around six weeks later by Media Create that only half the launch allocation has been sold, leaving more than 600,000 Japanese units in stores.

Obviously, it's unclear as to whether this situation has be exacerbated by the recent tsunami in Japan.

Yes, it's sold. No, it hasn't sold enough. And yes, Nintendo really is facing problems with 3DS.

There are undoubtedly difficulties pitching 3DS at the core. What about that huge pool of purchasing power in the mainstream? These people aren't keen, either. They've heard the same things core gamers have about the battery life, and while the available games may seem more appetising to them, they're much more easily frightened off by the 3D horror stories.

Has anybody not heard them? 3DS causes headaches. 3DS makes you nauseous. 3DS can leave you dangerously dizzy and with blurred vision. 3DS shouldn't be played by small children. 3DS hit my husband with a frying pan and stole his wallet.

The tabloids are having a field day with it. Even putting sensationalism aside, the reports are so prevalent as to be obviously worrying.

Turn the 3D off then, and, as before, you're left with a glorified DS - something the mainstream is even less interested in than the core gamer.

And it doesn't stop there. It's not a pretty device. Its overhanging lip doesn't disguise the fact that it's basically a square clam shell. It's got a stylus - someone call 1999 - and it's really too large to fit comfortably in a pocket.

Why would you, oblivious to the charms of Nintendo properties like Mario, drop a couple of hundred bucks on this when you've already got a smartphone?

Nintendo head Satoru Iwata made an impassioned speech at GDC this year, which boiled down to an accusation that mobile, social and indie development is undercutting software prices in the games industry.

This is bollocks. Portable gaming is going down the drain financially because neither platform holder offered a compelling enough hardware experience with the software to back it up.

To say the least, DS sold like hotcakes: it's moved 150 million units to date. But then, it launched in 2004, before anyone had heard of an "app store," and its catalogue ultimately turned into a crowded minefield of overpriced shovelware. People stopped wanting to pay for those tiny bits of plastic in enormous cases for use in their oversized consoles, when they could download an app in moments - to a device they carry out of perceived necessity.

Nintendo chucking a public tanty doesn't change this, and its tactic with the 3DS has largely been to cover its eyes, rock back and forth, and scream for it all to go away.

Not a compelling argument. Hear the one about the senior Nintendo UK PR quitting for Apple? It's got a killer punchline.

The NGP is revealed.

Not so Sony, the core portable rival. If there's one thing Sony understands, it's that devices have to be sexy, and it's got not one, but two extremely attractive portables in response to the current climate. The Xperia Play and PlayStation Suite answer the question of how to pick up a piece of Apple's market, while the NGP looks set to answer all the 3DS's failings.

It looks like the kind of device you can produce in an adult situation and not feel a berk, as SCEA boss Jack Tretton vocally agrees. It's got a number of different controls, including twin sticks, the long-hindering omission of all portable consoles so far.

It's got a line-up of games we've already seen in action. It's hooked into PSN, which Sony continues to expand and is showing sensible innovation in developing cloud services. It's got a beast of a machine inside that sleek exterior. It's promising social and inter-platform connectivity.

What's the 3DS got? It's got glasses-free 3D, a USP which requires the device to be stationary, and, according to the press, makes your brains come tumbling down your nose. And it's got Zelda and Mario - soon.

NGP is certainly not a confirmed win for Sony, as the platform holder will have to deliver on price and catalogue, both historical weaknesses for everything PlayStation. But at this time, NGP's already looking like a more sustainable model than the 3DS simply because, on paper at least, it had modern appeal.

The closest you'll get to Ocarina Of Time
right now.

Nintendo needs to act quickly, something it's not famous for. Bad press on the 3D effects needs to be countered immediately with some hard data. We need a hardware revision which looks less like My First Console and can be relied upon to stay charged for a whole commute.

3DSWare needs to launch immediately, and it needs to deliver. How did Nintendo not perceive a robust online service as essential to a portable launch in 2011? Nintendo must promote digital content much more wholeheartedly than it did before, and harvest its back-catalogue at prices attractive to those who already own six copies of Mario games.

Third-parties need to be wooed, and once captured, put under the thumb; Ubisoft's spamming of rushed ports isn't improving the console's reputation by failing to live up to its already-minimal hardware potential. 3DS needs unique experiences beyond the ability to make you cross-eyed, and it's not going to get it by shoving major franchises into a tiny box.

If the behemoth cannot be turned at this stage, we'll have another GameCube on our hands. Nintendo isn't adverse to dropping hardware support, and we're all aware of it. That thought lingers in the front of the mind every time I reach for my credit card, before putting it firmly away.