Early on in your adventure through The Outer Worlds, you meet an interesting companion: Vicar Max. Where you thought Vicars were the kindly sort, there’s a mysterious edge to Max that hints at something deeper in his past. Once you’ve supplied him with a banned text, he’ll join your crew and give you a quest called “The Empty Man”.

This Follower quest takes you to various settlements across the galaxy in search of answers, and can be completed once you’ve bought the Stellar Bay nav key from Gladys on the Groundbreaker.

However, you can make progress towards completing The Empty Man as soon as you reach the Groundbreaker after leaving Terra-2 for the first time.

The Empty Man is best completed as an Intelligent character with high Perception, but can be brought to a peaceful and satisfying conclusion either way.

Once you can lift off from Terra-2 following the events of “Comes now the Power”, you will be able to fly to a space station called the Groundbreaker. Unless you want to make a detour to find the first Science Weapons from the Void in Phineas’ Lab, of course.

When you touch down on the Groundbreaker and leave The Unreliable, you’ll walk past an altercation between some corpos and a street kid, Felix. Speak to Felix sympathetically and you’ll be able to recruit him as a companion for your crew later.

Your task on the Groundbreaker is to steal a data cache with the last known whereabouts of Reginald Chaney, a scholar Vicar Max needs to translate his banned text, encrypted on it.

The cache is found in the security office located just behind the customs desk on the station, and you have three options of how to proceed:

Sneaking around the back of the security office is probably the quickest way to acquire the drive, but also the riskiest and most difficult.

Outside the customs desk, and to the left, there’s a side door next to where “13” is painted on the wall. 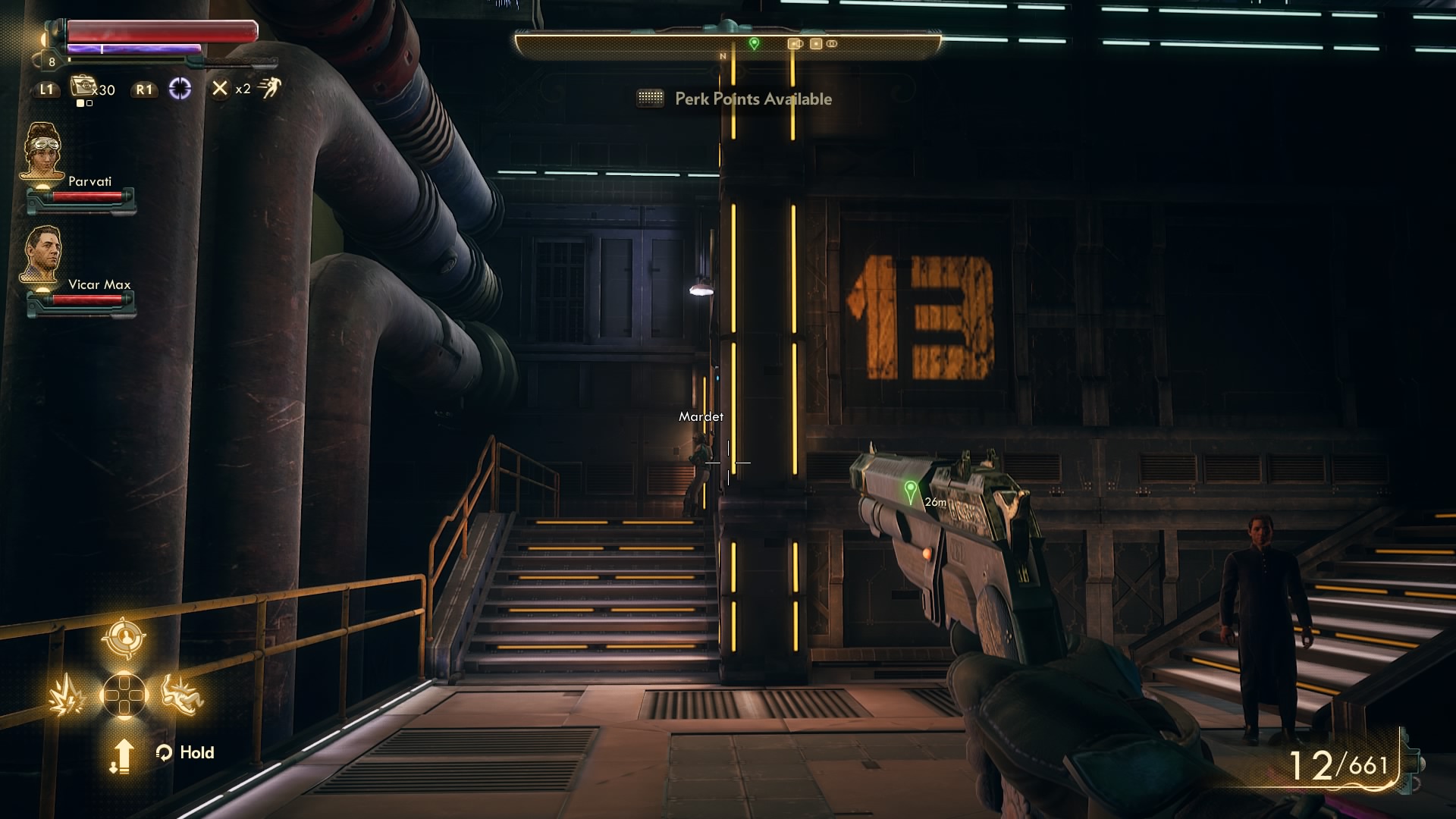 You can unlock this door and sneak around to where the terminal is, but I wouldn’t recommend it.

Grabbing an ID and using a disguise is much easier.

The Mardet ID is found just to the right of the security desk, on a shipping crate. 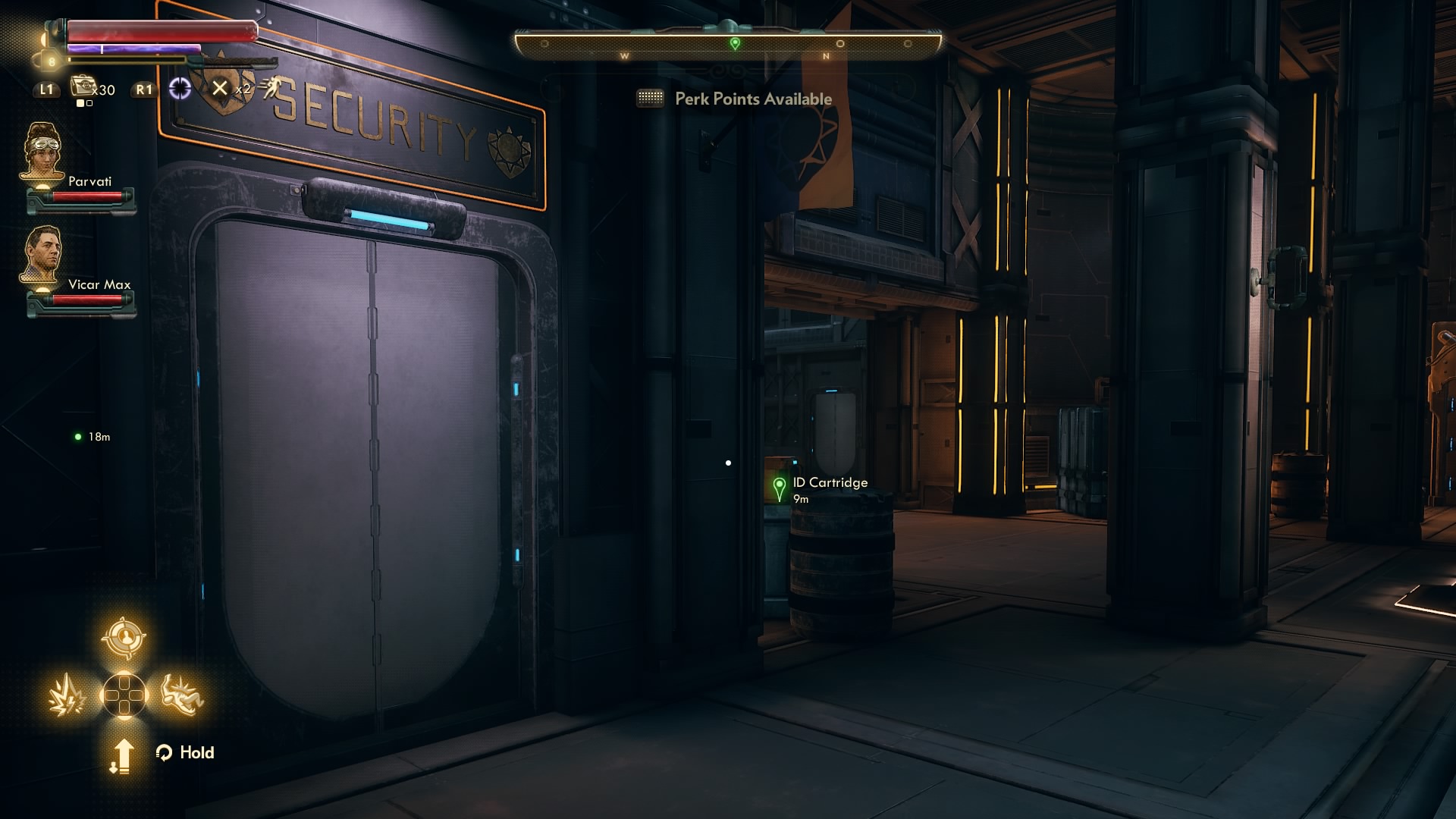 Pick up the Mardet ID and walk through the door that says “Security” over it. Now when you walk through the “Restricted Access” sign, you will automatically be disguised and free to walk around. 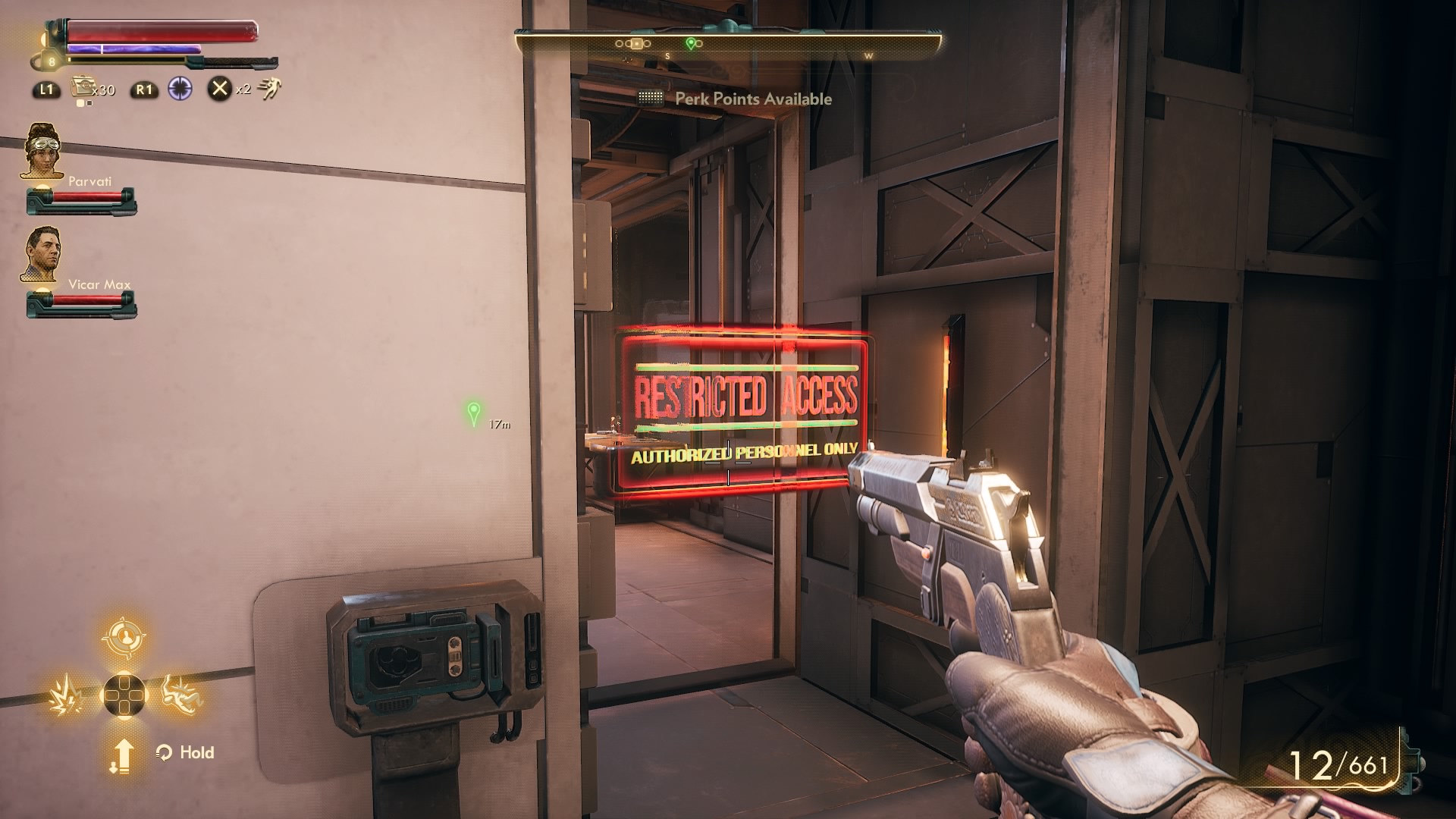 Don’t run or jump though, this will weaken your cover. If the meter at the bottom of your screen runs out, guards will be able to see through your swiz and engage you with a dialogue check that you need to pass to stay hidden.

Act natural and follow the quest marker to where you need to be and steal the cache.

On the right-hand side of the security room glass sits Pvt Lee Flores. Speak to him and say “I’d really like to see back there.”

If you have Persuade 45, you’ll be able to manipulate him into letting you back there. Otherwise you can pay him 775 bits for the privilege. 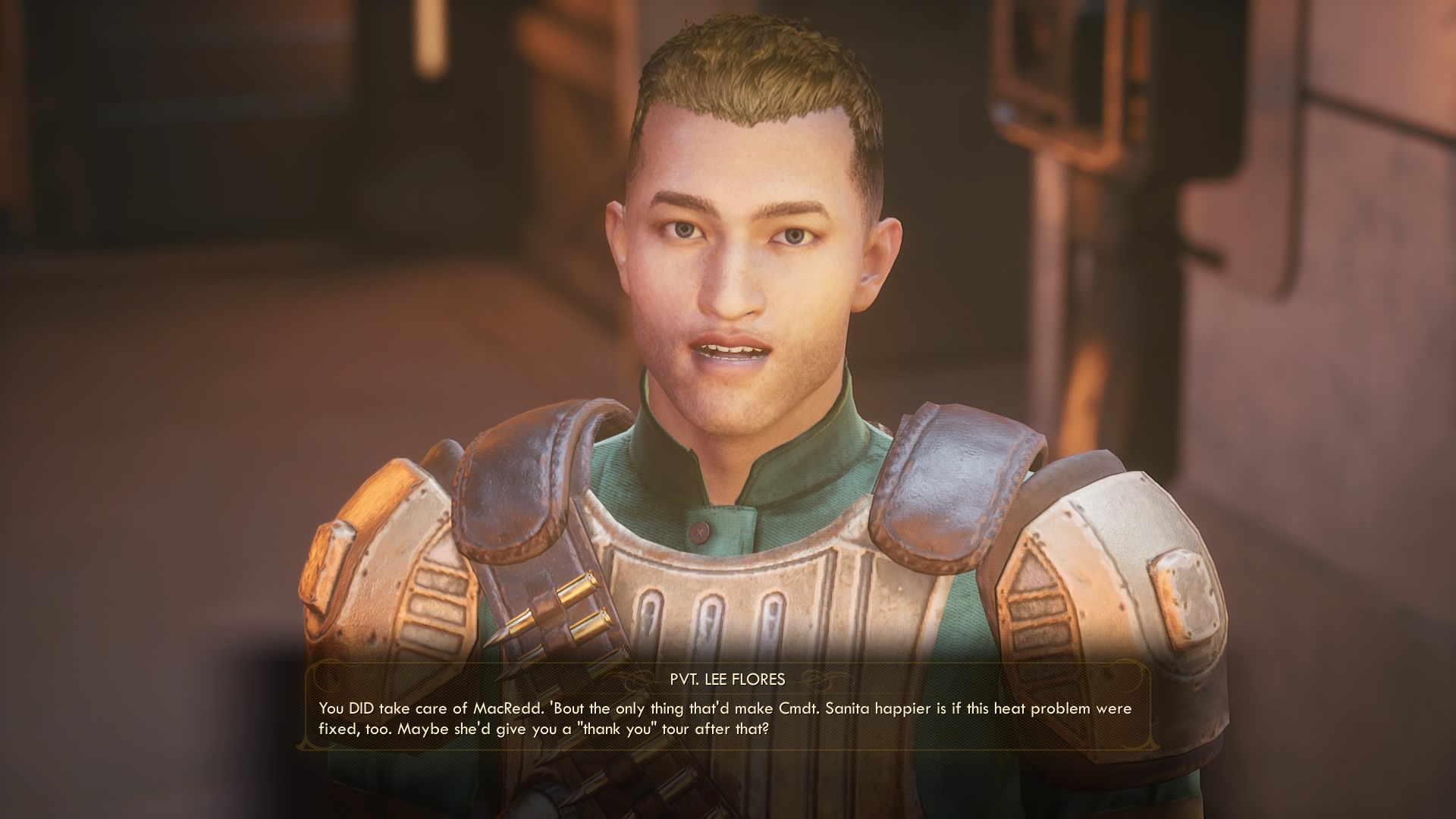 For characters with the means, this is an easy way to get to the data cartridge.

You can reduce the requirements to Persuade 30 if you complete either half of the next option with Cmdt Sanita.

Who Goes There and Happiness is a Warm Spaceship

This method takes much longer, but is more legitimate if you’re role-playing an upstanding character.

Speak to Sanita through the glass at the security post and enquire about the bounties. She’ll send you after the rogue captain Gunnar MacRedd in the Back Bays. 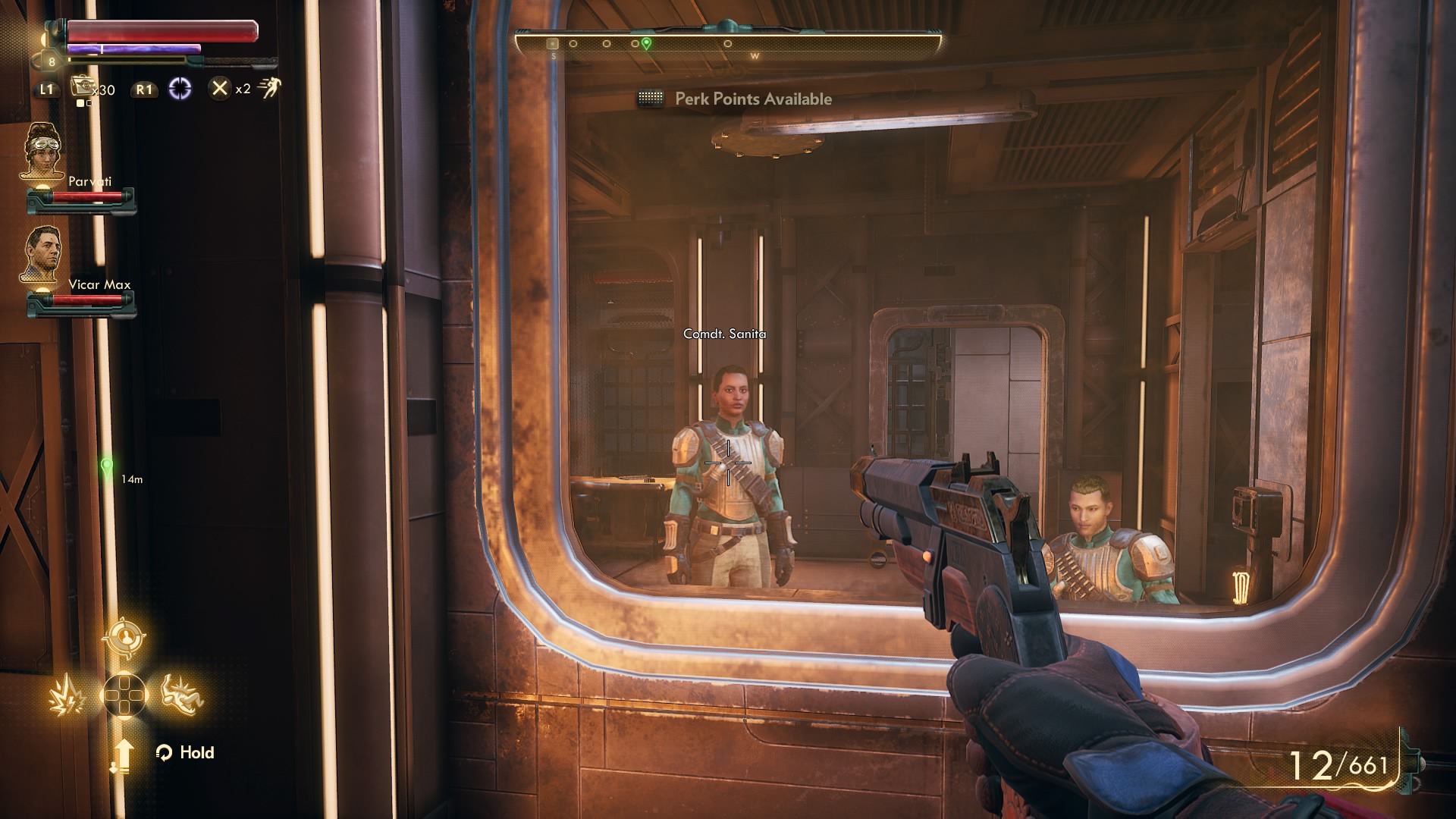 If you accept the posting you can follow the quest marker to MacRedd, who you can either kill outright or persuade to give over his lucky lighter as a ploy.

To get Sanita completely onside, you also need to do the “Happiness is a warm Spaceship” quest by talking to Junlei in Engineering on the Groundbreaker promenade.

Return to Sanita and you’ll be able to ask about going behind the counter for a thank you tour.

Whichever method you choose, head into the security office towards the quest marker. There’s a lockpick level of 30 needed for the door, but this shouldn’t be much of an issue. Having Parvati as a follower boosts your lockpick by 10, and you should have found a piece of armor that boosts stealth skills by a further 5 by now. 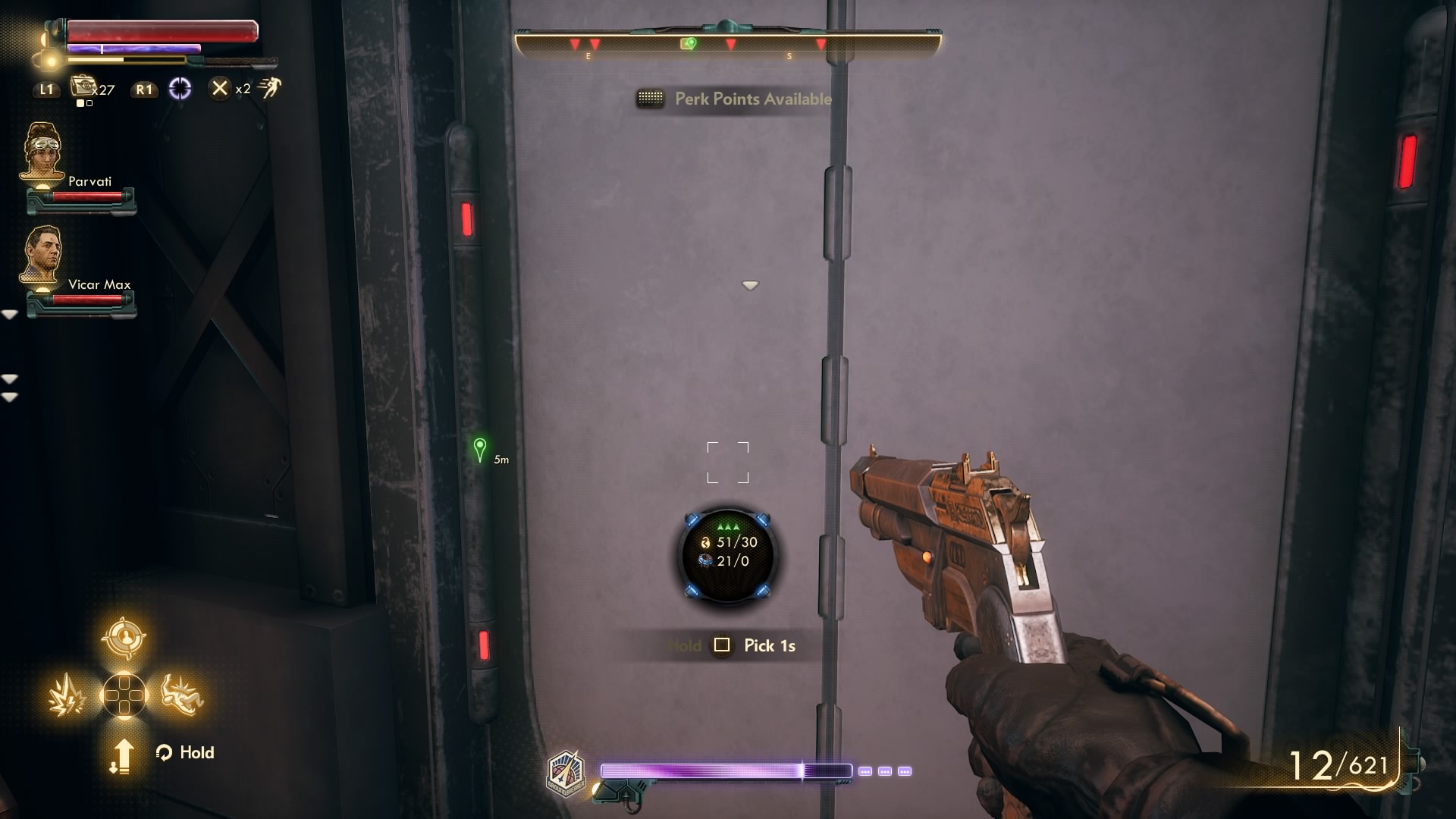 With the cartridge in hand, speak to Max about where you need to go next.

Perceptive characters will be able to get a little more context on why Max is so desperate to find Reginald.

You will be able to get to Fallbrook on Monarch once you’ve bought the Stellar Bay Navkey from Gladys.

From Stellar Bay, head south from the city and to the east. You can follow the dangerous road all the way, past Amber Heights and past the Fallbrook Crossroads. 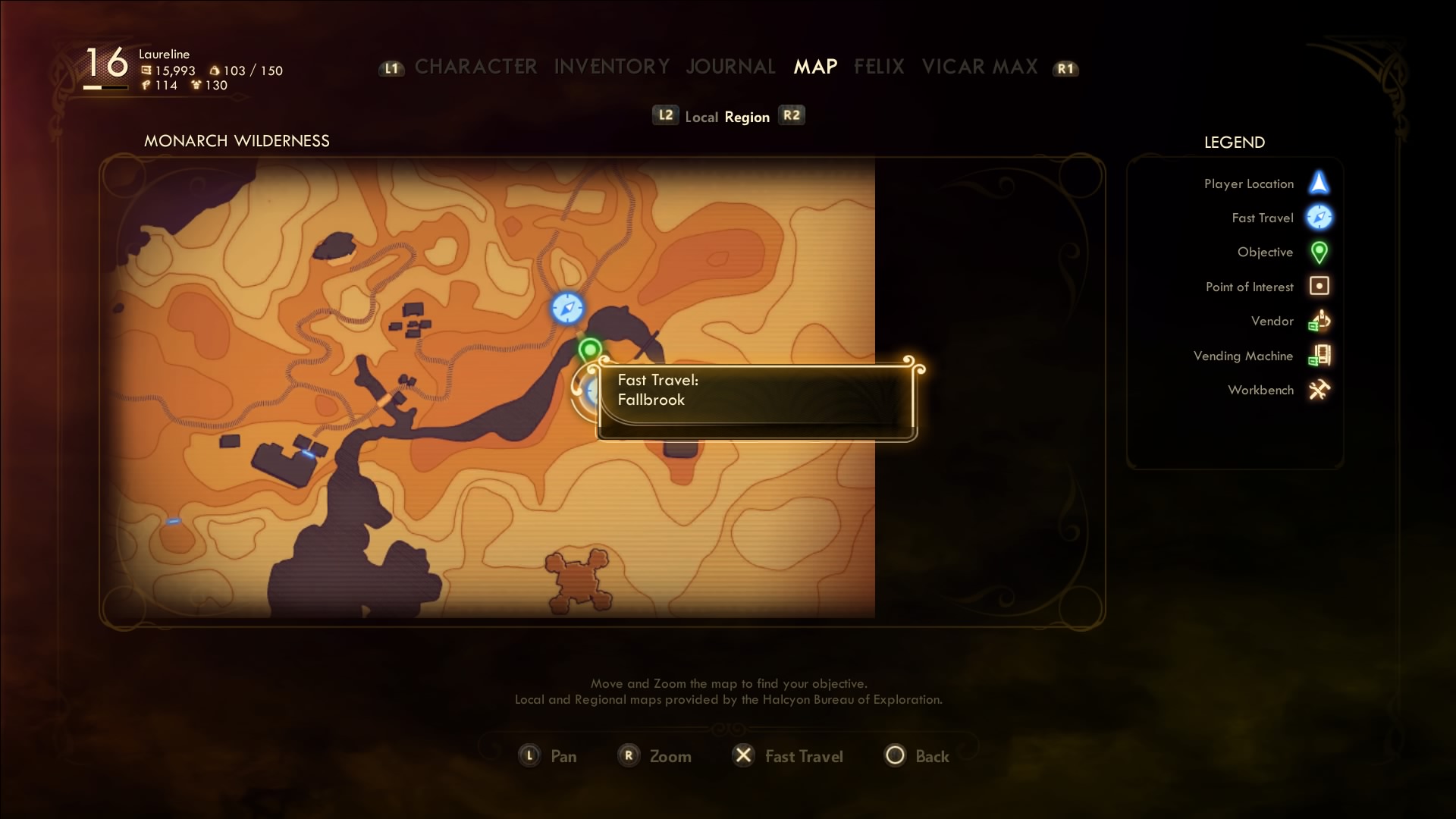 Once you’re there, follow the quest marker to Reginald’s house. He’s not there, so read the highlighted datapad. 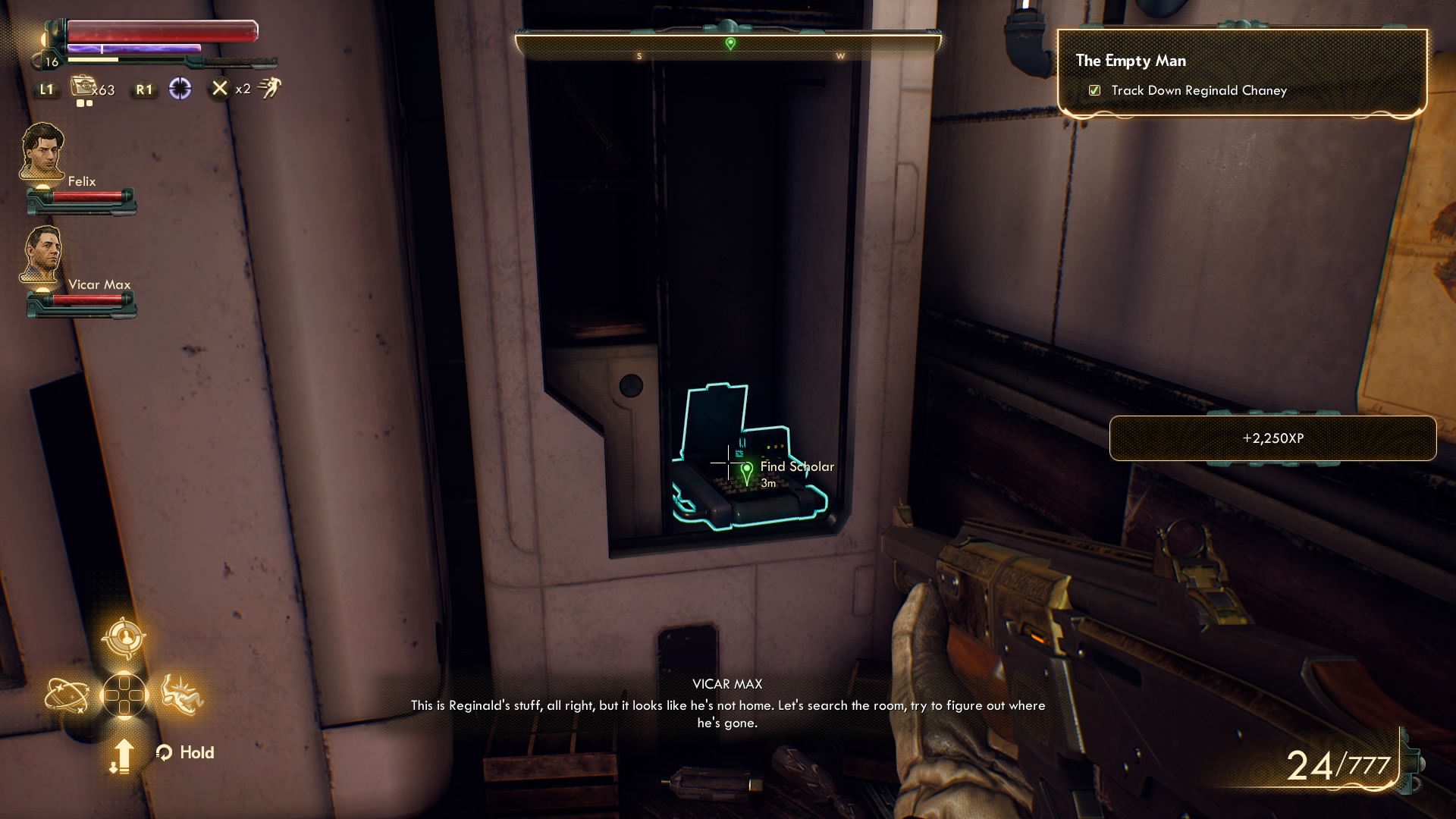 Now follow the second quest marker around the corner and down the river to find Reginald. 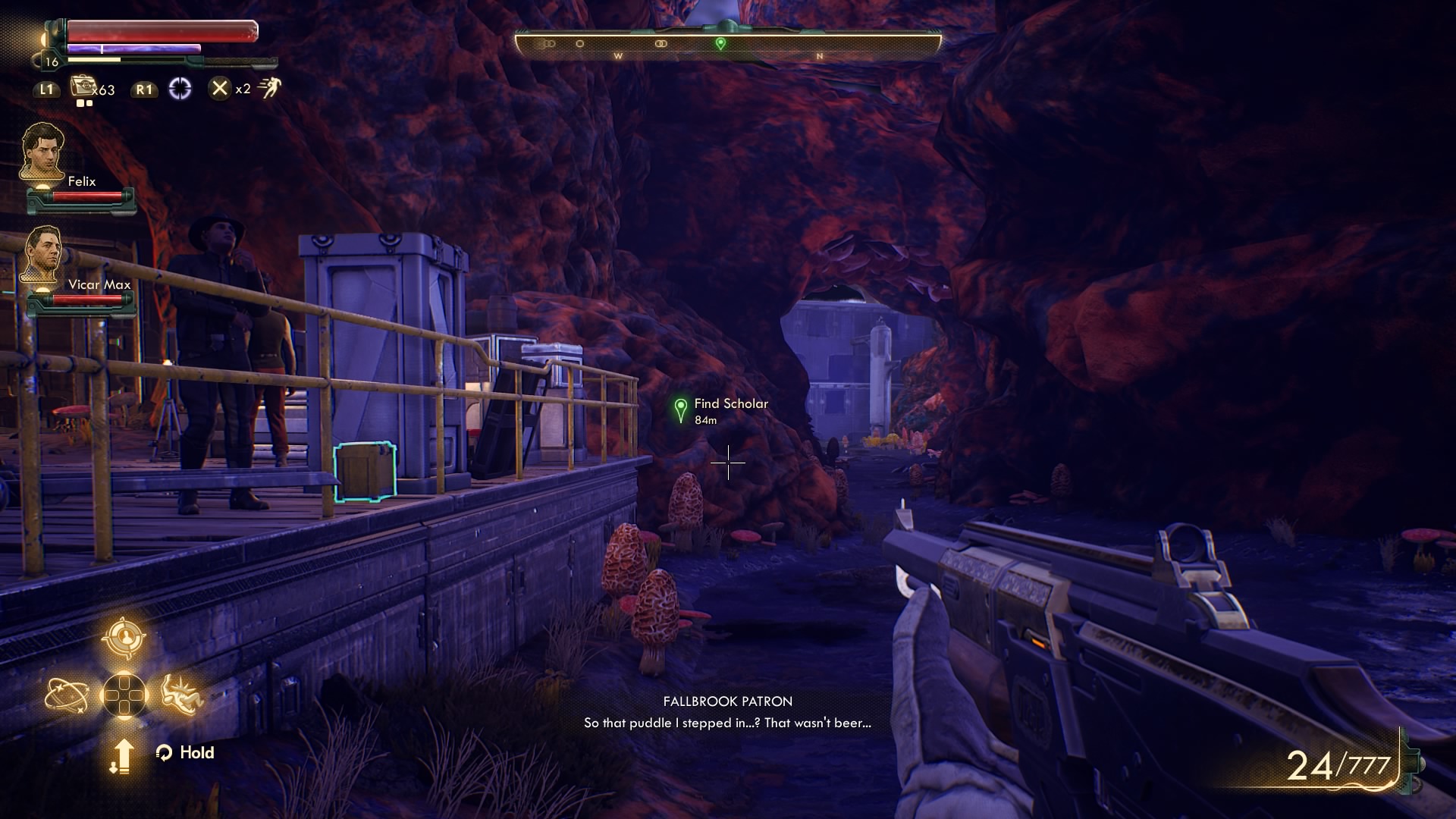 To resolve the ensuing conversation peacefully, say: “what’s going on here”, “you’re going to give up everything….”, then “Max, stop”, and “there”.

Speak to Max again for some background details on his life and the quest at hand, then travel to Scylla.

Once you reach the mining outpost of Scylla, it’s a simple task to follow the quest marker to the extreme east of the area. 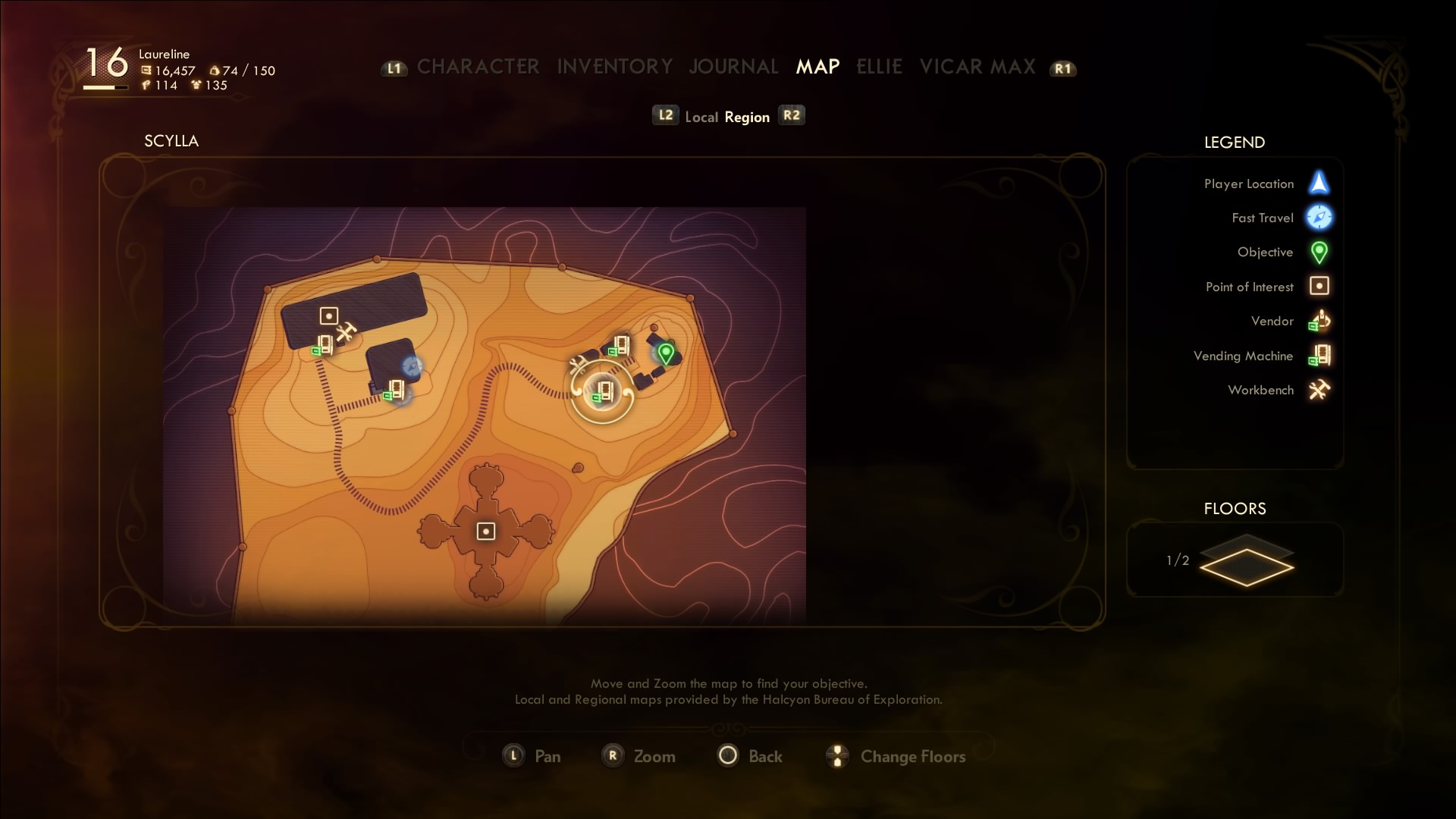 Here, enter the Hermits house and speak to her.

Implore her to help Max with his questions and she’ll offer some “meditative aids”. Agree, and you’ll join Max in his experience.

Go to the other room and interact with the incense burner.

Regardless of your choices, this sequence seems to end in a very similar way. These are the choices I picked to produce a positive outcome:

This completes The Empty Man quest, and is one of the requirements you need to fulfil to see the best ending in The Outer Worlds.

You not only receive a ton of bits and XP for your trouble, but a unique object for Max’s room on the Unreliable.