The Legend of Zelda: A Link Between Worlds suggests that some things should be left untouched. Stace Harman gives his impressions on Nintendo's latest in his full write-up. 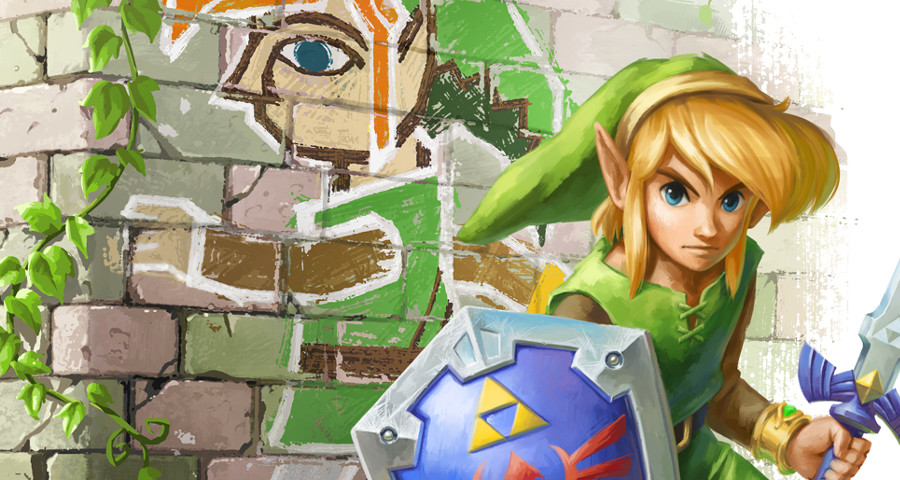 A Link Between Worlds

Zelda producer Eiji Aonuma has previously stated that A Link Between Worlds is a deliberate attempt to try something new with the Zelda formula.

The game has a snazzy Music Box special edition available via select retailers, as well as a dedicated console bundle.

Aonuma has also been discussing the slight amendments made to the 2DS version of A Link Between Worlds and acknowledged that, overall, “The game itself is designed so that it’s quite easy to play, and quite easy to proceed...”

The Legend of Zelda: A Link Between Worlds launches on 3DS and 2DS in North America and Europe on Friday November 22.

Playing through The Legend of Zelda: A Link Between Worlds has been a story of mixed emotions, with some wonderful touches tempered by missed opportunities and genuine joy rivalled by unmet expectations.

In fairness, not all of the blame can be laid at the feet of the game. I came to A Link Between Worlds excited by the prospect of a sequel to A Link to the Past, which remains one of my favourite Zelda games. Nintendo has since bettered it in design terms but the memory of experiencing A Link to the Past during my formative years remains one of the most enduring video game memories of my childhood.

With this to live up to, A Link Between Worlds was always going to struggle to evoke the same emotional response but what I’ve been surprised by is how hit and miss it is from a design perspective, too. It features functional but unspectacular use of the touch screen for map and inventory duties, some compact dungeon design and a critical path that can be blown through quite comfortably over the course of a weekend.

Equally, while some of its 3D elements are very well implemented they are rendered ultimately superfluous to the experience by the necessity of having to function just as well in 2D. In all, A Link Between Worlds feels less accomplished a use of its host platform than the last original handheld Zelda title I played, which was 2007’s Phantom Hourglass.

There are two main design choices that have affected the overall structure of A Link Between Worlds. One is its headline unique selling point: the ability to merge with a flat vertical surface to become a 2D drawing and so move around corners, through narrow gaps and past many obstacles. This is responsible for many moments of “Ah-ha” game design, especially in the opening hours as your brain adjusts to the potential of this innovative mechanic and your eyes get used to scanning the edges of a room for clues or the unbroken run of a flat hillside for potential secrets.

While merging remains key to several of the game’s puzzles throughout, there’s one early temple and a boss fight later on that use it to particularly excellent effect. Its painterly art style is made all the more appealing by A Link Between World’s otherwise generic cartoon appearance and, in reality, so much more could have been made of it.

In several places, it feels like it has been artificially limited and so its use often feels proscriptive. It is primarily used as a method of traversing between the light world of Hyrule and the dark kingdom of Lorule – through specific portals – and it’s a shame that the game finishes before its potential has been fully explored.

The second key design decision affecting A Link Between World’s structure concerns a staple of the series: Link’s burgeoning inventory. Soon after the game starts in earnest a merchant appears who offers first to lease and then to sell you a number of familiar items. Nine objects are obtained this way, from trademark tools like the boomerang, bombs and hook-shoot to newer additions in the form of the tornado rod and sand rod. 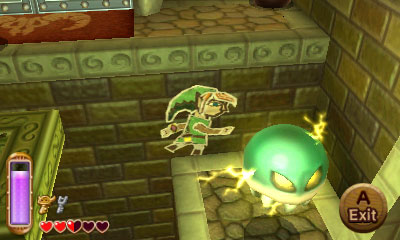 Clever. But is it clever enough?

With relatively cheap rental prices and ample opportunity to obtain rupees it’s not long before you possess a suite of weapons and tools at your disposal. The only caveat is that upon hitting a Game Over screen all of the items that you are currently renting are returned to the merchant and must be paid for again (for reference, my end of game stats told me that I’d died six times throughout my entire adventure, although this refers only to full “Game Over” and does not include having a bottled fairy on hand to revive you).

This glut of equipment allows you to head into the dark world and tackle all but one of the seven sage temples in any order, which certainly facilitates a flexible approach but is so open a format that it means that there’s virtually no built-in difficulty scaling.

As such, you’ll breeze through the dungeons you decide to tackle last on account of having a great many more hearts and having had the opportunity to pick up one or two special items along the way. Upon completion, a Hero Mode is available to make enemies tougher but had some of the side-quests been better integrated as a way of obtaining necessary cash, the whole thing would have felt more coherent and less haphazard.

On a personal note, it’s also jarring to see iconic heirlooms cheapened by an in-game monetary system. Sure, there are occasions when it feels like Nintendo is making sly observations about the wider industry trends of DLC and micro-transactions but by the end of the game it just feels like they’ve taken a shortcut to make things deliberately more accessible and in doing so have lessened the satisfaction of earning rewards.

Parting is such sweet sorrow

A specific mention must also be made here about the amount of content on offer. Due to a corrupted data file, which Nintendo has assured me is the only reported case in the whole of Europe, I lost several hours progress and was convinced that I wasn’t going to reach the end of the game before writing this article. I needn’t have worried; while I haven’t sought out every heart container or hoarded every collectible, I’ve completed the game with lion’s share of inventory and gear slots populated and had time to sample several of the mini games to boot. 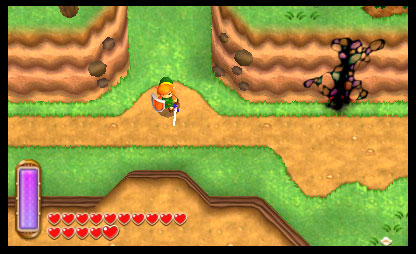 This image has nostalgia written all over it.

For a Zelda title it feels slight (the ability to warp at will around the map undoubtedly expedites the whole experience) and this is most readily apparent in the dungeons. While a few exhibit some strong design elements, none feel epic – not even the final one. In fact, most are on the small side and a few even commit the cardinal sin of being almost instantly forgettable.

In many ways, this adventure around Hyrule lives up to its title. It feels like a link between the world of Nintendo’s usually impeccable design and that of less capable designers who often seek out shortcuts. Zelda producer Eiji Aonuma has admitted that he’s wanted to try something new with A Link Between Worlds but that something has resulted in a coarse mix of old and new. Its brilliance is all too fleeting and so instead of evoking appreciative wonder while it lasts it simply makes me sad for all the places it hasn’t gone.

It’s tough for Nintendo, because in many ways it has a design standard to measure up to that is not always applied with the same vigour to other developers. But it’s a standard of its own making and while it has moments of greatness A Link Between Worlds often feels like it’s standing on the shoulders of giants. Sadly, it’s not the link to my past that I was hoping for.

Disclosure: To assist in writing this piece Nintendo sent Stace a download code for The Legend of Zelda: A Link Between Worlds on 3DS.