Among the obsolete relics of the old world littered across the tumbledown cities of The Last of Us Part 2, there are, occasionally, working guitars nestled among the rubble.

After putting in a shift dealing with hordes of Infected ravaging long-abandoned coffee shops and laundromats, I stumbled upon one of these instruments and decided to bash out some comfort tunes. The results were pretty solid.

I started off by trying out some simple but sombre Pink Floyd cadences, before moving on to the more raucous riffs of the Red Hot Chili Peppers. I’m not going to lie - it was pretty tough. However, after a while of experimenting with The Last of Us Part 2's accessibility tools - of which there are over 60 individual, adjustable options - I found a style of playing that suited me. With a bit of practice and a lot of patience, I started to recognize the tracks I was playing for what they were supposed to be, as opposed to sounding like total shit - which they absolutely did at the start.

Here’s a video of me playing with some tunes:

If you're up for it, you can have a go at playing your favourite tracks in The Last of Us Part 2 as well. Ellie's no Hendrix - believe me, I tried a lot of Hendrix - but she knows her way around the first third of the fretboard. From Pearl Jam’s Future Days to A-Ha’s Take On Me, her in-game playing testifies to how much you can do on a guitar with relatively little, especially when you've got three different modes of playing to choose from: vertical strumming on the touchpad, horizontal strumming (also on the touchpad), or tapping, which separates the touchpad into six distinct sections, each one representing a string.

I personally used the third option most of the time because it felt a bit more receptive on a string-by-string basis, and because I kept getting two full minutes into a potential cover before spoiling it at the last second by lashing out a full C chord where an elegant, single note would have done loads better.

If you’re interested in giving it a go but don’t know a whole lot about guitars, don’t worry. If you look up the songs you’d like to play and specifically search for “chord”-based versions, you’ll be able to match the chords in the tab to the chords in the game pretty easily. It might sound a bit basic at times - for example, if you play a chord-based version of Scar Tissue you’re not going to hear all the little nuances - but it still sounds correct. 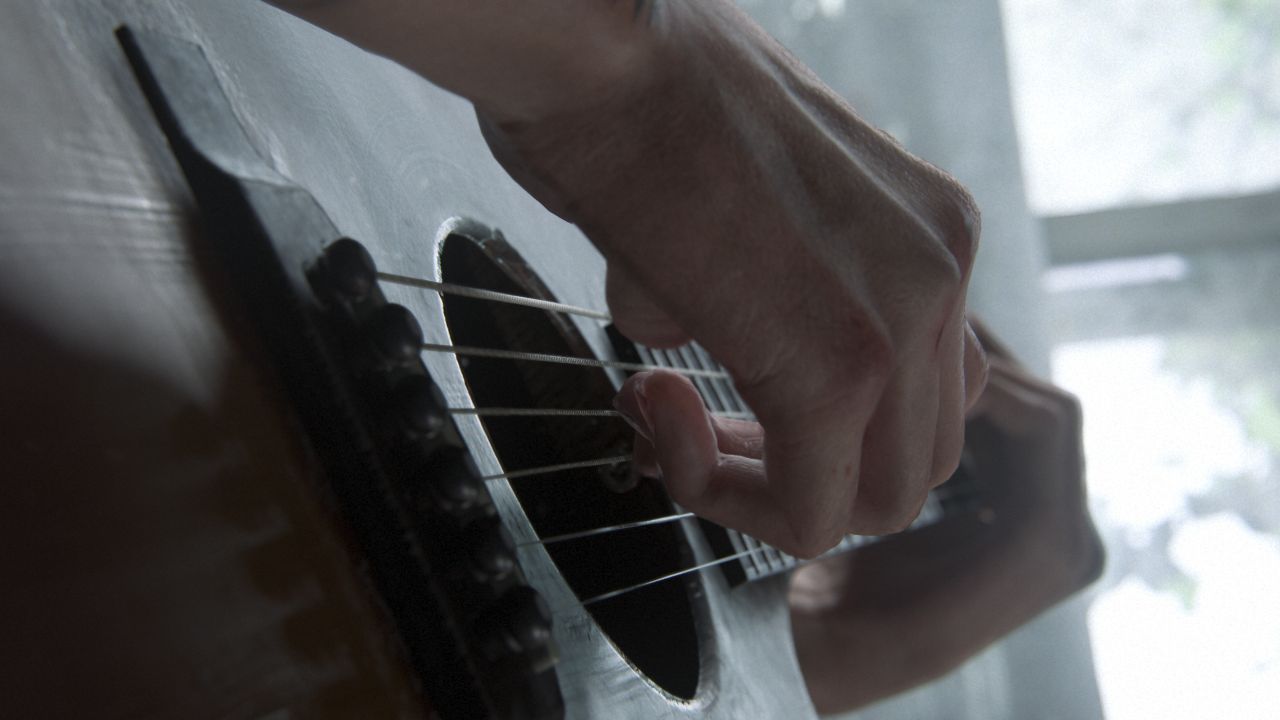 In terms of building on this, once you learn the chords and can easily switch between them without consulting the chord sheet anymore, you can change the accessibility option to “taps” and start to fiddle around with individual strings, as opposed to full chords. This is where you can really make the in-game guitar shine - although, admittedly, some of the more finicky songs can be a bit irritating, especially when you’ve gotten the hard part sorted and end up making a balls of the easy part that follows.

Anyway, in case it wasn’t crystal clear yet, I ended up spending about as much time with The Last of Us Part 2’s guitar as I did with its shotguns, barbed-wire baseball bats, and endlessly fascinating artefacts. You can't lug it around with you - that would probably be a little bit impractical in a world teeming with zombies, both in terms of carry weight and, obviously, noise - but when you find somewhere nice and quiet to practice, it's a lot of fun. And it's especially fun when you start playing in a way where the songs actually sound half-familiar. Makes you feel a bit like Ellie Clapton.

From Chris Isaak's Wicked Game to The Cranberries' Zombie, watch the video above to hear some of the tracks I decided to bash out on The Last of Us Part 2's guitar. I tried loads more, but these were the best ones. Through the Fire and Flames, unfortunately, did not make the cut.